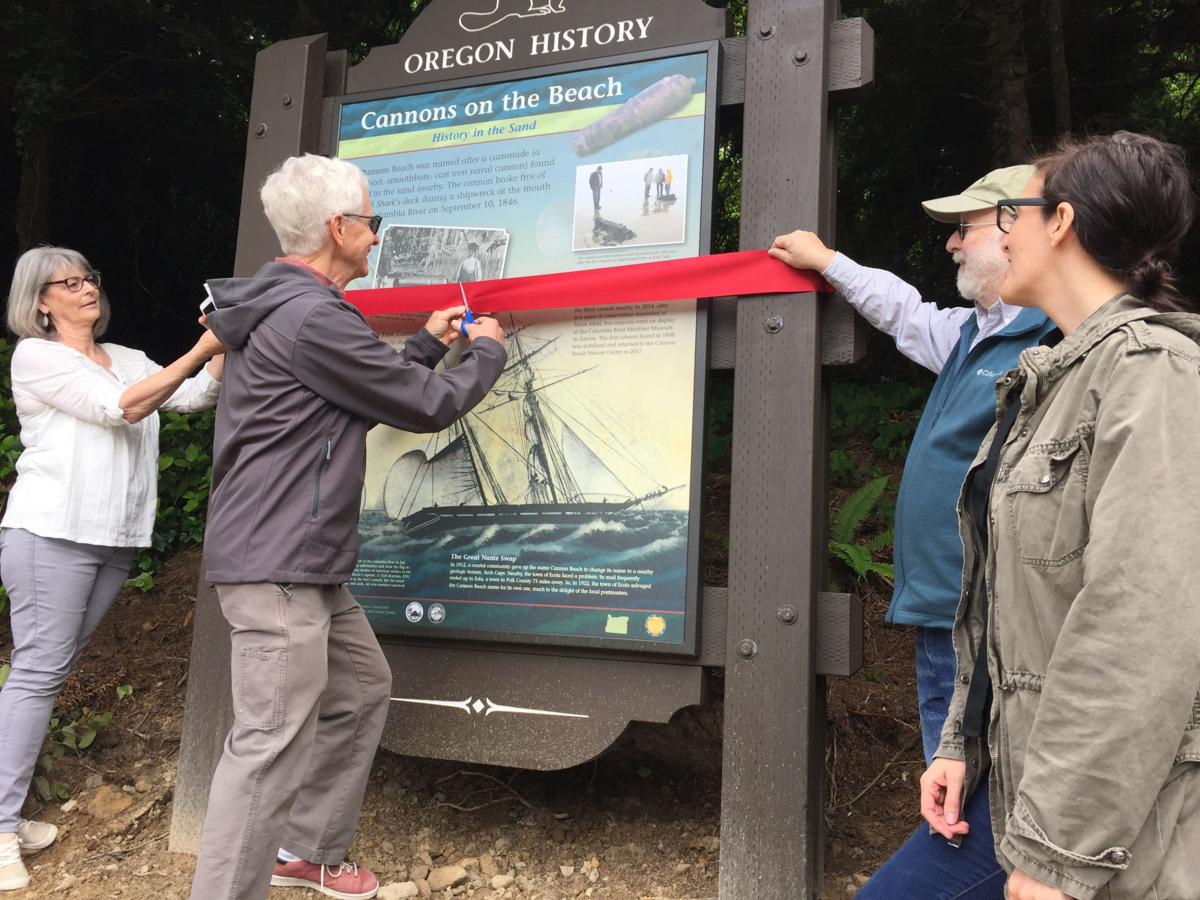 Tara Erben, John Piatt, Bob Keeler and Elaine Murdy at the ribbon-cutting of a new historic marker along U.S. Highway 101 in Arch Cape. 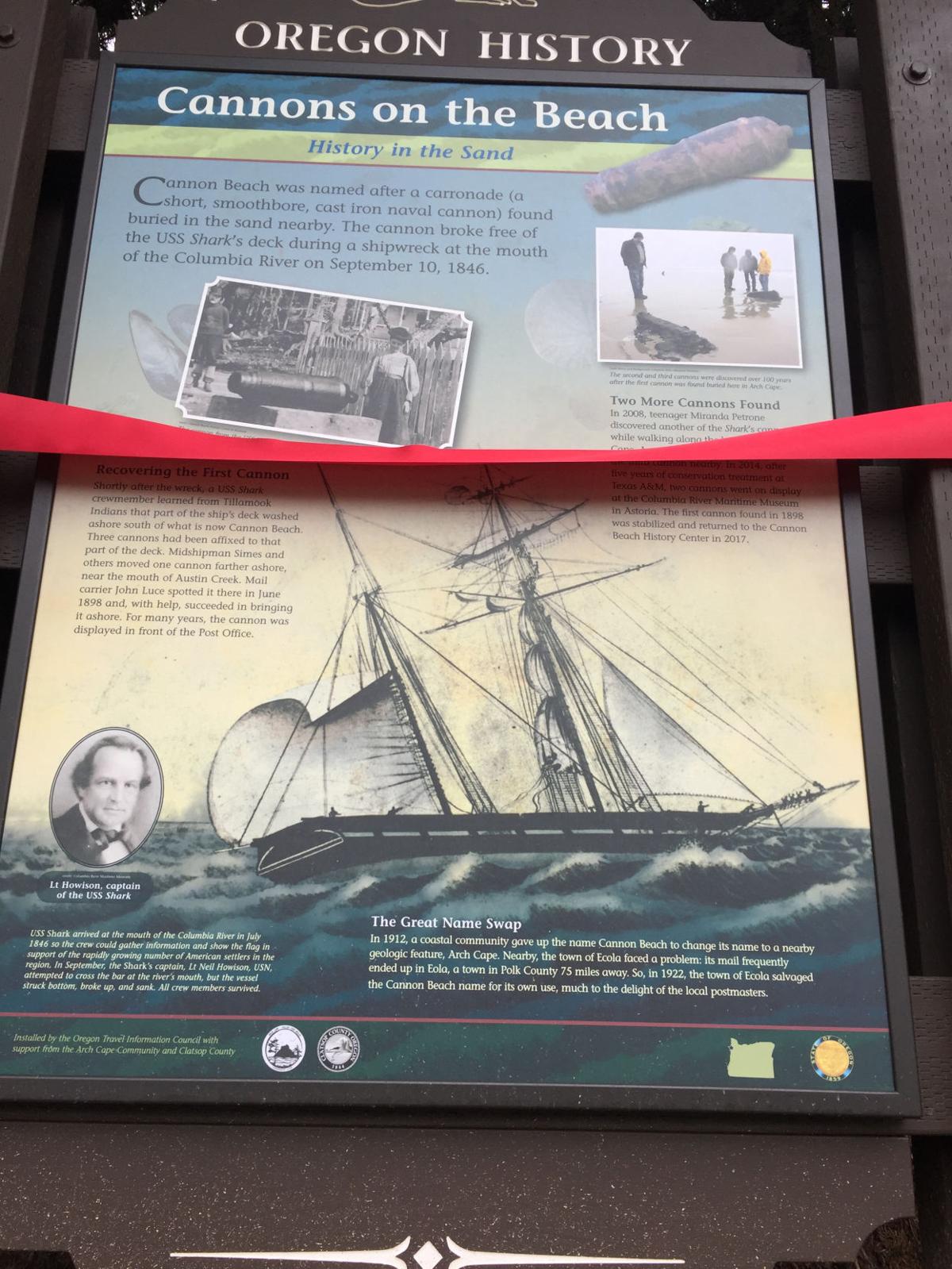 A new historic marker ready to be unveiled along U.S. Highway 101 in Arch Cape. 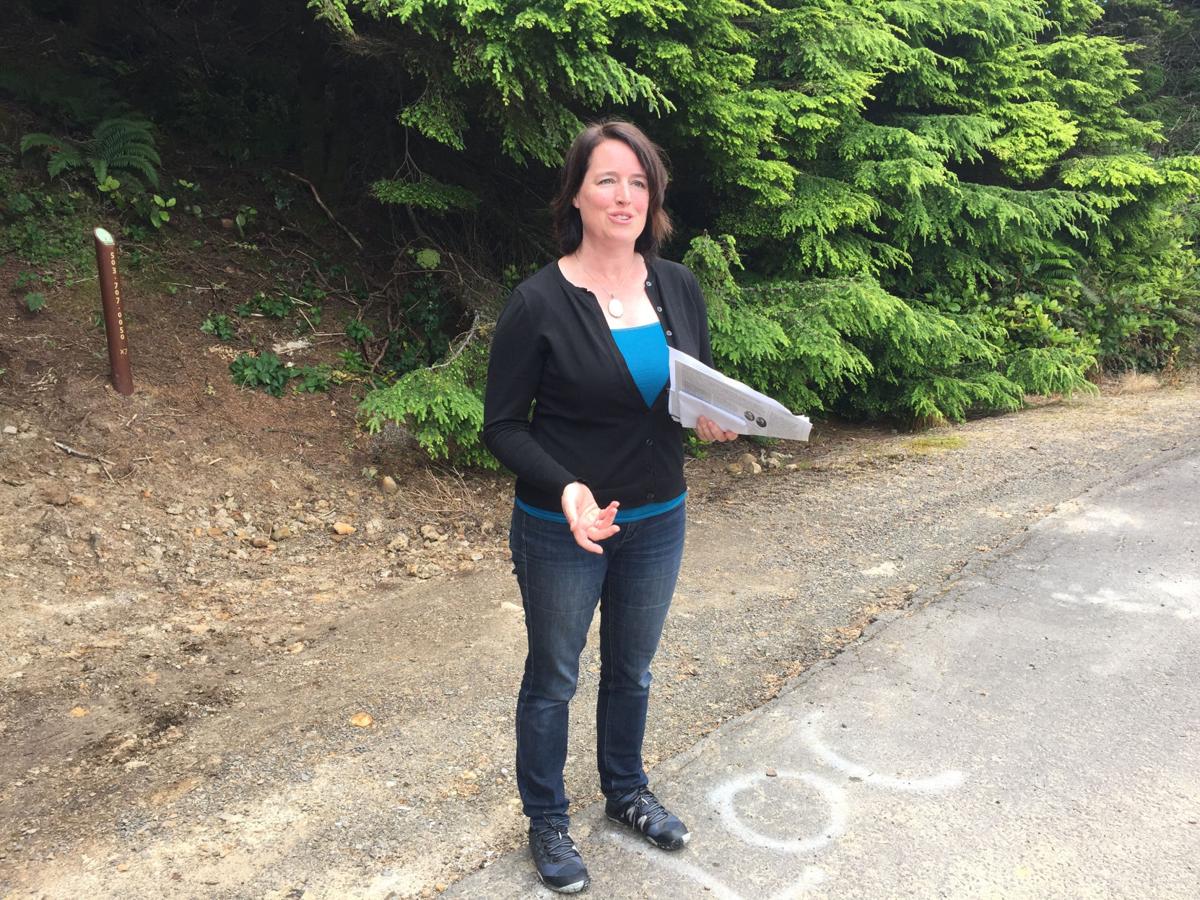 Annie Von Domitz of the Oregon Travel Experience at the ribbon-cutting of a new historic marker along U.S. Highway 101 in Arch Cape.

Tara Erben, John Piatt, Bob Keeler and Elaine Murdy at the ribbon-cutting of a new historic marker along U.S. Highway 101 in Arch Cape.

A new historic marker ready to be unveiled along U.S. Highway 101 in Arch Cape.

Annie Von Domitz of the Oregon Travel Experience at the ribbon-cutting of a new historic marker along U.S. Highway 101 in Arch Cape.

ARCH CAPE — The USS Shark was no ordinary ship.

In the mid-19th century, it was a trusted military vessel that fought in combat and navigated the Strait of Magellan and beyond. But it met its match in Oregon with the mighty Columbia River.

“Everything that ship did is so mind-boggling,” Elaine Trucke, director of the Cannon Beach History Center and Museum, said. “It went all over the globe, then it thought it could do the Columbia Bar! And it couldn’t!”

In an effort to get the Shark off the south spit, the crew chopped down the ship’s three masts and jettisoned the cannons. When the ship began to break up, the crew took to lifeboats and all on board were eventually saved.

The ship’s captain received information from Native Americans that the three cannons had come ashore south of Tillamook Head. Realizing it would be impossible to retrieve the ship’s remains from such a remote location, they made no effort at recovery.

On Friday, volunteers and state officials converged on U.S. Highway 101 just north of the fire station in Arch Cape to celebrate a new interpretative marker dedicated to the shipwreck.

The Shark was one of hundreds of ships sunk along the coast, but one of the most notable — and the one that gave Cannon Beach its name. The new marker stands just north of Arch Cape firehouse, where an original marker was installed in the 1980s. The new marker, made of a wood resin, includes historical information, photos and illustrations recounting the ship’s story.

Annie Von Domitz, of the Oregon Travel Experience, supervised the renovation of the historic marker, in the style of the state’s historic wooden beaver markers. Arch Cape resident John Piatt played a key role in working on the text and drafts, with historical support from Trucke and Jeff Smith, senior curator of the Columbia River Maritime Museum.

The postmortem is as fascinating as the Shark’s career in the waters. Long after it ran aground, the search for the ship’s three carronades — small, powerful cannons used to fire at ships at near range — became a local obsession.

One was found in 1896. Two others were discovered a day apart more than a century later, in 2008, revealed by extreme low tides and the natural loss of beach sand due to winter storms.

Piatt recalled: “The sand was way out and a girl and her dad were out walking and she said, ‘This looks like a cannon!’ A couple of days later someone found the third cannon right near there.”

The restoration of the three carronades became a community project, with the assistance of the Garden Club, the Arch Cape Community Club, Historic Markers Committee, the Cannon Beach History Center and Museum and the Columbia River Maritime Museum.

Funds were raised and the carronades were restored at the marine archaeology department of Texas A&M University before returning to the North Coast. Today, a replica stands at the site of the historic marker. One carronade stands at the history center and two are on exhibit at the Columbia River Maritime Museum.

How did the Shark arrive here? Trucke provided an eloquent recounting of the ship’s creation and its ultimate demise.

The secretary of the Navy in early 1846 sent the vessel to the Pacific Northwest to join the Pacific squadron. The ship’s role was to defend U.S. interests in the Northwest and to spread the concept of “Manifest Destiny” in the Oregon territory when there was doubt about whether it would be British or American land?

President James K. Polk sent the Shark to Oregon in August 1846. The ship, 86 feet long, was designed for speed and maneuverability to navigate the waters of the West Indies.

The Shark’s impressive career saw it transport the naturalist James J. Audubon in 1831 to collect research specimens. The Shark was the first U.S. ship to navigate the Strait of Magellan in 1833 en route to Peru.

According to the “Arch Cape Chronicles,” by David and Alma English, in the summer of 1846 Lt. Neil N. Howison received orders to carry supplies from Honolulu in readiness to ascend the Columbia River as far as the Willamette. Their reports would assist in formulating a decision on the location of the boundary between England and the American lands. Americans wanted the board to be 54 degrees, 40 minutes latitude, the reason for Polk’s slogan, “54-40 or fight,” immortalized in history books.

But due to a lag in communications, crew members were unaware that the U.S. Senate had already ratified a treaty with Britain making the U.S. border the 49th parallel, rendering the journey unnecessary. Some of the ship deserted, but the lieutenant in command was “impatient, naive and somewhat impetuous” in seeking his return south. He attempted to cross the Columbia Bar without a bar pilot. With a sparse crew and bad weather, on Sept. 10, 1846, the Shark was pulled directly toward breakers. While the crew survived, the ship was destroyed.