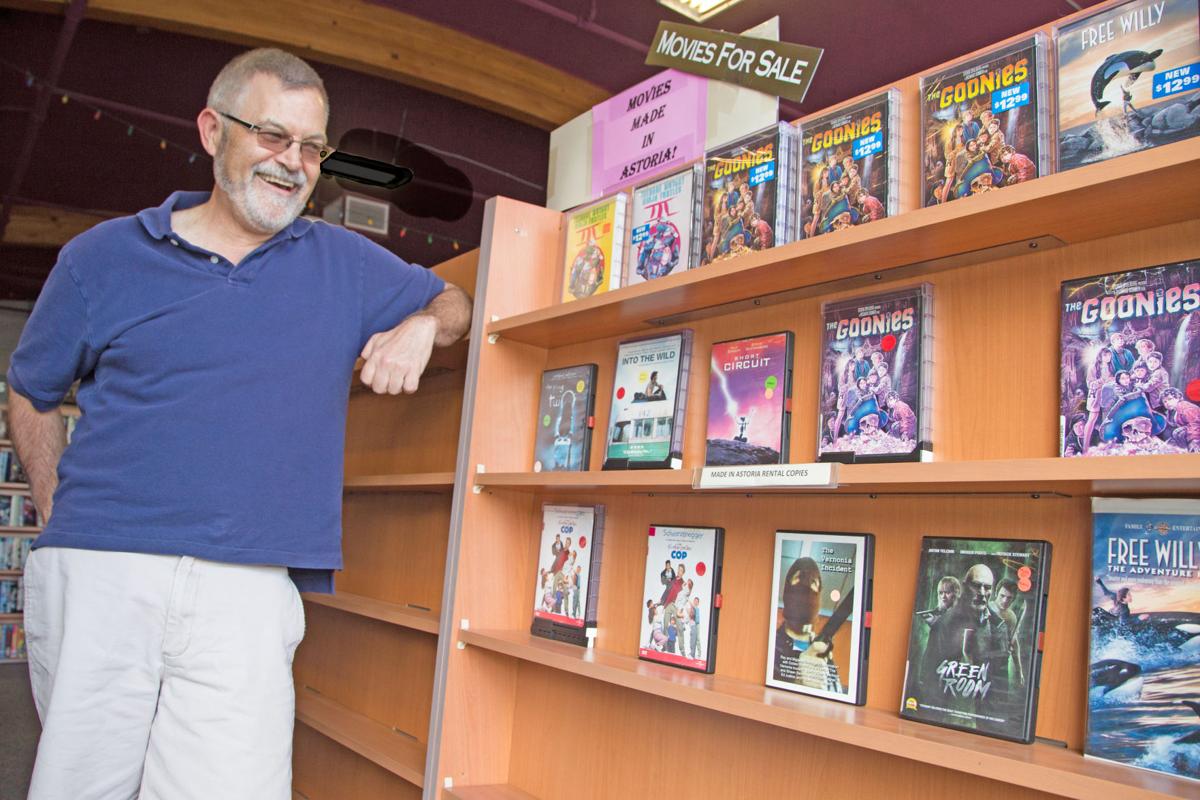 Neal Cummings, owner of Video Horizon, seeks out rare movies not found on Netflix or in Redbox. Cummings has a rack of films shot in Astoria, including the 1985 classic, The Goonies. He sells several copies each week. “I have to have it in stock,” he said. 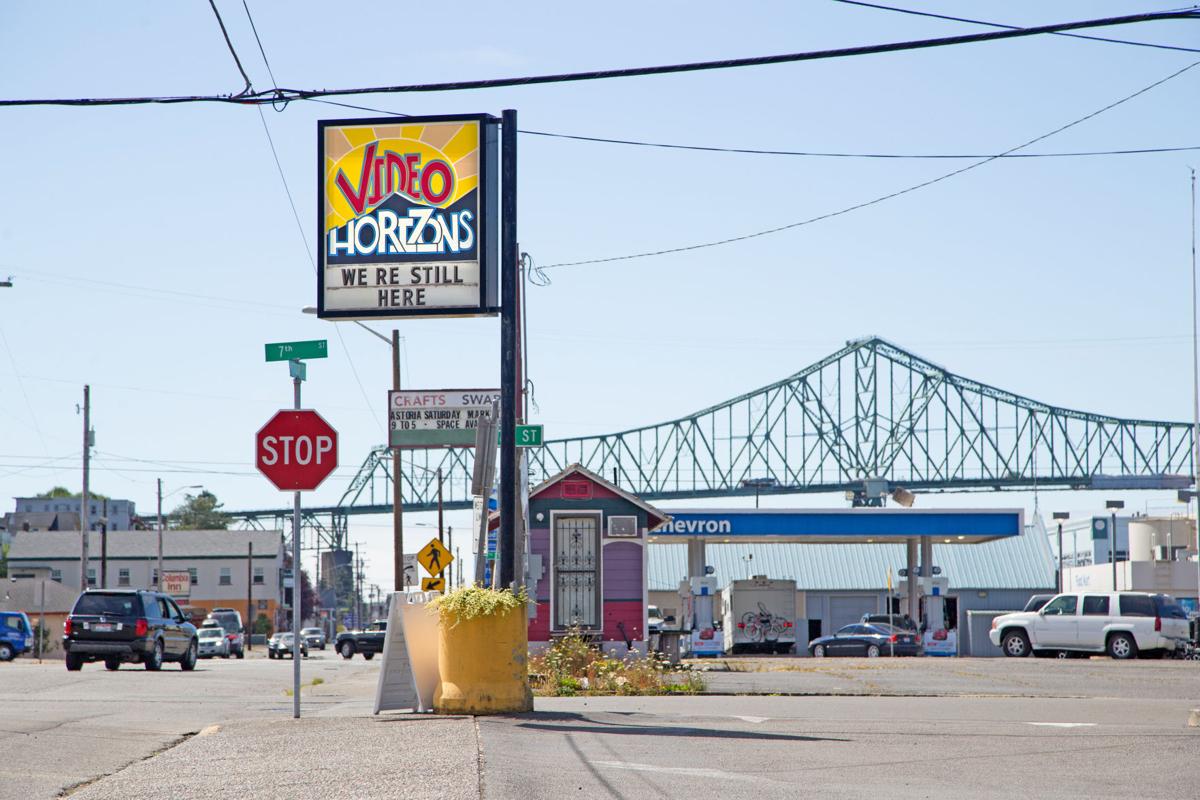 Video Horizons opened in 1984 and has survived the mass extinction of the stand alone video rental store business across America. 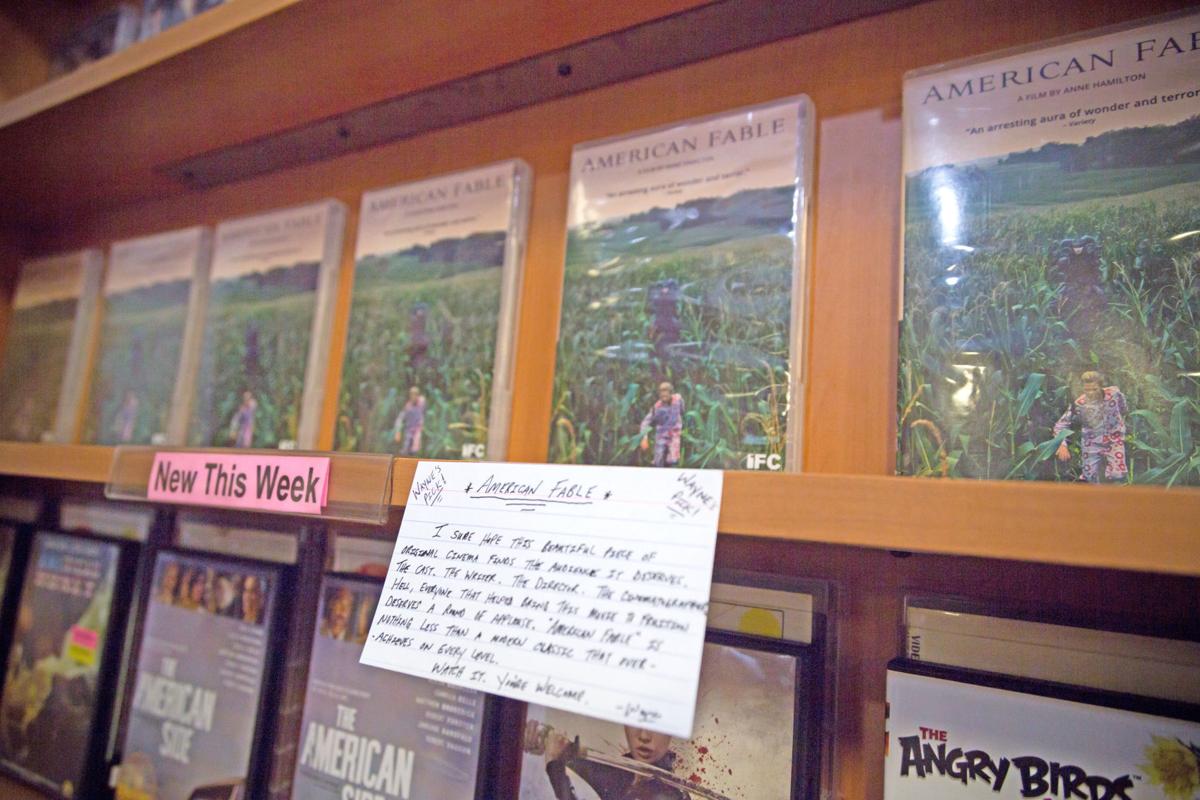 Staff at Video Horizon write reviews for new releases. Many of the movies on the shelves are not available on Netflix or in Redbox.

Neal Cummings, owner of Video Horizon, seeks out rare movies not found on Netflix or in Redbox. Cummings has a rack of films shot in Astoria, including the 1985 classic, The Goonies. He sells several copies each week. “I have to have it in stock,” he said.

Video Horizons opened in 1984 and has survived the mass extinction of the stand alone video rental store business across America.

Staff at Video Horizon write reviews for new releases. Many of the movies on the shelves are not available on Netflix or in Redbox.

ASTORIA — Enter “video rental stores” in Google and the search site will predict the words that follow.

“Still open,” “near me,” “out of business” are the top responses. The decline of home video stores has been well documented, and apparently, thoroughly searched.

In 2004, Blockbuster had more than 9,000 stores nationwide. Today only 10 remain. Seven are in Alaska, where long winters and slow Internet attribute to the survival of a few stores. The Movie Gallery once had 4,700 stores, including one in Warrenton. The last one closed in 2010. The rise of mail-order online and instant streaming sites like Netflix combined with the automated kiosks popularized by Red Box led to the rapid extinction of stand alone stores nationwide.

In Astoria, however, one remains: Video Horizons. Neal Cummings opened the store in 1984, and has expanded his business in the wake of a nationwide collapse of stand-alone rental stores.

1984 was an incredible year for Hollywood cinema. Theaters were packed throughout the year when several iconic feature films made their debut including “Indiana Jones and the Temple of Doom,” “Footloose,” “Gremlins,” “Karate Kid,” “Ghostbusters,” “Terminator,” “Nightmare on Elm Street” and “Sixteen Candles.” The home video rental industry was still in its infancy, but stores were starting to pop up across country, mostly in metropolitan areas. By 1985, more than 15,000 video rental stores had opened for business. Among them was Astoria’s very own rental store, Video Horizon, which, remarkably, still remains open today with Cummings, its original 62-year-old owner.

In 1985, the video cassette recorder (VCR) had triumphed over Sony’s Betamax a few years earlier and was becoming increasingly common in homes across America.

“It was so cool to watch a movie at home on a tape at that time,” Cummings said standing next to a shelf of DVDs at his store at 750 Astor Street. Today, Cummings has more than 50,000 DVDs, many of which are clearly marked “Not available on Netflix or Redbox.” Cummings is well aware the competition has changed from the store across town to online streaming sites and each of the soda-machine sized kiosks.

Cummings love for movies started in college after taking a class called “History of the Cinema.” Majoring in architecture at the time, he didn’t expect a lot of the class.

“I thought it was going to be an easy elective but it turned out to be my passion,” he said. The class exposed Cummings to new films, directors and genres at a time when technology was changing the movie watching experience.

“VHS had just come out,” Cummings said. “It was the beginning of movies at home.” The impression made him reconsider his career.

“Instead of pursuing what I was going to school for, I saw the opportunity to do something that I loved,” he said. In the early 1980s, at a 7-11 store on Mercer Island, he got his start by curating a corner of VHS movies. After a few months, he was ready for more and sought to manage his own video rental store.

“At that point they were just starting to come into existence,” he said. Portland was considered the epicenter of all the action.

“Portland had more video stores per capita than anywhere else in the world at the time,” Cummings said. “I went down for a weekend and within a matter of hours I had a job offer.”

Soon, the Portland store was looking to add another location along the coast, but first needed someone to run it.

Cummings applied and got the job at what was called “Video Unlimited” in Warrenton in early 1984. Within months, he was already considering buying the store, but ultimately decided to open his own. In December 1984, at age 29, Cummings opened Video Horizons in what was a former Mexican restaurant in Astoria.

“It used to be a Taco Terrific. We had to peel the grease off the walls,” he said. In 2002, after 18 years, Cummings relocated to 750 Astor Street, his current location. It was a time when most movie rental companies had started to sense the beginning of the end. Online streaming services were beginning to gain membership. In response many video stores began to curb expansion, close stores and carry fewer titles and less copies. Cummings decided to take the opposite approach by investing more in movies and the layout of the store.

“I tried to look like a Blockbuster without being one. I copied their wooden shelving — I spent a lot of money on shelves. I have lots of space and lots of movies, more than 50,000. It all makes an impression when people come through the door,” he said. It worked. But Cummins also considers his situation unique and relatively fortunate.

“I’ve been lucky. The size of the town is small enough that a bunch of chain stores didn’t come in, but it was big enough to support me. We had one chain, Movie Gallery in Warrenton. They were my competition for quite a few years. Being as they didn’t come into Astoria, I was able to survive, ” he said.

“I think what stores did wrong was they didn’t go big, instead they went small when things started getting tough. They would only stock one or two copies of hit films whereas I was still bringing in 80 to 100 copies. I would have them available that first week in when everybody wants them, and then I could sell them later.” After 30 days new rental movies are shuffled to sales rack where they’re sold at a fraction: $5 each, 4 for $20. It’s been a boon for the business.

“Sales is almost 50 percent of my revenue now — it’s huge. Without it, I couldn’t survive,” he said.