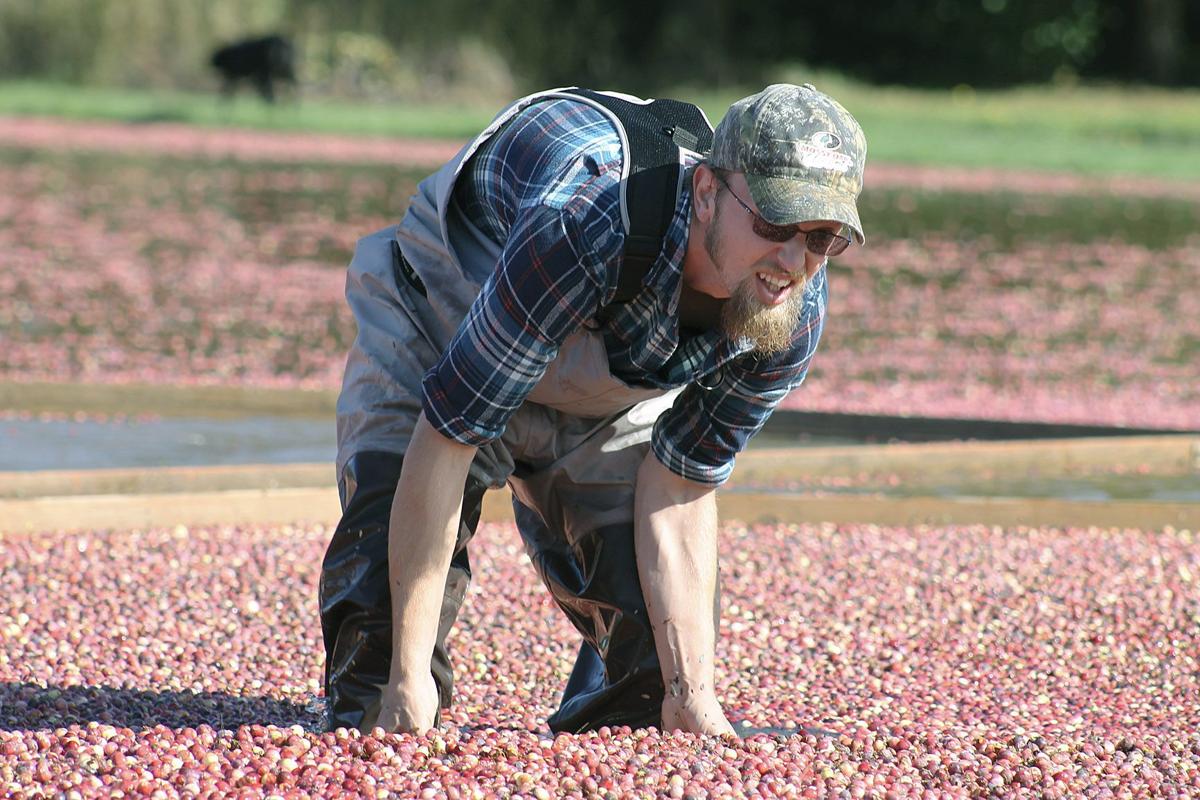 Don Jenkins/Capital Press Mark Hyde of Aberdeen, Wash., uses a 2-by-4 board to push cranberries during a harvest on the Long Beach Peninsula. 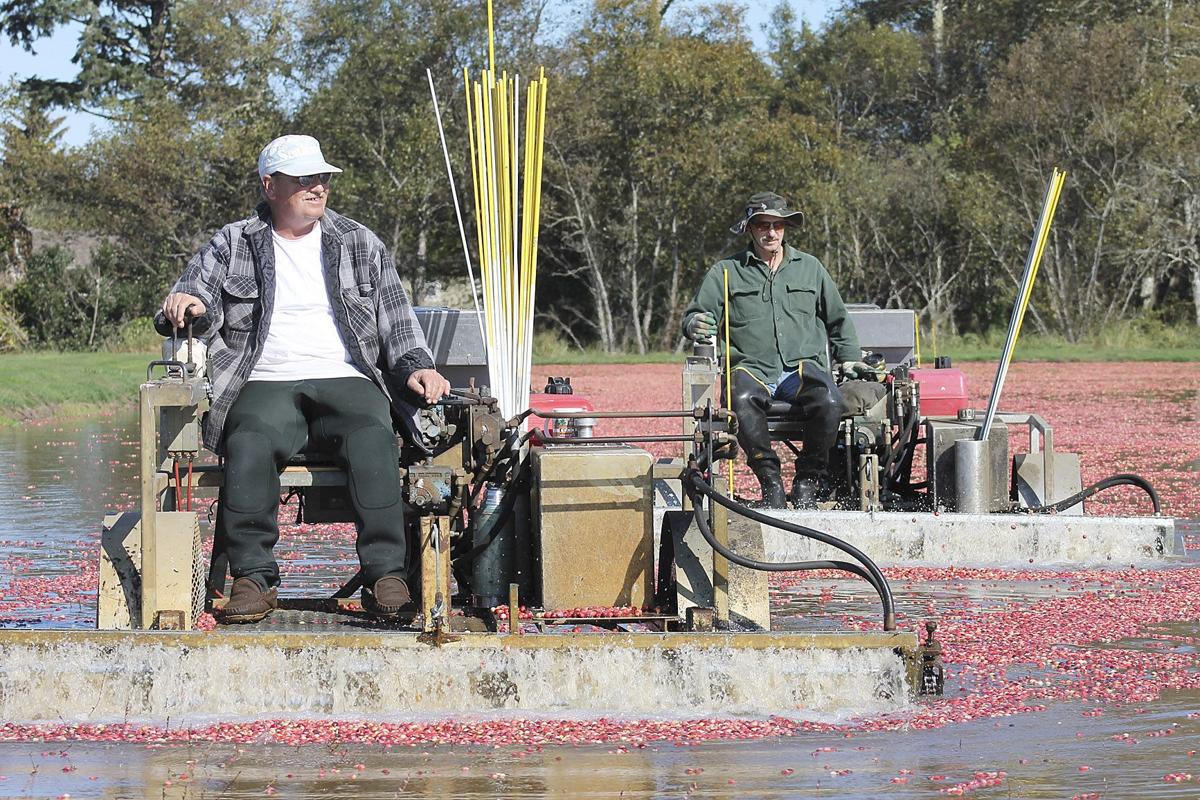 Don Jenkins/Capital Press Workers churn flooded bogs to bring cranberries to the surface during a harvest on the Long Beach Peninsula. 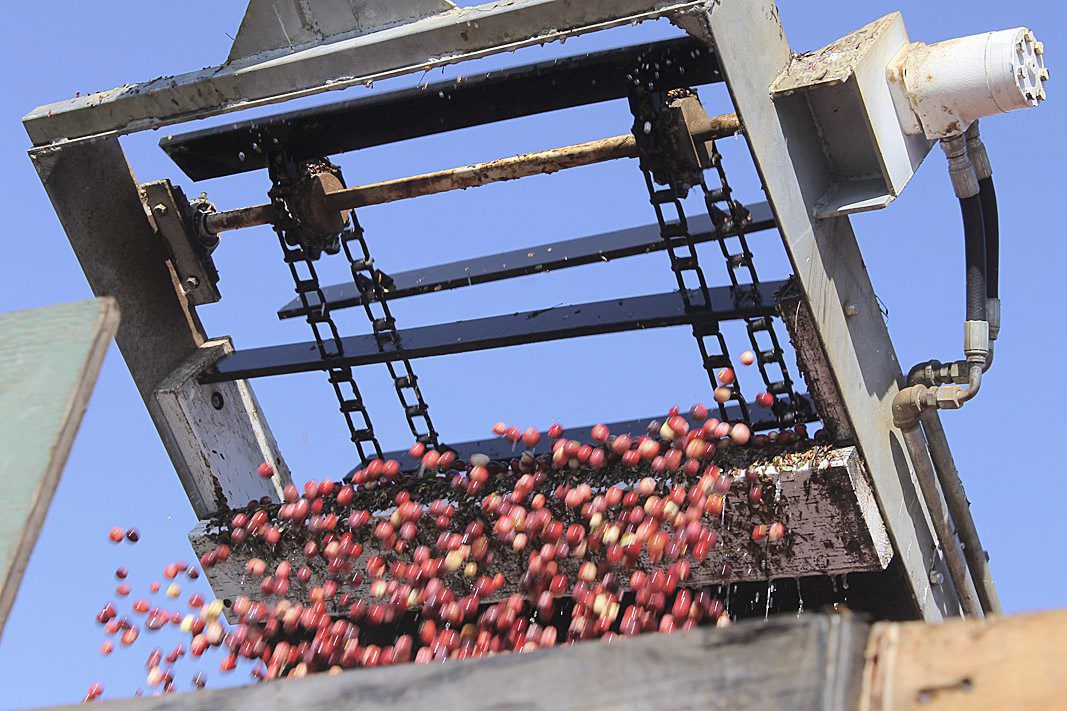 Don Jenkins/Capital Press Cranberries spill from a conveyer during a harvest on the Long Beach Peninsula. 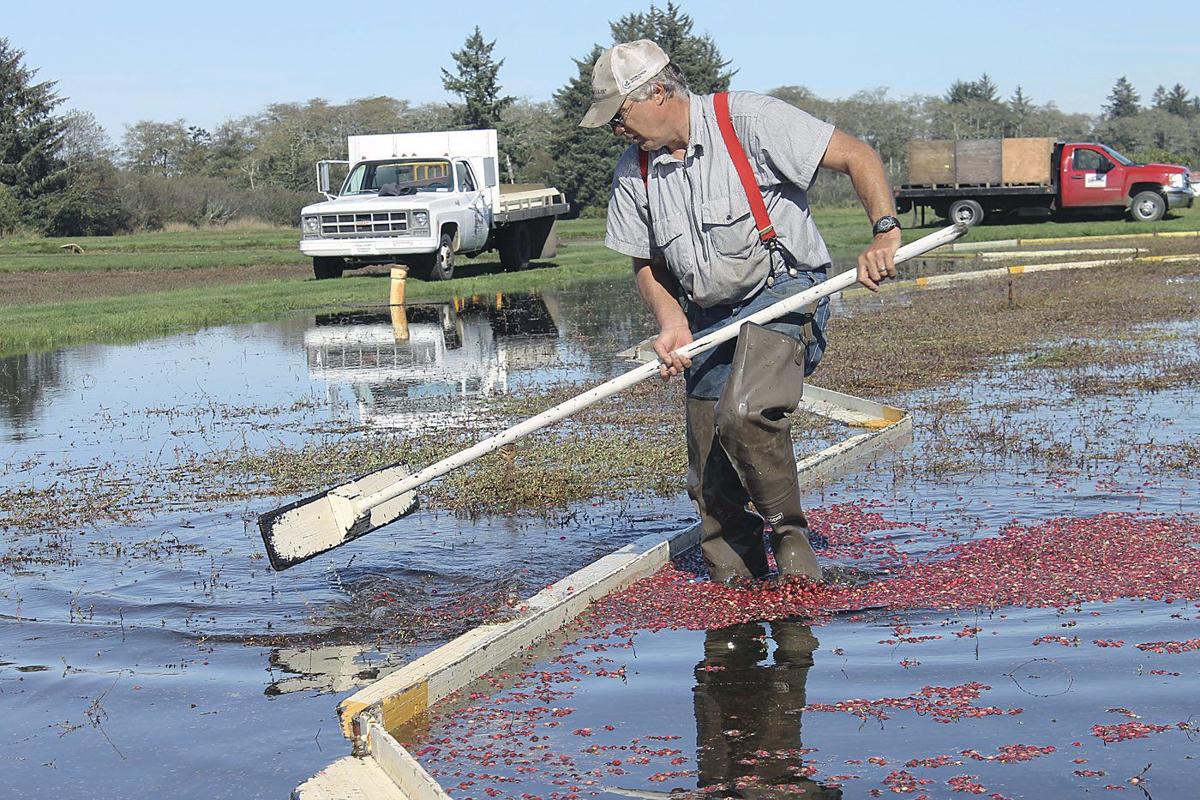 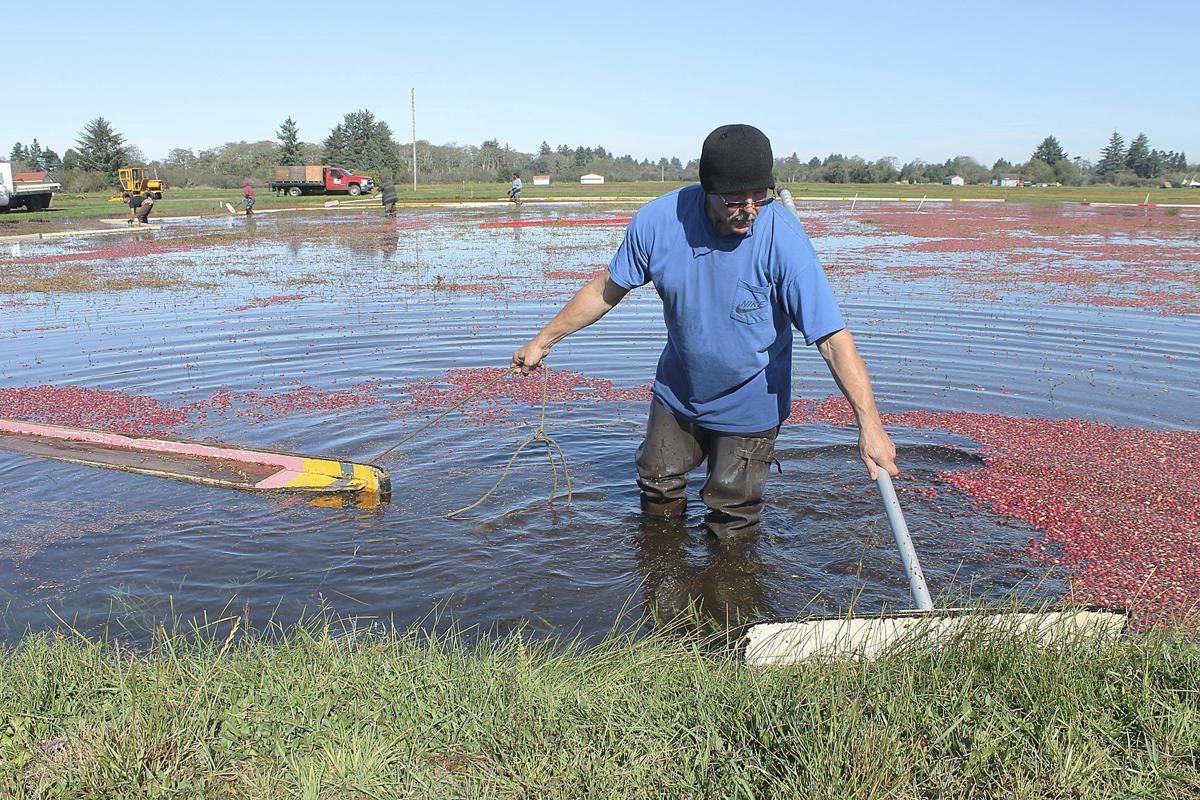 Don Jenkins/Capital Press G.T. Buck rakes together cranberries as workers being harvesting a flooded bog on the Long Beach Peninsula. 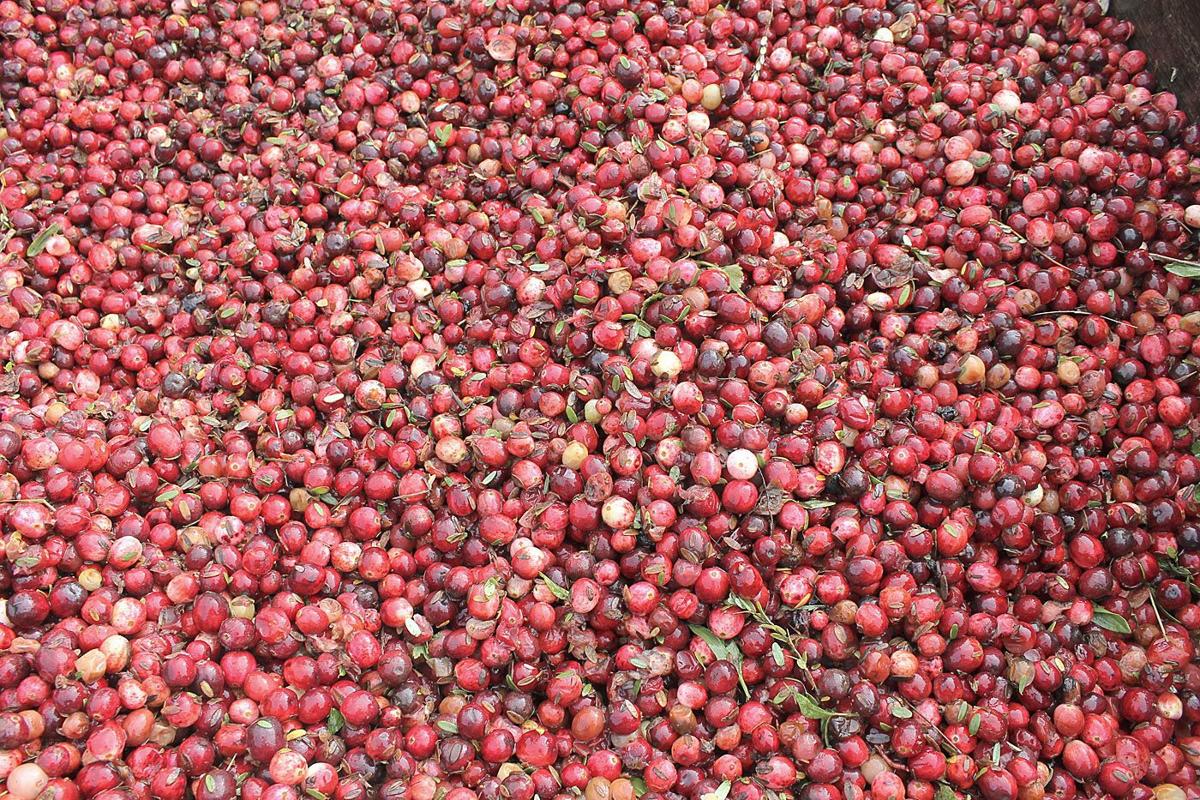 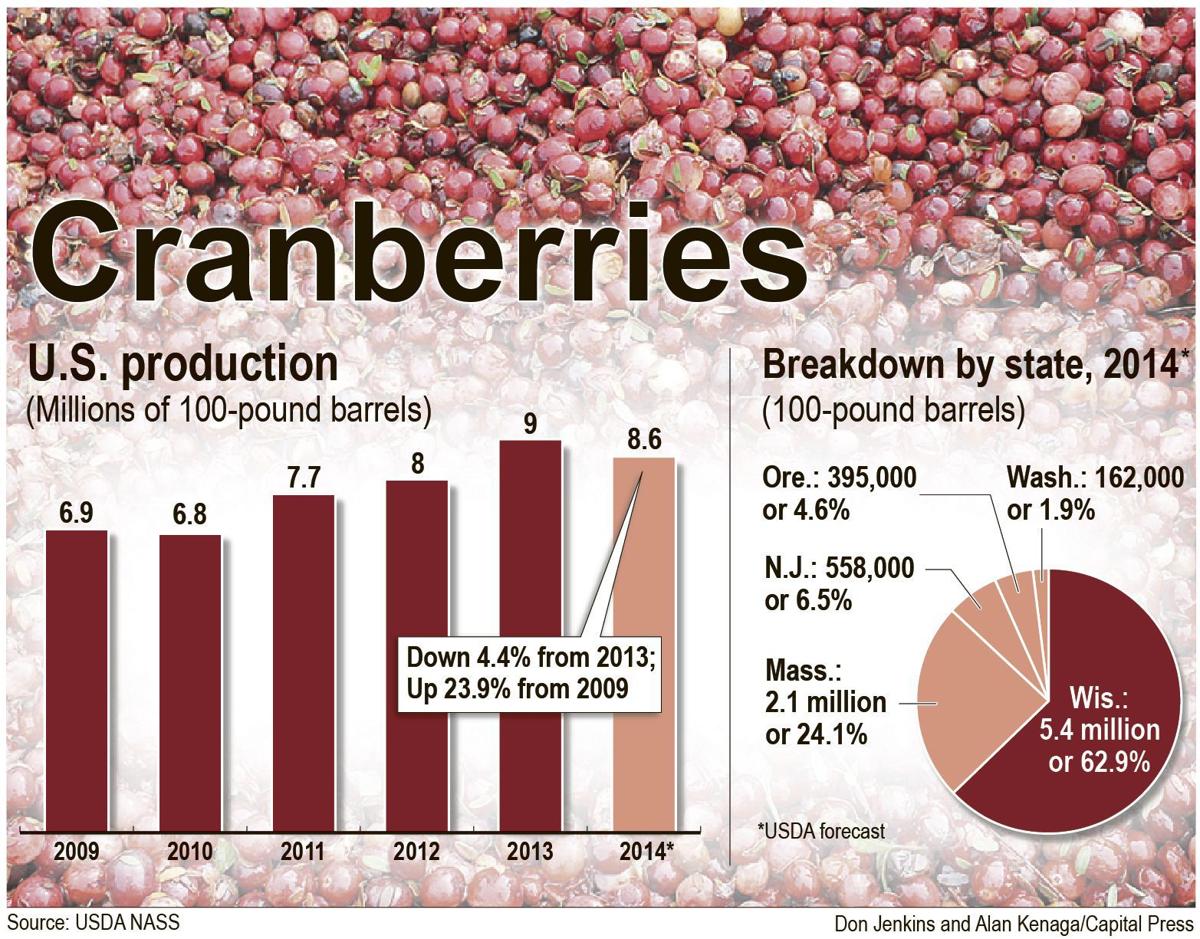 Don Jenkins/Capital Press Mark Hyde of Aberdeen, Wash., uses a 2-by-4 board to push cranberries during a harvest on the Long Beach Peninsula.

Don Jenkins/Capital Press Workers churn flooded bogs to bring cranberries to the surface during a harvest on the Long Beach Peninsula.

Don Jenkins/Capital Press Cranberries spill from a conveyer during a harvest on the Long Beach Peninsula.

Don Jenkins/Capital Press G.T. Buck rakes together cranberries as workers being harvesting a flooded bog on the Long Beach Peninsula.

LONG BEACH, Wash. — Cranberry farmers, growers of the only commercial ground crop in the southwest corner of the state, perpetually battle the cool climate and limited acreage.

Now, they have an even bigger problem — a global glut of cranberries so severe that U.S. farmers asked, in vain, for the U.S. Department of Agriculture to impose volume controls.

“We don’t have too much to brag about,” said Malcolm McPhail, a leading cranberry farmer on the Long Beach Peninsula.

The weather is the first strike against them. If only a variety of cranberry thrived in the mist. “We’re looking for one that grows well in the fog and rain,” Long Beach Peninsula cranberry grower Steve Gray cracked.

Washington boasts 4 percent of the U.S. cranberry acreage, but produces less than 2 percent of the berries. Yields are higher in the other cranberry producing states — Wisconsin, Massachusetts, New Jersey and Oregon, where cranberries grow on the sunnier southern coast.

The terrain also limits the industry. The land lies low between the ocean and inland bodies of water. Permits to plant in wetlands are expensive and difficult to get. “It’s just so restrictive,” said Washington State University research scientist Kim Patten, stationed in Long Beach.

With limited space, Washington cranberry growers don’t have the economies of scale enjoyed by larger operations, particularly in Wisconsin — far and away the No. 1 cranberry state.

But the worst problem is the oversupply plaguing cranberry growers everywhere.

Most Washington cranberry farmers belong to the Massachusetts-based Ocean Spray cooperative. It’s their one big advantage because the co-op guarantees an income. Independent growers face selling their fruit at a loss.

“Something has to happen,” said Curry County, Ore., cranberry grower Bob Donaldson, who sells to both Ocean Spray and independent buyers. “What we need is that new market ... that new product.”

Cranberry bogs are being harvested now.

Donaldson said a warm spring and nice summer has led to high-quality fruit in Oregon.

In Washington, “most growers seem to be reasonably happy,” Patten said.

Yields, however, can vary sharply from bog to bog, depending on the variety and micro-climate. Farmers say if a field goes gangbusters one year, it likely will go bust the next.

Wisconsin produces about two-thirds of the U.S. cranberry crop. Farmers there harvested a record-shattering 6 million barrels last year, pushing the U.S. crop to almost 9 million barrels, an 11 percent increase over the year before. Each barrel represents 100 pounds.

With berries flooding the market, the average price nationwide dropped from 48 cents a pound in 2012 to 32 cents, according to the U.S. Department of Agriculture.

Patten estimated that farmers need to receive at least 30 cents a pound to break even, assuming decent yields and limited debt.

With the average price last year hovering around that mark, some growers sold at below the cost of production.

“How long can they hang on goes back to debt structure and whether they’re doing it for a living or hobby,” he said.

Before last year, the average price nationwide had topped 45 cents a pound for several years and reached 58 cents a pound in 2008.

With so many cranberries in storage, the committee took the rare step last winter of asking the USDA to impose volume controls. The agency turned down the proposal, saying it wasn’t in the public’s interest.

Soares says the committee could renew its request next year.

“No one likes to see it,” he said. “It’s a tool we have, fortunately, that’s there if it’s necessary.”

“We’ve seen growers get out of the business,” he said.

Without the option of simply not planting, growers have tended their perennial plants and cultivated a normal crop, Lochner said.

The association predicts a harvest of 5.2 million to 5.4 million barrels, down from last year but still a large crop.

The surplus has discouraged expansion or renovation of bogs, Lochner said.

“I don’t see growers looking to do anything but try to minimize their costs,” he said.

With Wisconsin expected to move back to a more normal harvest, Ocean Spray last month estimated the global crop will be 11.2 million to 11.6 million barrels, down from 12 million barrels in 2013. Ocean Spray predicted harvests will be on par with last year in the other North American cranberry growing regions, including the Canadian provinces of British Columbia and Quebec. Quebec, in particular, has emerged as a major source of cranberries in recent years.

The cranberry industry faced an oversupply a little more than a decade ago. Increased sales to Europe and of dried cranberries helped.

This time, salvation may be China and powder.

The cranberry committee hopes consumers will embrace cranberry powder as a healthful addition to drinks and smoothies, even as they turn away from sugar-added fruit juices.

In 2013, the committee launched a campaign to cultivate “cranbassadors” in China. Soares has gone to China three times to expose “key opinion leaders,” like dietitians and bloggers, to this unknown berry.

“We try to influence the influencers,” he said.

In China, Soares has touted the berry’s versatility, health benefits and safety. New federal food-handling rules may cause American growers headaches, but they play well in China, he said. “It’s really a marketing advantage for U.S. agricultural products.”

If cranberries take off in China, Soares said he doubts the Chinese will develop a domestic supply. Ground suitable for cranberries is already taken up by a more important crop, rice.

Washington growers have some things in their favor. Most Long Beach-area farmers belong to the Ocean Spray cooperative, a guaranteed paying customer. In Grayland to the north, farmers sell a majority of their crop for fresh fruit, fetching a much higher price per pound.

In 2013, the average yield per acre in Washington was 89 barrels. It was 283 barrels in Wisconsin. Anecdotally, Washington farmers report yields of more than 300 barrels per acre with new types.

“We keep taking out those old varieties and putting those others in,” said McPhail, who has 122 acres in his family. “We’ve had some really good yields.”

Farmers considering whether to invest the money and years in cultivating fields face a conundrum, however.

“If prices are low, you don’t want to do that. If prices are high, nobody wants to take land out of production,” Patten said.

Right now, prices are low for farmers. “We’re asking they hang in there,” the cranberry committee’s Soares said.

Donaldson, in Oregon, said he wished he knew how long prices paid by independent buyers will remain “way below break-even.”

“I wouldn’t recommend anyone get into the industry,” he said.

Patten said he sees an opportunity for Washington cranberry growers to fill a niche by supplying fresh cranberries for Christmas.

Farmers will have to cultivate berries that hold up between the harvest and the holiday. Patten said it’s a long-term project that may take a decade. “If all the stars line up, we can get there.”