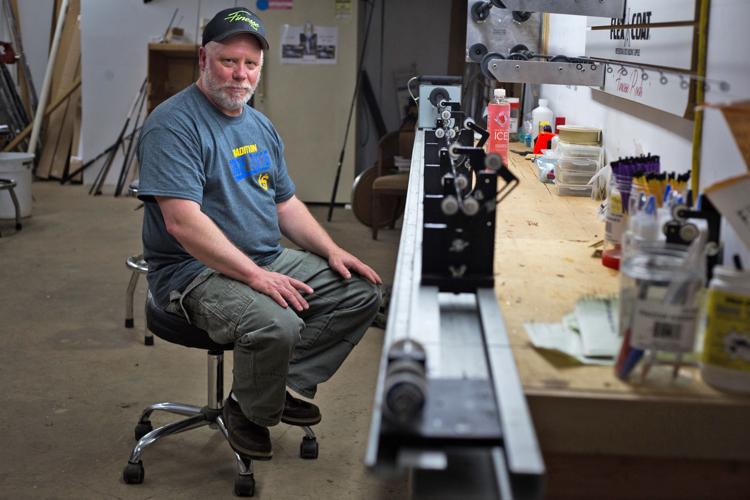 Tim Johnson has made more than 300 custom fishing rods in the basement of his Astoria home over the past three years. 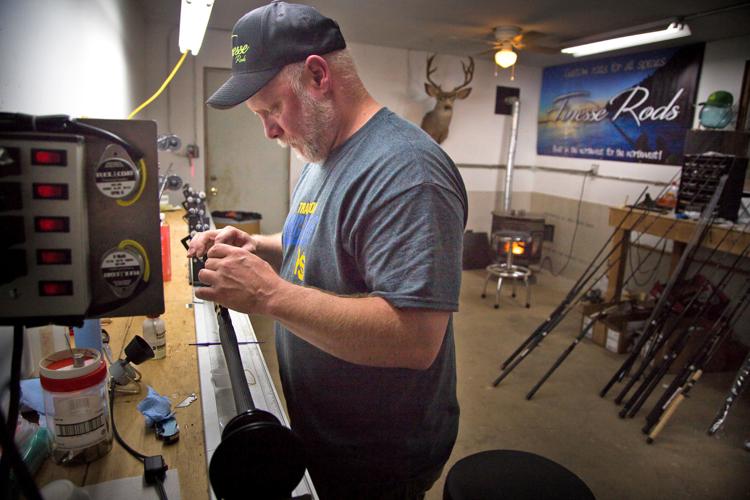 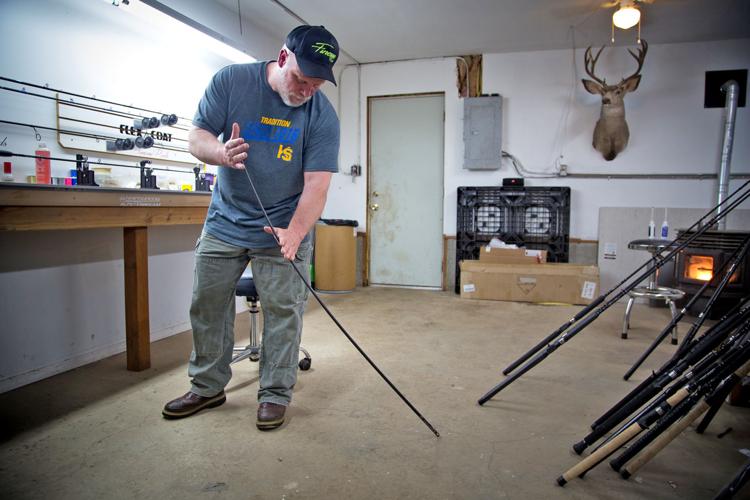 Johnson first runs flexibility tests with each rod blank to determine where the eyelets or guides will go. 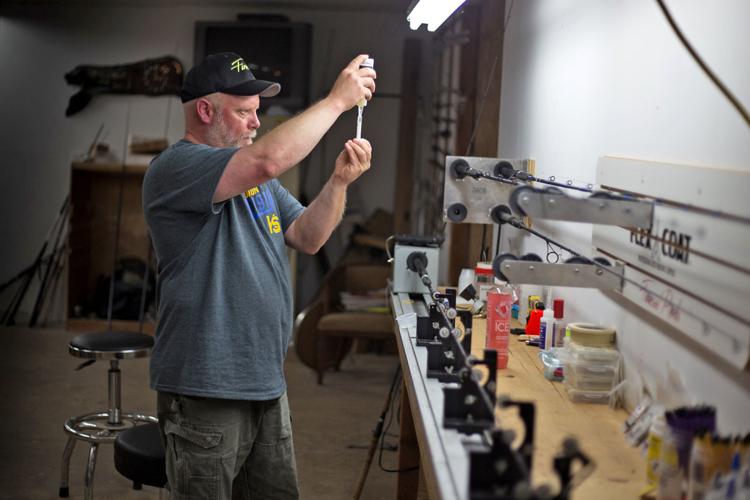 Johnson prepares to apply finish, one of the final steps of the rod building process. 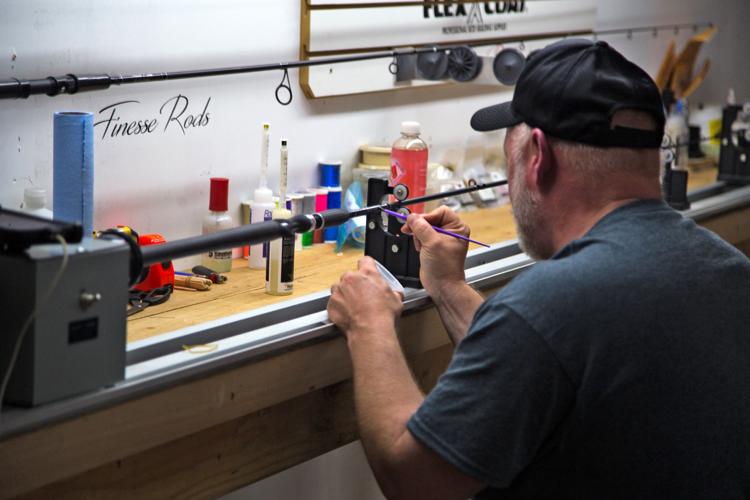 Applying the finish is the most tedious part. “People are paying for perfection,” Johnson said. “It has to be right.”

Tim Johnson has made more than 300 custom fishing rods in the basement of his Astoria home over the past three years.

Johnson first runs flexibility tests with each rod blank to determine where the eyelets or guides will go.

Johnson prepares to apply finish, one of the final steps of the rod building process.

Applying the finish is the most tedious part. “People are paying for perfection,” Johnson said. “It has to be right.”

ASTORIA — It’s little wonder how a region renowned for remarkable salmon runs and sturgeon as big as Volkswagen Beetles could have inspired generations of entrepreneurial fishermen, some who have pioneered new technology and revolutionized the fishing rod industry worldwide.

By day, Tim Johnson is a water-quality technician for the city of Astoria, a job he’s considered a duty for decades with a main mission of keeping the city water clean. But most evenings he retires to his basement, where his custom manufacturing business begins. Over the past three years, Johnson has crafted hundreds of rods for fishermen all over the world in the basement of his Astoria home under the name Finesse Rods.

The business arose after his brother Billy launched a fishing charter service — BJ’S Guide Service — roughly 15 years ago. The boat came stocked with a stack of rods from Ordella, a former fishing rod manufacturer in Battle Ground. When the first salmon season ended, the brothers sought more of the rods, which led to Ordella founder Tom Eccleston, a renowned figure in custom rod building community. Eccleston established the former Eccleston Rods and D&E Rods, a partnership with Vern Dollar.

“I knew he messed with fishing rods, but I didn’t know how deeply he was involved,” Johnson said. “When Gary Loomis started out with IM-6 blank, one of the first graphite rods, Tom was right there with him and represented Loomis at trade shows for years.”

After starting several successful businesses of his own, Eccleston, now in his 70s, was at a turning point in his rod-building career when he met Johnson.

“He was either going to go really big or retire,” Johnson said. Eventually they agreed that Johnson would build rods with Eccleston’s guidance. He then invested in a rod wrapper, rotating dryer and a stock of blanks and components, totaling more than $10,000.

“The deal was he had to help me and it just started from there,” Johnson said.

Like many other American businesses, domestic rod manufacturers have increasingly relied on less expensive foreign labor. In 1997, Woodland-based G. Loomis became a subsidiary of Shimano, a Japan-based manufacturer. In 2009, Wisconsin-based manufacturer St. Croix opened their latest facility in Fresnillo, Mexico. The reasons are usually cost related.

“Everything made in the United States was getting more expensive, from the components to the blanks, so companies started to import,” Johnson said. The difference between custom-made and cheaper, mass-produced fishing rods is often evident in the quality of components and craftsmanship, according to Johnson. Some manufacturers, for instance, will skirt costs by using single-foot guides in place of more durable double-foot guides, which require more thread and labor.

Custom rods come with a cost. Prices range from $200 for steelhead rods to $500 for tuna sticks, more than double the price of most mass manufactured rods, but customers are increasingly willing to dip further into their pockets for a high-quality, American-made products.

Fishermen are also constantly seeking stronger, lighter and more sensitive fishing rods. In the 1940s, Woodland-based Lamiglas embraced fiberglass blanks and revolutionized the rod industry as a replacement for bamboo. In the 1970s, then Kent-based manufacturer Fenwick introduced the first all-graphite blank, making rods more sensitive and lighter. Today, new concepts are still being introduced by pioneering rod builders in the Pacific Northwest, particularly with the handle, guides and reel seat components.

“Cork has been on fishing rods for 100 years,” Johnson said about handles. “The problem with cork these days is the quality. It isn’t as good as it used to be. Most of the quality cork goes to wine bottles.” Cork, while aesthetically pleasing, isn’t always practical either, particularly in the Pacific Northwest.

“Things have changed in the progression of fishing,” Johnson said. “A lot of people are using a lot of dyes and scents and cork will wear that, basically.”

“They’re lighter than cork and they’re heavier duty,” he said. “It’s all about weight when you’re fishing, because you may make 500 casts a day.”