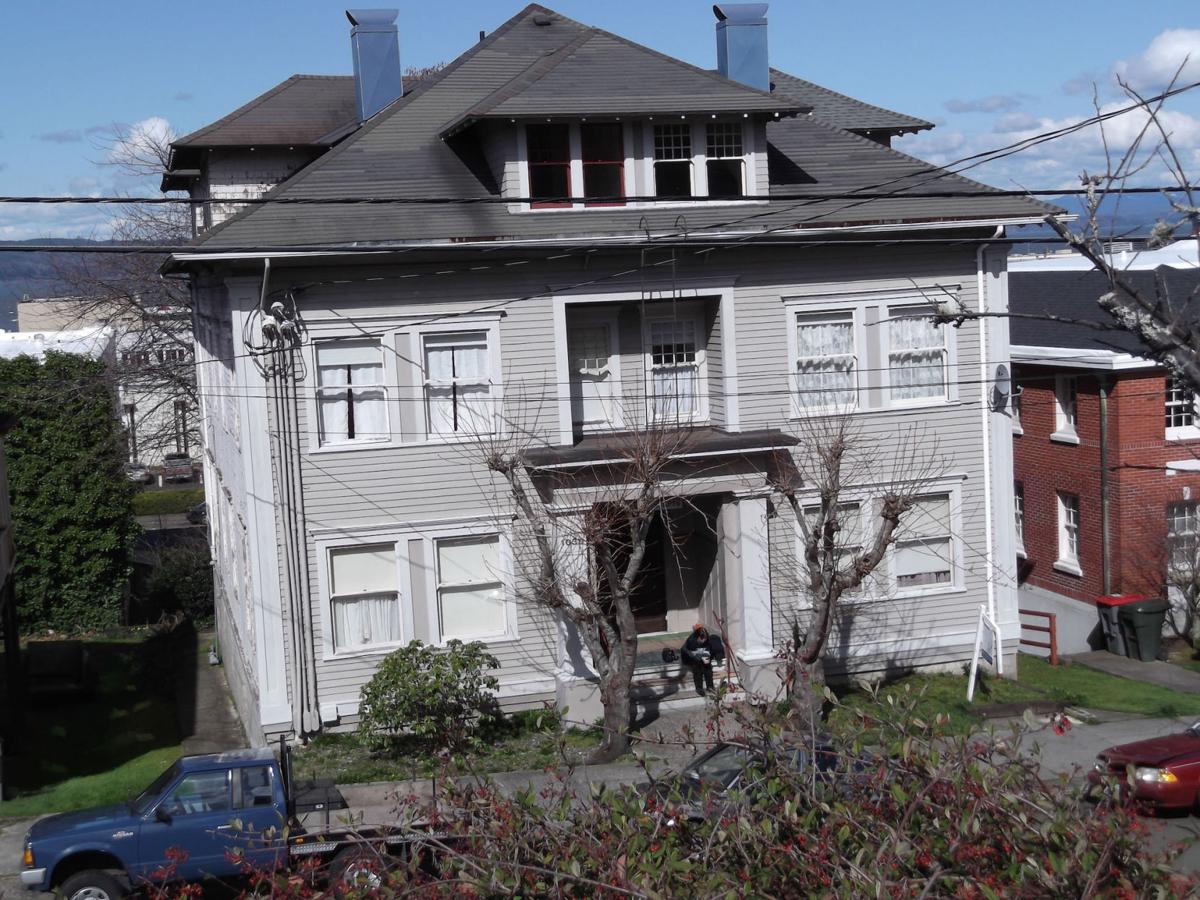 The Francis Apartments were constructed in 1910 for Astoria's business professionals. 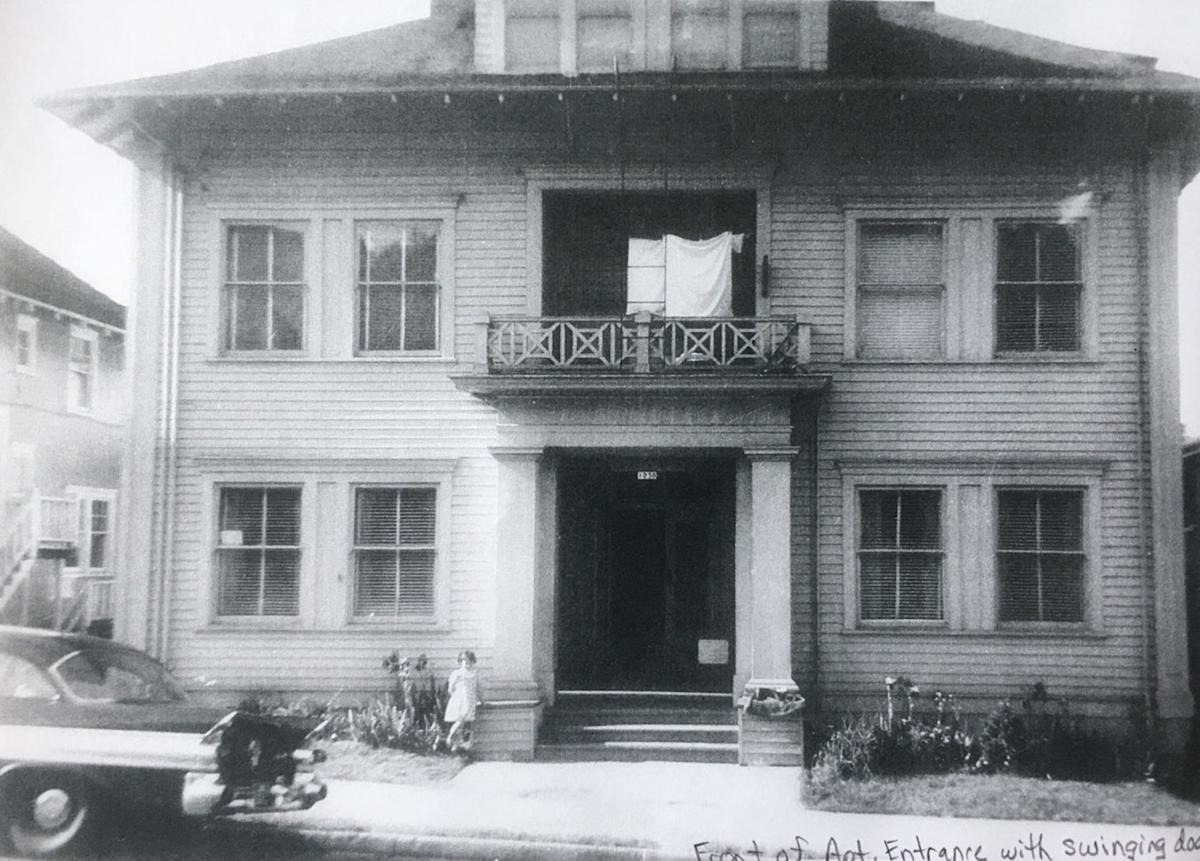 The Francis Apartments as pictured as they were in the 1950s or 1960s. 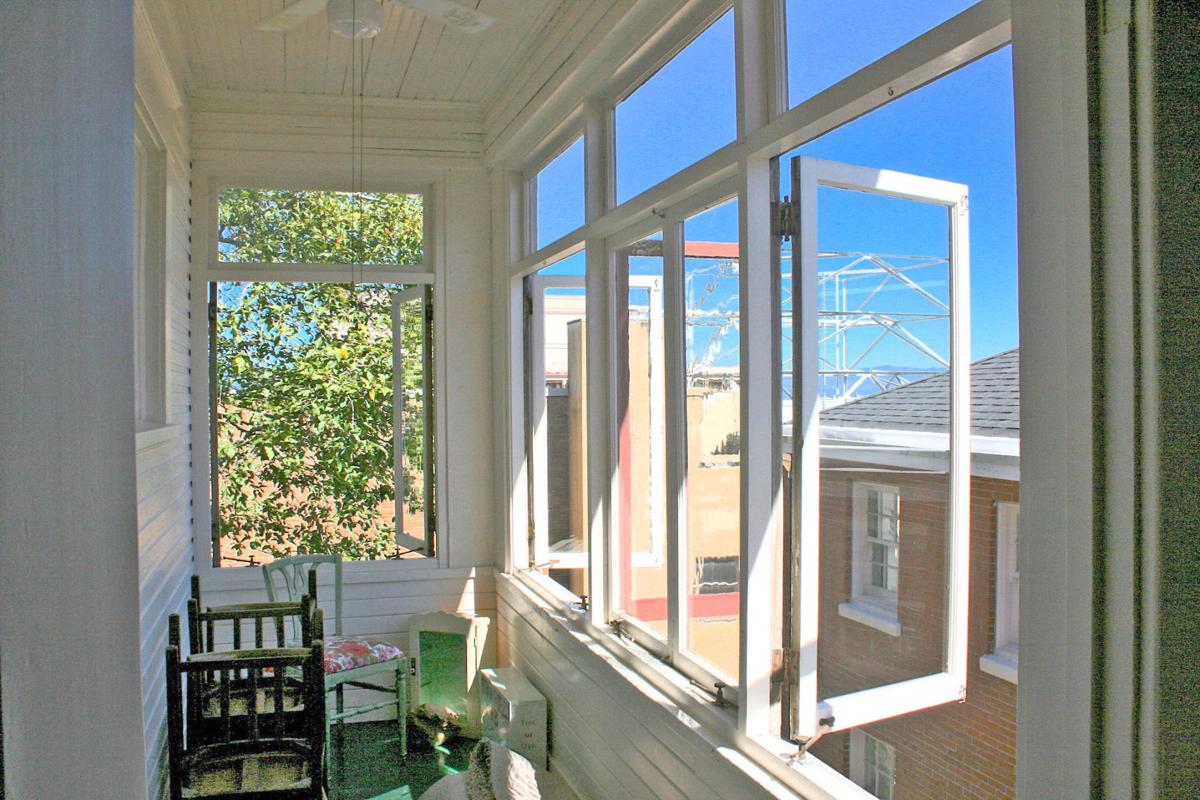 Four of the apartments have sun porches to the rear of the building. 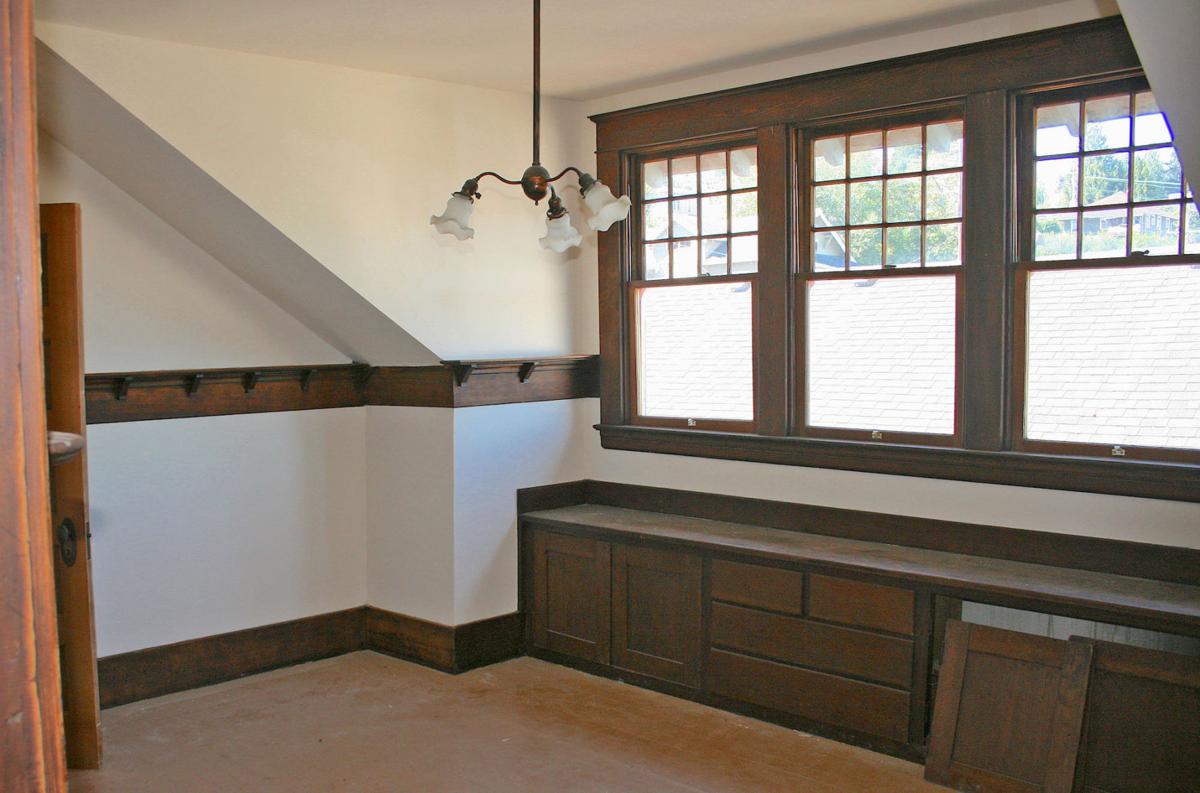 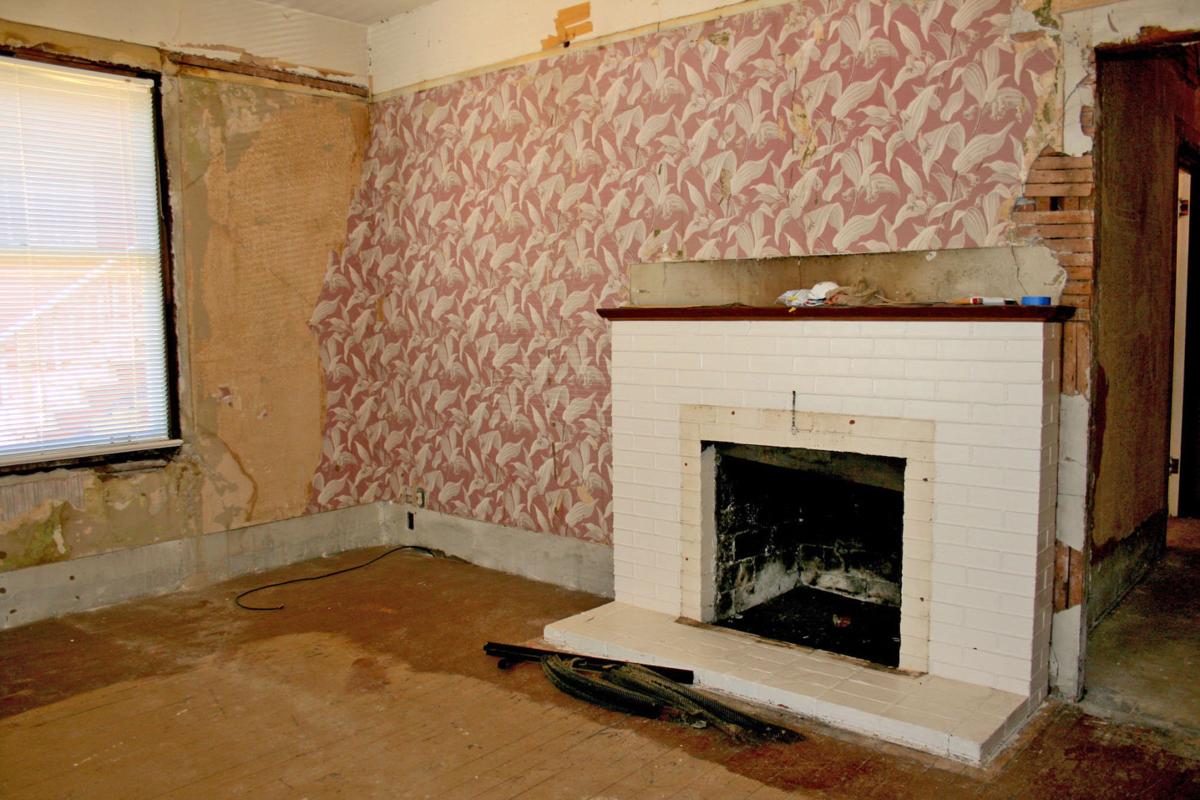 Wood paneling and false ceilings were stripped away to reveal 9-foot ceilings, old wall paper, and shadow lines of woodwork.

The Francis Apartments were constructed in 1910 for Astoria's business professionals.

The Francis Apartments as pictured as they were in the 1950s or 1960s.

Four of the apartments have sun porches to the rear of the building.

Wood paneling and false ceilings were stripped away to reveal 9-foot ceilings, old wall paper, and shadow lines of woodwork.

ASTORIA — Jack and Bonnie Ross are no strangers to restoration of Astoria structures. Several years ago, they restored a fisherman’s vernacular bungalow in Uppertown. A year ago, they purchased — and began reviving the interior of — the Martin and Lilli Foard residence, a high-style Victorian in central Astoria.

More recently, opportunity struck while they were walking their dog. “I said ‘if there is ever a cool old apartment building available ’… then we saw the sign that the Francis Apartments were for sale,” recalled Bonnie. They called Realtor Chris LaPointe immediately, toured the building’s vacant units and wrote an offer within hours.

Constructed in 1910 by Axel Johansen, the apartment building was named after Francis Franetovich, whose father, Lucas, lived there for 30 years. Although there are now eight apartments, there were originally six flats, two per floor. They were, by no stretch of the imagination, low-end housing units; instead, they were constructed for white collar professionals. Early tenants include attorneys, a salesman, a contractor and Olin T. Whitman whom the Astoria Polk Directory humorously listed as a “bum.”

All apartments were bedroom alongside a living room (with fireplace), dining room and kitchen. Apartments on the first two floors had individual sun porches to the rear. Second floor apartments had an additional sun room on the front.

The Lower Columbia Preservation Society (LCPS), a nonprofit supporting advocacy and education in historic preservation, sold the apartments to the Rosses. Its board reviewed 8 separate offers to purchase the Francis.

Sale price was one of several criteria used to select the Rosses. The board also required the Rosses to demonstrate they understood the building’s historical characteristics, were approaching the project with their eyes wide open and had the experience and expertise to restore it.

Anyone who has purchased an old, remodeled building can attest to the joy of removing drop ceilings, florescent lights, worn carpets and dark, wood paneling. Not only is there an instant gratification, but it creates the opportunity to see original volumes, wood floors, shadow lines of wood work and early wallpaper.

The Rosses found initial demolition work at the Francis to be satisfying and revealing. Now, they plan to retain the original 9-foot ceilings, replace thin, modern trim with “beefier Craftsman trim,” and retain large swaths of early wallpaper wherever possible. Original fir floors will be refinished. Early linoleum carpets — if in good condition — may be retained. Hollow core doors will be replaced with period appropriate five-panel wood doors.

Vacant units and common units will be the first to be restored. Bob Lockett will be the general contractor. J & J Harwood will refinish the floors “piece by piece.” Exterior work will include a new roof this fall by Weatherguard Inc. of Longview. And, Scott Still will paint the exterior during the summer of 2019.

Their approach to restoring the kitchen is illustrative of their approach to the entire apartment building. They plan to create an “unfitted” kitchen. In other words, it will not have large, sweeping counter tops and store bought cabinetry.

Instead, the cabinets will be small if not free-standing. There will be furniture, such as a Hoosier cabinet. The sinks will be separate from counter tops. Further, there will be plate racks, schoolhouse lighting and fir floors. A dishwasher will be provided for modern convenience.

LCPS placed a Conservation Easement on the property. A Conservation Easement is a legal contract between the owner and Restore Oregon, a state-wide preservation advocacy group. The agreement ensures that building owners agree, in perpetuity, to maintain the exterior of the structure in such a way as to preserve its historic character.

Potential tax benefits are one reason to pursue the easement. Protecting an investment of time, money and materials through restoration are another. In other words, no one can later purchase it and destroy the character defining elements so carefully restored by previous owners.

Like all those who sought to purchase the Francis Apartments, it was a non-issue to the Rosses. “We are very happy to accommodate,” said Bonnie. “It’s a similar philosophy to what we are used to doing. We think it’s a good thing.”