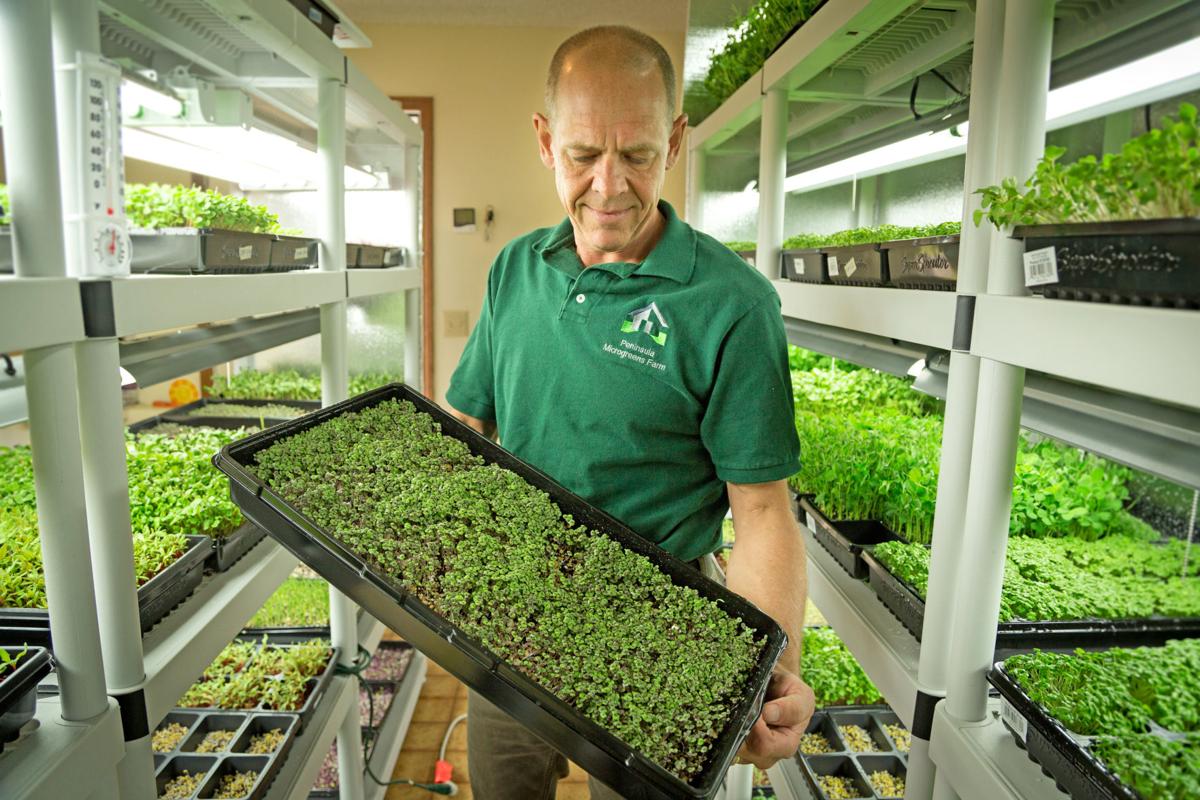 Richard Baumann, 54, grows nearly a dozen different varieties of microgreens in the basement of the Long Beach home. “I'm starting off small but I plan to grow it big,” he said. 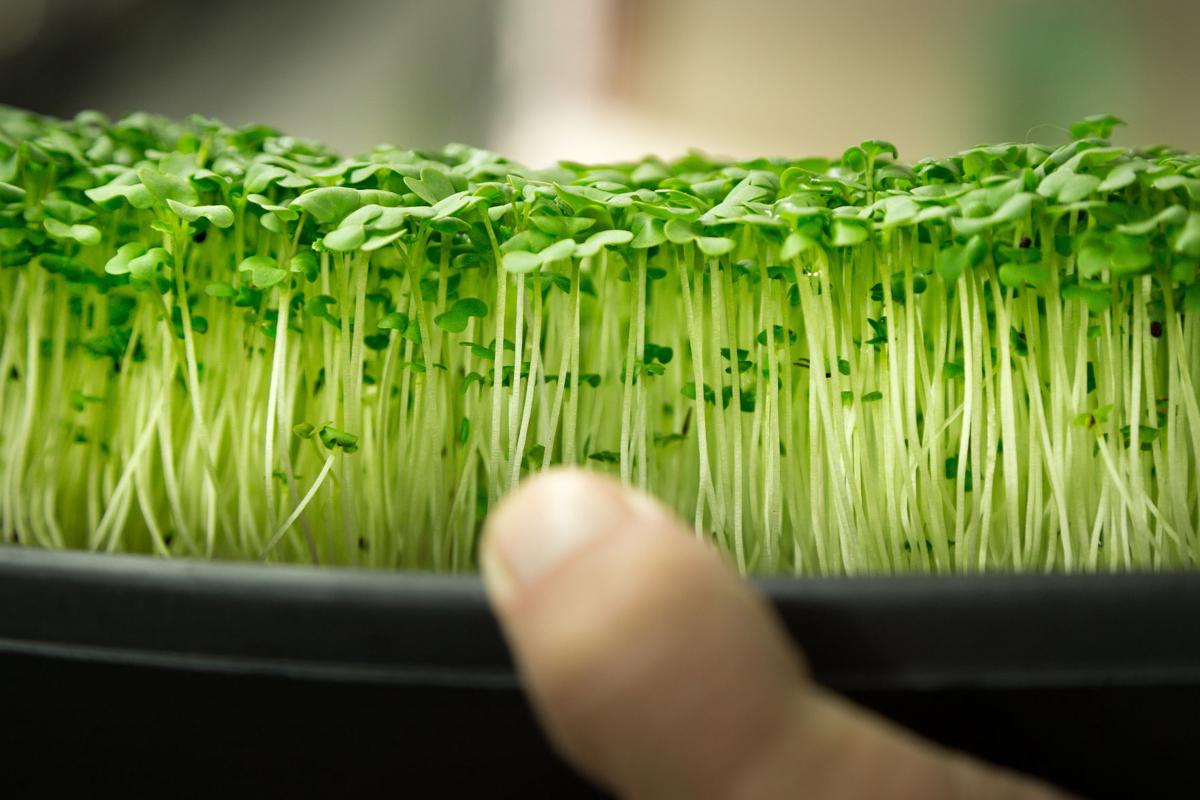 Initially introduced as flavor component for fine dining restaurants, microgreens have been around since the 1980s. Baumann is hopeful to bring more awareness to the health benefits of microgreens and supply coastal restaurants and markets. 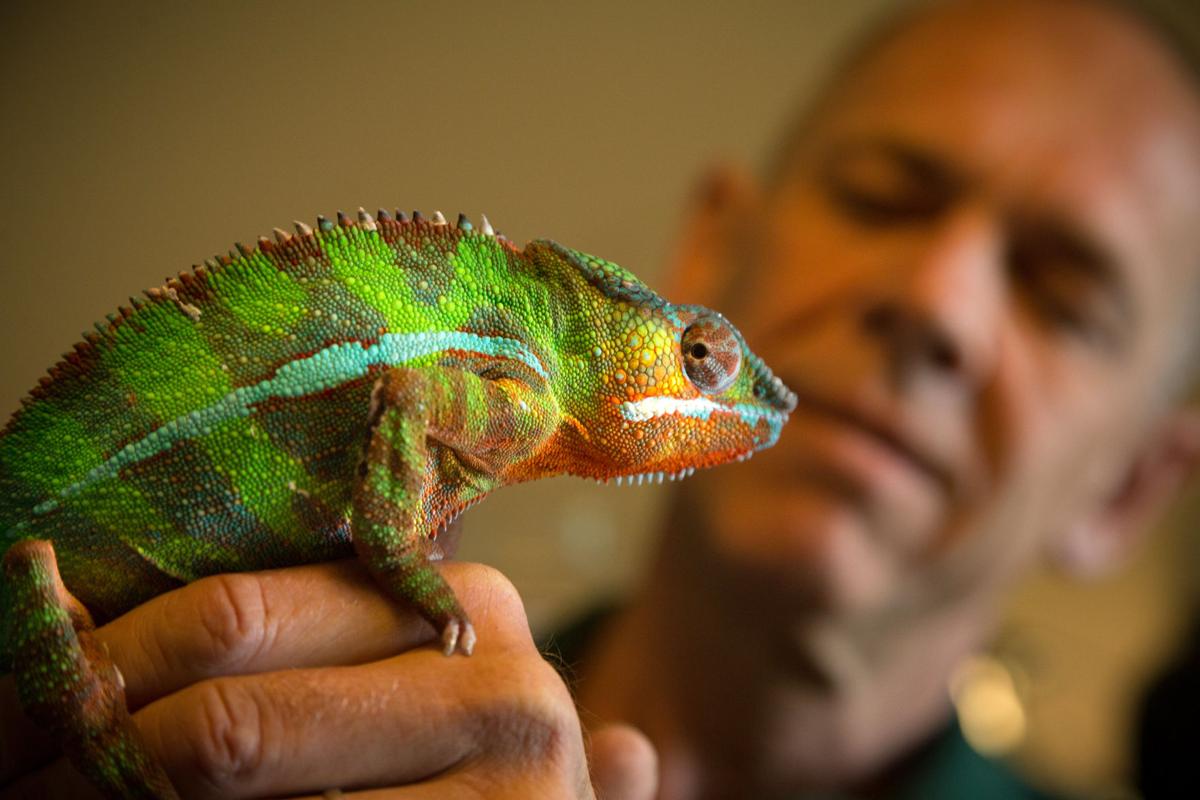 A business major in college, Baumann always had a passion for biology and working with living things. After years of working a stressful job as a resort manager, he quit to pursue his passion and run his own business. 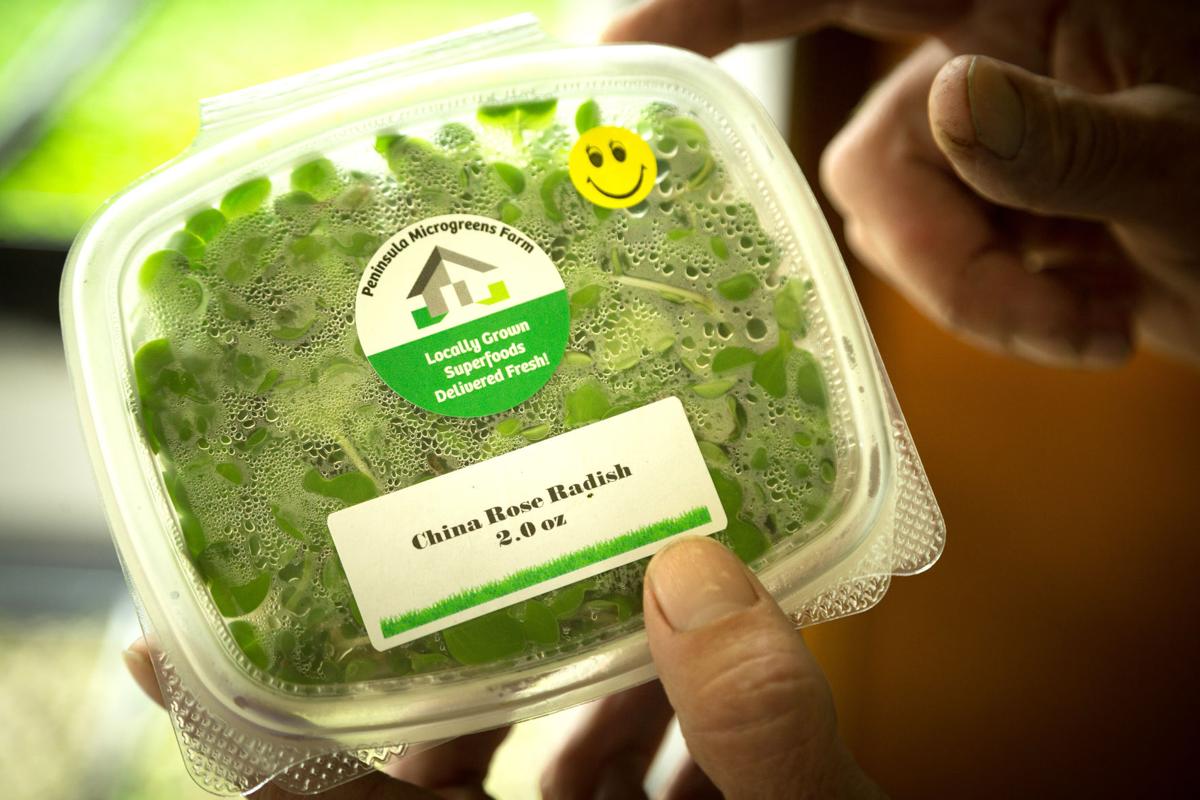 Baumann has been delivering the majority of his microgreens but is hopeful to expand to local stores and markets. 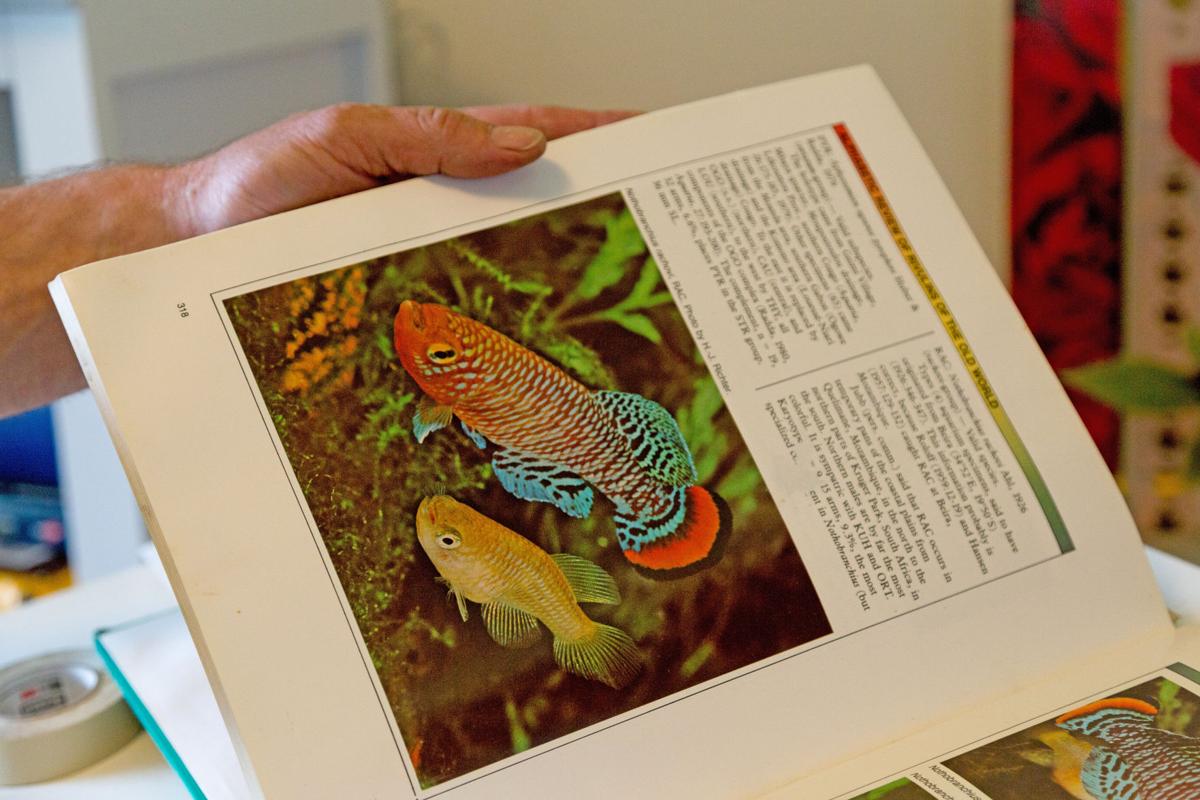 In his late 20s, Baumann was a renown killifish breeder in Taiwan. The colorful, short-lived fish became popular pets for aquarists.

Richard Baumann, 54, grows nearly a dozen different varieties of microgreens in the basement of the Long Beach home. “I'm starting off small but I plan to grow it big,” he said.

Initially introduced as flavor component for fine dining restaurants, microgreens have been around since the 1980s. Baumann is hopeful to bring more awareness to the health benefits of microgreens and supply coastal restaurants and markets.

A business major in college, Baumann always had a passion for biology and working with living things. After years of working a stressful job as a resort manager, he quit to pursue his passion and run his own business.

Baumann has been delivering the majority of his microgreens but is hopeful to expand to local stores and markets.

In his late 20s, Baumann was a renown killifish breeder in Taiwan. The colorful, short-lived fish became popular pets for aquarists.

LONG BEACH — Richard Baumann has big plans for his micro business. In May, Baumann, 54, launched Peninsula Microgreens Farm with the goal of making the mini greens more mainstream.

“I’m starting the company small but I plan to grow it big,” said Baumann holding a tray of China Rose radish, one of nearly a dozen different microgreens he’s harvesting weekly in the basement his Long Beach home.

“I think the potential is there,” he said. “This is just the beginning.”

Microgreens, not to be confused with sprouts or baby greens, is a marketing term for the shoots of salad vegetables picked after their first leaves have developed. According to the United States Department of Agriculture (USDA), the origin of microgreens is rooted in California in the 1980s, where they started primarily as a flavor component for fine dining restaurants. Since then, the use and awareness of microgreens has grown albeit somewhat slowly. They are commonly found in heath food stores and farmer’s markets, but remain largely unfamiliar to many.

The most common question Baumann fields is simply: ‘What are microgreens?’

“They are the same vegetables you eat everyday like lettuce, beets, radish, broccoli, parsley, sunflower shoots, pea shoots — all things you would have in your garden,” Baumann routinely explains. “They’re everything you would go to the supermarket to buy, only we don’t grow them to full size.”

Unlike conventional farming, where produce is usually deliberately spaced and grown to maturity under sunlight, microgreens are grown densely under ultraviolet or LED lights and harvested early, after about 10 to 20 days, when only inches tall. The China rose radish, for instance, goes from seed to harvest in about seven days. Conversely, the Swiss chard can take up to 21 days. The early harvest has benefits according to Bauman.

“They’re packed full of nutrients and life force,” he said. “All the nutrients that are required to grow a seed into a plant, are in there. That’s why they’re a superfood.”

Baumann officially announced he was open for business in early May on a community Facebook forum. His farm is located in the basement of his Long Beach home, where trays of microgreens are sprouted from seeds weekly. Baumann grows several varieties including: pea shoots, sunflower shoots, broccoli, kale, arugula, China rose radish, spicy oriental mustard, red ruby Swiss chard and purple Vienna kohlrabi. He recommends the sunflower shoots for someone new to microgreens.

“If you have kids that won’t eat vegetables, they may like sunflower shoots,” he said. “You can eat them like potato chips.”

Baumann is also growing some varieties specifically with chefs in mind including the bright pink amaranth, the purple and green Rambo radish, and a mustard plant that tastes “just like wasabi.”

A business major in college, Baumann concedes that he probably should have majored in biology instead based on his deep interest in plants and animals. His work history is intertwined with experiences between the business and biology worlds as a manager and a farmer. Most recently, before launching his microgreen business, Baumann was a manager for WorldMark resort for eight years.

“Before that, I lived in Taiwan for 18 years and had some businesses over there. Before that, I rode around the world on a bicycle for about five years. Before that, I was in the hotel industry as a manager, when I was very young. When I came back to the U.S. I started working for WorldMark. I quit the resort business when I was a young man and went traveling overseas. When I came back to America, I didn’t really know what I was going to do. I didn’t think I could entrepreneur here like I did overseas.”

In Taiwan, Baumann taught English and pursued other interests.

“I had a lot of free time to pursue things I really love to do, and that’s when I started breeding and raising fish,” he said. “In a short amount of time I became an expert.”

At age 27, Baumann launched his first business as a fish breeder. Eventually he consulted to designed and build fish farms used to raise killifish, a short-lived, freshwater ‘hobby fish’ coveted by aquarists for their colors.

“People breed them and raise them at home,” he explained. “They’re small, beautiful and many different varieties.”

Among the more than 1,000 killifish species, Bauman focused his efforts on breeding varieties that had rare and unique color characteristics, such as brighter reds and bolder yellows.

Killifish commonly live in rivers and lakes. Some, however, are extremely rare and only found in niche habitats, Baumann explained.

“There are rare killifish that live in elephant footprints,” he said. “It’s the only place you’ll ever find them.”

“In fact I had my own monthly magazine column in Taiwan which was the biggest aquatic magazine in Asia,” he said. “I did really well for about 10 years. But Taiwan is, as everybody knows, the king of copying things and fish are no different. I wrote and shared articles about how to raise and breed these fish — killifish were a new industry in Asia at the time. After about six years, the bigger fish farms in Taiwan started breeding my fish. After 10 years, I had stiff competition in Taiwan. The competition in the exotic fish industry is really fierce and I basically got put out of business by the bigger farms. And that’s when I decided to move back to America.”

When Baumann returned to the U.S., he resumed a career as a resort manager, but the entrepreneurial bug bit again.

“I decided I didn’t want to work for a big company anymore, and I quit that job two years ago and decided to start my own business,” he said. In Taiwan, the seed for a microgreen farm was first planted.

“While I was an indoor fish farmer [in Taiwan], the idea of vertically-farming microgreens came up,” he said. “Microgreens came on my radar again while I researching different things to do.”

The transition from raising fish to farming was natural.

“To adapt (from fish farming) to growing plants, it may not seem like a very close relationship but it is,” Baumann explained. “They’re biological systems and you create environments to make sure they have the right conditions to live, grow and thrive. That’s what I did with fish, and now it’s what I’m doing with plants.”

Baumann sees potential with the business, particularly among chefs and the health-minded consumers.

“The only challenge I’m running into is people don’t know a lot about them, but that’s changing,” he said. “We’re going to be the people that have them when people start wanting them.”

After researching area restaurants and talking to local chefs, Baumann was encouraged about the possibilities.

“Between here and Cannon Beach there are a lot of really nice restaurants that would love to have microgreens available,” he said. “After that, I’m going to look at Portland. If I can serve the Portland market, I think that will grow this business as big as I want to get. I researched it and decided there was a market there for it — and a bigger market to be developed. Only about 20 percent of the people I meet know what microgreens are, but that 20 percent is a viable market to start a business on. I plan to introduce it to the other 80 percent and get them into supermarkets.”

In Canadian supermarkets, for instance, the industry is more mainstream using commercial production.

“They have machines to harvest flats of microgreens. That’s how big the market is in Canada,” Baumann said. “Here in America, people don’t know about them like that yet, but they will. Microgreens are kind of like killifish. They’re one of those things that are on the edge of public awareness.”