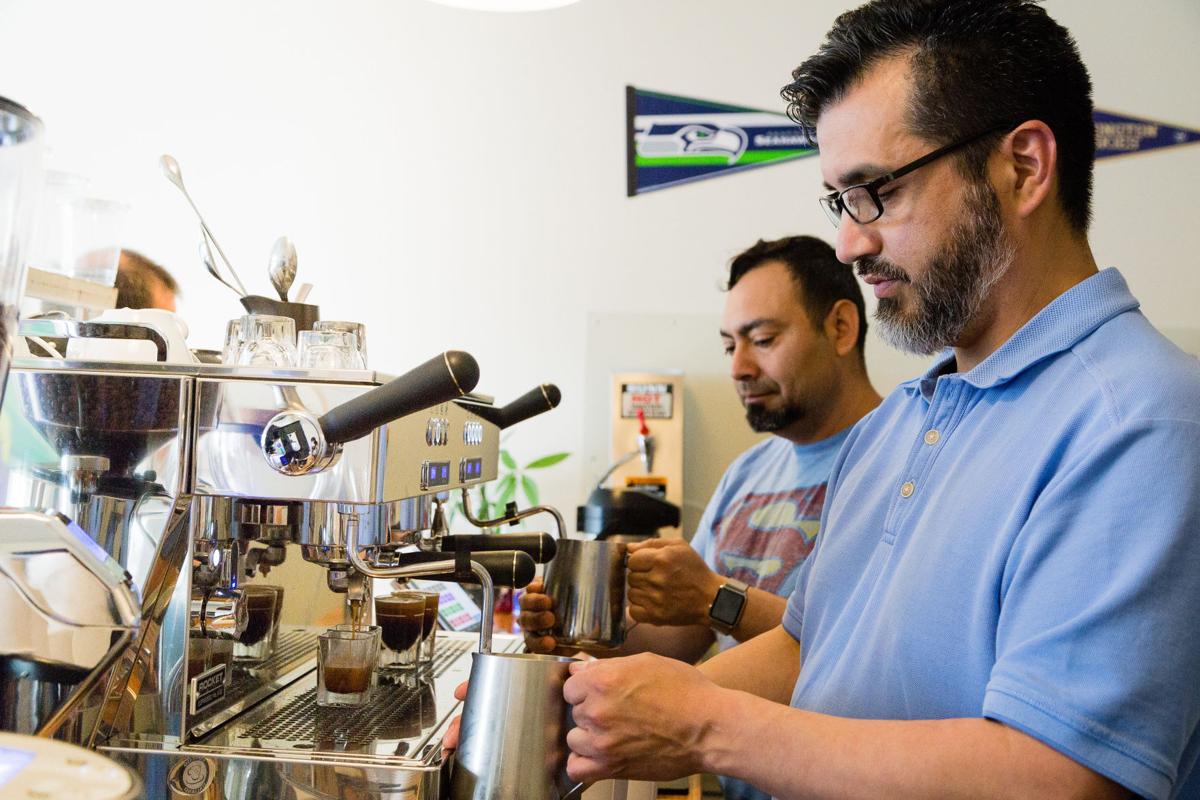 Vietnamese coffee, Mexican hot cocoa and brown sugar lattes are among the unique offerings at Abbracci Coffee Bar. “We're all about quality,” Muller said. “We do a grind for every cup.” 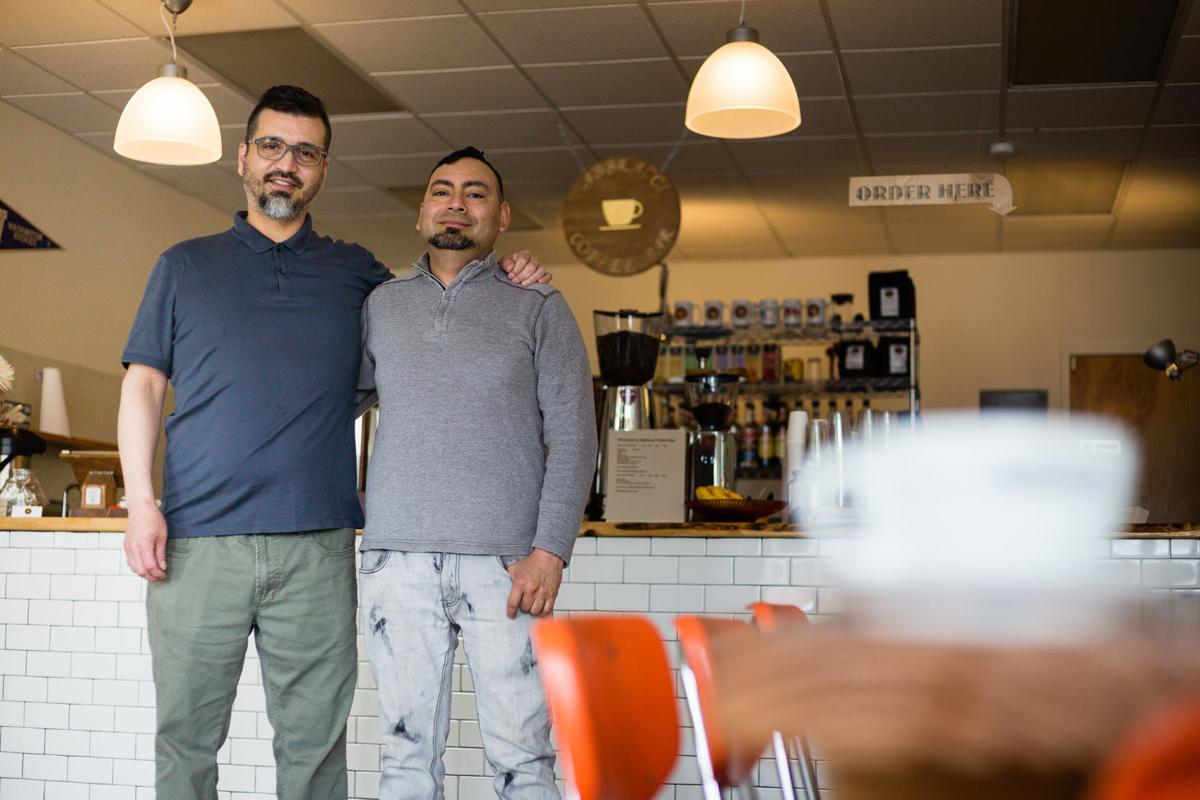 Tony Muller, 48, and Bernado Covarrubias, 39, are the owners of Abbracci Coffee Bar, located at 408 Pacific Ave. in Long Beach.

Vietnamese coffee, Mexican hot cocoa and brown sugar lattes are among the unique offerings at Abbracci Coffee Bar. “We're all about quality,” Muller said. “We do a grind for every cup.”

Tony Muller, 48, and Bernado Covarrubias, 39, are the owners of Abbracci Coffee Bar, located at 408 Pacific Ave. in Long Beach.

LONG BEACH — In one corner, a man scrolls on his laptop and stares intently at his computer screen in between sips of coffee. Across the room, a little girl’s laughter erupts over a game of checkers with her father. Moments later a group of women, weary from walking, sit down their shopping bags and order lattes. It was a typical Thursday afternoon at Abbracci Coffee Bar in downtown Long Beach.

Since quietly opening in late March, the little coffee shop owned and operated by two Seattle transplants has become in essence the community living room of Long Beach. Admittedly, owners Tony Muller, 48, and Bernardo Covarrubias, 39, may not serve the quickest cup in town. But they’re OK with that. To them, it’s all about the quality of the coffee, and offering a warm and welcoming spot to sit, relax and enjoy it.

“We’re all about quality,” Muller said. “We do a grind for every single cup.”

The coffee shop is only a few months old, but has been planned for years.

Muller, 48, grew up in Castle Rock and remembers of coming to the Peninsula with his parents to camp, clam and fish as a boy.

Muller dreamed of opening his own coffee shop in Seattle, but high rent caused him to consider other places. Ultimately he and Covarrabias decided the Peninsula offered the right opportunity at the right price. Covarrubias, 39, was born in Mexico but spent the past 19 years in Seattle, where he worked in maintenance and carpentry. His handiwork can be seen throughout the shop from the tables to the tiled service counter.

Muller and Covarrubias initially hoped to find a spot next to the Marsh’s Free Museum. In November, they secured 408 Pacific Ave., directly across from the iconic museum.

“We’ve been planning, saving and looking for space for a while,” Muller said.

There are a number of coffee stands on the Peninsula, but Muller and Covarrubias wanted to offer a sit-down cafe, especially after Long Beach Coffee Roasters closed shop in April.

“We felt we could fill a need here in Long Beach,” Muller said. So far, the local and tourist response has been strong.

“The last few weeks we’ve been getting busier and busier, the weekends have been really good. And the locals have been great,” Muller said.

Some customers have posted reviews on Yelp and Google.

“Had the brown sugar latte. Now it’s the only latte I ever want,” another said.

Next-door business owner, Paul Shaw, has become a regular. He hangs a sign on his door while he’s out having his daily cup.

They wanted to choose a name that would be simple and meaningful, and wouldn’t be misunderstood. They settled on “Abbracci,” which means “hug” in Italian. To avoid confusion from customers, they deliberately added “Bar” after the word “Coffee.”

“We had to be a little different because we aren’t roasting our own coffee,” Muller said “If we called ourselves Abbracci Coffee then people would likely expect us to have our own coffee.”

“We were like, ‘This is it!’” Muller said. “There was no question after we tried their coffee beans.”

Orders are taken one cup at a time.

“We do the traditional Italian approach,” Muller said.

“We kind of modeled it after that,” Muller said.

Soon after opening, they realized they had to add more sizes and include flavored-syrup infused options on the coast.

“Upon our first few days of opening we knew it wasn’t going to fly here,” Muller said.

He added a white mocha to the menu. It quickly became one of their best sellers.

Muller and Covarrubias also offer more unusual choices. Vietnamese coffee is a mainstay on their marker board menu.

“It’s a double shot of espresso, then we put add a big spoonful of sweet, condensed milk and pack the cup with ice and stir it up,” Muller said.

The drink has become so popular that it sold out Memorial Day weekend.

“It’s fun to do something people aren’t used to,” Muller said.