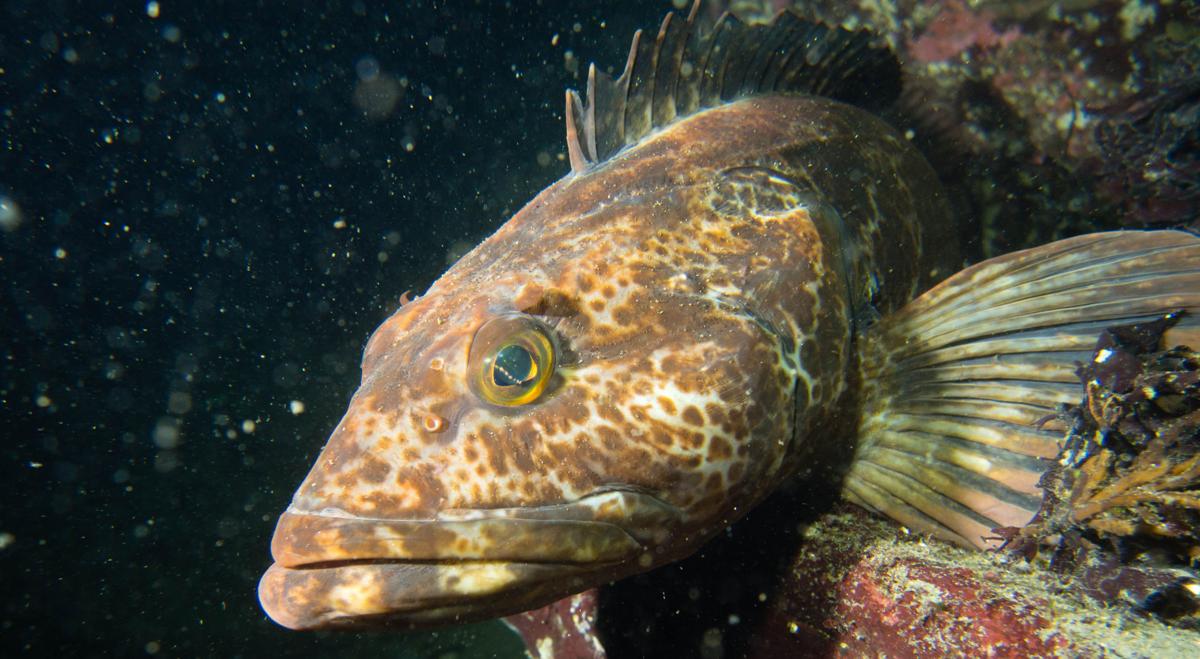 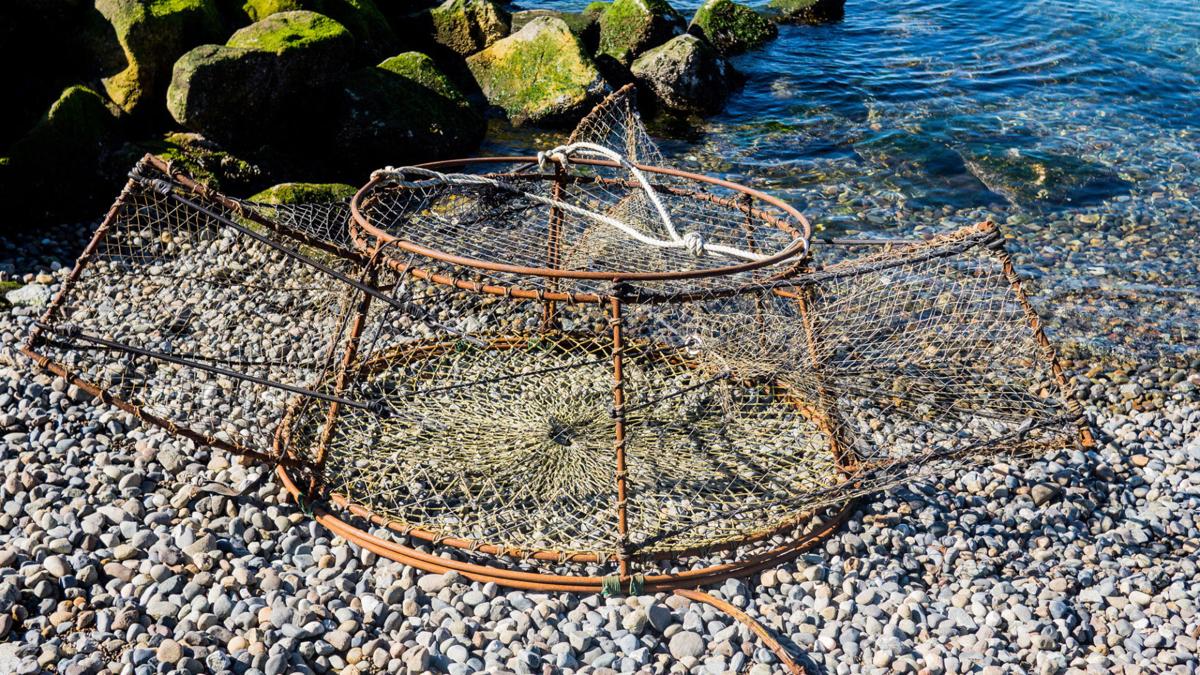 An example of the new lingcod fishing gear. The two “wings” guide fish into tunnels that lead into the main chamber. A grid resembling a tic-tac-toe board keeps large flat fish (like halibut) out, while letting lingcod in. If other fish do get inside the chamber, the trap is designed to let smaller fish swim out through the sides and top and flat fish shimmy out the bottom. 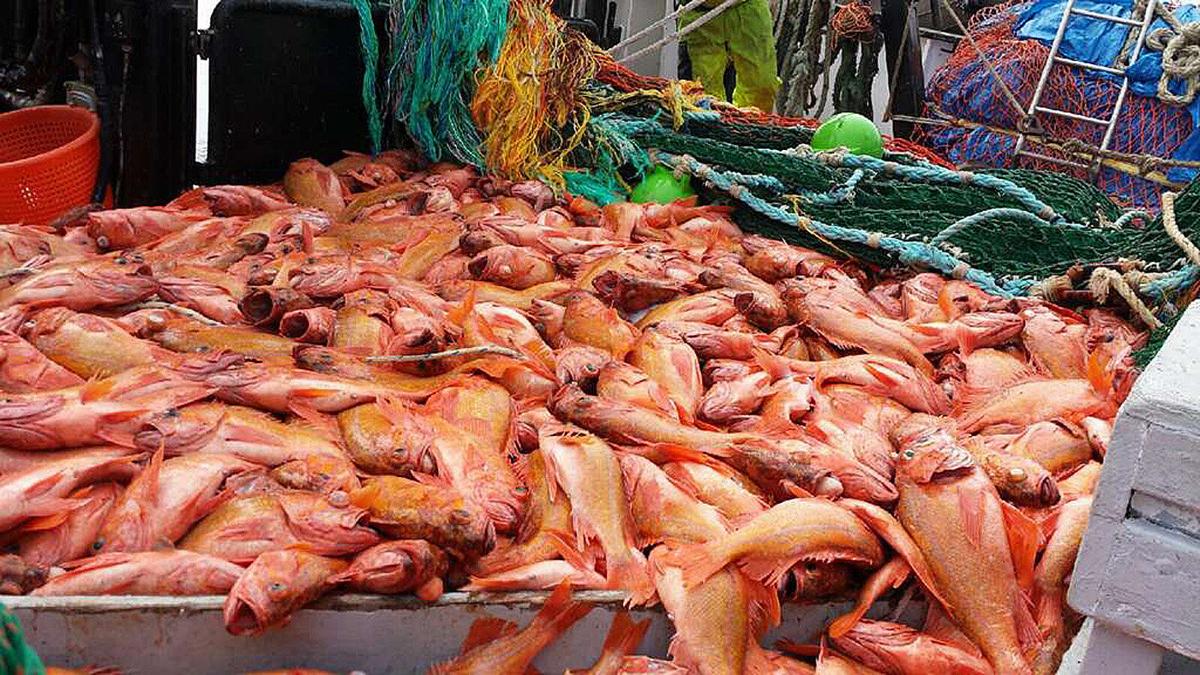 Rockfish caught off the Washington coast. 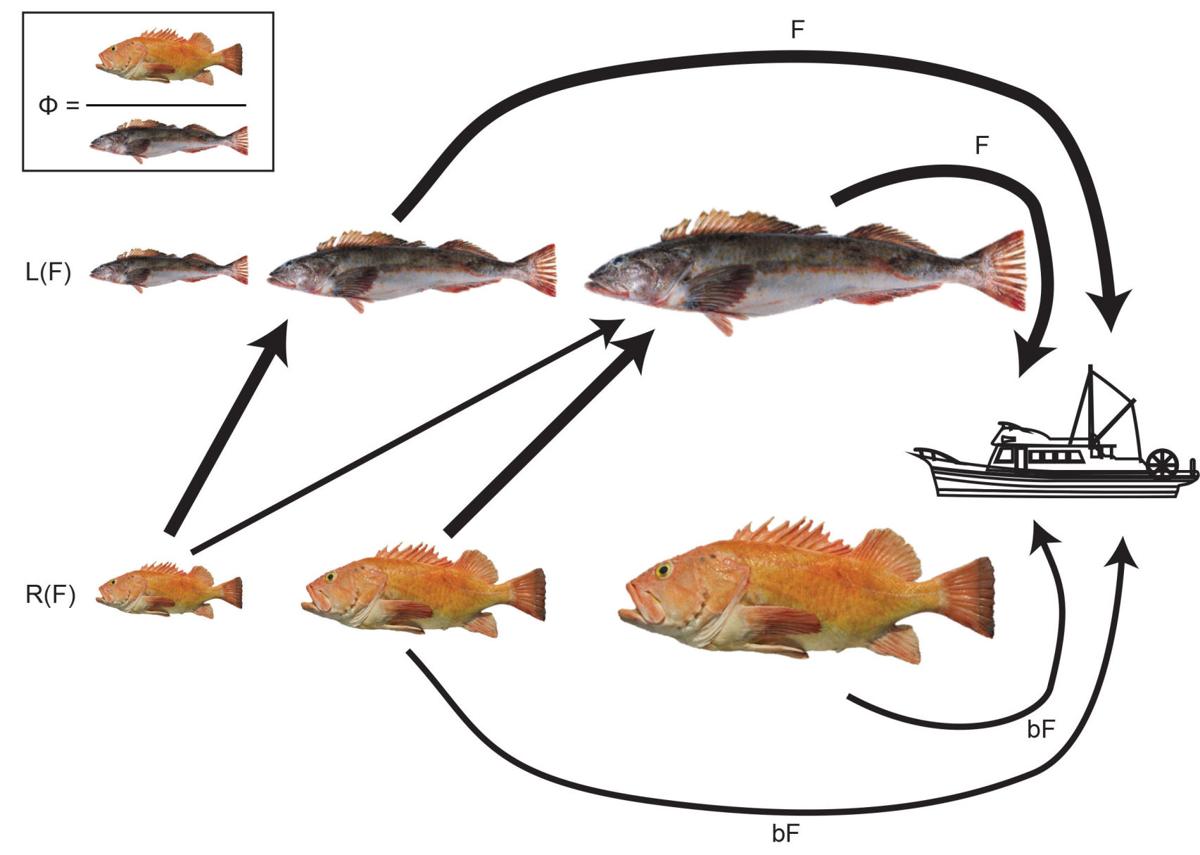 This diagram illustrates the dynamics of lingcod (top) and rockfish. Arrows represent mortality — through fishing or eating — and widths approximate the relative numbers of fish.

An example of the new lingcod fishing gear. The two “wings” guide fish into tunnels that lead into the main chamber. A grid resembling a tic-tac-toe board keeps large flat fish (like halibut) out, while letting lingcod in. If other fish do get inside the chamber, the trap is designed to let smaller fish swim out through the sides and top and flat fish shimmy out the bottom.

Rockfish caught off the Washington coast.

This diagram illustrates the dynamics of lingcod (top) and rockfish. Arrows represent mortality — through fishing or eating — and widths approximate the relative numbers of fish.

Ilwaco fishermen came up with an idea to use a different method to catch lingcod without bothering other fish. Now, their proposal is under study by scientists from the University of Washington and The Nature Conservancy, with tests planned for the new gear in lingcod-heavy waters along Washington and Oregon next year.

With input from area fishermen, ecologists from TNC developed a lingcod trap that looks much like a crab pot, but with some added measures to allow lingcod in and push out other species. UW is looking into population-wide effects of introducing a limited lingcod fishery, which formed the basis for this study.

“Fishermen by nature are innovators,” said Jodie Toft, TNC senior marine ecologist. “One really good thing about this project is it’s opened up a lot of good discussion among fishermen from California all the way up to British Columbia. We’re in a good position to collect ideas, move them forward, and get gear in the water and start testing.”

Along the West Coast, lingcod are top predators — voracious eaters that aren’t picky about where their next meal comes from.

Lingcod in the Pacific Ocean used to be overfished, to the point where managers created protected areas for these fish and other depleted groundfish species, such as yelloweye and canary rockfish.

Lingcod have recovered well with commercial and recreational fishing restrictions and closures, called rockfish conservation areas, and now are benefiting from these “safe zones” where they can escape the net of a fisherman. In contrast, some rockfish species also designated as overfished haven’t yet recovered, even with vast fishing closures.

Now, UW has been looking at whether fishing for lingcod in closed areas using the new traps could allow sensitive species to continue recovering. Their study, published in May in the ICES Journal of Marine Science, found that selectively fishing for lingcod in protected areas actually avoided hampering the recovery of other fish, including rockfish species listed as overfished.

“If we can use our specific knowledge of the ecosystem, we might be able to manage these conservation areas a bit more creatively — and hopefully benefit both the fishing and fish communities,” said lead author Kiva Oken, a UW doctoral student in quantitative ecology and resource management.

“I don’t think this paper means we should start fishing for lingcod right away. This is a case study that exemplifies that if we think with a system-wide perspective and we’re creative, we might be able to benefit multiple groups.”

Since 2002, large swaths of the Pacific Ocean from Baja to Vancouver Island have been closed to trawl fishing, a method that pulls nets along the seafloor and scoops up a lot of unintended marine plants and fish species. Trawling, while effective in catching an abundance of fish quickly, has had negative impacts on some groundfish populations, including rockfish species and lingcod.

While fishing closures have helped to rebuild some species, others still flounder due to lower reproduction and growth rates. Robust species like lingcod also eat the juvenile fish of these slower-growing species, further defeating their chances of recovery.

UW scientists examined this predator-prey relationship between lingcod and rockfish to see if allowing lingcod fishing in rockfish conservation areas could take some of the pressure off of rockfish and let small juveniles grow bigger and stronger to rival lingcod. Their models showed that modestly fishing for lingcod in these areas using different, more selective gear could avoid harming rockfish. It would also benefit fishermen and could bring more tasty fish to the market.

“This is about the ability to actually use a resource that’s out there — lingcod, which is now a really reproductive and healthy stock,” said senior author Tim Essington, UW professor and associate director of the School of Aquatic and Fishery Sciences.

The UW researchers caution this is a pilot study to explore a different approach to ecosystem management, and more information must be collected before the conservation areas could support fishing. It’s critical to understand lingcod diets, including how much rockfish they eat and what size is palatable.

Permits will be needed to test the new gear in conservation areas that are closed to use of pot gear, where concentrations of lingcod are higher.

Additionally, scientists at the National Oceanic and Atmospheric Administration will continue to study the diets of lingcod to better understand their feeding habits.

—Reporting by Michelle Ma of UW News and Information.