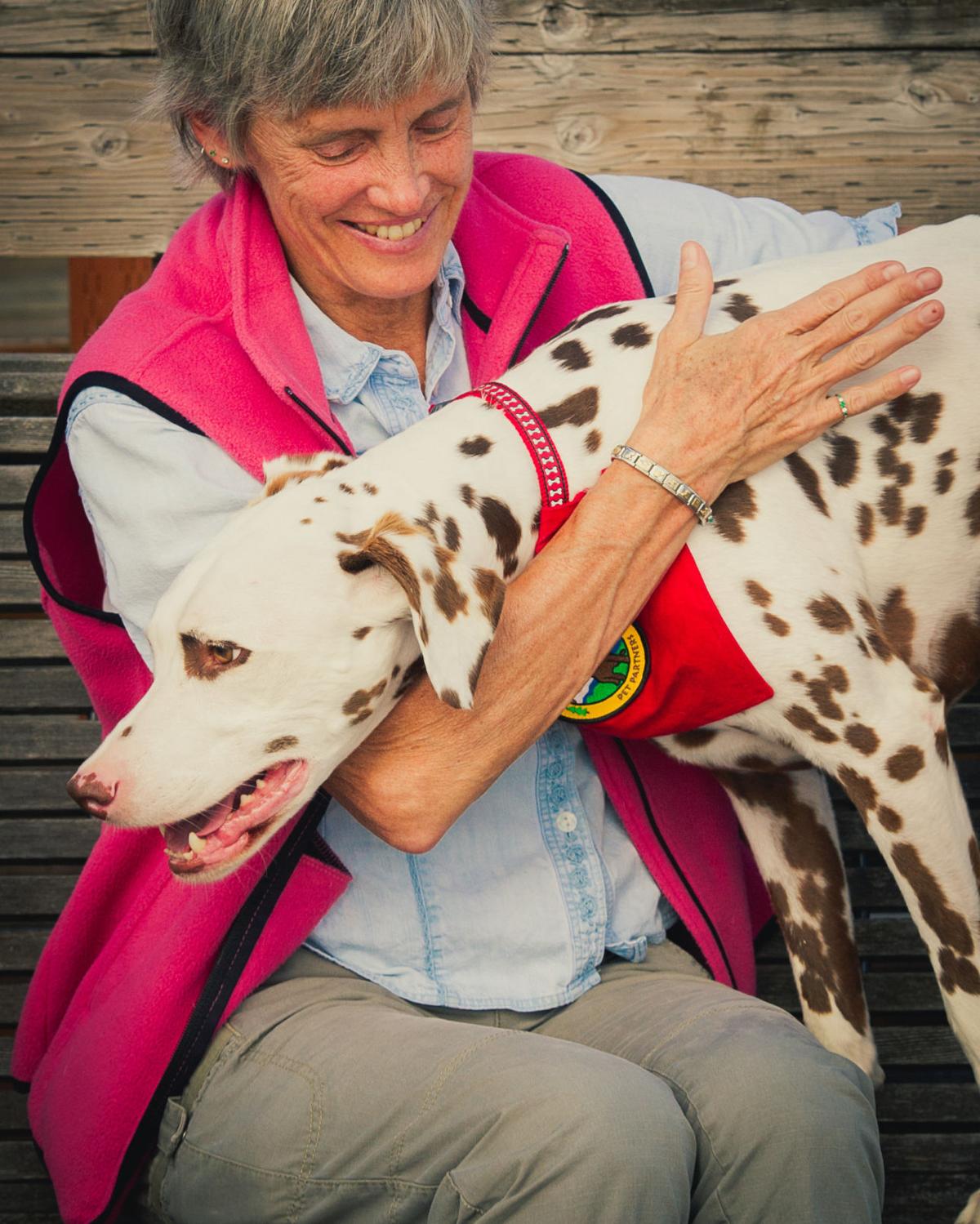 Betsy Lang, a volunteer at Columbia Memorial Hopital, poses for a photo with “Alvin”, one of the dogs in the Pet Therapy Program. 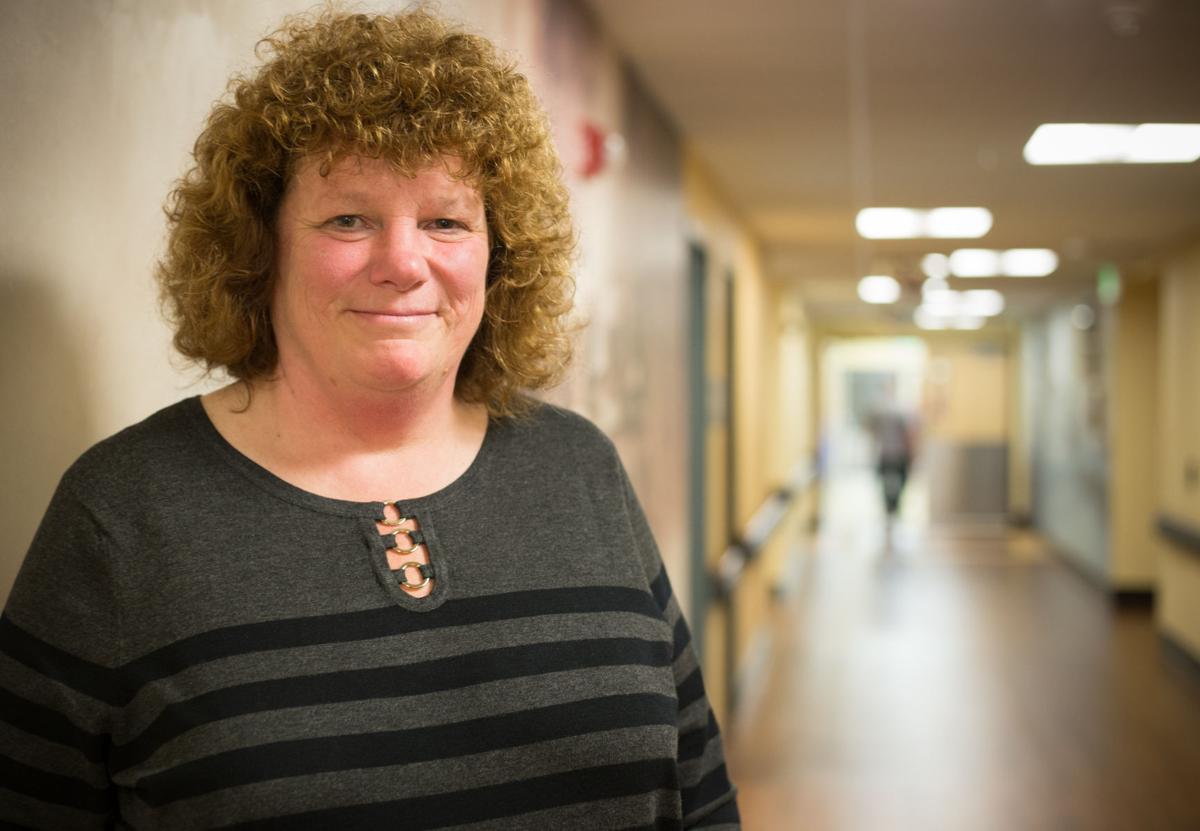 “Our environment, and where we are mentally, affects our health,” said Patient Centered Care Supervisor Cindy Nemlowill, “The holistic healthcare things we do remove obstacles to help them heal.”

Betsy Lang, a volunteer at Columbia Memorial Hopital, poses for a photo with “Alvin”, one of the dogs in the Pet Therapy Program.

“Our environment, and where we are mentally, affects our health,” said Patient Centered Care Supervisor Cindy Nemlowill, “The holistic healthcare things we do remove obstacles to help them heal.”

ASTORIA — Surgery, sickness, pills and prescriptions can leave patients feeling helpless in the face of injury or failing health, however a new program is growing and giving patients more control and ways to manage their own recovery.

“You’re there because you’re sick, hurt or about to deliver a baby, all of which are very stressful,” said Dr. Jarrod Karnofski, vice president of ancillary & support services at Columbia Memorial Hospital (CMH). (Karnofski is a 1998 graduate of Ilwaco High School.)

“When you’re in the hospital, people often feel like they’re out of control but these services help patients customize and control their care,” Karnofski said. It all began with the massage therapy program in 2001 and has since grown to include aromatherapy, pet therapy, reiki, tai chi and yoga. All are part of the evolving Integrative Therapies program now complimenting traditional medicine at CMH.

“Our environment, and where we are mentally, affects our health,” said Patient Centered Care Supervisor Cindy Nemlowill. “The holistic healthcare things we do remove obstacles to help them heal.”

Massage therapy is the most popular program. A simple foot or hand massage can alleviate anxiety and open a pathway for healing.

“We began with offering it a couple days a week, and now we’re offering it five days a week, with the occasional evening and weekend,” Karnofski said. Currently there are three massage therapists including Dianne Blossom, Amy Finn and Evandro Felho. Evandro and Amy work predominantly in the hospital and oncology center often treating patients receiving chemotherapy.

“We definitely plan on continuing those programs as we build the new cancer care center. We’ll have an integrative therapist clinic in the center. Patients will have the option of getting a full body massage and quick 10-15 minute sessions as a complimentary thing,” Karnofski said. The massages are free for patients and a small fee for staff during breaks.

“We actually have pets that come visit. They come about three times per week,” Nemlowill said regarding the five pet partner certified teams that visit CMH facilities. Among them is volunteer Betsy Lang who routinely brings her Dalmatian “Alvin”. The company of a pet can help reduce blood pressure, stress and anxiety levels while stimulating the release of endorphins, according to Nemlowill. Visits from personal pets are also possible.

“Some patients are here for days and the only thing they have at home is their dog,” Nemlowill said. “We’ve made arrangements to actually pick up animals for them and bring them in and have them spend a few hours with the patient.” Volunteer coordinator Laura Lattig leads the program. Interested volunteers are encouraged to contact Lattig at 503-325-4321 Ext 4402.

The smell of fresh mint can help waken and rejuvenate while lavender can have a calming effect allowing patients to be more at ease.

“It’s about making people more relaxed and comfortable in addition to what we’re doing from a traditional medical standpoint,” Nemolwill said. “For example, in our imaging department if you have someone who’s a little anxious about going into the tube to get their CT or MRI, we have little sticky tabs with aroma therapy lavender. We put it on their gown and they have a faint scent of lavender as their laying on their back,” Karnofski said.

“It helps in the process. It takes their mind of the knocking and the noise involved with the process,” he said. Angela Sidlow, a local certified holistic aromatherapist, has been instrumental in the development of the program.

“Angela is a very experienced aromatherapist and reflexologist. She’s helped develop blends that help produce breast milk for the lactation specialists,” Nemlowill said. “The program has been growing since it started.

“We keep expanding it. We’ve just introduced aromatherapy for people who are addicted to nicotine. It reduces cravings and allows people to be more relaxed,” she said.

Patients suffering from cancer or chronic illness are reporting a decrease in anxiety, depression and fatigue after taking adaptive yoga classes led by Sally Anderson. Those suffering from arthritis may find relief in Tai Chi, a class taught by Venus Fromwiller. Reiki, a gentle practice intended to rebalance the energy field that practitioners believe surrounds the body, is led by JanieAnn Synder and Phil Morgan.

Volunteers play an essential role in the overall experience at CMH, even during the most difficult times.

“We have a no one dies alone (NODA) program. Our volunteers sit with people who don’t have anyone to sit with them while they’re dying,” Nemlowill said. “The volunteers are integral.” Volunteers, often church members or former employees of CMH, will come in and pray with patients, sit by their side and read books.

“There are a lot of studies that a person can still hear even if they’re not able to verbalize or appear to be sleeping,” Karnofski said.

For the past two years, CMH has been embracing the idea with inclusion of “R&R Rooms,” or rest and rejuvenation rooms where staff can receive as personal massage or simply take a few minutes to themselves complete with reading and artistic outlets.

“Healthcare is a very taxing and stressful industry. You’re open 24/7. There’s people come here in all states of mind and we have to deal with very traumatic events,” Karnofski said. The hospital also offers group called (SAGE, or support for adverse group events, which functions as support following traumatic events. Meanwhile, a garden started by staff and community members has been steadily growing.

“It’s a beautiful, reflective area,” Nemlowill said. “It encourages people to have take time to quiet their mind.” Staff and volunteer community members have been contributing to the garden for the past two years after upkeep of the space, formerly known as “The Garden of Memories.” With the help of staff and community volunteers, new soil was spread, benches were built and a variety plants and flowers were placed creating a botanical reprieve in the heart of the hospital.

“We kind of look at this as innovative therapy — we’re always trying to evolve the program,” Nemlowill said.