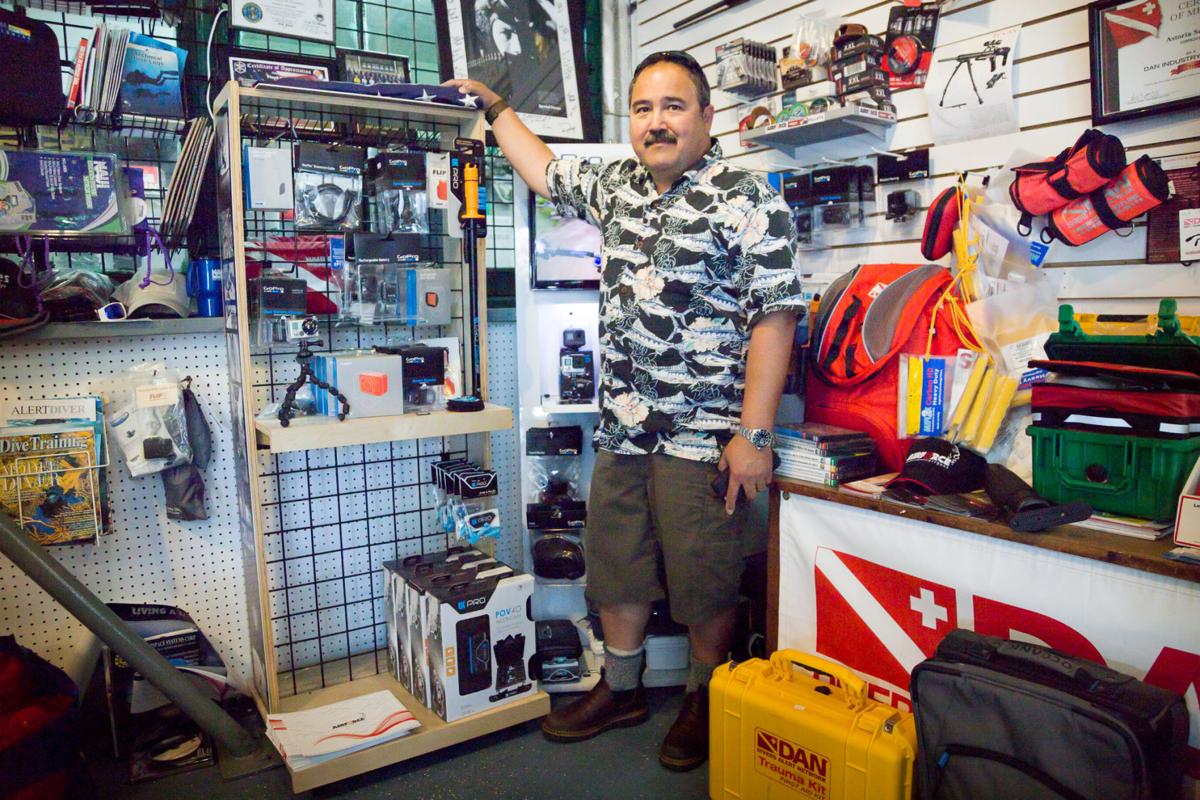 Floyd Holcom, 53, started diving at age 18 as a member of the Army's 82nd Airborne Division. Holcom has since trained hundreds of divers. 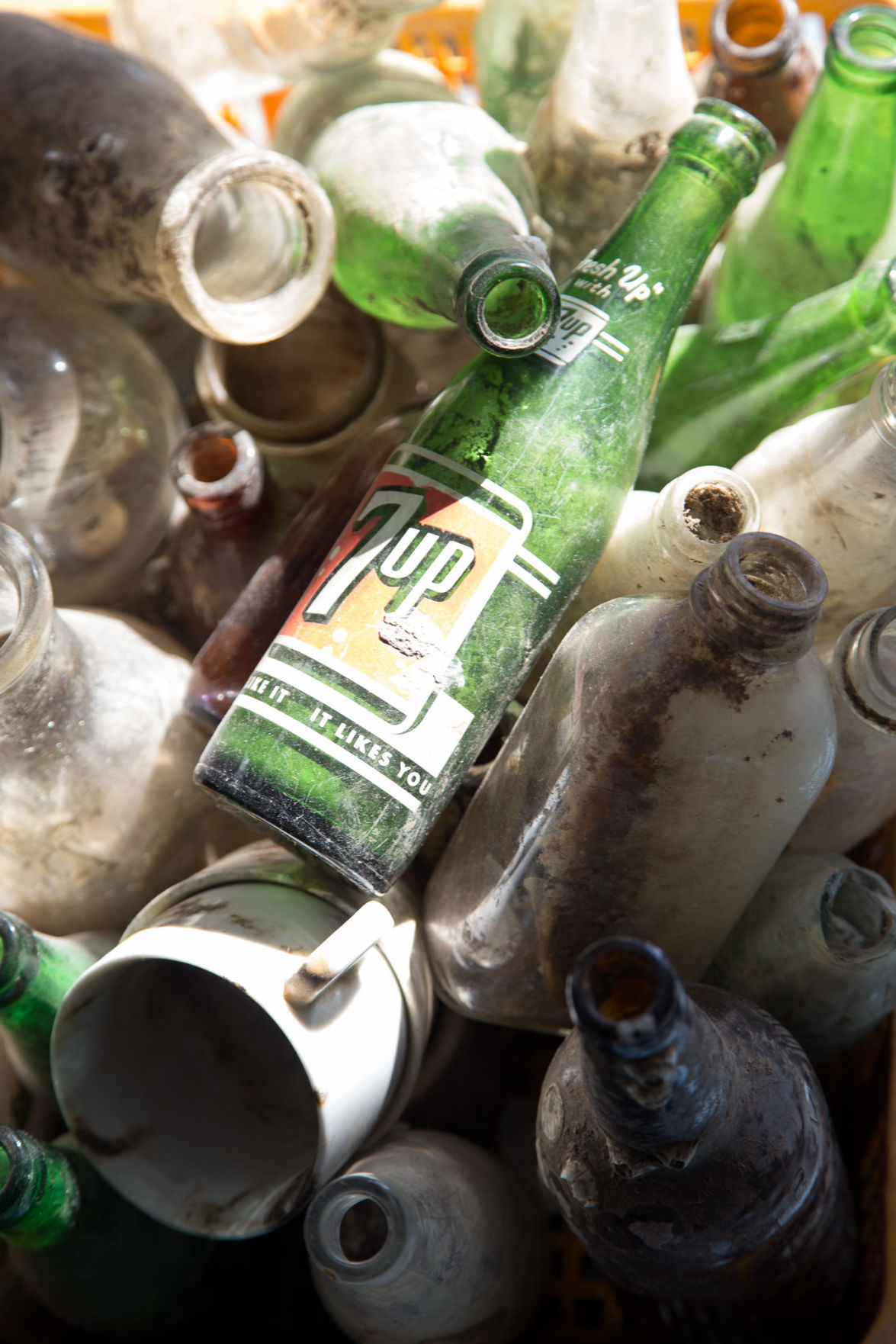 Bottles of all sizes and ages line the window in Astoria Scuba and Kayak. In 2002, Holcom found a bottle in the Columbia River from the early 1800s estimated to be worth $10,000. “That's the best part about diving,” he said. “You're exploring.”

Floyd Holcom, 53, started diving at age 18 as a member of the Army's 82nd Airborne Division. Holcom has since trained hundreds of divers.

Bottles of all sizes and ages line the window in Astoria Scuba and Kayak. In 2002, Holcom found a bottle in the Columbia River from the early 1800s estimated to be worth $10,000. “That's the best part about diving,” he said. “You're exploring.”

“I first started diving when I was 18, when I was in the (Army) 82nd Airborne Division in North Carolina. Then when I was in the 307th Engineer Battalion, several of us went down to the local scuba shop and took a class. I’ve been diving ever since.”

“My favorite diving spot in Vanuatu where I dove on the S.S. Calvin Coolidge. It was a luxury liner that was converted into a troop ship for WWII. I was there on an Army trip advising the Vanuatu military, and we got to dive. The visibility was 100 feet plus, and the water was above 80 degrees. Inside the ship was old Jeeps and WWII stuff. It was my favorite and most memorable dive.”

“Every other year we go to Stuart Cove’s in the Bahamas. They do a shark dive there that we take students to and it’s just incredible. I like diving the Caribbean, but unfortunately I don’t think we will be diving there this year.”

“I’ve been diving the Columbia since I was a teenager in Army. Most of us ‘River Rats’ were fascinated by it. Back then, the water was filled with dead sturgeon and fish guts. It wasn’t a very pleasurable dive, unlike today where it’s cleaned up a lot. Some days we’ll get five to 10 feet of visibility. It’s a challenging dive, but it’s a good teacher. We do a lot of our advanced master diver instructor training here on the Columbia. We train about 80 divers each year from the Coast Guard, Army, Navy and sheriff departments.

“We do our basic dive program in three phases. The first phase is online academics with a mandatory two-hour class at the shop that covers dive tables and physics. The second phase is 12 hours of confined water training at the Astoria Aquatic Center. Then, in phase three, we go up to the Hood Canal and do six open-water dives. The normal dive classes are about half of that training and we do it all for $399. We do everything from basic to instructor level in Astoria.”

“Yeah, I see a lot of it coming back. The main demographic of our divers is in their 40s or 50s. When diving first started, there were teenagers all the way up. I’m seeing that come back. We’re really trying to get involved with high schools and their science programs. We’ve trained about eight kids out of Astoria, but most are coming from Warrenton. We’re reaching out to Seaside now, too. Send me your high school students who want to be commercial divers, marine engineers, biologists or scientific divers for NOAA. It all starts with the basic dive program.”

“Oh yeah. The whole world is full of treasure. Some people think there’s gold in the Columbia River. That’s the best part about diving, that you’re exploring. There’s a new organization in town called M.A.S. (Maritime Archaeological Society) who have identified several things we’ve found. We exposed our secret wreck in front of Pier 39 a couple years ago to them. It was a sailing ship that hit a rock in front of the cannery in 1856. The hull is still there along with several others on the Columbia River. With modern technology, we can find these wrecks and the Maritime Archaeological Society are doing a good job with that.”

“When I first bought the pier in 2002, I dove on the bridge of the pier and I found an early 1800s blue cobalt bottle. I stuck it in water to soak. My brother was working at the pier at the time and I told him ‘Don’t do anything to that bottle and for god’s sake don’t break it.’ When I came back from the Philippines it was in pieces. He was washing off a hammer and it slipped out of hit hands and landed on the bottle and broke it. It was worth probably $10,000. There are victories and tragedies in everything we do in life and that was one of them.”

“We opened the shop when I got back from Iraq in 2005. Seaside Scuba had closed and so we decided to open a store in Astoria.”

“I’ve been diving on the Columbia so long it’s kind of like a hand-and-glove relationship. I know when to dive it and I know where the dangers are. The scariest dive I ever did was under the (Samuel) Elmore Cannery in the ‘80s before it burnt down. I usually would dive by myself at that time and I was diving along the shoreline looking at big crawdads. Inadvertently I swam into a coil of one-inch cable and suddenly came to a stop. I couldn’t cut through the coiled cable so I slowly took deep breaths and maneuvered my way out. I could have easily been trapped down there like a fish. I realized that there are some pretty dangerous things out there. A diver really has to know what they’re doing and not panic.”