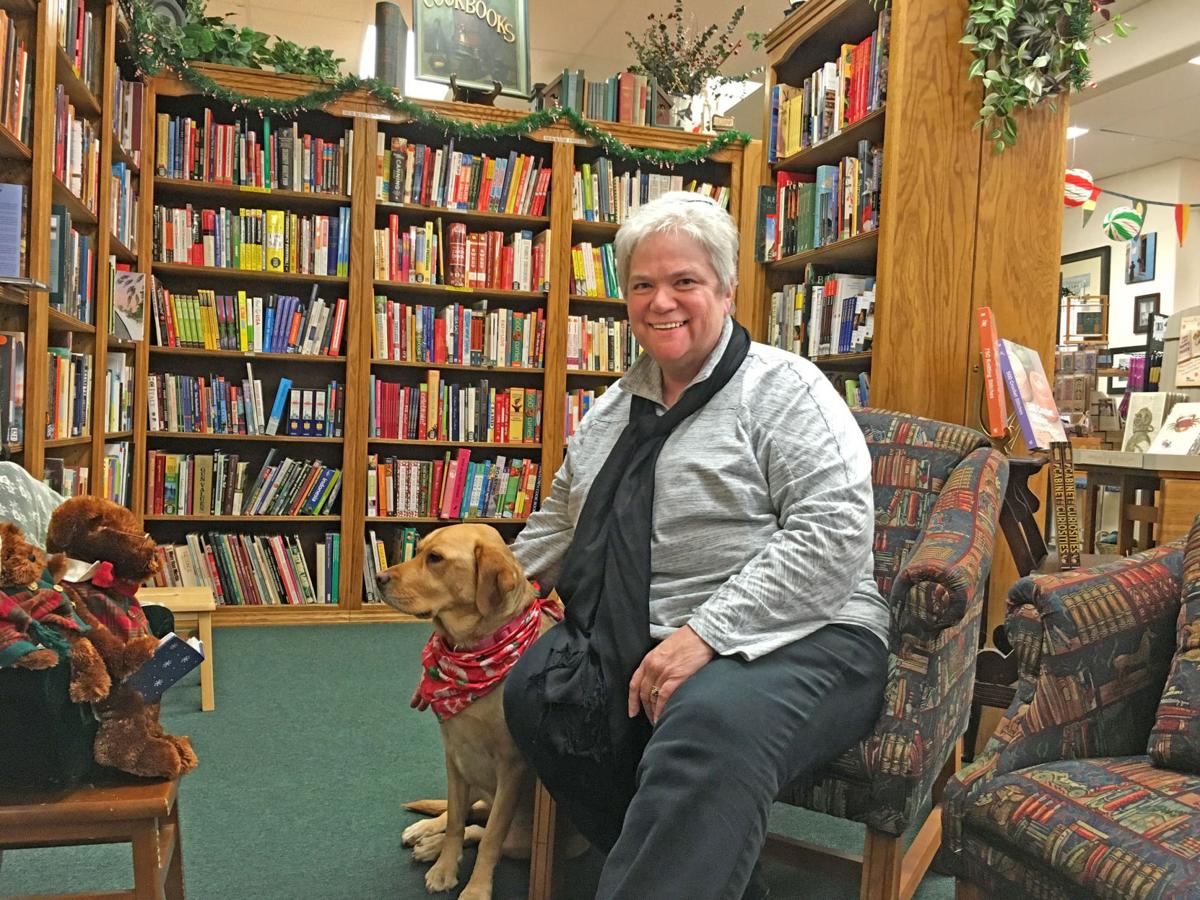 What made you want to open a bookstore?

We’ve expanded a couple times. (When) we started off we were just this tiny, little hallway and we did one expansion and then we bought the building and did the big expansion. Then we expanded into, there was an empty space next door and we took the wall out and put the children’s section over there.

What trends in books have you seen?

The trends kind of cycle. I do have to say the Pacific Northwest — and of course I live here so I’m a little biased — seems to set the trend for the rest of the United States with books. There will be a book that’s flying under the radar and Pacific Northwest booksellers will start hand selling something, pick it up, sell it, sell it (and) pretty soon you see it spreading across the country and it’s making everybody’s bestseller list. We have our own Pacific Northwest booksellers, I’ve been a member since before we opened the store, and I’m just finishing my stint as president of the board, and every region has their own bestseller list. We’ll have books on our bestseller list that don’t show up on the East Coast, but pretty soon they’ll flow over.

I think the Pacific Northwest readers are very educated readers. We’re just kind of cycling through where fiction from World War II has been very hot, and there’s some wonderful books. For a while before that it was the dystopian, end of the world — “Hunger Games,” “Station Eleven,” “Ready Player One,” which are good books. It kind of trends.

Coloring books have been huge — adult coloring books have been huge. All summer long I couldn’t keep them in stock. I can’t get a set of colored pencils, there’s this one really good set of colored pencils that I sell and it’s like (we’re) waiting, waiting. There’s like 6,000 on backorder, not from me but from different places. Coloring books, people love it. I’ve gotten into coloring myself, it’s very relaxing in the evening and I’ve gotten better. It started building over the summer and it’s been big for Christmas this year, keeping the more popular ones in stock has been kind of challenging. People love it. And it’s men, women, all walks of life it’s not any one group.

It’s the locals, bless their hearts. I’m a big proponent of shop local, shop small. Everything that we can buy, we buy locally. I grew up here and my dad worked at Dennis Company for 37 years and it’s always been kind of drilled into us that you go to the local hardware store, you go to the local lumber store. I bought a set of tires for my car — bought them locally. That’s just what we try to do. I have some really loyal local customers that get me through the winter. You’ve got to be open for the locals through the winter and that’s what keeps me going.

Do you see fluctuations in business during the fishing season?

When the fishing’s big it’s summertime. It’s kind of cute though how I’ll get the wives in or the people in waiting for a boat to come in and they’re waiting for the phone call that they’re coming around the jetty headed in. That definitely makes a difference, but it’s kind of hard to tell sometimes where it’s coming from because it’s summer anyway.

Do you have a favorite book?

I have many. I have my top 10 list and then I have my top 25 list. The No. 1 has always been “To Kill a Mockingbird,” No. 2 is “The Secret Life of Bees.” Ranking kind of jumps around. There’s one that’s out right now that I hand sold all summer called “A Man Called Ove” — it’s a Swedish book, I love that book.

How do you find the books for your store?

I decide what books come in here. They’re all hand-picked. We have a trade show every fall and then there’s a winter institute that happens every year in different places around the United States that is put on by American Booksellers Association, which is a national organization.

A major part of my reading is going through and seeing what’s upcoming, what are the latest? I have certain reviewers that I really like that I’ll read their reviews. Then I get those advance readers copies and a lot of the stuff that I get in that I really like, nobody has heard of before, but I’ve been doing this long enough that a lot of people will trust me to say ‘Oh, you’ve got to read this book, this book is great and this is what it’s about.’

Everything is handpicked — I have like three distributors that I use.

How do you manage to compete with some of the larger sellers like Amazon?

It comes down to, they can come in and see what I have where Amazon you don’t have that option. Amazon is very mechanical in that if you order this book off of Amazon they’re going to think you’re going to want all these. But that’s all programmed in, it’s not somebody saying, ‘Oh gee, you ought to read this book.’ It’s kind of programmed in.

Amazon’s the big beast and always will be. It’s education, it’s people realizing that they’ve seen a lot of stores close and the reason that they’re closing is that people weren’t shopping there. Amazon wants to be everything to everybody and people have to make that choice, that decision.

Of course that’s hurt any business — groceries, everything. Amazon has made an impact on independent businesses. When I started selling books, that’s what I sold was books. Now I have dish towels and scarves and pictures and puzzles and toys and I’ve had to diversify.

How did you get your name out at first?

It just takes time. I still have people that come in, we’ve been here 15 and a half years, and people that live here come in and say, ‘Oh I had no idea you were down here.’

It’s just longevity, it just has taken a long time and built up a faithful customer base that keeps coming back. Word of mouth, people telling people. Every year I insert a holiday catalog in the Chinook Observer that comes out every November. I think this is my ninth year doing the catalog. I’ll have people in May walk in with this catalog going, ‘Do you still have this book?’

What’s your favorite part of running the business?

The people. I have some wonderful, wonderful customers. They’re from Seattle — and not just one customer that does this — (they) call me from Seattle, say ‘We’re going to be down in two weeks, I want this book, this book and this book,’ and I’ll order it in for them and they’ll come pick them up and buy them when they’re here.

What challenges have you faced?

The industry, just the industry itself. We went through a number of years when e-books first came out, the publishers bought into the, ‘Oh, everybody is going to go (to e-books), everybody’s going to go electronic.’ So what they printed dropped, so getting stock was hard for a while. But now all of a sudden they’ve realized that, ‘Oh, we do have value, the independent bookseller has value.’ We’re the ones out there pushing the books that are — you’re always going to have your James Patterson’s and your John Grisham’s — but we’re the ones out there with the debut authors and, hand selling is what they call it, hand selling these titles.

Of course, the economy. When the economy took the tank there in ‘08, that was hard. Having to adjust.

How did you handle the business during the recession?

Being careful is how I did it. I made a pledge when we first opened that I would not close during the winter because I grew up down here and all these stores would close during the winter, it was like the local people weren’t important enough to be open for. Now I’m open seven days a week, year round. I have one part-time employee so I’m here pretty much five days a week.

Just being careful and making the determination that I was going to make it.

Do you have any memorable customer stories?

This woman came in one day to the store, and it was a busy Saturday, and the store was pretty full of people and had asked me about a particular book. So I had explained the book and the next book and his writing, we talked about the author and everything. She goes, ‘Oh well, I’m going to read that one.’ She took out her Kindle out of her purse and downloaded it just like that, just like a QR code thing.

The next day this woman — I had no idea who she was — came in, she brought me flowers. She said, ‘You know, the look on your face when that lady took her Kindle out and downloaded that book was just, you just looked crestfallen.’ I go, ‘Well I was probably mad, but OK.’

Do you have anything planned for the future?

I told my husband the next time I talk like I want to expand the store, that he’s to take a baseball bat and hit me over the head. Not right now.

I’m always on the lookout, I’ve got some new product lines I’m going to pull in for the summer, and pull them in this spring.