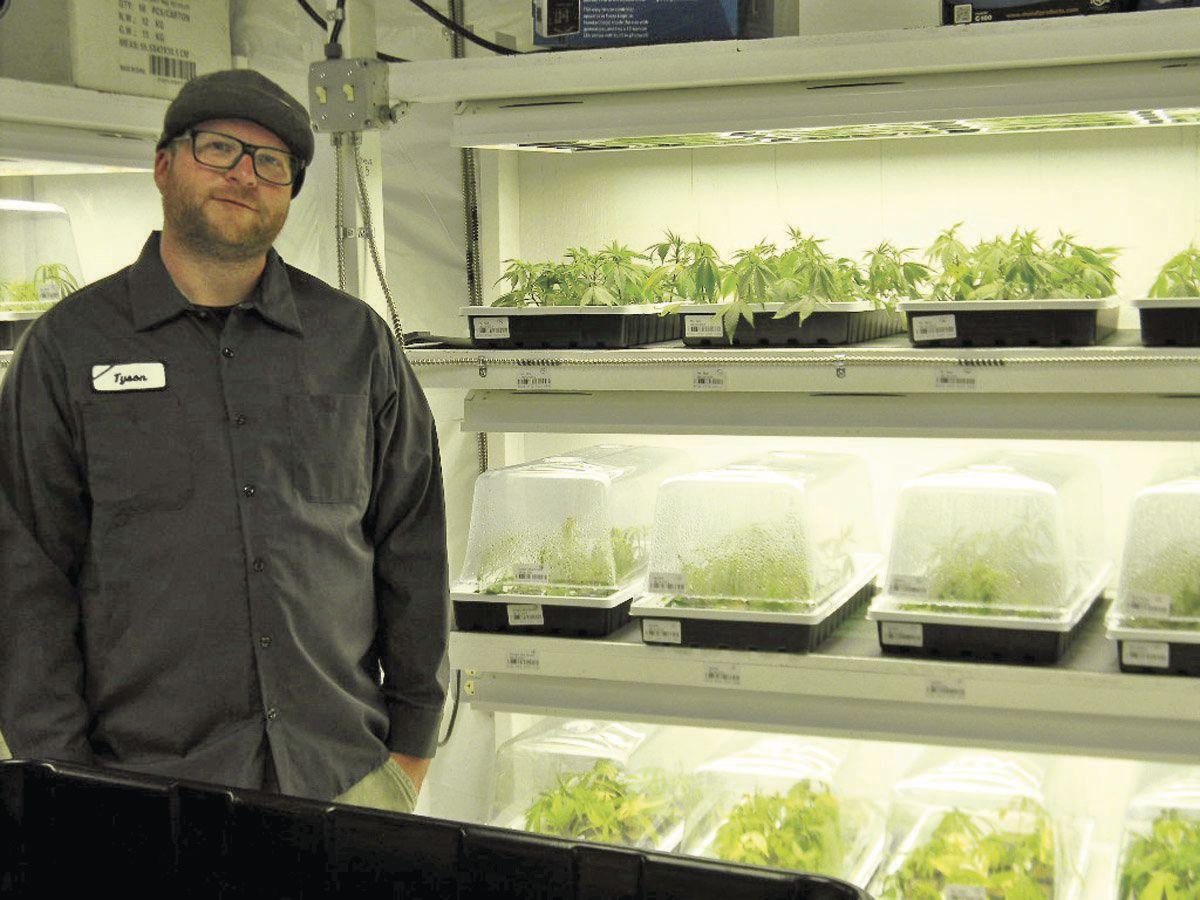 Lead grower Tyson Wood next to seedlings in the nursery. 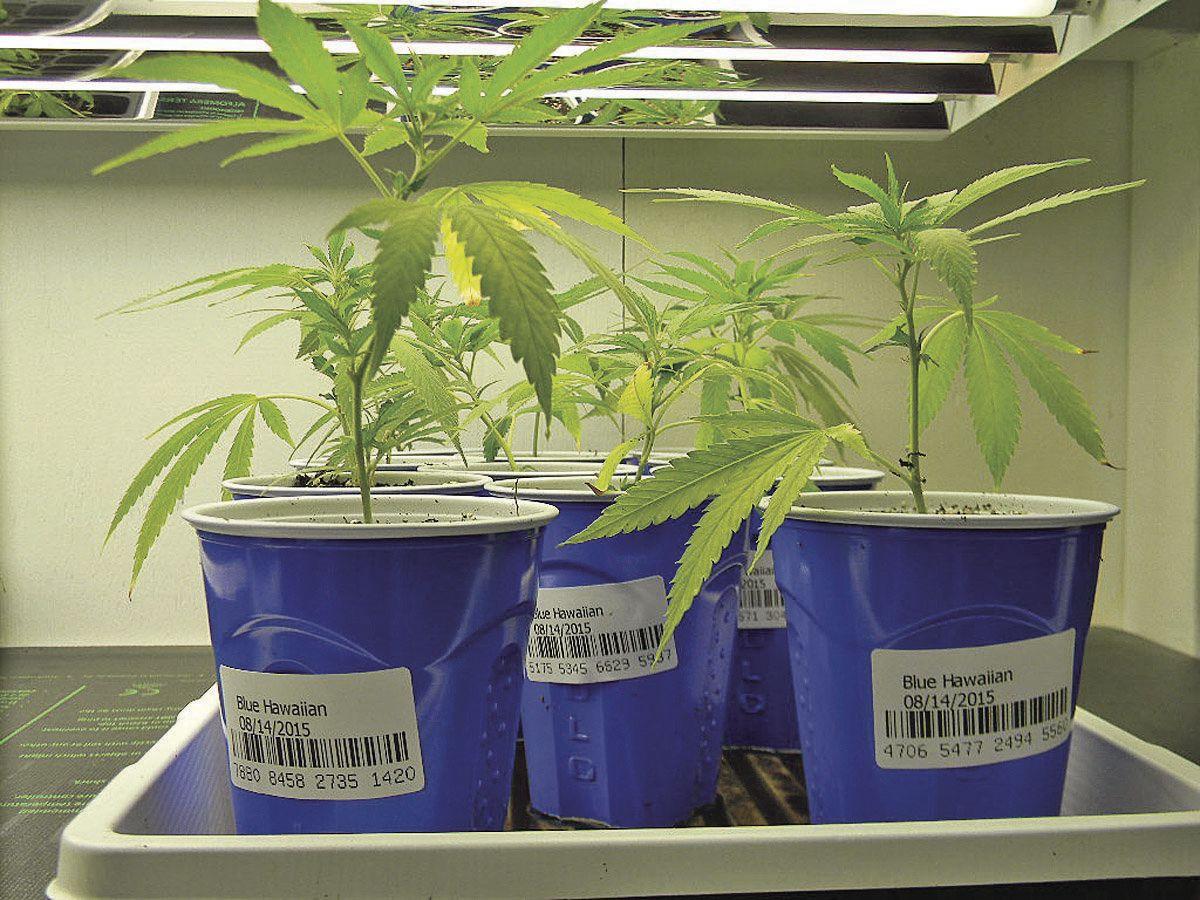 Recently rooted clones in the nursery are tagged for the state's Biotrack system. 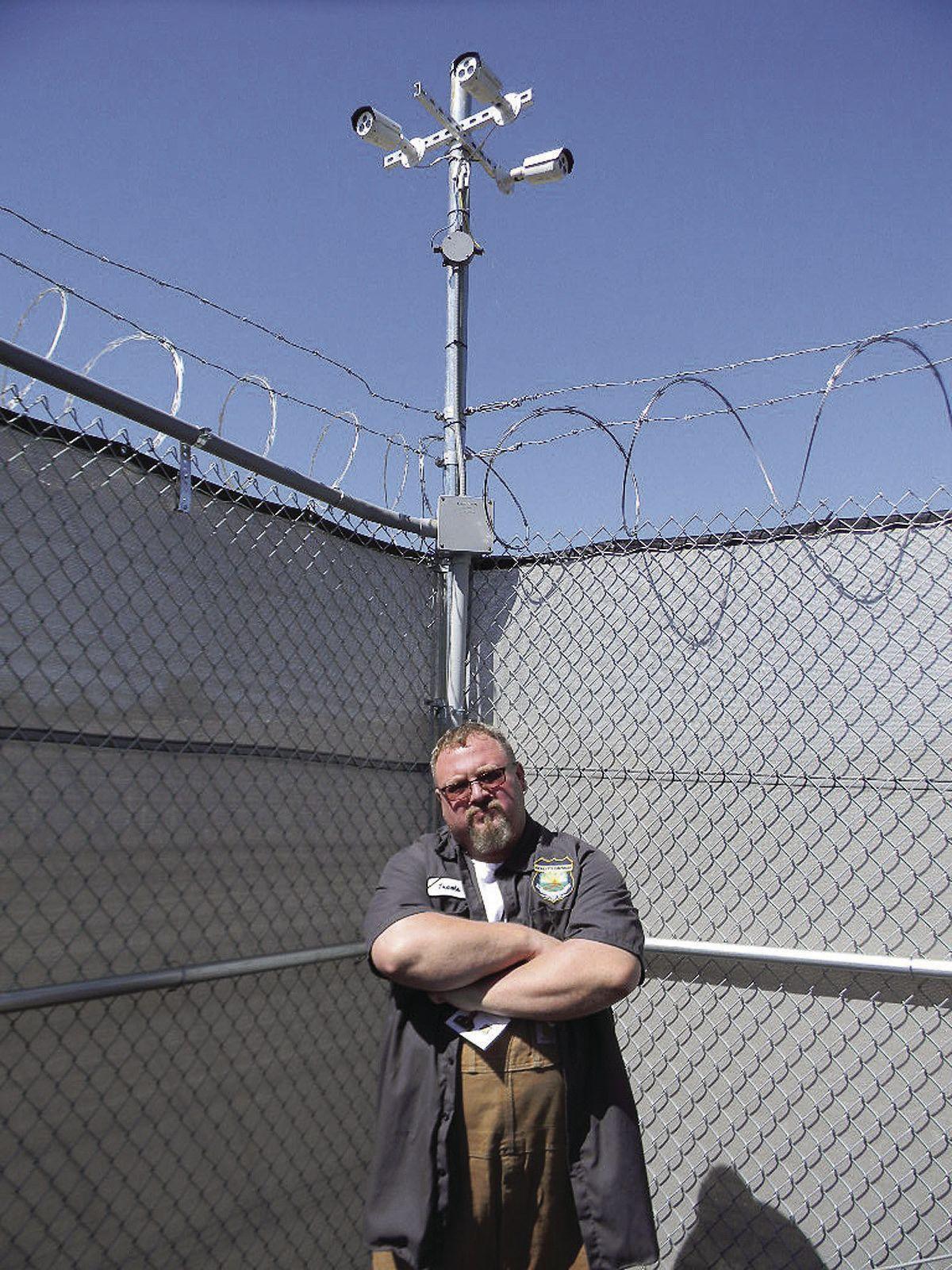 Owner Travis Holmes is confident that his security system will deter trespassing, vandalism, and theft. 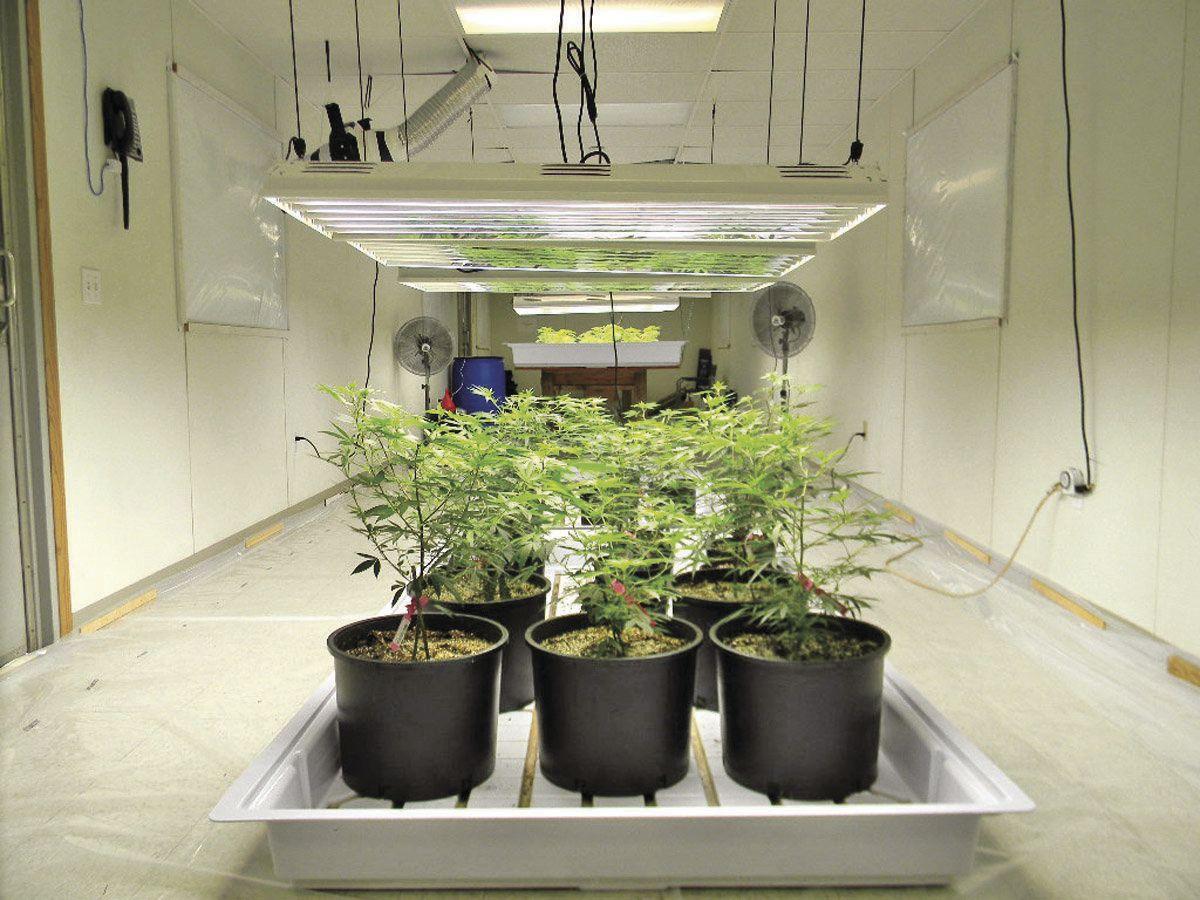 First Crop: This small group of plants in the vegetative state of development will eventually be harvested in October or November.

Lead grower Tyson Wood next to seedlings in the nursery.

Recently rooted clones in the nursery are tagged for the state's Biotrack system.

Owner Travis Holmes is confident that his security system will deter trespassing, vandalism, and theft.

First Crop: This small group of plants in the vegetative state of development will eventually be harvested in October or November.

RAYMOND — Lights are on, fans are blowing and plants are maturing in the Quality Growers warehouse. With the startup phase of their effort complete, owner Travis Holmes and his staff are fine-tuning the cultivation setup while they prepare to harvest their first crop.

According to Holmes, “the garden” has been partially operational since Aug. 6, with the first harvest anticipated to occur in October or November. “We didn’t want to wait until everything was perfect and done” before starting, he said. “We decided to start because the nursery is done.” He plans to be fully operational by November or December.

The inaugural crop, which includes several different strains, was germinated from seed. Subsequent generations have been started from a combination of seeds and clones (cuttings that come from established plants). Some of the strains being grown include Blue Dream, Dutch Treat, Alien OG and Blue Hawaiian.

Employee Tyson Wood has been starting seeds and clones while simultaneously training to oversee the entire garden. He is learning the trade from local horticulture expert and recent hire Steve Boyson.

“Learning has been a hands-on experience,” Wood said.

Wood will divide his time between the nursery, vegetative room and flowering room. These rooms provide ideal conditions for the plants through each stage of growth. All of the rooms are climate controlled with an almost clinical feel.

In the nursery, custom-made shelves house trays of seedlings and starts. Heat pads encourage root expansion below the trays and soft florescent lights shine 18 hours a day above. Both the heat pads and lights have been wired into the shelves themselves. Though all the lights are set to an automatic timer, each shelf is also controlled by an on/off switch so that Wood can save energy by turning off any shelf not in use. The shelves were designed by Holmes, who left a career as an electrician to start Quality Growers.

The vegetative and flowering rooms also have a unique electrical design created by Holmes. He says that he “went the extra mile to set it up so that individual lights can be turned on or off, instead of the entire room.” In a typical indoor grow, all of the lights would be controlled by one switch, or at the very least, large rows of lights would be grouped together. Holmes has broken up the lights “to handle a heavy load” and to make it easier to save energy by having the option to shut off any lights periodically not in use. This configuration will also help workers as they perform routine maintenance such as changing bulbs or cleaning ballasts. Though the unorthodox electrical design has meant extra work upfront, Holmes believes that it will improve efficiency overall.

Preparing to trim, package and sell

Two mobile structures have been set up outside the main warehouse. Both have thick bars on the windows and are enclosed within the security fence that surrounds the entire site. The first mobile structure is being set up as the business office and will have an area for finished goods to be packaged.

The second mobile structure will be used for trimming the harvested plants into marketable buds. Holmes plans to install a TV and sound system for all of the trim workers he will soon hire. He said that he is “very interested in hiring locally. There are plenty of the right people for the job here.” The work will be paid “piecemeal” instead of hourly.

Due to the distance between work areas and the noise from grow equipment, a phone and PA system has been installed throughout the main warehouse and outbuildings. Each room has a phone and there are loudspeakers in the largest areas of the warehouse. This was done to increase efficiency of communication and decrease “running around,” according to Holmes, who feels that the system will also enhance worker safety.

When it comes to security, Holmes said that he has “gone above and beyond” what is required by state law. In addition to a full camera system, there are sensors in each room and on all of the doors and gates.

With tight security comes the potential for a false alarm. The police have already been dispatched to Quality Growers twice since the system was installed. The first alarm went off because a gate sensor was misaligned. The second sensor was tripped by plants swaying in the garden. Holmes did not initially anticipate that wind from fans moving the plants could trip sensors. Both issues have since been corrected.

Despite two false alarms, Holmes remarked that, “Raymond PD has been excellent.” He is confident that they are prepared to respond if a real incident occurs because he has “walked them through and shown them every square inch.” The Raymond Police have also been provided with a map that lists each security system zone. This will enable them to respond more precisely to the automated alarm.

“It’s great to know that they are here to protect our personal property,” Holmes said.

Cannabis Board staff members have already been on site to ensure compliance.

“We were real nervous the first day. We’ve put a lot of work into it,” Holmes said of the initial inspection. Though “they show up with bullet proof vests and guns,” he said that his compliance officer was “cool” and “put us at ease right away.” Holmes reports that he has enjoyed establishing a willing and open relationship with the WSLCB and that his compliance officer appreciated Quality Growers’ attention to detail.

Recreational marijuana establishments are required to log data about their operation in a state-hosted program called Biotrack. Employee Ryan Rockwell has been designated to run Biotrack and he thinks things are “going well.” Holmes chose Rockwell to oversee both the garden office and Biotrack because he is “smart and methodical.” When plants are 8 inches tall, they are tagged with a barcode so that Rockwell and the state can track every plant through each stage of its life. Harvested “flowers” are tracked as batches and lots. “We document, document, document,” Rockwell said.

According to Holmes, the image Quality Growers wants to promote is “not flashy.” He prides himself on attention to detail and has made a calculated effort to create a frugal and sustainable setup.

“Energy efficiency is a priority,” he said. “We don’t want to chew up the environment to do this.”

He also feels that his cost-saving, do-it-yourself measures and thought-out work environment will help the business going forward. “We’re going to survive the first year,” he said.