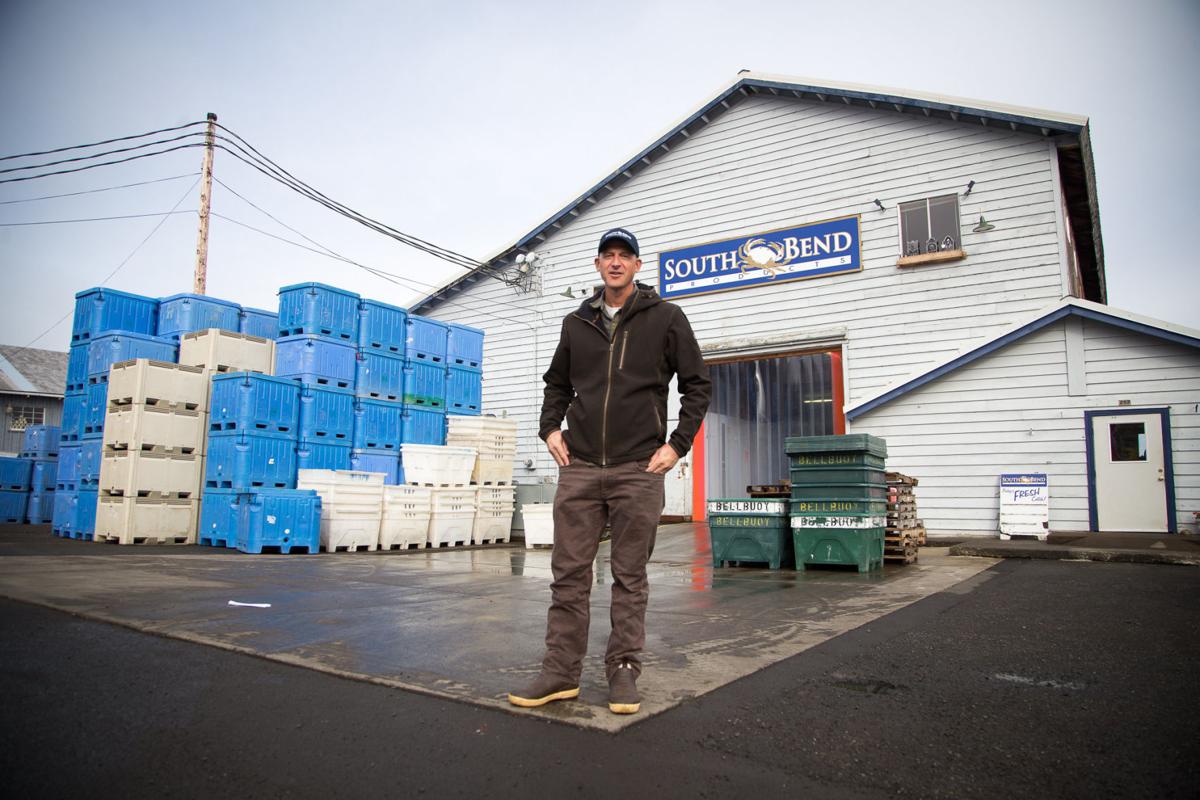 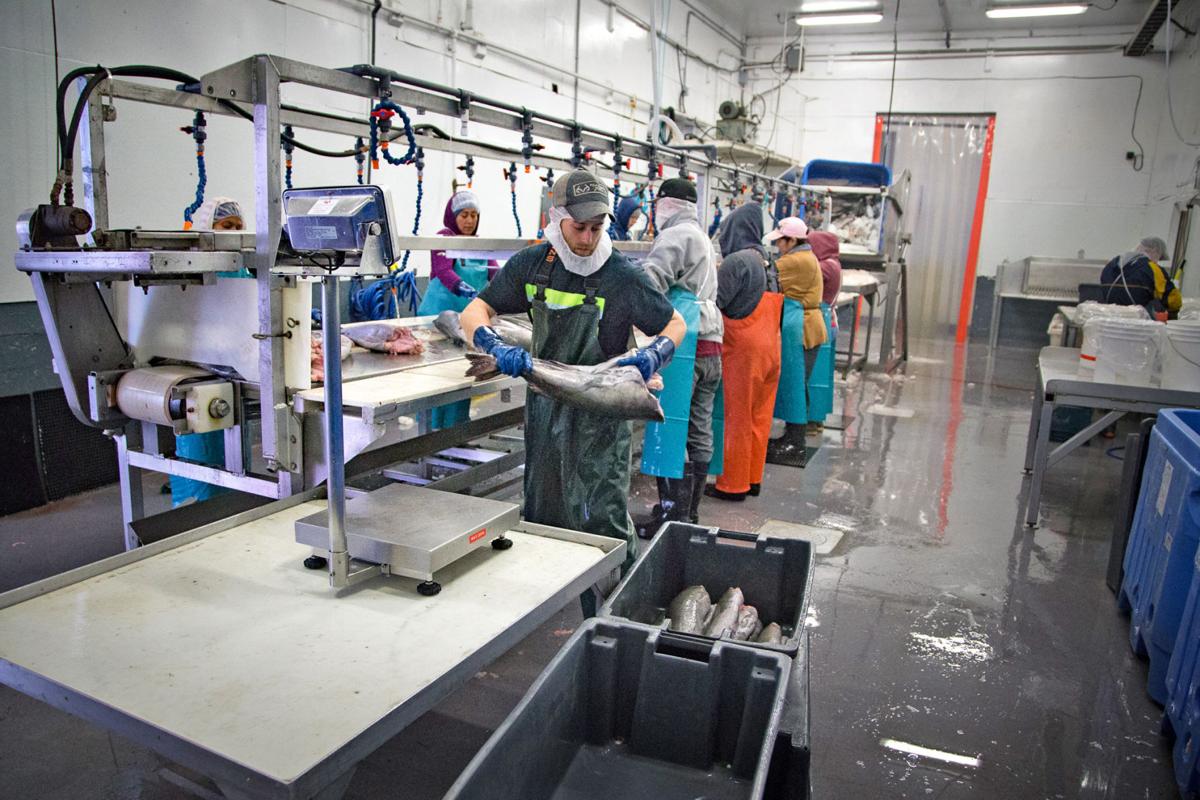 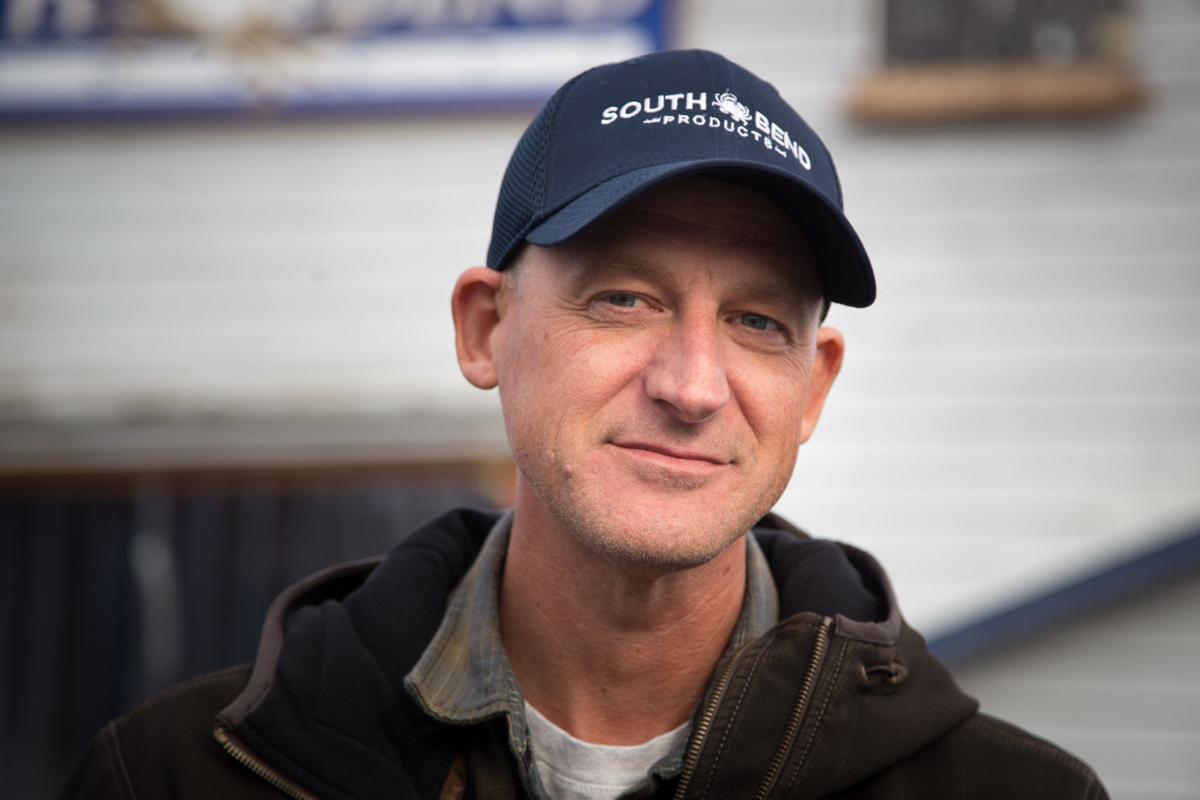 Dean Antich, 48, has concerns about the impact of 25 percent tariff imposed on US seafood imported into China. “It will have a impact on our chum salmon fishery specifically, traditionally a lot of that fish is sold into China,” Antich said. “It will likely have an impact on the Dungeness crab live fishery too.” 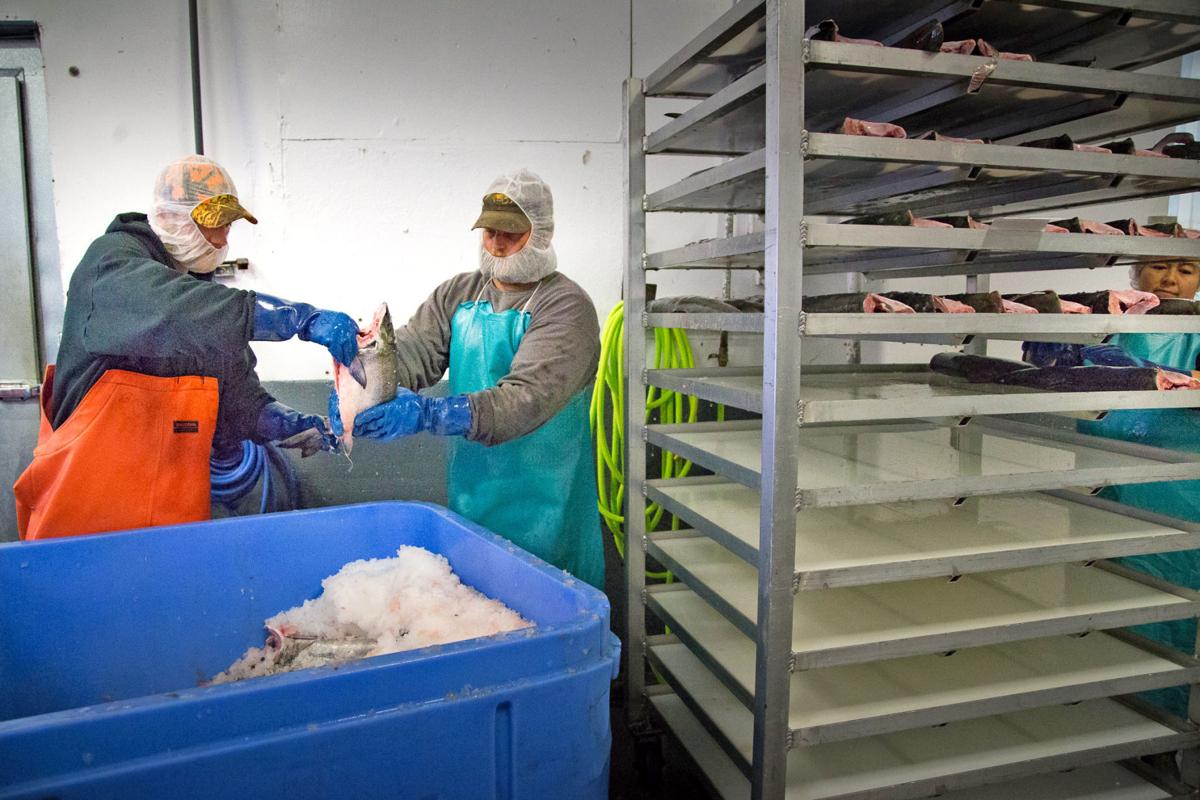 Workers processed chum salmon at the South Bend Products facility on Wednesday, Oct. 24. Antich is concerned about the potential impact of 25 percent tariff imposed by China on imported seafood, traditionally a big consumer of chum salmon and Dungeness crab.

Dean Antich, 48, has concerns about the impact of 25 percent tariff imposed on US seafood imported into China. “It will have a impact on our chum salmon fishery specifically, traditionally a lot of that fish is sold into China,” Antich said. “It will likely have an impact on the Dungeness crab live fishery too.”

Workers processed chum salmon at the South Bend Products facility on Wednesday, Oct. 24. Antich is concerned about the potential impact of 25 percent tariff imposed by China on imported seafood, traditionally a big consumer of chum salmon and Dungeness crab.

SOUTH BEND — Over the past decade, many Washington-based seafood processors have been gutted. Increased regulations, labor wages and shipping costs have eroded margins and stifled growth, particularly for smaller, family-owned operations. However, one business along the Willapa Harbor in South Bend has defied industry trends over its 10-year existence, continuously improving and expanding while diversifying its product line.

Dean Antich, 48, has been at the heart of the South Bend Products since the start overseeing the operation and two processing facilities approximately 45 miles apart.

“My responsibility for South Bend Products is to oversee the company in South Bend and Chinook,” he said.

“I’m responsible for the whole facility, regulatory regulations, inspections, human resources, fish procurement and processing, shipping, receiving — everything that occurs here.” Antich has worked for the Swanes family, owners of Northern Fish Products, since 1995. In 2008, Antich relocated from Olympia to oversee the processing facility in South Bend.

In 2015, Antich hired a sales manager, then added an assistant manager to help delegate the duties for the growing operation.

“I thought that would free my time up but we just got bigger and busier because now we can do more,” Antich said.

“It’s right along the Columbia River, where there’s more opportunity for more boats to come directly to the facility,” Antich said. “It’s a lower cost because there’s no trucking involved, the buying is done directly there whereas here (in South Bend) the fish is brought in from all over.”

Employees vary at each location depending on the season and the availability of fish. During peak production at the Chinook facility, up to 150 employees may be processing Dungeness crab, but right now it’s about 50.

“We pick a lot more crab in Chinook,” Antich said. “At a minimum five days a week.”

At the facility in South Bend, the crew can swell up to 100 employees, varying with the success of commercial fishing seasons. Summer is the busiest time with salmon.

“Right now we have about 55 employees,” Antich said. “We’ll probably have about 75 by the middle of next week. We’re learning how to best utilize both facilities.”

When catch stops coming in, processing grinds to a halt and staff is slashed. Antich hired fewer than 20 people for salmon processing this summer in South Bend, a result of a poor fishery. Typically, during a productive summer, as many as 60 employees are needed to handle fish processing seven days a week.

In spite of the restrictions and poor salmon runs, the business has been able to expand by bringing in fish from other areas, particularly Puget Sound.

“We’ve added lots of supply from outside areas,” Antich said. “Almost all of the fish we process is trucked in, very little is local. The growth has been adding opportunities where we know we can buy fish, sending buyers and ice and forming relationships. They grow every year.” Hundreds of commercial fishermen sell their catch at buying stations from the Columbia River to the north Washington coast.

“We have a buying station in Tokeland and Nahcotta, on the Willapa Bay,” Antich said. Chum caught by local gillnetters often arrive at the facility in the fall. The fish, more coveted for their roe than their fillets, account for a dwindling figure due to recent commercial-fishing restrictions on Willapa Bay.

“We’ve lost a tremendous amount of opportunity in Willapa Bay with the (salmon) policy. We’ve always had gillnetting in August. More restrictions on commercial harvests reduces the opportunity for fish,” Antich said. “When you have opportunities you have to take advantage of them because you never know when one fishery will collapse or fail.”

Diversification is crucial for seafood processors to remain viable as fisheries fluctuate.

“It’s important to be involved in different fisheries in different catch areas because they’re never all winners every year,” he said. “Some years some fisheries are flat or fail. We try to be diverse. That way, if something fails, it’s not catastrophic.”

Supply is largely a balance between consumer demand and what’s available.

“We’re handling a lot more black cod now,” Antich said. “We have opportunity and the fish is available to us. Salmon has been a disappointment all the way around this year.”

Each available season makes a difference, keeping the business in the black.

“Right now it’s lack of supply, the downturn in salmon and the increased operating costs, that’s the biggest challenge,” Antich said. “We were happy to have a commercial razor clam harvest this year. We haven’t had it since 2015 (because of domoic acid marine toxin levels). It exceeded my expectations. It wasn’t huge numbers but it was steady.”

Rising regulations, wages and shipping costs are some of the biggest burdens facing small businesses. The Food Safety Modernization Act (FSMA), signed into law in 2011, and Electronic Logging Mandate (ELM), enacted in 2017, though well-intended changes, have had unintended consequences. In 2016, Washington voters approved initiative 1433, requiring minimum wages to increase incrementally from $11 in 2017 to $13.50 by 2020.

“Business is getting expensive,” Antich said. “The cost of labor is going up. Government regulations are creating more cost throughout the food processing industry. It’s not unique to us — it’s the food industry in general. Transportation costs are up because of regulations on driving times.”

“It’s evolving with overseas tariffs,” Antich said. “It will have an impact on our call chum salmon fishery specifically. Traditionally, a lot of that fish is sold into China. It will likely have an impact on the Dungeness live crab fishery, too, but it still remains to be seen. China imports a lot of chum salmon. We sell frozen chum into China, a few containers.”

Higher prices resulting from the tariffs could shift Chinese consumers to buy from Russia or Norway.

“It could possibly displace that market or have an impact on the values,” Antich continued. “It can affect prices domestically and other parts of the world that are buying chum, because things can be rerouted. We have to see things play out.