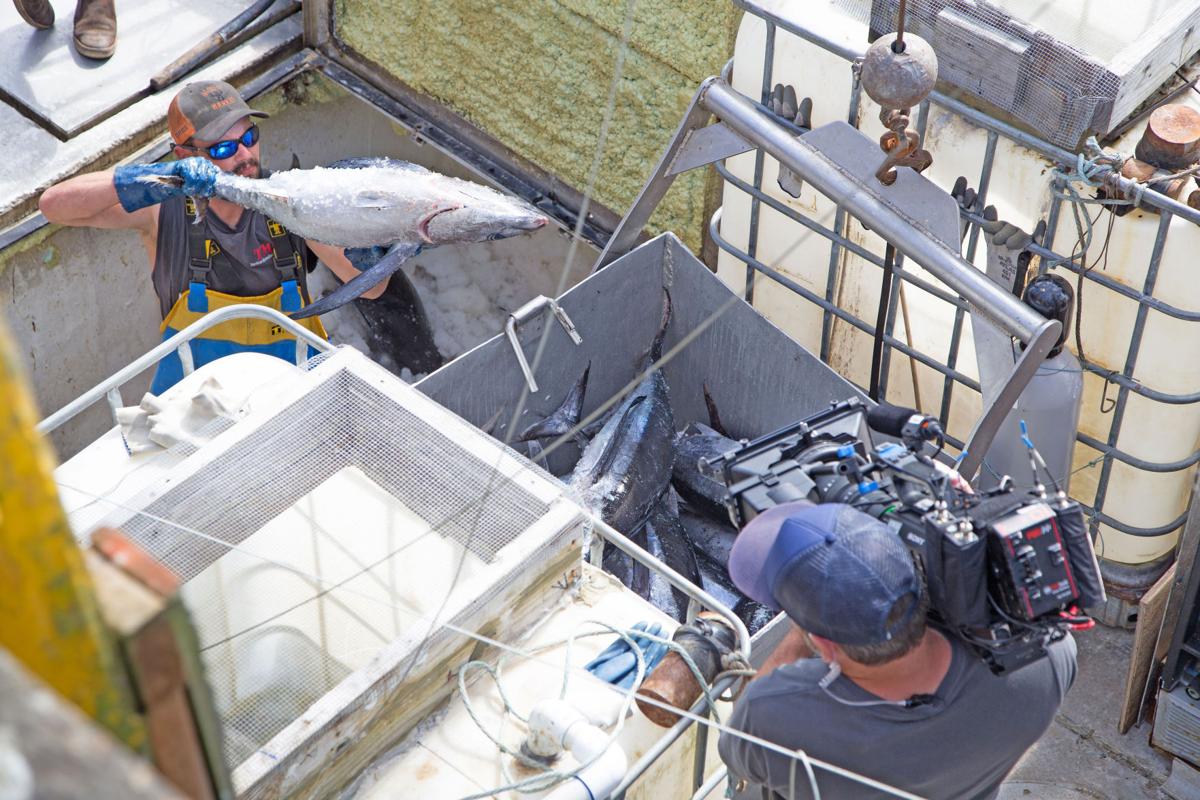 Commercial fishermen unload albacore tuna in front of film crews at the Port of Ilwaco on Friday, Aug. 18. The July and August catch, typically the strongest months, has been a fraction compared to last season. 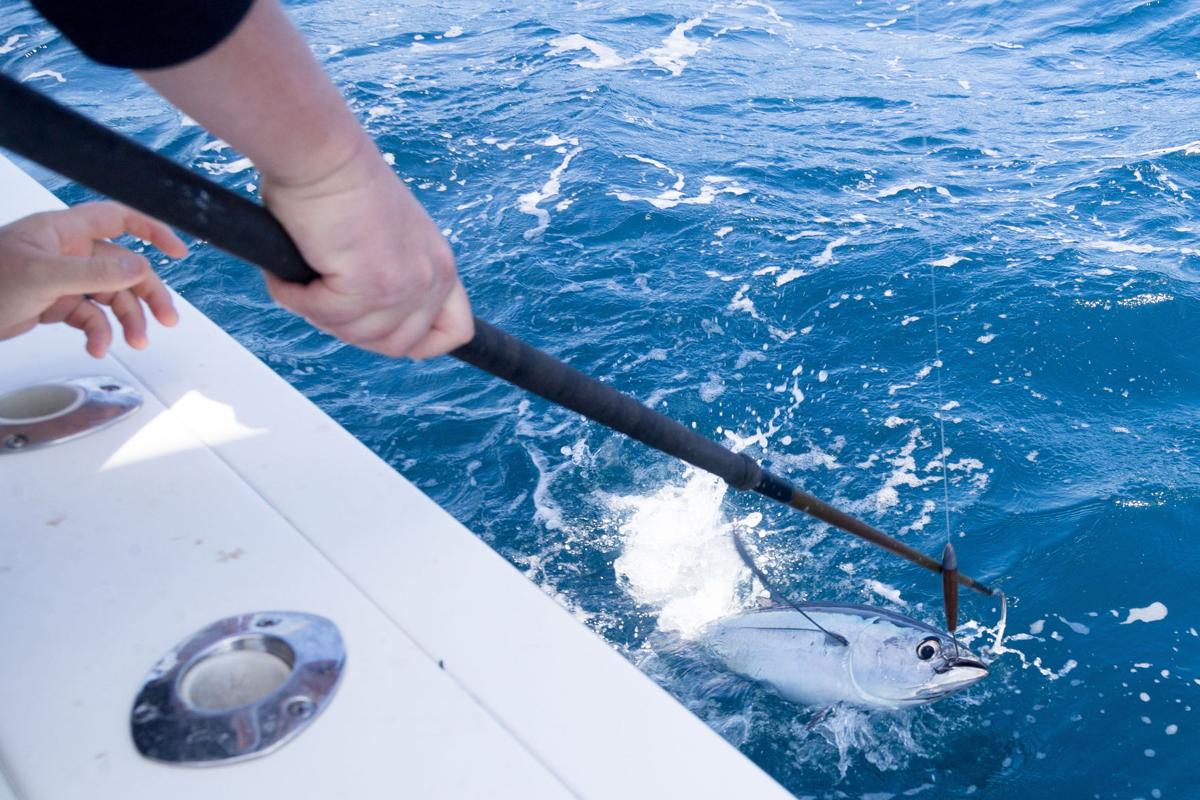 Fishermen are going farther and fishing longer in order to catch albacore tuna this season. Natural cycles may be to blame, or aftereffects from warm ocean conditions 2014 to 2016. 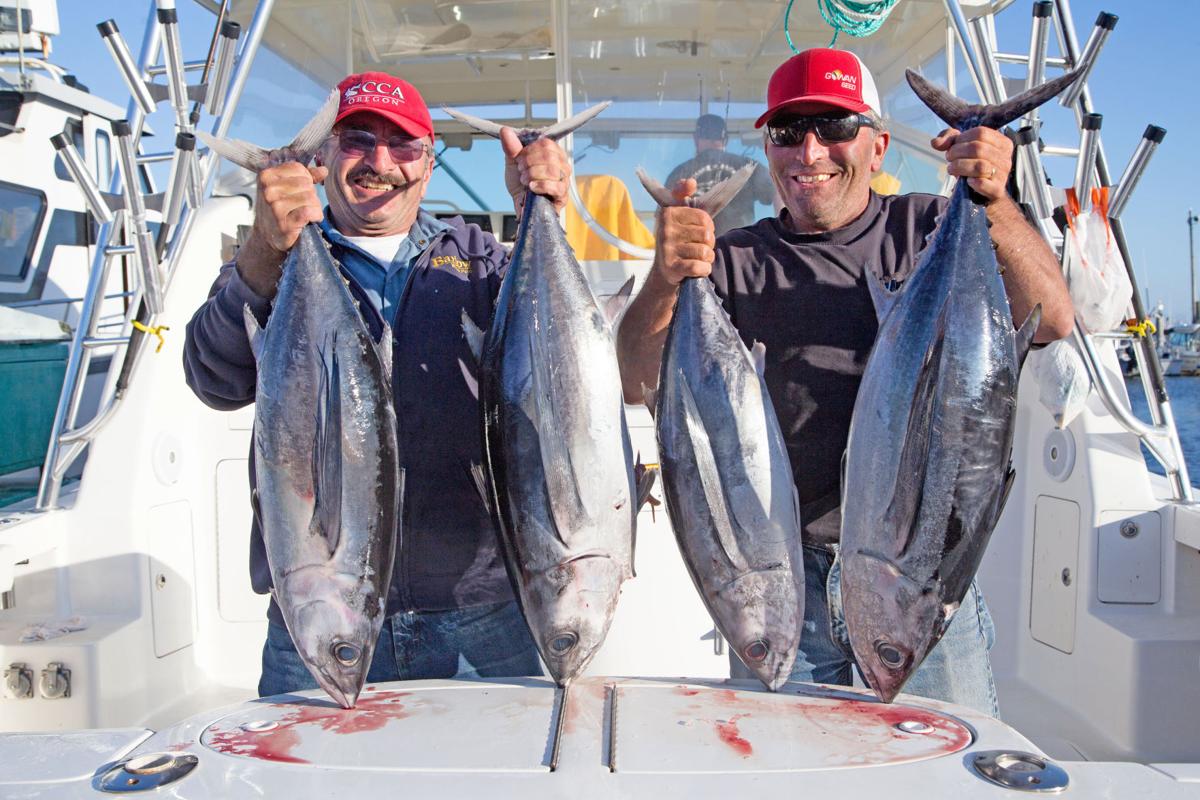 Joe and Howard Calcagno caught their first tuna during a fishing trip aboard the charter Shake N' Bake on Tueday, Aug. 15. Deckhand Clark Von Essen defined the season as “technical.”

Commercial fishermen unload albacore tuna in front of film crews at the Port of Ilwaco on Friday, Aug. 18. The July and August catch, typically the strongest months, has been a fraction compared to last season.

Fishermen are going farther and fishing longer in order to catch albacore tuna this season. Natural cycles may be to blame, or aftereffects from warm ocean conditions 2014 to 2016.

Joe and Howard Calcagno caught their first tuna during a fishing trip aboard the charter Shake N' Bake on Tueday, Aug. 15. Deckhand Clark Von Essen defined the season as “technical.”

WEST COAST — Ask any fishermen, processor, buyer and they will say the same thing: It’s been an abysmal season for albacore tuna. Commercial tuna fishermen are going out further and stay out longer. Recreational tuna charters have been warning customers of the spotty fishing and suggesting salmon trips instead.

In past years the albacore fishing came easier, when fish were nearer to shore schooled in numbers, but neither has been the case for the 2017 season.

While most fisherman seek different species depending on the season, there are those who fish exclusively for tuna who have been hit the hardest.

“The fishermen are bringing in very little or no income for their families,” said Oregon Albacore Commission executive director Nancy Fitzpatrick. The slow fishing has meant freezer boats are staying out longer to find the fish and fill their hold, sometimes as long as a few weeks beyond what’s typical.

“I just heard of some boats that were heading out for 40 or 45 days,” Fitzpatrick said. “They’re going a long way out to try and find the tuna.”

Trips 50 to 75 miles out are typical, but this year boats have had to go further to find fish, sometimes beyond 125 miles. The goal is to stay out fewer days to curb costs and bring in a fresher product. Each extra day of fishing increases fuel and crew costs, and lowers the quality of the catch.

“You want it to be efficient,” Fitzpatrick said. “The tuna guys are hunting, they’re looking for the tuna.”

The slow fishing doesn’t only impact big distributors, but also members of the fleet who sell directly off the dock to the public.

“If they don’t have it, the consumers who come down to the dock will have nothing and those fishermen won’t have money to pay their bills,” Fitzpatrick said.

Over the past 10 years, Fitzpatrick hasn’t seen a season quite like this one.

“Typically, July and August was our heaviest months for landings, but July was very slow which is unusual,” she said.

Western Fishboat Owners Association representative Wayne Heikkila, who has been monitoring the tuna fishing season coastwide from California to Washington, classified the season as “quite slow” but not unprecedented.

“We have had past years where fishing was spread out,” Heikkila wrote in an Aug. 23 email. Heikkila said boats are as far as 1,500 miles out, but aren’t finding concentrations of tuna.

“We are guessing that the ocean conditions are mixed up from two years of El Niño, La Niña and ‘The Blob,’ not a lot of upwelling and feed concentrated along the temperature edges,” he said. Heikkila doesn’t believe the issue is stock related.

Kevin Parlee, a fish procurer for Bornstein Seafood, has been witnessing the same scenario the past few weeks. Parlee, who buys fish from different vessels from Brookings up to Canada has seen how slow the season has been first hand.

“Last year the fish were early, so everyone expected them to be on time this year,” Parlee said. “But there’s no big schools or concentration from 1,800 miles offshore all way into the beach.”

Parlee said commercial fishermen are averaging “between 40 and 120 tuna a day,” but it hasn’t been consistent and ports to the north are having even more dire days.

“The more further north you go the less fish there are,” he said. “Places like Westport are reporting an 80 percent fall from last year.”

With the heaviest catch months already passed, Parlee doesn’t see how the season can be salvaged at this point.

“Even if the catch doubles, it won’t make up for the shortfall of fish. Hopefully, we have a good September and good half of October,” he said.

If there’s a silver lining in the tuna-fishing season, its been the size of the fish. While the tuna haven’t been caught in the numbers most are accustomed to, many of the fish coming to the docks are above average in size. Typically, albacore average around 15 to 20 pounds, but fish weighing 40-pounds-plus have been caught with more regularity this season.