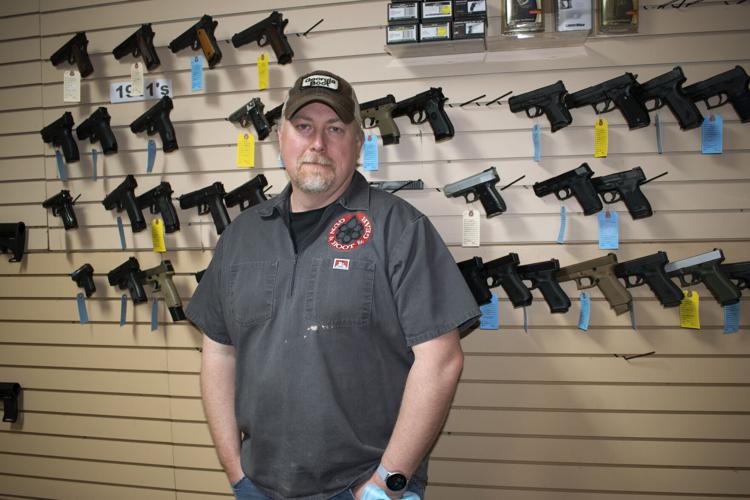 Neil Christensen is the owner of Gun & Boot & Gear and the manager of M&N Workwear in Astoria. 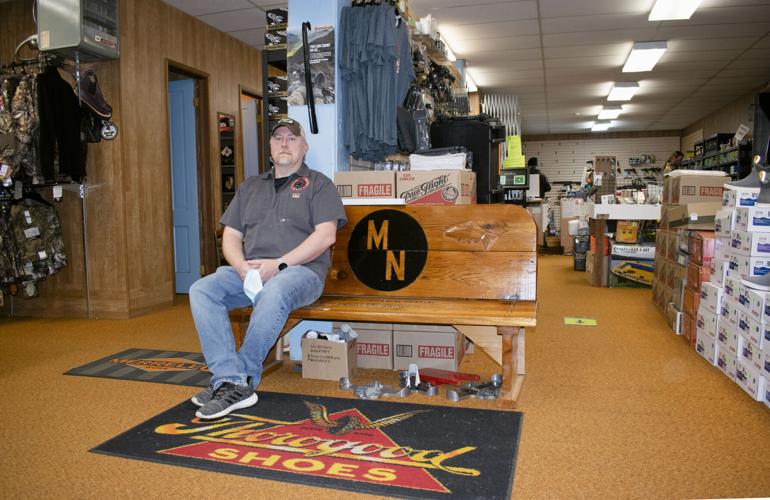 Neil Christensen has worked with his family at M&N Workwear since he was 6 years old. 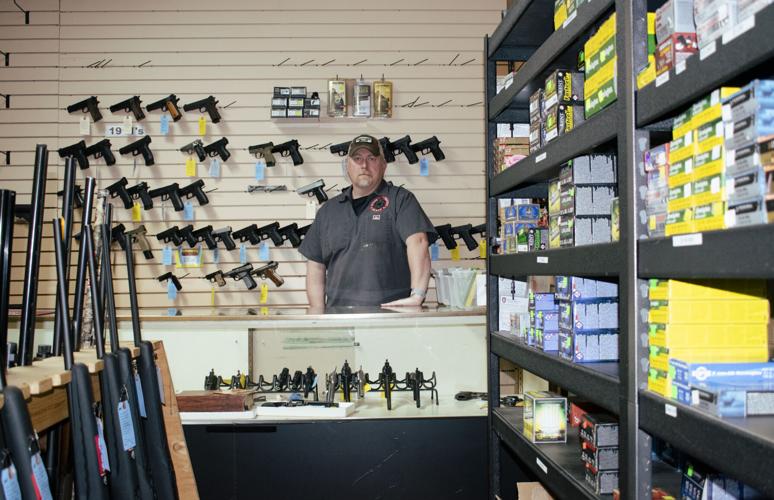 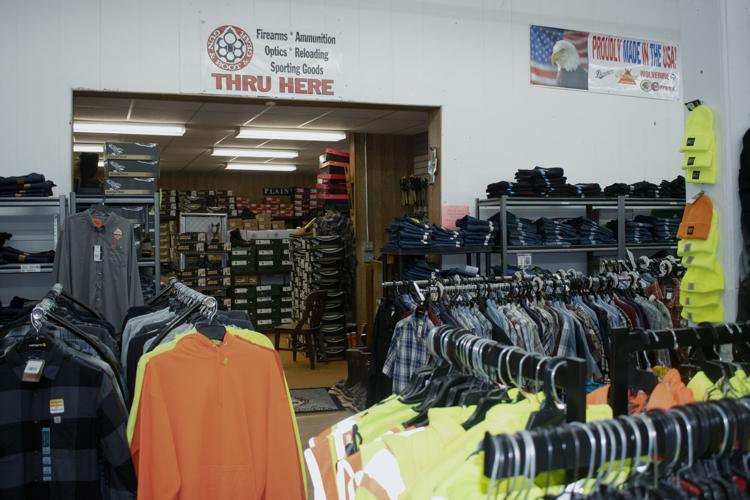 M&N Workwear and Gun & Boot & Gear are separate businesses located next to each other in an adjoining space. 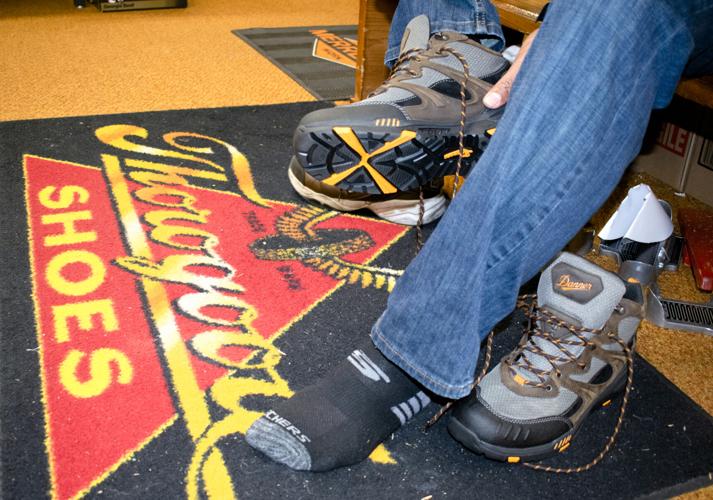 A customer tries on boots at Gun & Boot & Gear in November.

Neil Christensen is the owner of Gun & Boot & Gear and the manager of M&N Workwear in Astoria.

Neil Christensen has worked with his family at M&N Workwear since he was 6 years old.

M&N Workwear and Gun & Boot & Gear are separate businesses located next to each other in an adjoining space.

A customer tries on boots at Gun & Boot & Gear in November.

“I’m Neil Christensen, manager of M&N Workwear, which is a family business that started in 1931. I own a separate business, Gun & Boot & Gear. My family had two businesses and I bought the one and turned it into Gun & Boot & Gear.”

“The store opened in Clatskanie in 1931. In 1993, our family opened up the store in Astoria. My father is the second generation working in the store, I’m the third, and we have the fourth generation as well. And we have other employees we treat as family.”

Tell me about M&N Workwear.

“We’re a bit of a specialized clothing and footwear store, work and outdoor specific. We carry durable brands, like Carhartt and Wrangler. We’re focused on more blue collar supply. It seems like every 15 to 20 years styles change. It used to be Levi’s and rubber boots and now it’s Carhartt and Georgia Romeo boots. We listen to the customer and provide what they want. We try to do our best to supply what people need to keep going in the Northwest.”

“We found a lot of our customers were coming from Astoria and the coast. So we ended up closing the Clatskanie one and for the past few years we’ve just been running the Astoria one. We’re trying to find what the customer wants and provide that for them. Now it’s a hunting rifle and scope type store. We try to cater toward the avid hunter. I bought the store from my parents in 2014. That was in Clatskanie and we started in Astoria around 2016.”

What has demand been like during coronavirus and the election?

“Ammunition is really what went a little crazy in the country. Ammunition is manufactured at a fixed rate. Machines that make ammunition are running 24 hours a day already. Anytime there’s an increase in demand, there’s a lack of supply. Demand went up in March when COVID happened, maybe by double. They can’t keep up with double. Everything disappeared in the country. Now the issue is there isn’t enough.

“I’ve had people come down, a lady lost her home in a fire and had looters coming and she couldn’t find ammunition in Portland so she came to us. She was from Oregon City. We don’t have as big of demand here so when there are shortages we have stuff and people come in. I don’t think demand has increased locally but it has from outsiders coming in. With COVID, the fires and now the election is another nail in it. Some of the ammunition I haven’t been able to order since March. It’s kind of sad for the hunting season. I haven’t had the gun-that-won-the-west ammunition, the old .30-30 ammunition, that’s been made for 120 years.”

Have you had more people coming in recently for hunting season?

“We’re getting into elk season. We have some of the best elk hunting out here. And we’ve got the weather for it, it’s nice and rainy so it’s going to be a good season. There is an increase in demand right before hunting season, with all the people getting ready for it.”

"We try to do our best to supply what people need to keep going in the Northwest.”

What has it been like working in a family business?

“I started working when I was 6 years old. I worked in the store, I busted cardboard boxes, and shoes didn’t come laced in the late 70’s so I had to lace them and make sure they had little bows. I have an older brother who’s four years older than me. Both of us grew up in the store. Customers were patient with us. When we used to run around the racks they’d still come buy stuff. I spent four years in the service and that’s the only time I didn’t work in the store. My brother left to work for PGE and now works at a natural gas plant out of Clatskanie. My kids work here as well, one in clothing and one on the gun side. Now my daughter’s in the service and she might come back and work here. We come from a long line. That’s all we do, we serve in the service and sell work clothes, that’s about it.”

What is the history behind M&N Workwear?

“My grandpa started it. He came from Denmark in the early 1900’s and worked his way up from Modesto. He came in through Ellis Island, and he was a crosscut sawyer and then came into selling work clothes. He got his citizenship from joining the service in World War I.”

How has COVID-19 affected your business?

“It’s been a challenge to deal with everything that’s going on. We’re lucky we live in the place with the people we do because everybody extends themselves. We have such a tight knit community and everyone reaches out and helps each other out. It’s not easy for anyone to do anything right now. It’s neat to see everyone supporting each other. Clothing’s hard to get, most manufacturers are out right now. Everybody’s scrambling to get simple pants.

“You always learn from these things. In the 2008 recession we learned. There’s always a reason why it’s happening. I used to think when business was up it was because I was a better business person, but it was because it was raining or it was payday. I’ll have a bad week and I’ll go talk to friends at the lumber mill, and they’ll be having a hard time as well. Learning the reasons why business is up or down is helpful because you realize it’s not just internal, there are external factors too.”

“It’s a crazy way to make a living. I always think, ‘What if my dad had a Ferrari dealership or my grandpa decided to do something else?’ But I guess it was work clothes for me. That’s why the chamber of commerce and the paper are like life preservers for us so we know the trends that are going on, and we know it’s not just us.”