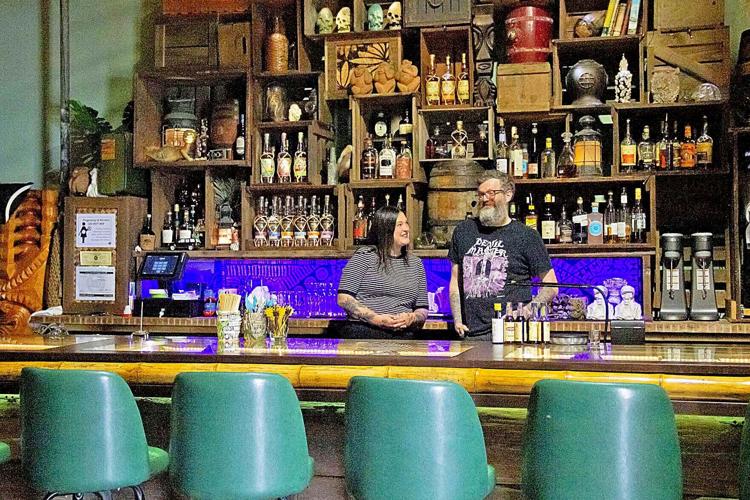 Annie Van Dyke and Miles Nielsen behind the bar at Dead Man's Isle on Duane Street in Astoria. 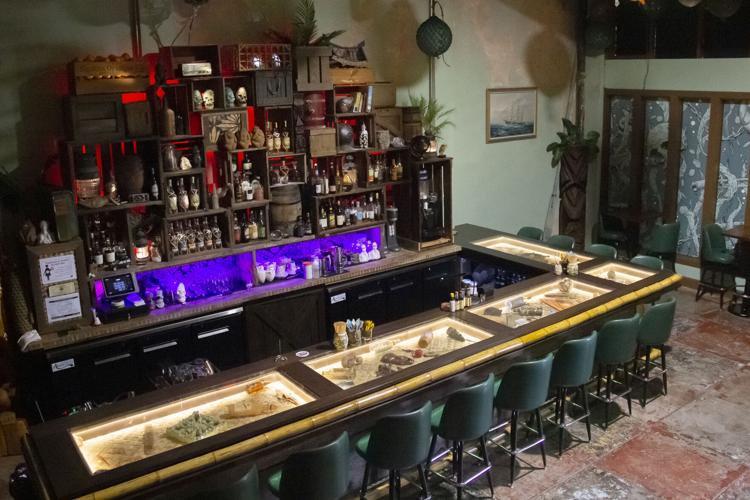 At Dead Man’s Isle in Astoria, the click of a button can cause a thunderstorm, complete with flickering lights and the sound of rain.

Annie Van Dyke and Miles Nielsen behind the bar at Dead Man's Isle on Duane Street in Astoria.

At Dead Man’s Isle in Astoria, the click of a button can cause a thunderstorm, complete with flickering lights and the sound of rain.

With the click of a button, the multicolored lights behind the bar at Dead Man’s Isle flicker and glow, with the sound of a rainstorm surging over speakers on the walls.

But for owners Annie Van Dyke and Miles Nielsen, the real storm has finally passed. After several years of preparation and unexpected delays, they’ve opened the doors to their Astoria business.

The couple first started planning the tropical and nautical themed bar in 2016 and, after securing a loan, were prepared to open in early 2020. Then, the coronavirus pandemic hit.

Because Nielsen’s parents owned the building, the couple decided to take their time to reassess and wait for a better moment to open.

“We were very fortunate,” Van Dyke said. “Otherwise, it wouldn’t have probably worked out as smooth as it did.”

Originally, the couple had planned on a tiny bar nestled within a gallery and retail space for Nielsen’s ceramic business, Munktiki, which has a gallery next door and a studio downstairs.

But, as time went on, their ideas for the bar grew to fill nearly all 10,000 square feet of the space. They wanted to incorporate aspects of Tiki bars, the Munktiki brand and an Astoria-inspired shipwreck theme.

“We’ve kind of been a part of this whole Tiki scene for a couple decades now,” Van Dyke said. “It was kind of just a natural progression from being the distributor of these custom ceramic drinking vessels to opening a bar that we can then showcase what we do for a living.”

Though the word Tiki originates in the Maori language and means a small carved figure, Tiki bars are a part of a unique American cultural phenomenon combining Polynesian and midcentury American aesthetics.

The bar was named after Dead Man’s Cove at Cape Disappointment to lean into local maritime history.

“The heyday of Tiki was in the ‘50s and ‘60s,” Nielsen said. “And that was personally my goal of this space was to keep it vintage looking.”

Vintage aspects include reclaimed wood features and vintage glass floats hanging from the ceiling that the couple has collected over the years. Behind the bar, a stack of wooden crates lit from within hosts the liquor options.

They plan to open a small additional bar in the upstairs area serving Japanese food and cocktails, which will be decorated with Nielsen’s Japanese vinyl toy collection.

Van Dyke said they’re grateful for the staff, who have had to learn the complicated tropical drinks Tiki bars are best known for, like Jungle Birds, pina coladas and mai tais.

The bar, open Thursday through Sunday, has been busy since opening night.

“So far, I just cannot believe, honestly, the support from this community is just incredible. And then with the people that work here, I mean, we hit the jackpot,” she said.