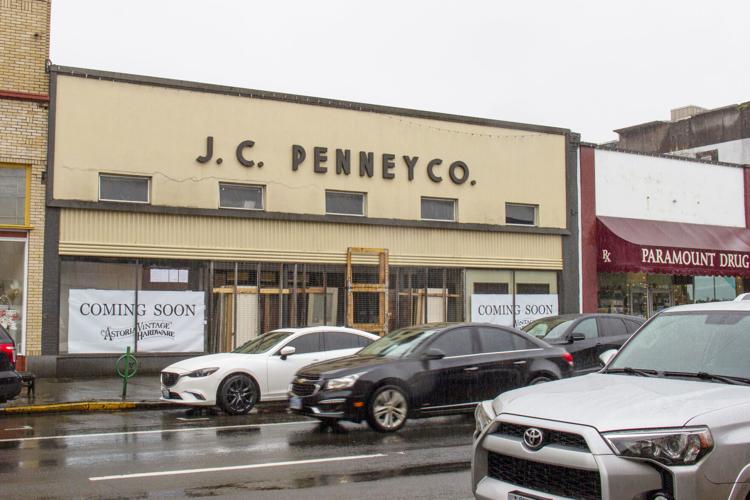 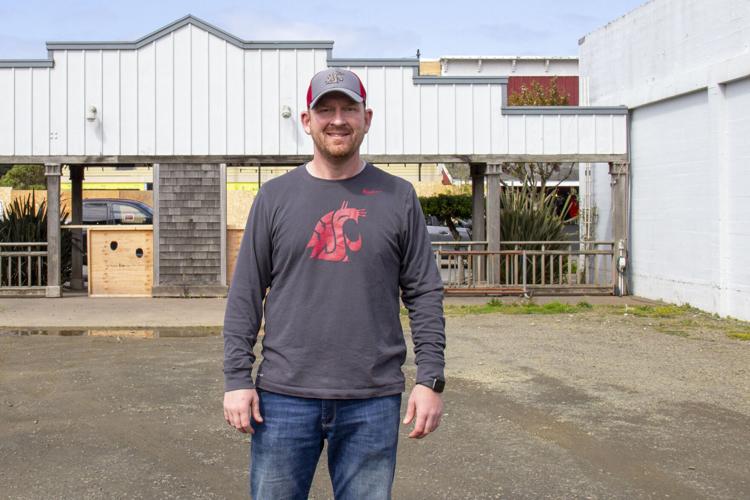 Tim Harrell plans to install four food carts in the lot next to Funland Family Fun Center in Long Beach. 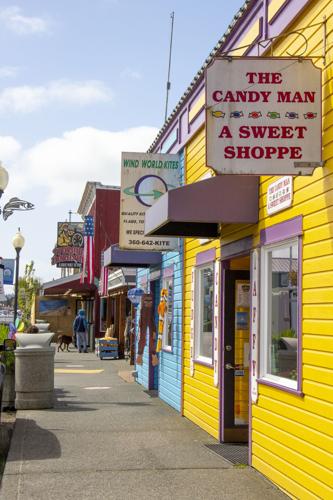 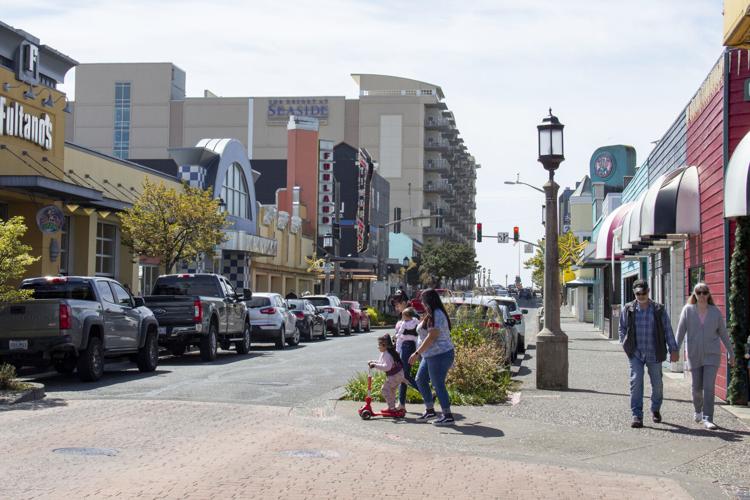 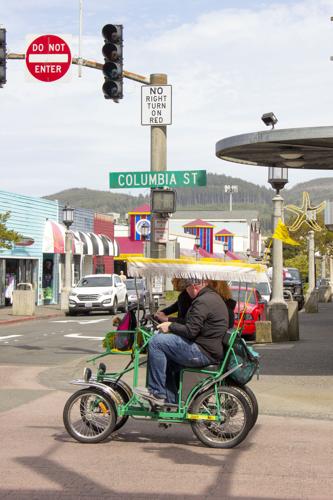 A rented pedal cart waits at a light in downtown Seaside. 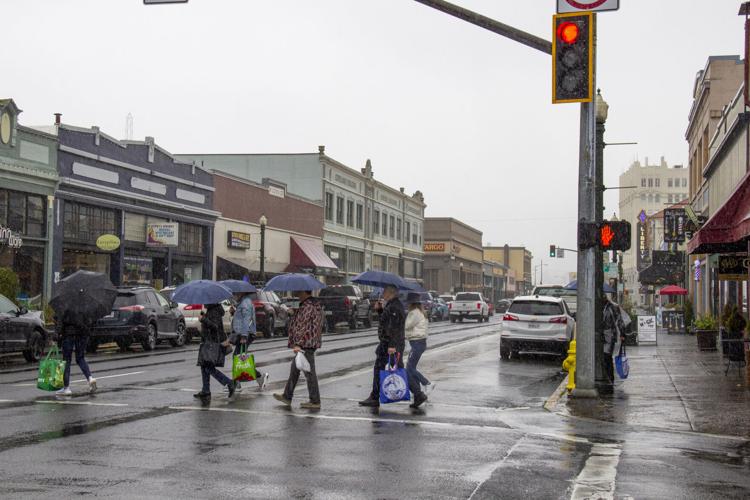 A rainy day in downtown Astoria.

While no two downtowns on the North Coast are alike, they each face some of the same issues: expanding while juggling historic aesthetics, highlighting the location and the needs of businesses, tourists and residents.

Many are also having to confront quality of life concerns stemming from an increased presence of homeless people.

The pandemic also brought more tourists to downtowns on the North Coast, highlighting these challenges and providing opportunities for new development.

‘Creating a space and an opportunity’

In Long Beach, the pandemic changed the way people visit.

“It used to be a ghost town in October through April. And now it’s not that way anymore,” City Planner Ariel Smith said.

Many of the visitors were from Oregon and Washington state, choosing a vacation spot closer to home.

The influx of visitors led the city to reexamine its tourism infrastructure.

“That’s one thing that we struggle with a lot here. We draw a lot of visitors — that’s basically what Long Beach is known for is tourism — and we don’t necessarily always have places for them to sleep and eat,” Smith said. “So having more opportunities for micro businesses and for others to come in and provide variety and things of that nature is something that’s been talked a lot about recently, and through the pandemic.”

The past few years haven’t brought drastic physical changes to downtown so far, Smith said. Updates include a new market opening on Bolstad Avenue and several businesses have painted and resided their storefronts.

Plans for the coming year hope to bring more transformation and opportunity.

“We really care about our full-time residents and our second homeowners. We want to make sure that they’re happy and taken care of year-round, provided with working infrastructure and upgrades to the entire city,” Smith said. “But with that tourism, the tax dollars also give us the ability to pay for some of those upgrades that are enjoyed all year round by the visitors. So there’s definitely a balance to be had.”

Last month, the city approved plans for a food cart hub in the heart of downtown, which plans to open in time for this summer’s rush of visitors.

“It was more about creating a space and an opportunity, and adding more options than anything else,” Harrell said. He added that he thinks the downtown location next to Veteran’s Field will be ideal during summer events.

The city has granted Harrell a special use permit for up to four food trucks, along with seating and utility requirements for water and sewer lines.

Harrell said that downtown businesses with reduced hours and limited staffing struggle to feed tourists. With the food carts, he hopes to provide more options.

“The biggest thing that we’ve talked about is: we’re not here to take away from what’s already established in this town,” Harrell said. “We’re really vetting the options and we’re not going to put something in that’s going to compete with the other stuff that’s already around town.”

Lack of housing for workers

On a weekday in early May, tourists zipped through downtown Seaside on rented scooters and pedal cars while others dipped into open storefronts. Like other cities on the North Coast, the pandemic has made Seaside busier than ever.

“We no longer have hills and valleys for tourists visiting. It’s a straight shot up, and keep going,” said Laurie Mespelt, the former executive director of the Seaside Downtown Development Association. “And yes, it’s wonderful. It’s awesome. That’s what the town is all about. But at the same time, the businesses have not had that (before). They’re used to staffing and having a little relaxed time and then hitting the ground again, hard, and running for the summer.”

With business booming, Mespelt said that she saw more owners pivot to adjust to the pandemic rather than close. Some businesses passed ownership between family members, and some have expanded.

Kerri Lambert, who recently became the downtown association’s executive director, said that business has grown slightly since the pandemic, but there haven’t been many visible changes downtown beyond some minor renovations.

She said she looks forward to bringing back popular downtown events, such as May’s wine walk.

“Seaside is just kind of trying to get back to where they were,” Lambert said. “Just kind of rebuilding, growing, just making sure that everyone is really open for business.”

The biggest hindrance to that growth, she said, is finding housing for staff and applicants hoping to move from other cities.

‘Growth means a lot of different things to different people’

Downtown Astoria also made steps to expand during the pandemic.

“We honestly, surprisingly, had a record number of businesses open during the pandemic, which I thought was really interesting,” said Jessamyn Grace West, executive director of the Astoria Downtown Historic District Association.

The pandemic also brought changes to the street, after the city permitted a few businesses to add parklets to expand outdoor seating.

With expansion, Astoria joins other North Coast downtowns in seeking a balance between locals and visitors.

“Downtown growth means a lot of different things to different people,” West said. “But I do think that we can all agree that supporting visitors and supporting year-round residents is key to a healthy downtown and to downtown businesses.”

In the coming months, Astoria will see the opening of the Astoria Nordic Heritage Park at the edge of downtown next to the Columbia River Maritime Museum. The Astoria Food Hub is assembling local merchants. The historic J.C. Penney building will also get a new facade after Vintage Hardware, an antiques stores, moves in.

“I think maintaining the character of the town is a really good guiding principle that we all kind of seem to have, even if it’s not written down somewhere,” she said. “Keeping the Main Street design focus and status, and walkability, is critical.”