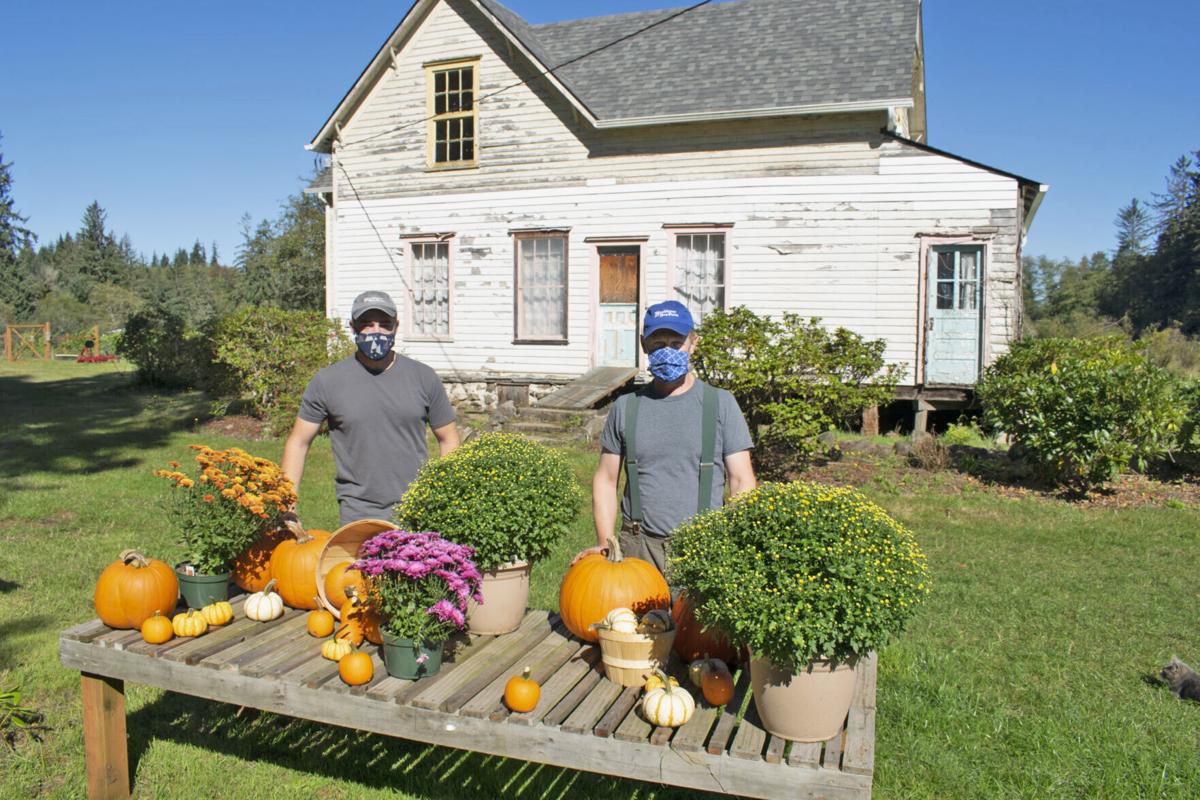 Andrew Thompson, left, and Scott Thompson pose for a photo at their farm. 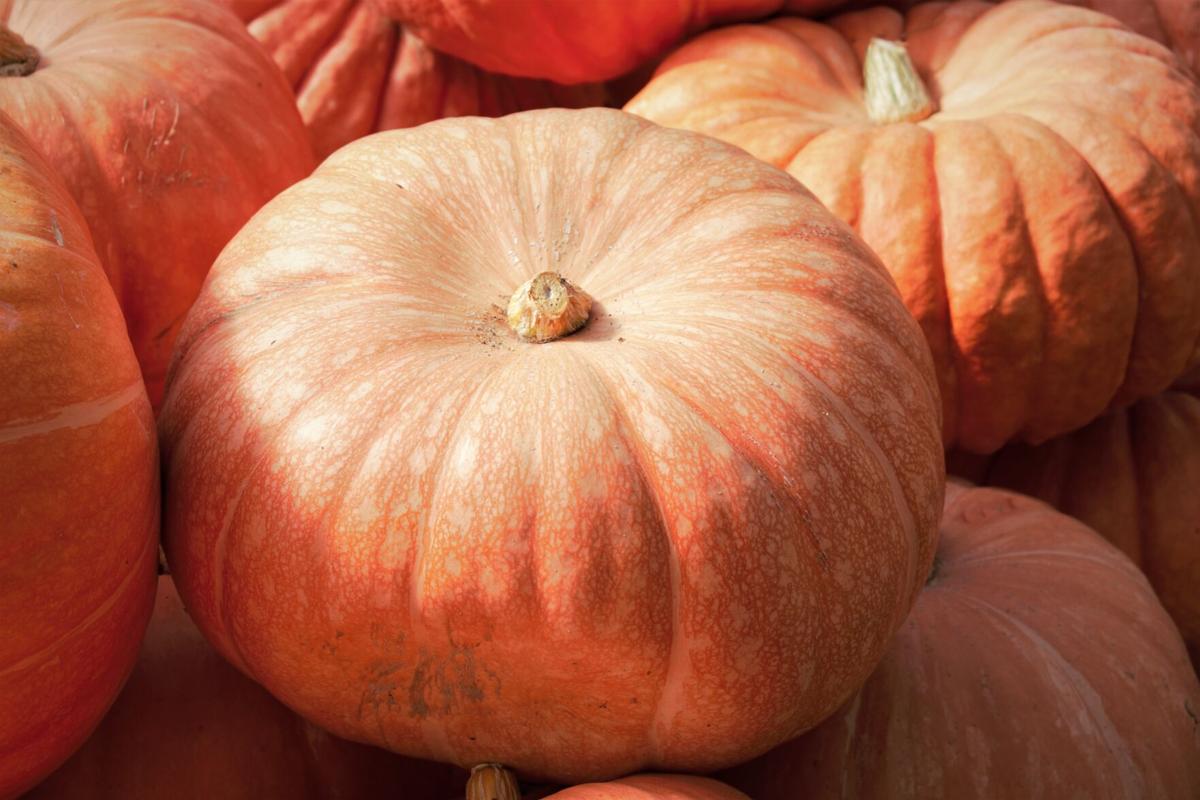 Blackberry Bog Farm is open from 10 a.m. to 5 p.m. Saturdays and Sundays throughout October for visitors to walk through the "pumpkin path." 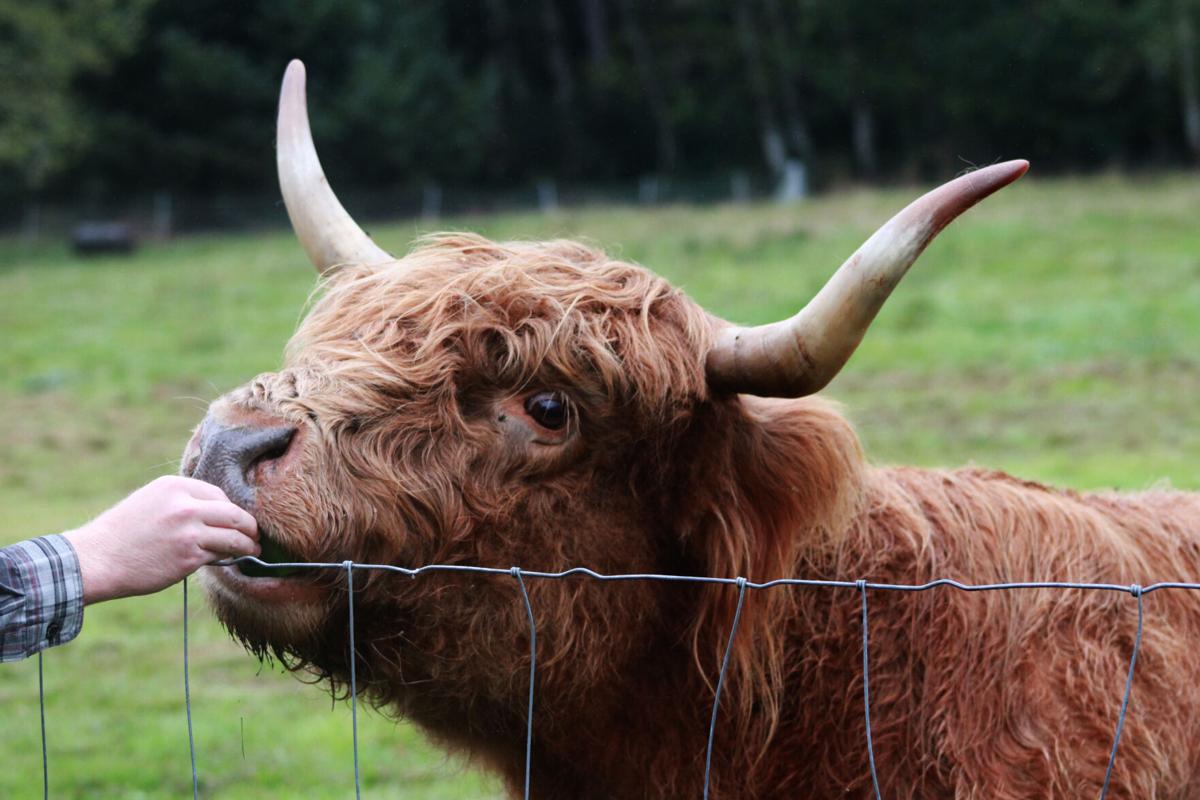 Andrew Thompson feeds a piece of zucchini to a Highland cow. 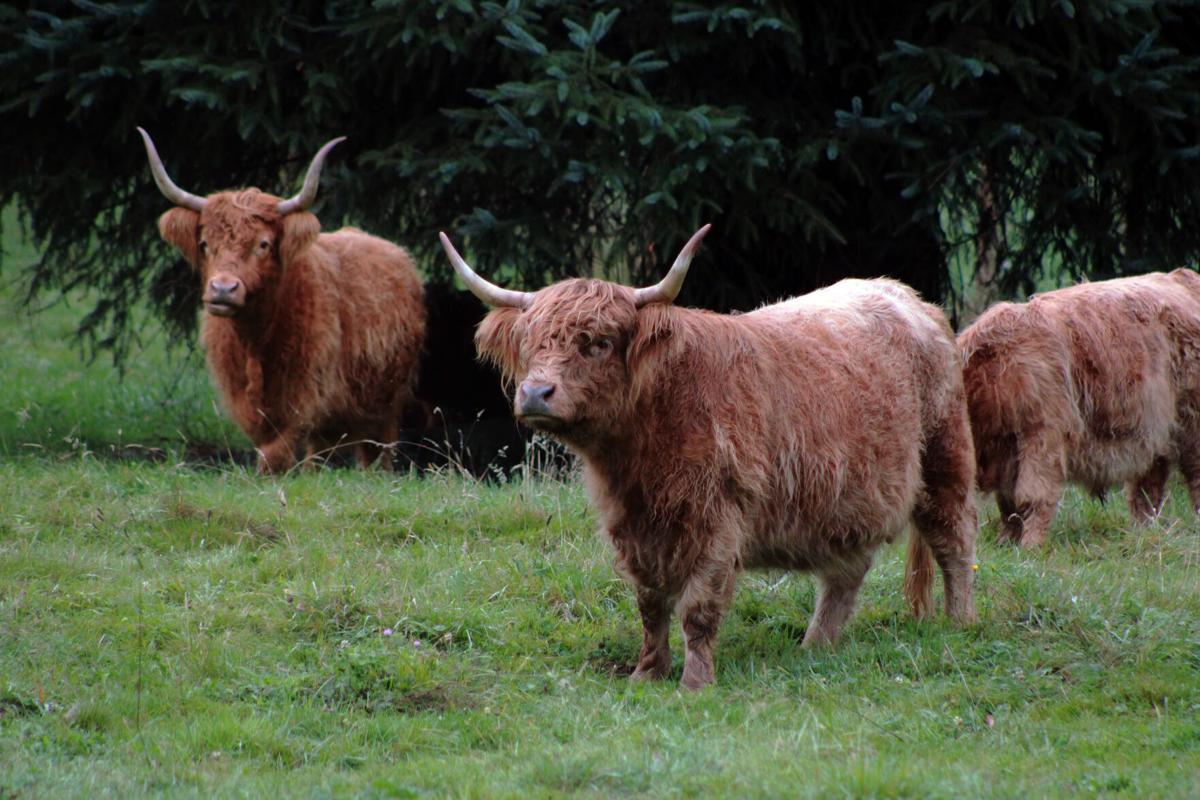 The Highland cows at Blackberry Bog Farm perk up when they see Andrew Thompson bringing them a snack. 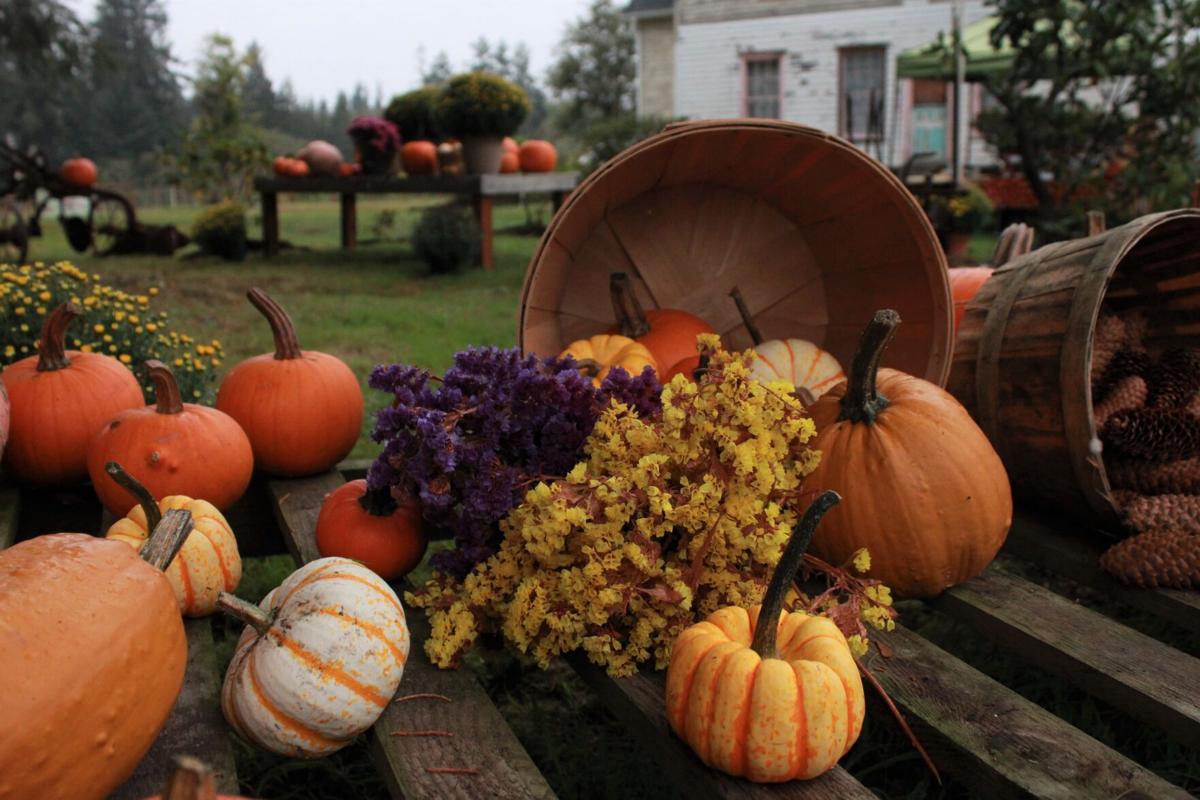 The pumpkin path features displays of pumpkins and mums. 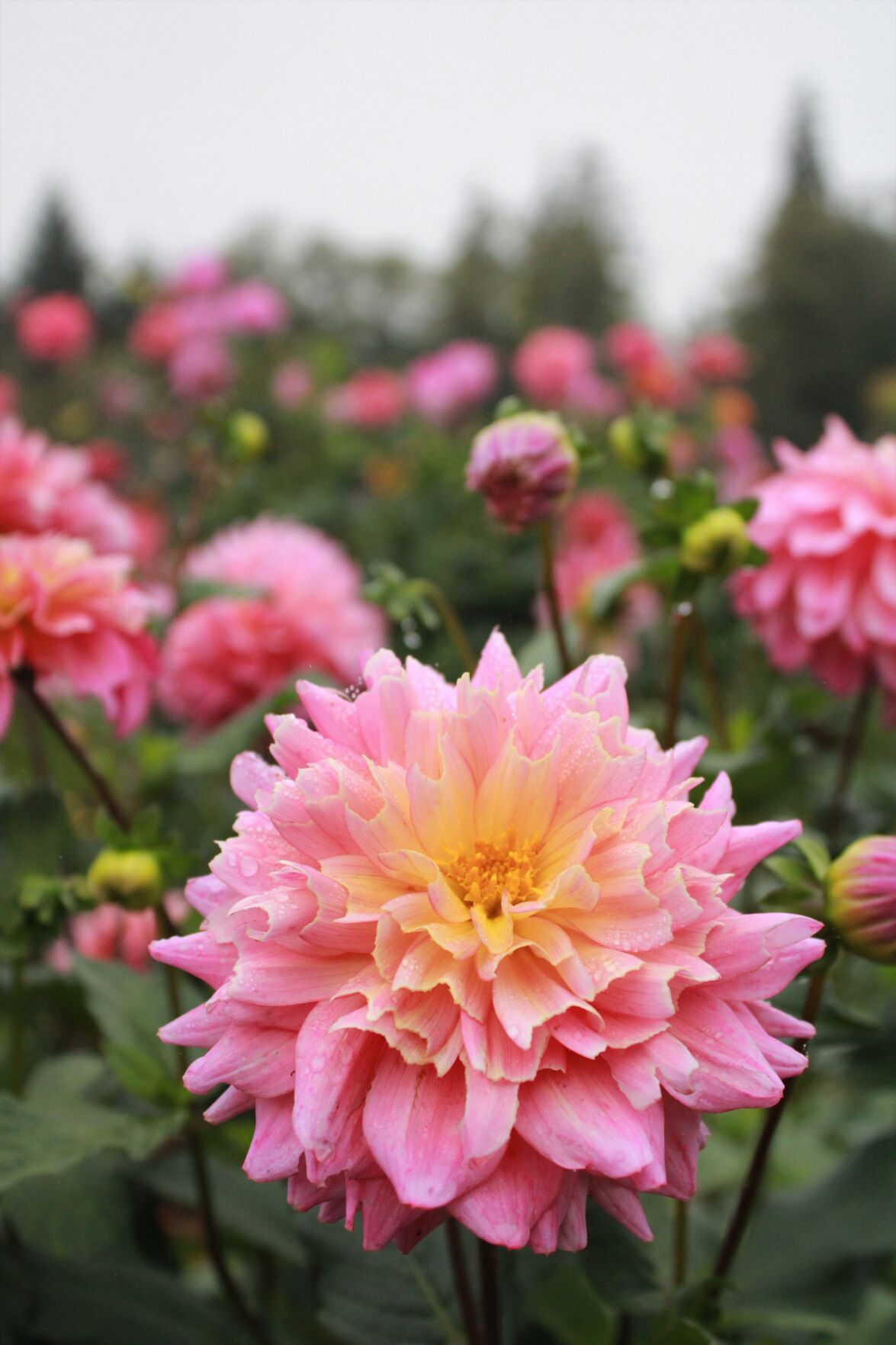 Blackberry Bog Farm's dahlias are in full bloom this month. 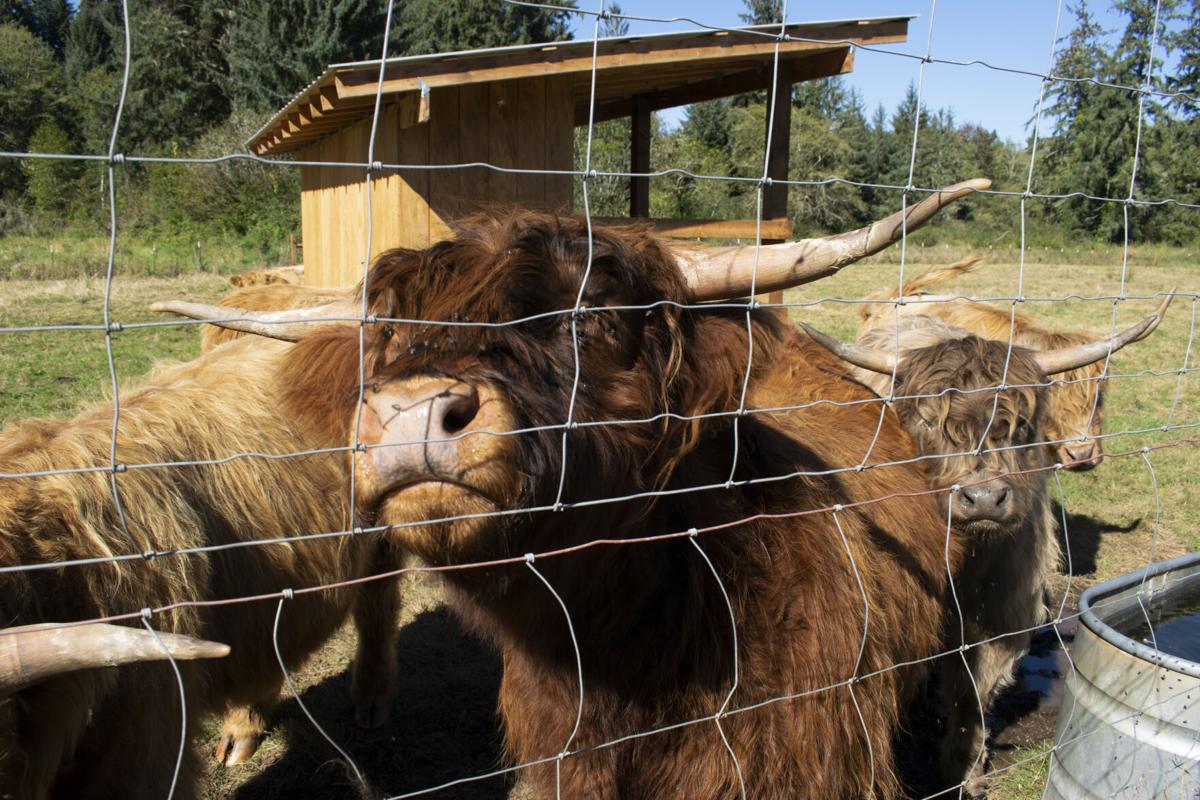 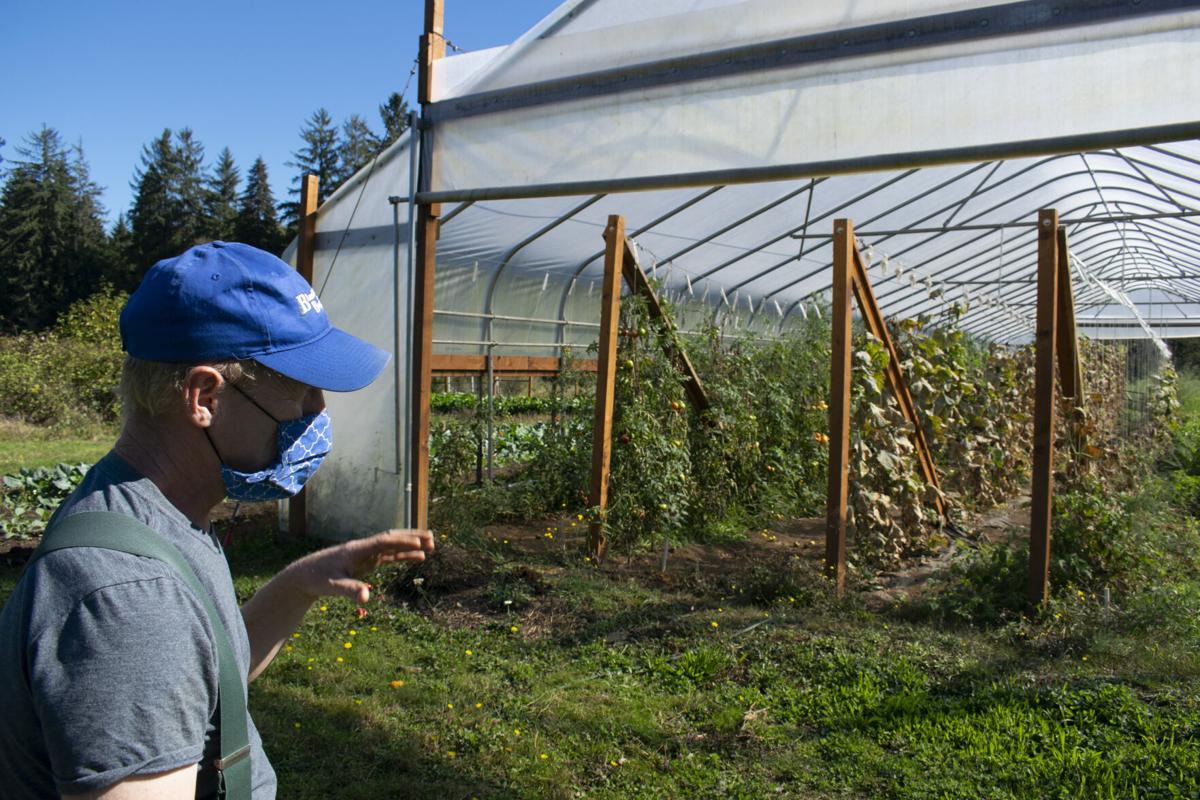 Scott Thompson gives a tour at his Svensen farm. 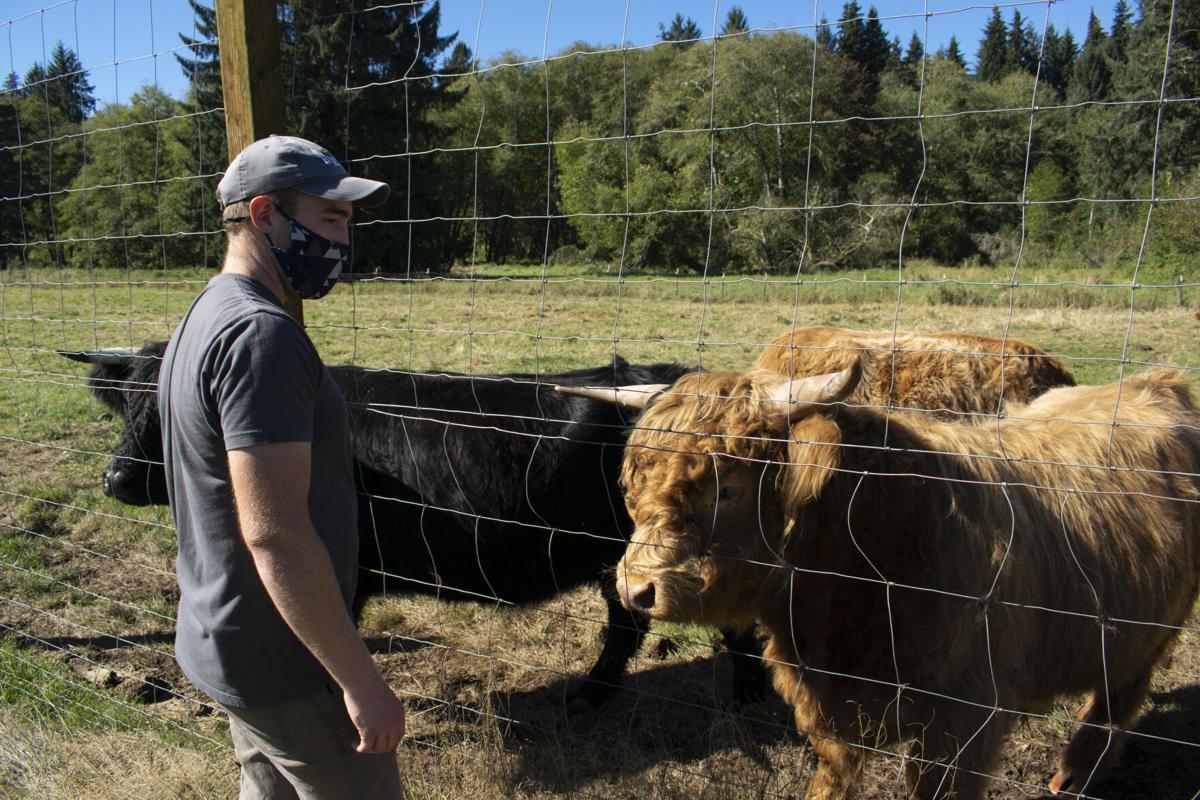 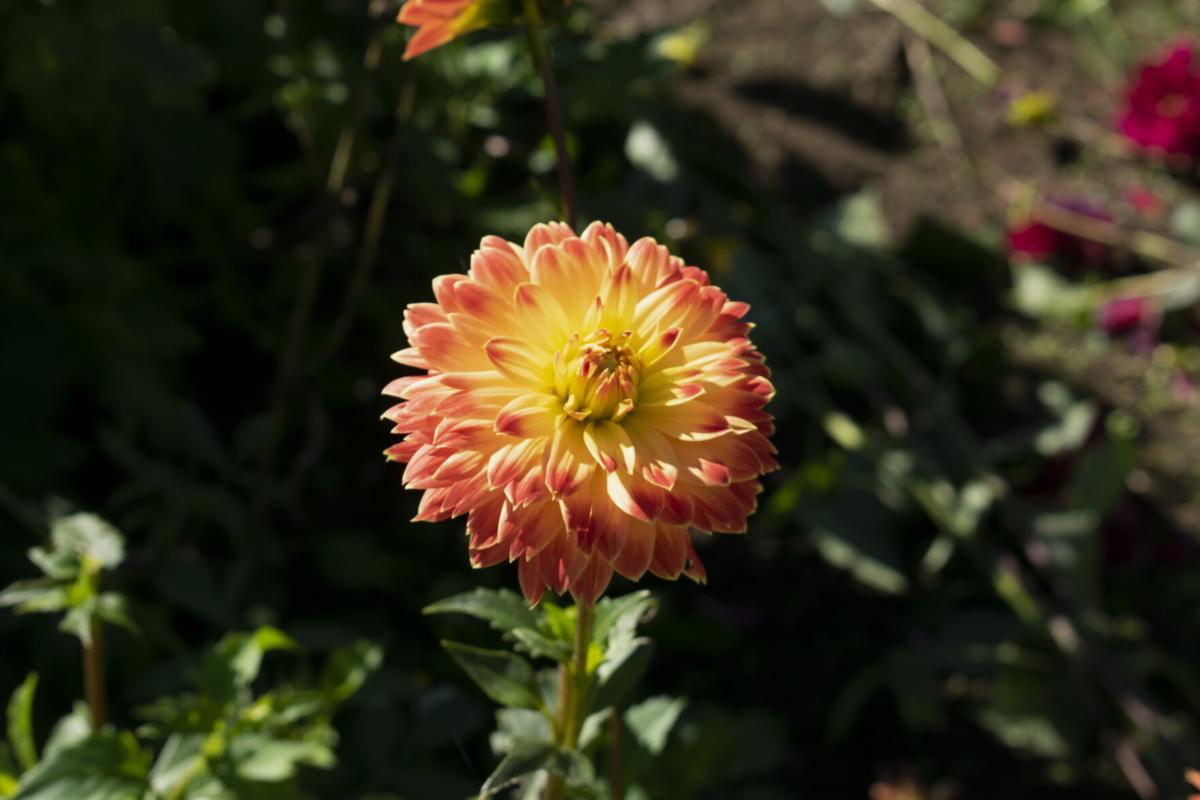 Blackberry Bog Farm has a garden of dahlias. 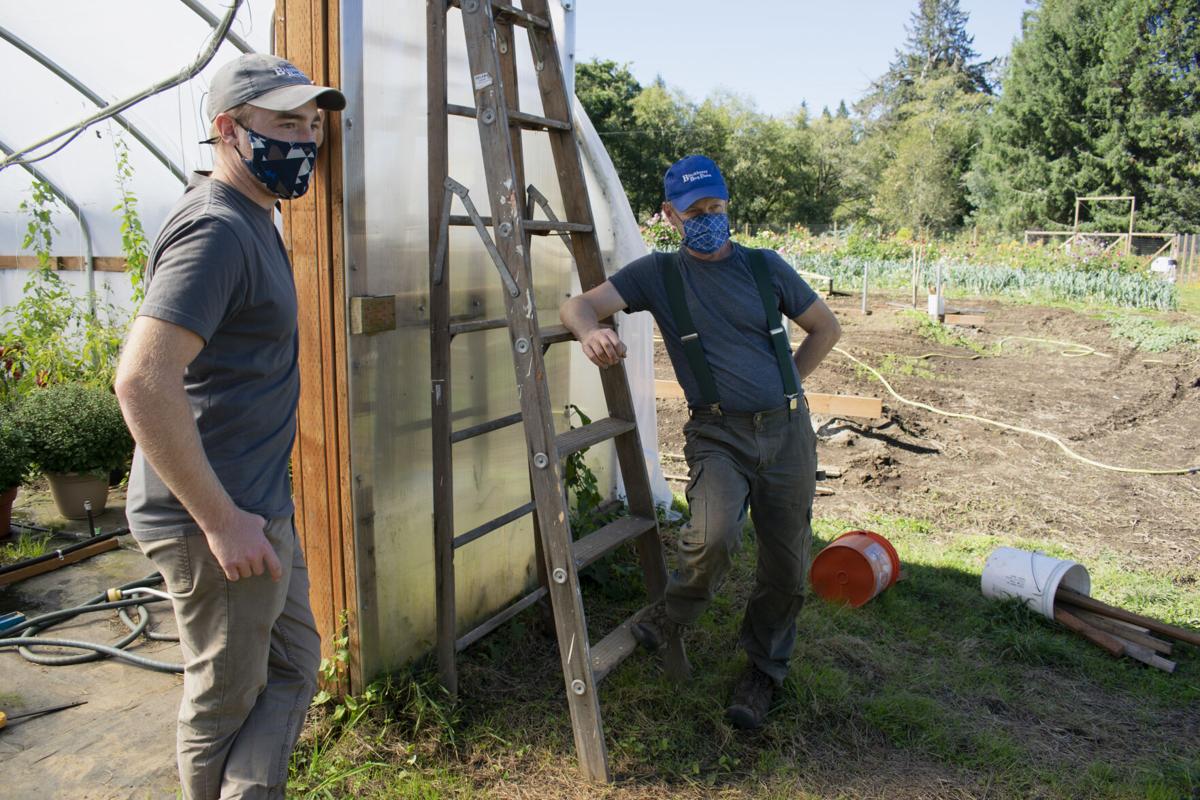 Andrew Thompson, left, and his father, Scott Thompson, at their farm in late September. 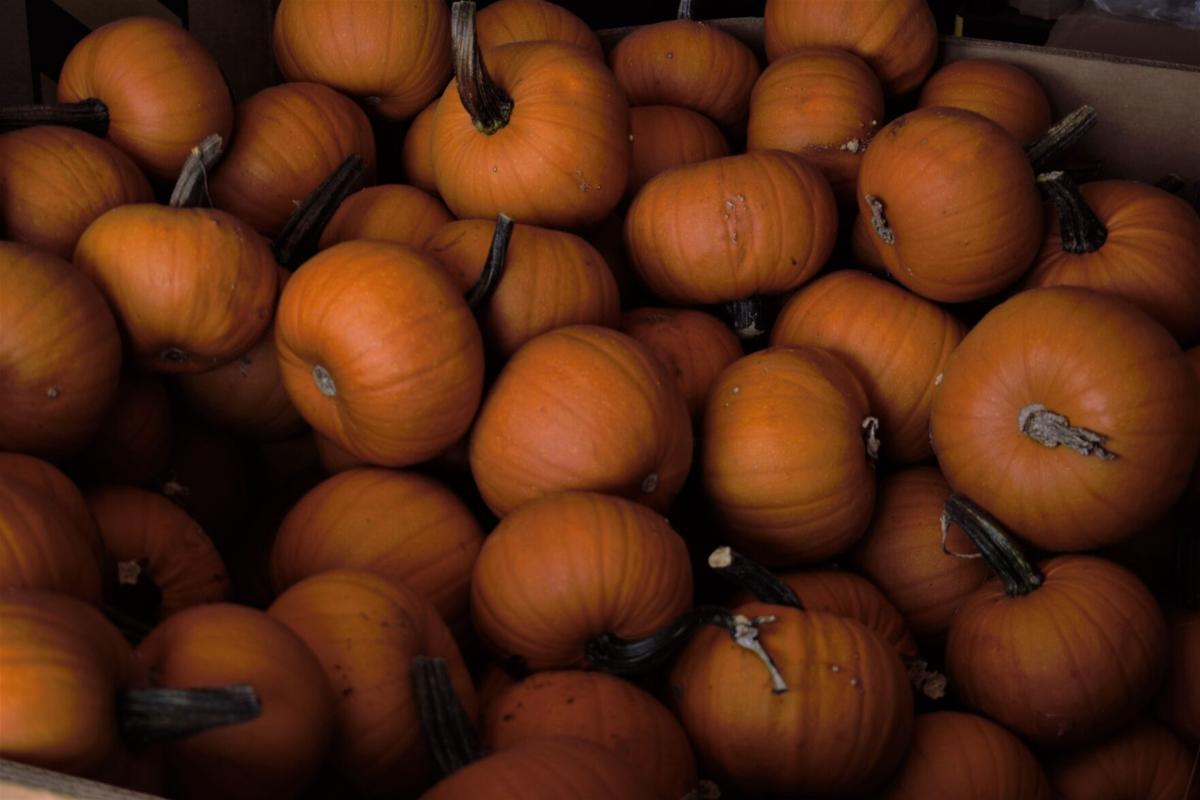 Blackberry Bog Farm in Svensen sells a variety of produce and plants, including pumpkins. 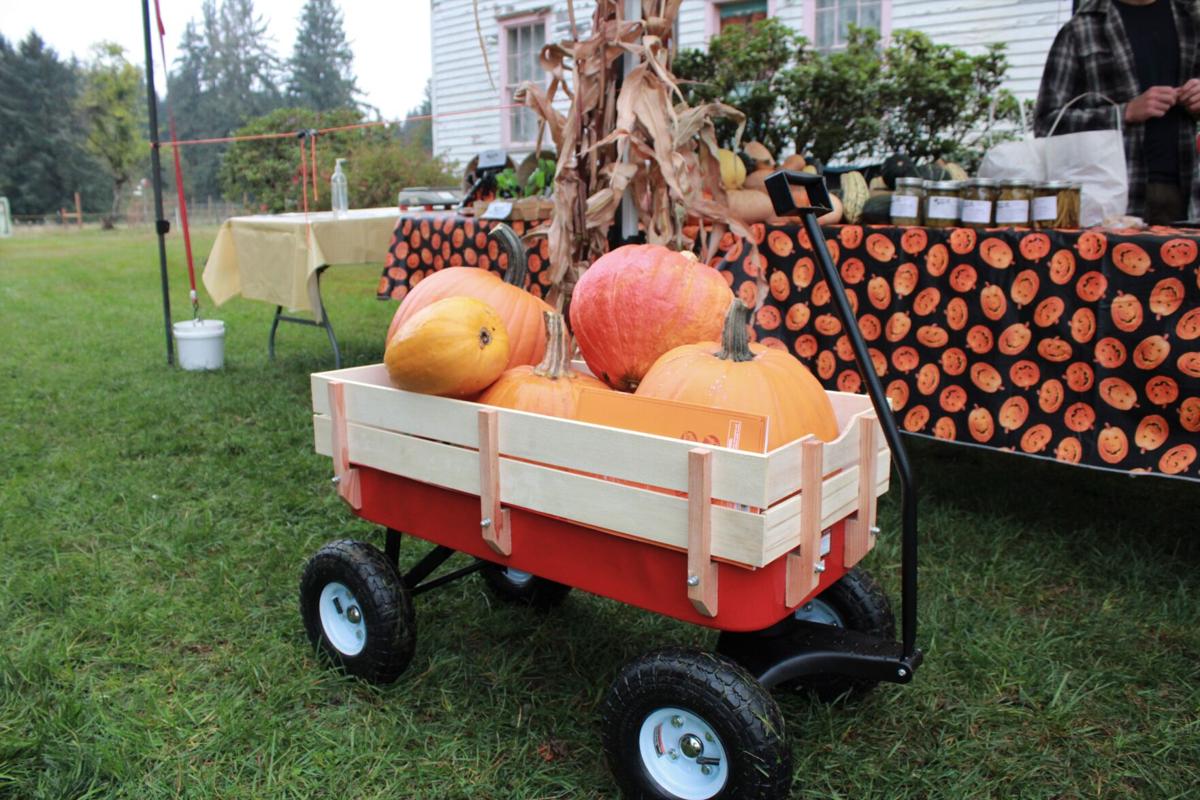 Customers can fill wagons full of pumpkins as they walk along the pumpkin path. 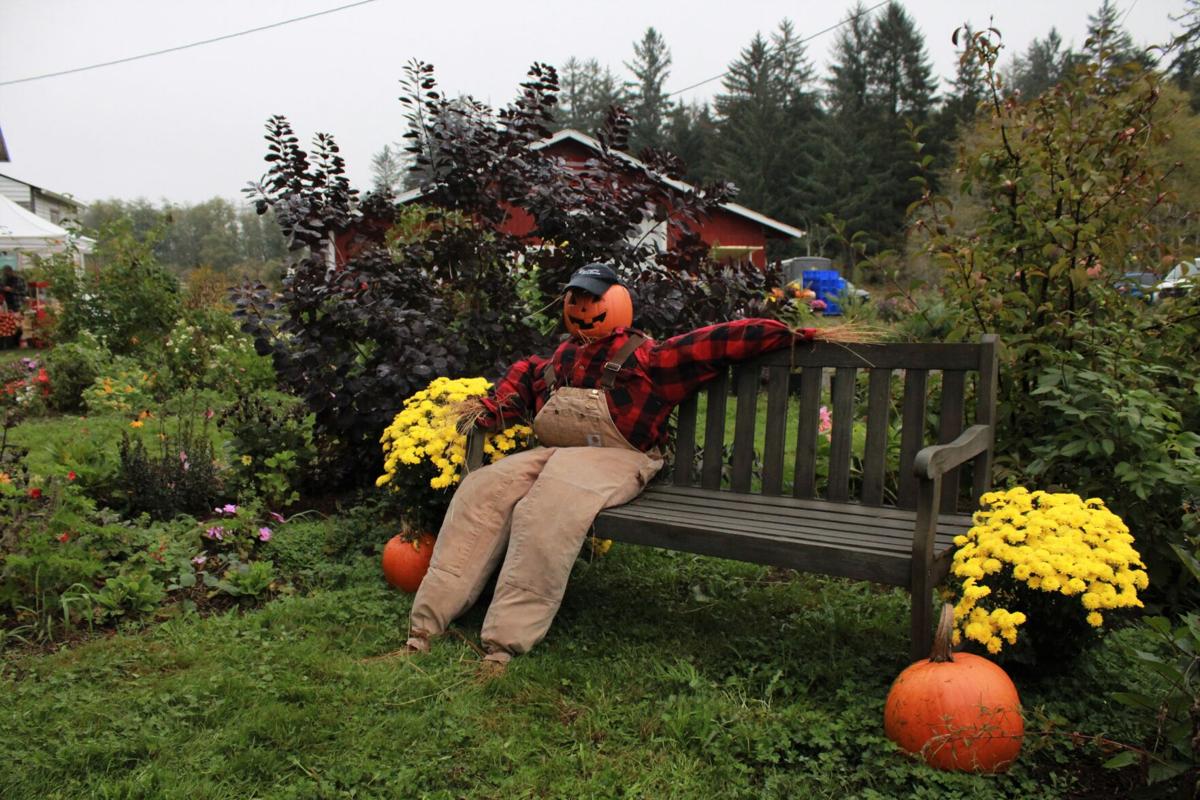 A scarecrow sits on a bench in the pumpkin path, waiting for customers to come take a photo with him. 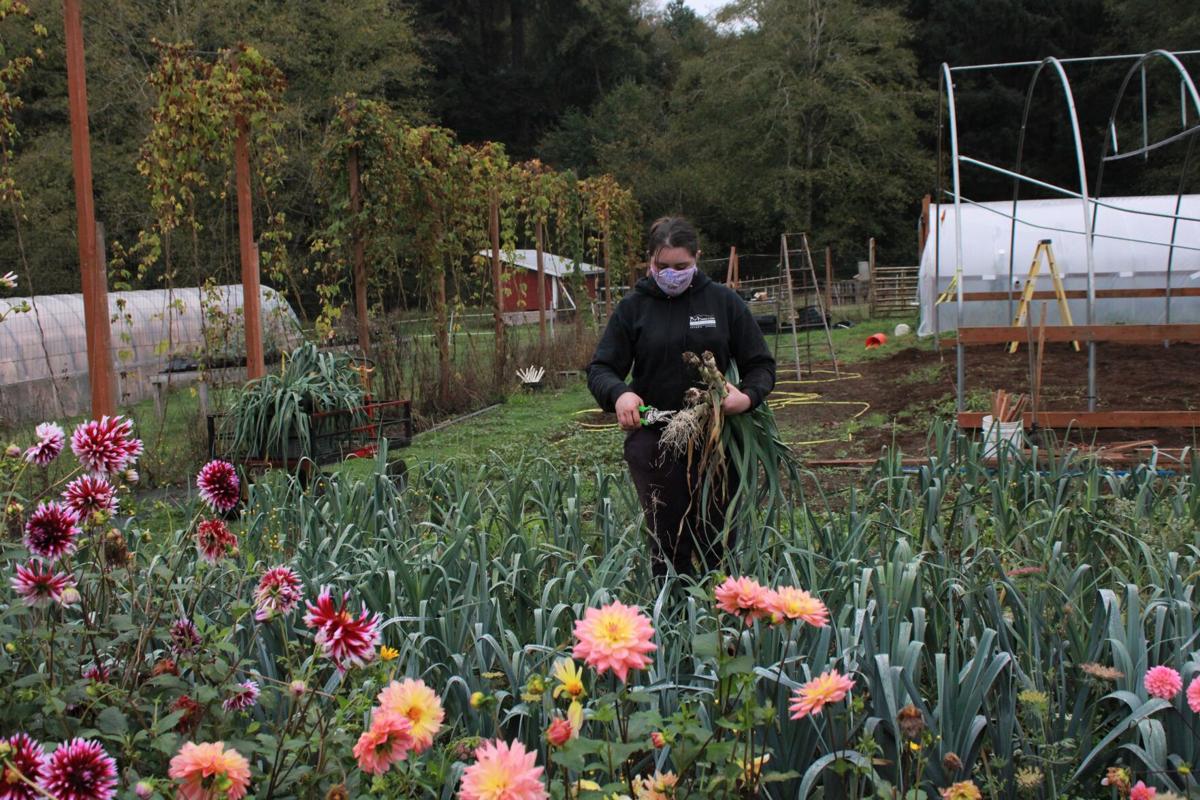 Andrew Thompson, left, and Scott Thompson pose for a photo at their farm.

Blackberry Bog Farm is open from 10 a.m. to 5 p.m. Saturdays and Sundays throughout October for visitors to walk through the "pumpkin path."

Andrew Thompson feeds a piece of zucchini to a Highland cow.

The Highland cows at Blackberry Bog Farm perk up when they see Andrew Thompson bringing them a snack.

The pumpkin path features displays of pumpkins and mums.

Blackberry Bog Farm's dahlias are in full bloom this month.

Scott Thompson gives a tour at his Svensen farm.

Blackberry Bog Farm has a garden of dahlias.

Andrew Thompson, left, and his father, Scott Thompson, at their farm in late September.

Blackberry Bog Farm in Svensen sells a variety of produce and plants, including pumpkins.

Customers can fill wagons full of pumpkins as they walk along the pumpkin path.

A scarecrow sits on a bench in the pumpkin path, waiting for customers to come take a photo with him.

Watch the video of the Highland cows, pumpkin path and more at bit.ly/2SNoNJj.

Scott and Bonnie Thompson, owners, and their son, Andrew Thompson, in charge of nursery operations

Could you both introduce yourselves?

ANDREW: And I'm Andrew Thompson and I run the nursery operations.

Could you tell me about the history of the farm before you bought it?

SCOTT: What we've learned about the history of the farm from our neighbors and from the seller of the farm, is the farm, as best as we can tell, was established in the 1880s. And it was significantly bigger at that time, it was 70 or 80 acres and now we're at about 30 acres. We were told that the main farmhouse, which was built in what we think was 1884, was built with onsite materials or materials that had been floated up Bear Creek from Svensen Slough.

When the house was originally built, the bay windows and the front door actually faced to the north. And then later, we can see how it was shifted around. We believe that up until the 1970s, they sent milk to the creamery in Astoria. So it was a small dairy farm. People who grew up in the area remember them having Guernsey cows, in particular, a very large Guernsey bull that lived in the front pasture.

And it was owned from the 1920s until we purchased it in 2015, by the Pitkanen family — by three generations of Pitkanens — Willem, and then Einar, and then it passed to his daughter, Judi Pitkanen-Johnson.

Why did you buy this property in particular?

SCOTT: You weren't here for that where you, Andrew?

ANDREW: I kind of was.

SCOTT: So we'd been looking to purchase a farm. My wife, Bonnie, is an integral part of the farm. And she wasn't able to be here for the for this today.

ANDREW: Actually, no, they were looking to purchase a house. Specifically, this just happened to be one of the houses that they ended up looking at.

And so we were looking for a house, we were renting in Gearhart, and we saw this come on the market. And so we came and visited.

It had been basically abandoned for about 15 years, since about 2000. It was in disrepair, would be a kindly way to say it. Barns had collapsed. The houses were in very bad shape. The fences were overgrown, the driveway was overgrown. It had been left for a long time.

When we came to visit, Bonnie and the realtor wandered through the houses, I was in the fields with a shovel taking soil samples. And we both came to the conclusion that this would be something that we could develop.

We looked at it first in the fall of 2014 and we purchased it the first weekend in January 2015. We remodeled one of the two homes that's on the property. And it was always with the idea that we wanted to farm but we didn't know what we wanted to farm.

And we would see what the market demanded. And so that's a story in itself as to how it's evolved over the last six seasons.

A lot of rich history.

SCOTT: There is, yes.

What are some of your favorite parts of the job?

ANDREW: Well, I do the nursery so that's obviously one of my favorite parts. I do like it a lot because of the ability to just make basically unlimited plants out of things that I find that are cool, that a lot of people probably haven't even heard of.

So most of the plants that are out here in this garden that we're sitting in, we sell. And a lot of those I can propagate by cuttings, and a lot more I can get from seeds, but there's just such a variety out there.

At one point I think we had like 14 types of lavender. I've scaled that back a little bit because it's overwhelming to people who just want a lavender plant, but I really like just being able to have that endless variety of different plants.

SCOTT: So this is why Andrew runs the nursery because to me, what I like about this is the ability to feed my neighbors. Andrew grows a lot of vegetables, vegetable starts, and we work together on propagating fruits and berries. But a lot of what Andrew does is ornamental, but primarily what I do is feeding people.

So now we focus on the nursery and on the produce and berries. We have an acre of berries, an acre of fruit trees and an acre of produce. And then we have the nursery business which starts in March.

With that, we have early spring ornamentals with cool season vegetable crop starts, and it will go all the way up until the weeks before Christmas, with poinsettias and eventually Christmas trees, which we've planted out back.

And wreaths that we intend to make on site. So really, it'll be a 10-month-a-year operation out of the nursery.

So since this is for the October Meet the Merchant, what are you planning to harvest in October?

ANDREW: In October for nursery stuff, we've got fall mums. And that's mostly what people buy this time of year. The mums have a beautiful color, fall colors, the purples and the oranges.

Other than that, there's some perennial stuff that people like to plant like hydrangeas and stuff that'll come back next year, but really at this time, it's those fall mums.

SCOTT: As far as produce goes, we're just getting into all of our fall pumpkins and winter squashes.

We have ornamental pumpkins. And here at the farm we have a pumpkin path, P-A-T-H, where people can walk through a nice garden. Our pumpkins are on display and we have wagons that you can tow along to carry your pumpkins.

And so we have ornamentals, the white ones and the blue ones and the flat ones and the tall ones. Then every Sunday afternoon here at the farm we sell produce. And so at this time of year, it's the winter squashes, we still have sweet corn, we still have green beans. We have broccoli, we have cabbage, you know those fall sorts of crops.

Throughout this year, we've done what's known as a CSA or community supported agriculture. And we do pick ups here on the farm on Wednesdays and Sundays.

This is our 6th year as a vendor at the Seaside Farmers Market, which is on Wednesdays. The Seaside Farmers Market got canceled twice because of smoke. From a business perspective the smoke has probably affected us as much as anything this season. Then last week was very rainy, and we were one of two vendors who showed up in Seaside.

We also deliver CSA baskets to Seaside and this year we did 50 CSA baskets, and that's a half bushel of produce and berries per week to each person who signs up for that.

When will you be open for visitors to come out to the farm in October?

SCOTT: Through all the weekends in October, we plan to be open between 10 a.m. and 5 p.m. on both Saturdays and Sundays, up to Halloween day itself, October 31, it's on a Saturday this year.

We do sell pumpkins that we grow and we have a finite number of them. We have hundreds of them, but we also have to see what the demand is. We should have produce available for sale Sundays as well.

What are your goals for the future?

Our first year, we did a lot of cut flowers and then gradually we put in berries.

For strawberries, you get a return on the first year, but we then put in 300 blueberry bushes.

And each year for five or six years of blueberry bushes getting larger, we get more blueberries, but they're just in their third summer. So over the next, you know, two, three years, we'll get more production from them. Same with our raspberries or blackberries.

As those trees mature, we're going to keep having more and more to the point that we will have literally tons of fruit five years from now. So we were able to provide just a sampling to our CSA customers this season for some of those berries and those tree fruits, but in the future, we'll be able to focus more on that.

Is there anything else you wanted to add?

SCOTT: We have received so much support from our customers, from our neighbors, through this past summer. And I'd like to use this as an opportunity to thank them for their support.

It has been for all of us an unusual past six months, and it has been here as well. But we've just had wonderful support from those around us and I want to say thank you.