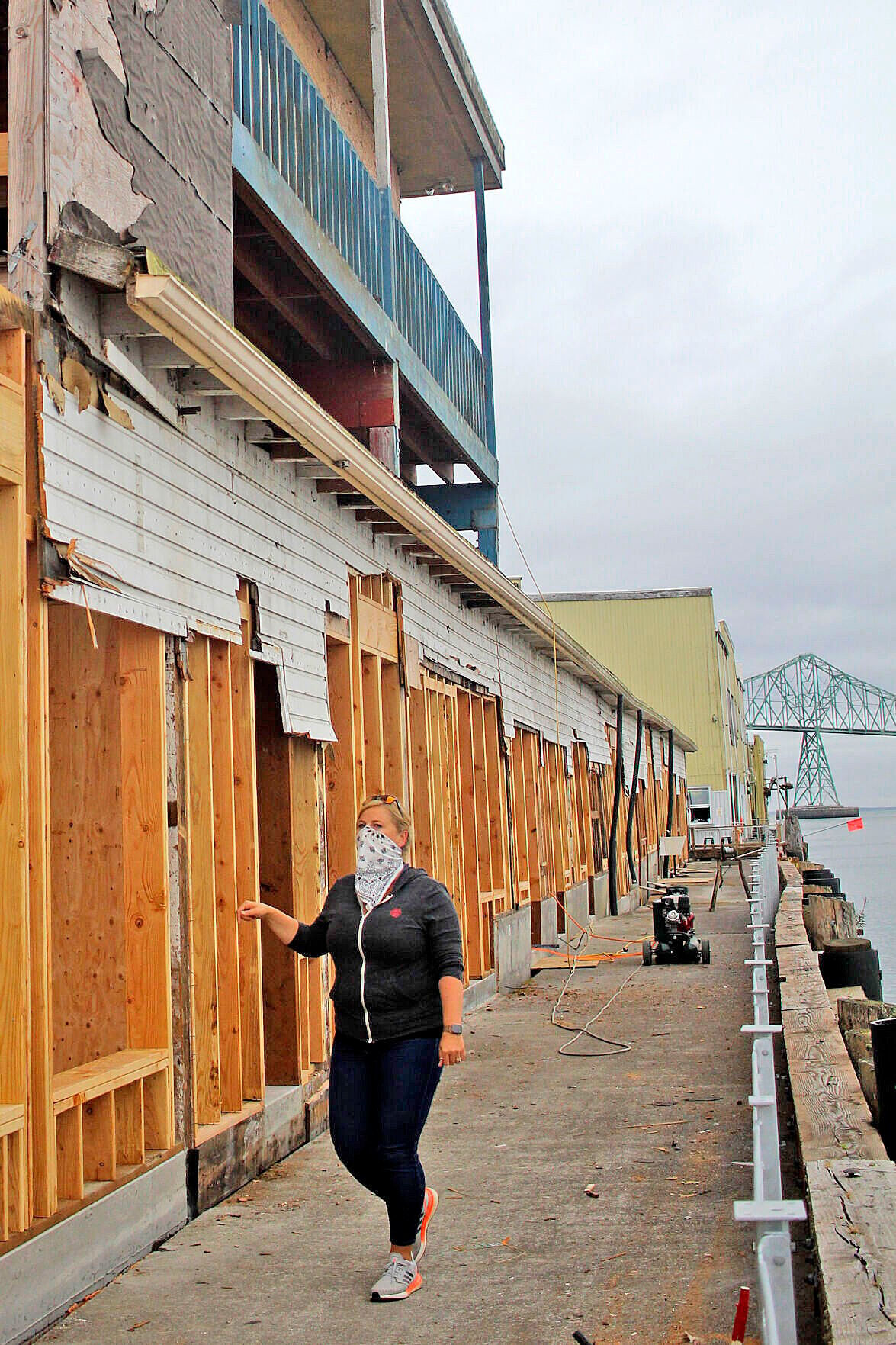 Tiffany Turner of Adrift Hospitality walks along the Columbia River waterfront in front of the Bowline Hotel, which her company and members of Bouy Beer Co. are building in downtown Astoria. 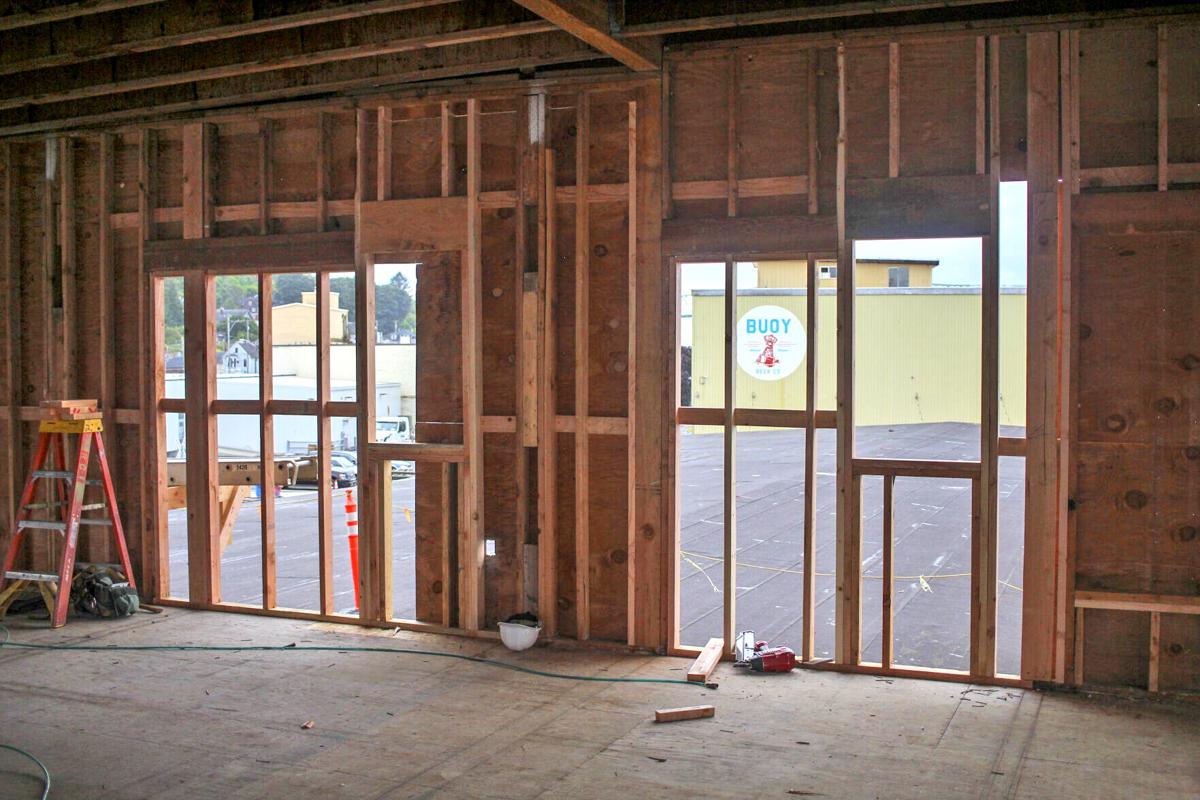 Members of Adrift Hospitality and Buoy Beer Co. partnered on the Bowline Hotel, under construction next to the brewery in downtown Astoria. 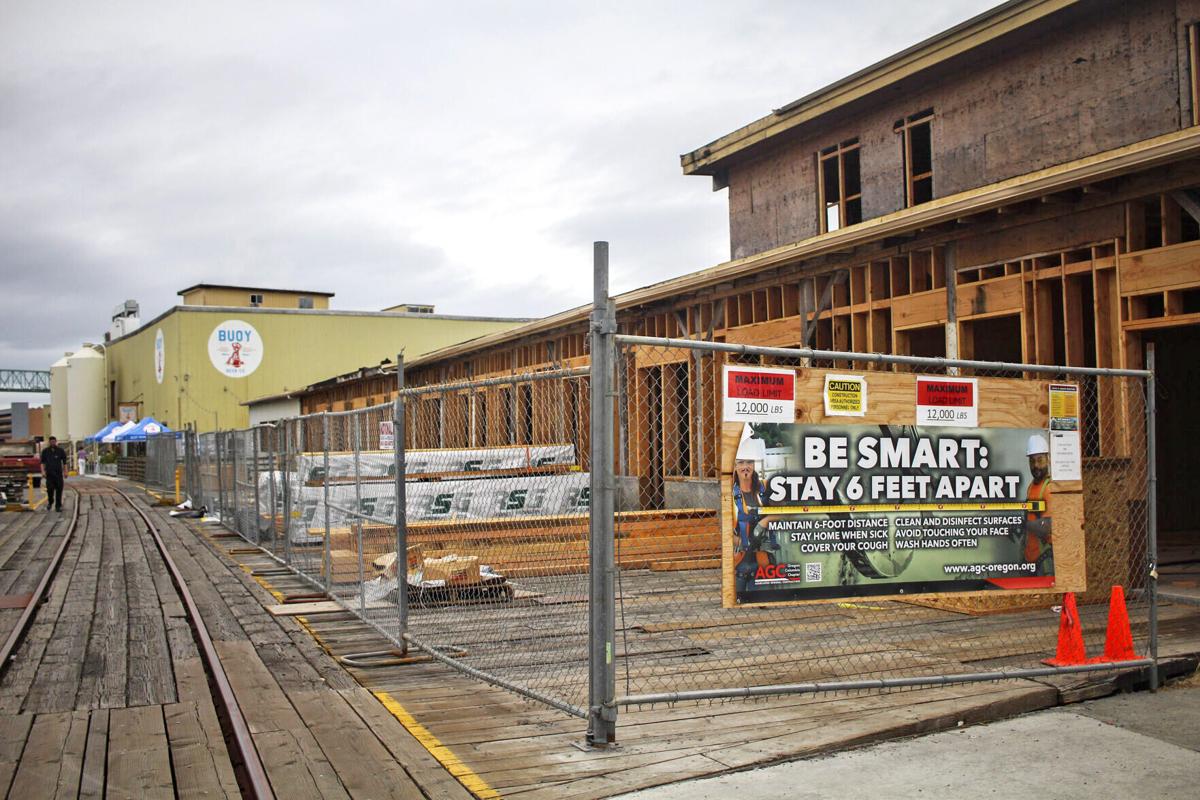 Progress picked up on the 39-room Bowline Hotel last month after Craft3, the funding agent, reapproved the project following the onset of the coronavirus.

Tiffany Turner of Adrift Hospitality walks along the Columbia River waterfront in front of the Bowline Hotel, which her company and members of Bouy Beer Co. are building in downtown Astoria.

Members of Adrift Hospitality and Buoy Beer Co. partnered on the Bowline Hotel, under construction next to the brewery in downtown Astoria.

Progress picked up on the 39-room Bowline Hotel last month after Craft3, the funding agent, reapproved the project following the onset of the coronavirus.

ASTORIA — When the coronavirus pandemic hit pause on the economy this spring, that included the funding for the new boutique Bowline Hotel on the Columbia River waterfront in Astoria next to Buoy Beer Co.

“We kind of paused everything, because Craft3, our funder, wanted to reevaluate funding, essentially,” said Tiffany Turner, a partner in the project through her company, Adrift Hospitality.

Activity picked up last month at the Bowline after the regional lender re-approved the funding and Rickenbach Construction began building out the inside with a hope of opening next spring.

Turner and her husband, Brady, own and operate several boutique properties along the North Oregon Coast and Long Beach Peninsula in Washington, including Adrift, Boardwalk Cottages and Inn at Discovery Coast in Long Beach; the Shelburne Inn in Seaview, Washington; and Ashore Hotel they opened in Seaside several years ago. They also own Adrift Distillers and the Pickled Fish restaurant in Long Beach.

The hoteliers partnered with members of Buoy Beer and others in Bowline Investors in an effort to convert a former sardine cannery into 39 boutique rooms looking over the Columbia on one side and the Astoria Riverwalk on the other. The partners canceled plans for a fine seafood restaurant in a former icehouse next door but will still retrofit the building into luxury suites.

When the pandemic hit, Craft3’s board wanted to ensure the members of Bowline Investors felt comfortable moving forward and repaying the loan, Turner said.

“It was frustrating, but totally fair and reasonable,” Turner said of the holdup. “It ended up being about a month-long pause, but now we’re full speed ahead.”

Turner was one of the first hoteliers in the Lower Columbia region to shut down her hotels for a couple of months but said tourism remains strong, with people trying to escape cities for less densely populated areas.

Just west of Bowline Hotel and Buoy Beer, Bellingham, Washington developer Mark Hollander is scrambling to keep his original concept of a four-story Fairfield Inn & Suites from being chopped down by new, more restrictive building codes.

After several denials and appeals, Hollander got permission from the Astoria City Council in 2018 to build the Marriott-branded hotel. The approval sparked new, more restrictive development code restrictions, lowering most allowed buildings from four to two stories and changing their orientation to north-south to preserve views of the Columbia.

Hollander has made little progress on his hotel since then. He was recently denied a building permit extension from Astoria he argued was necessary because of poor economic conditions, despite several other hotel projects moving forward. Hollander is appealing the decision to the Oregon Land Use Board of Appeals.

Near the New Youngs Bay Bridge, Astoria Hotel Investors, a Kansas City-based group, is moving toward building permits on a new Home2 Suites, an extended-stay Hilton brand. John Ferguson, a member of the partnership, echoed Turner’s comments about people trying to escape the city.

“In the big cities, you have occupancies of under 10%,” he said in July. “And in the more rural communities, where people can drive, there’s enough pent-up demand to get out of the house.”

Ferguson is hopeful the Hilton can also open before next summer's tourist season.

WASHINGTON, D.C. — Ongoing hotel construction and planning in Astoria runs counter to the state of the hotel industry in the nation as a whole.