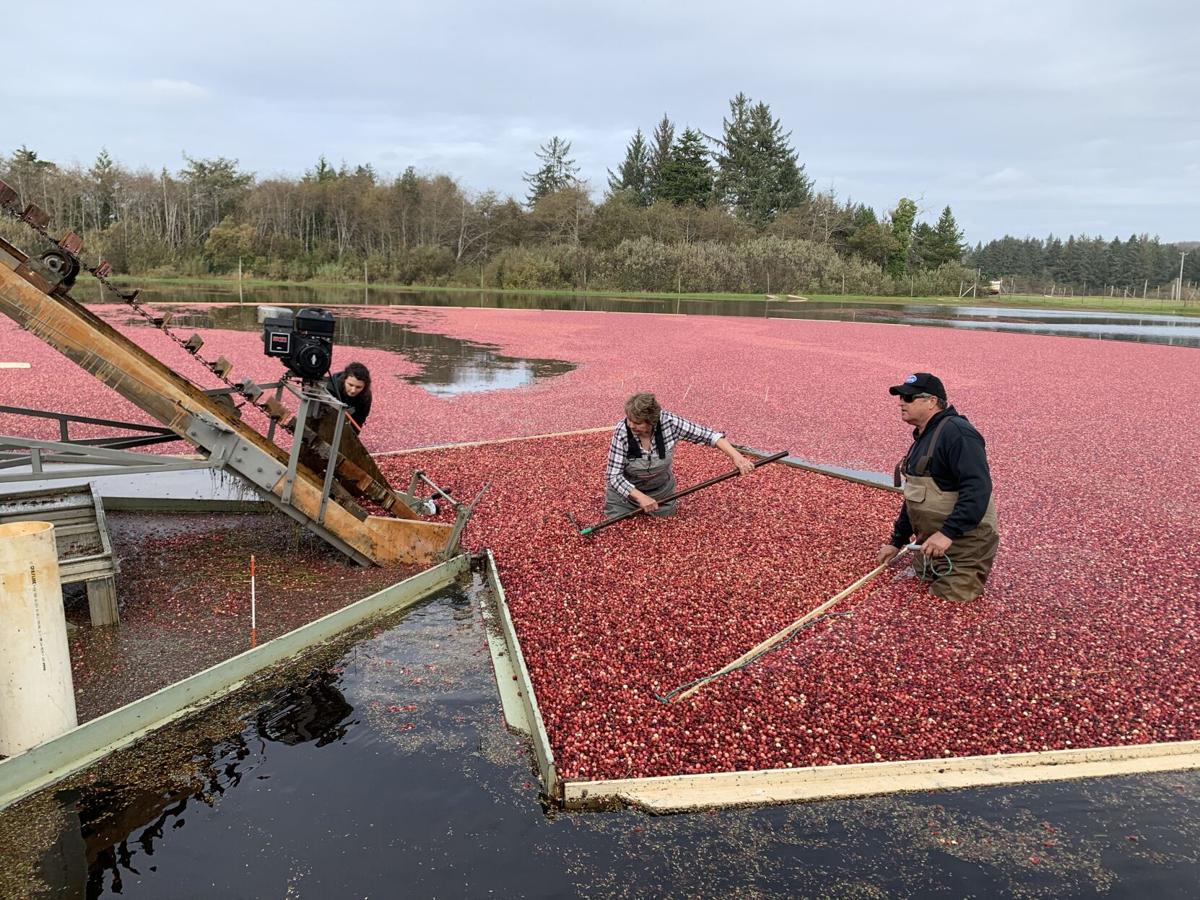 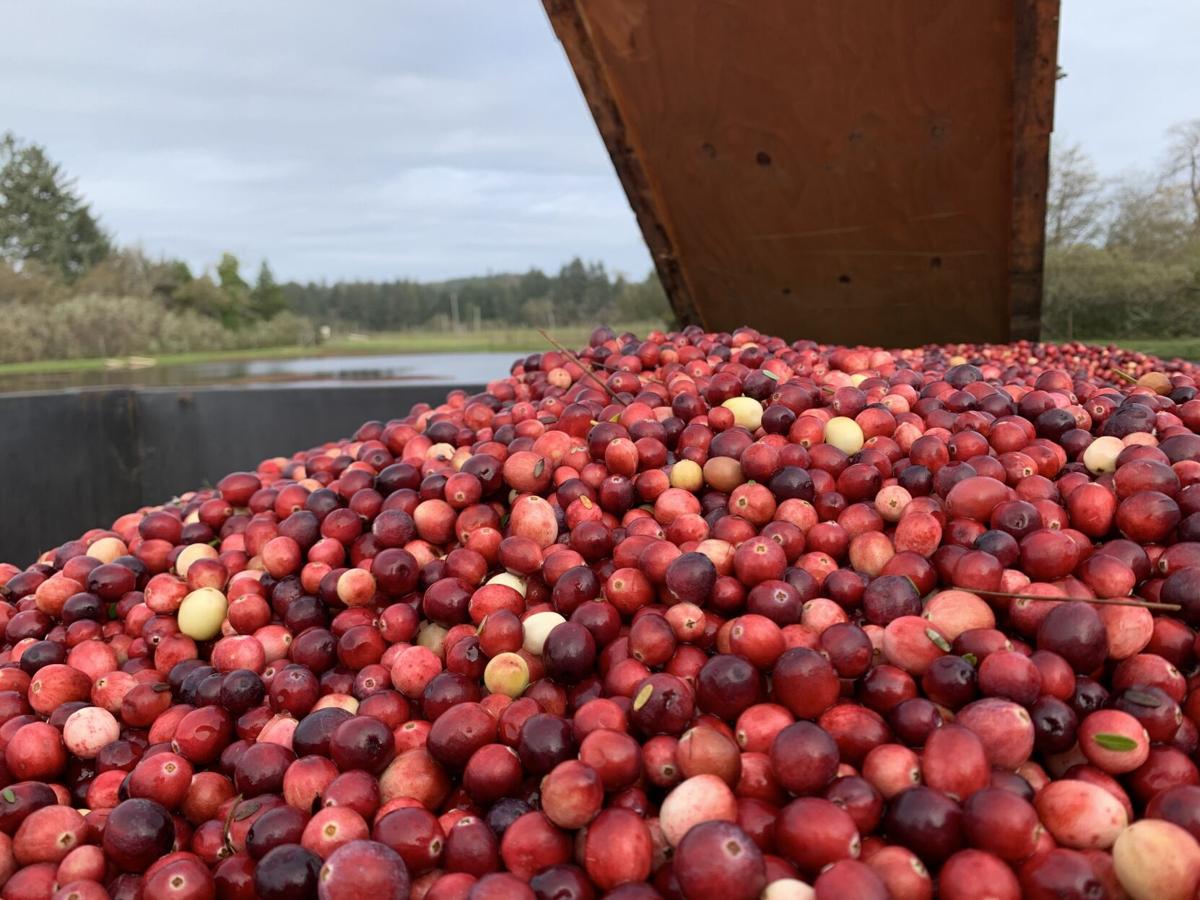 The view of cranberries from the top of the Bogh Farm truck. 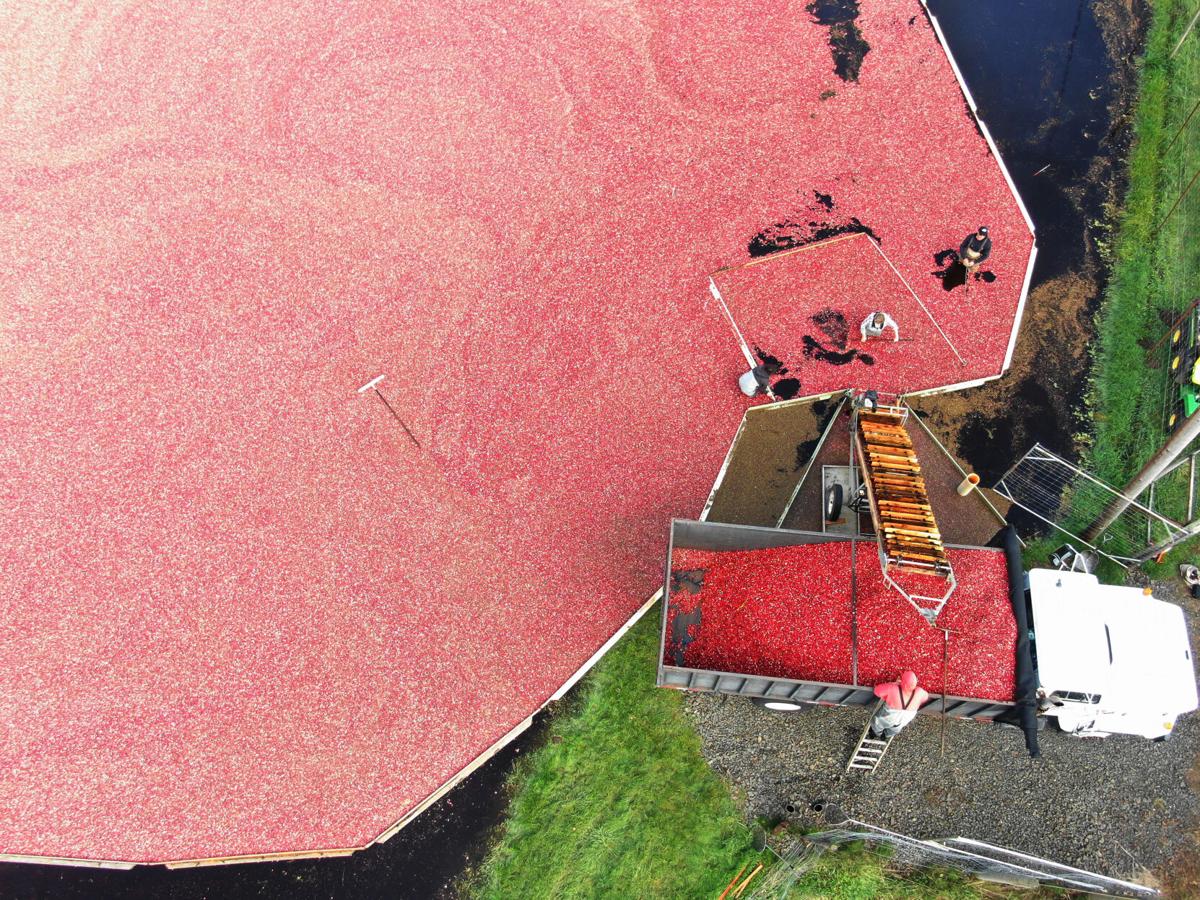 Chloe Little, Trinda Bogh and Dan Bogh push the cranberries toward a moving ladder while Justin Bogh monitors the ladder from the top of the truck. 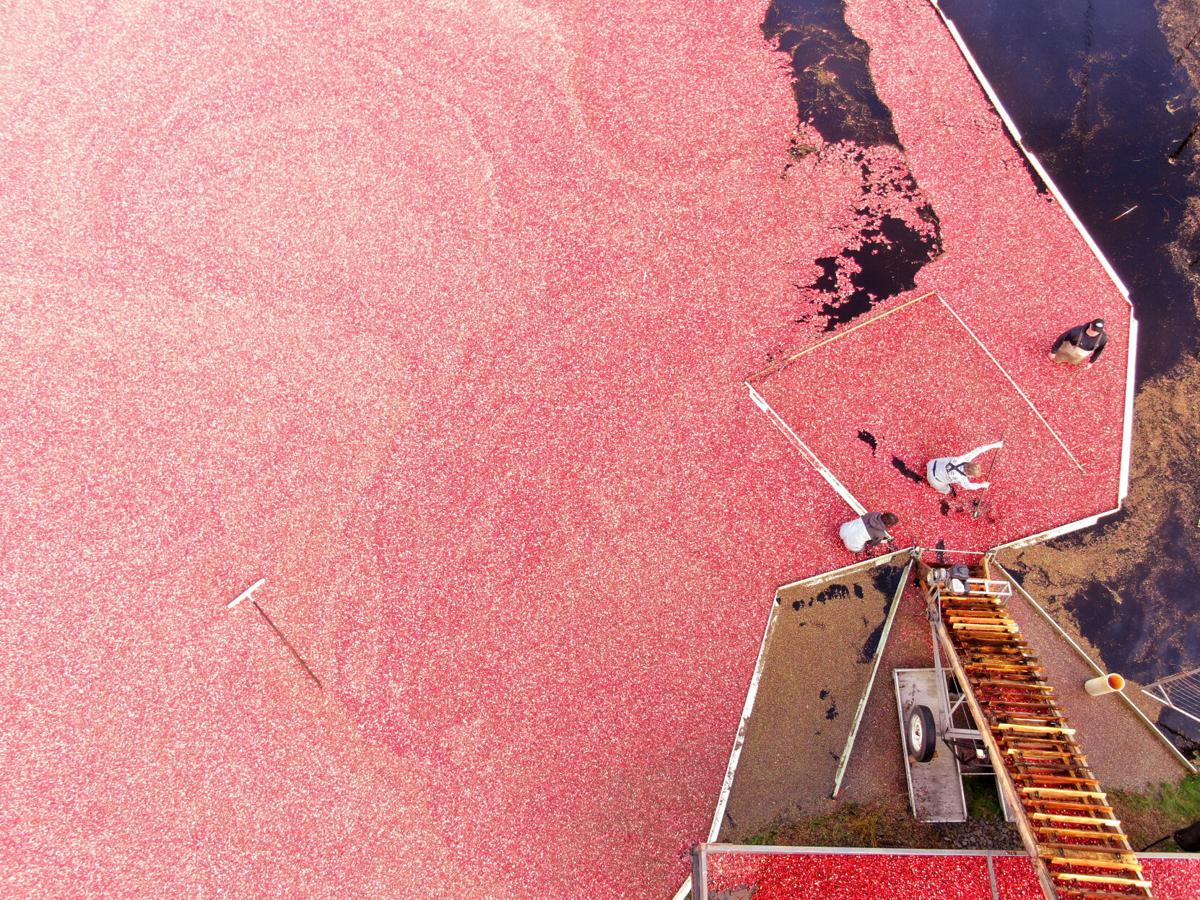 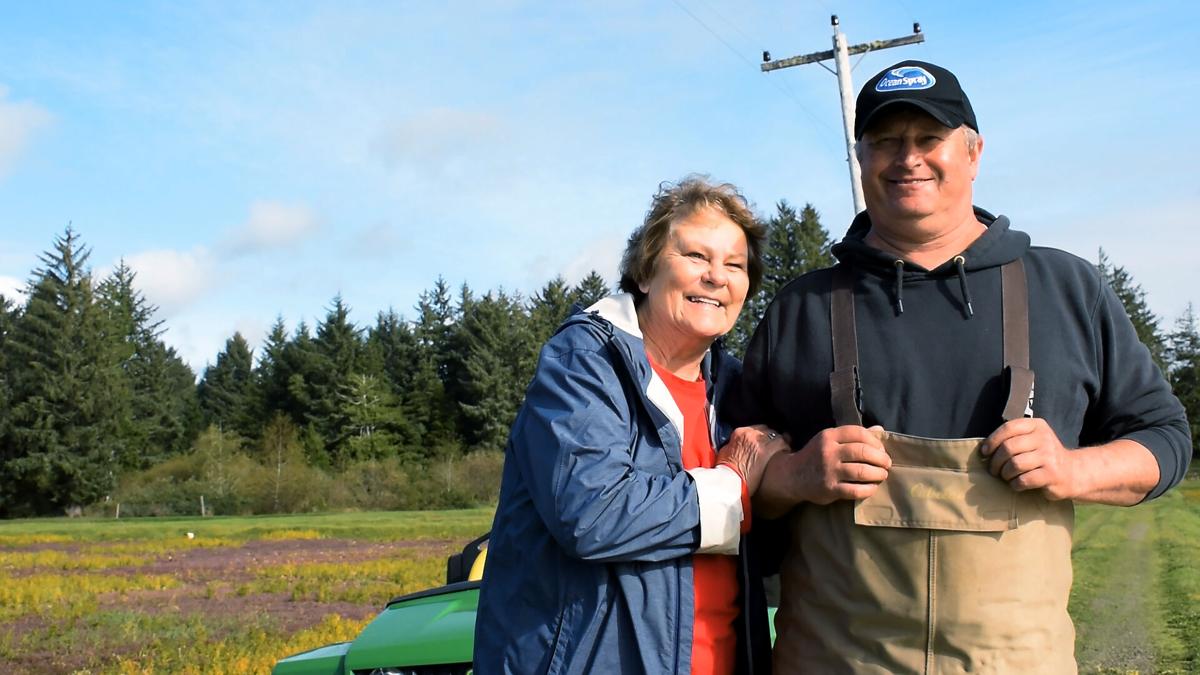 Trinda and Dan Bogh at their farm in October. 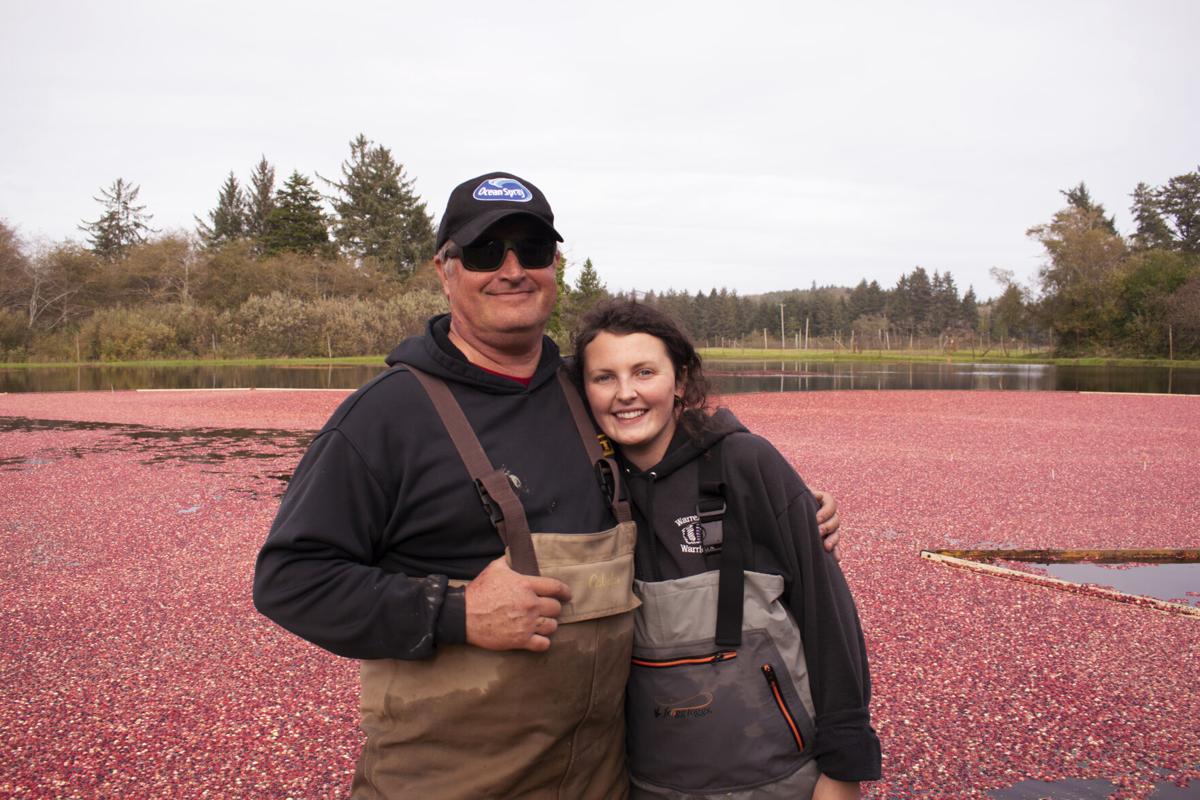 Dan Bogh and granddaughter Chloe Little in one of their bogs in October. 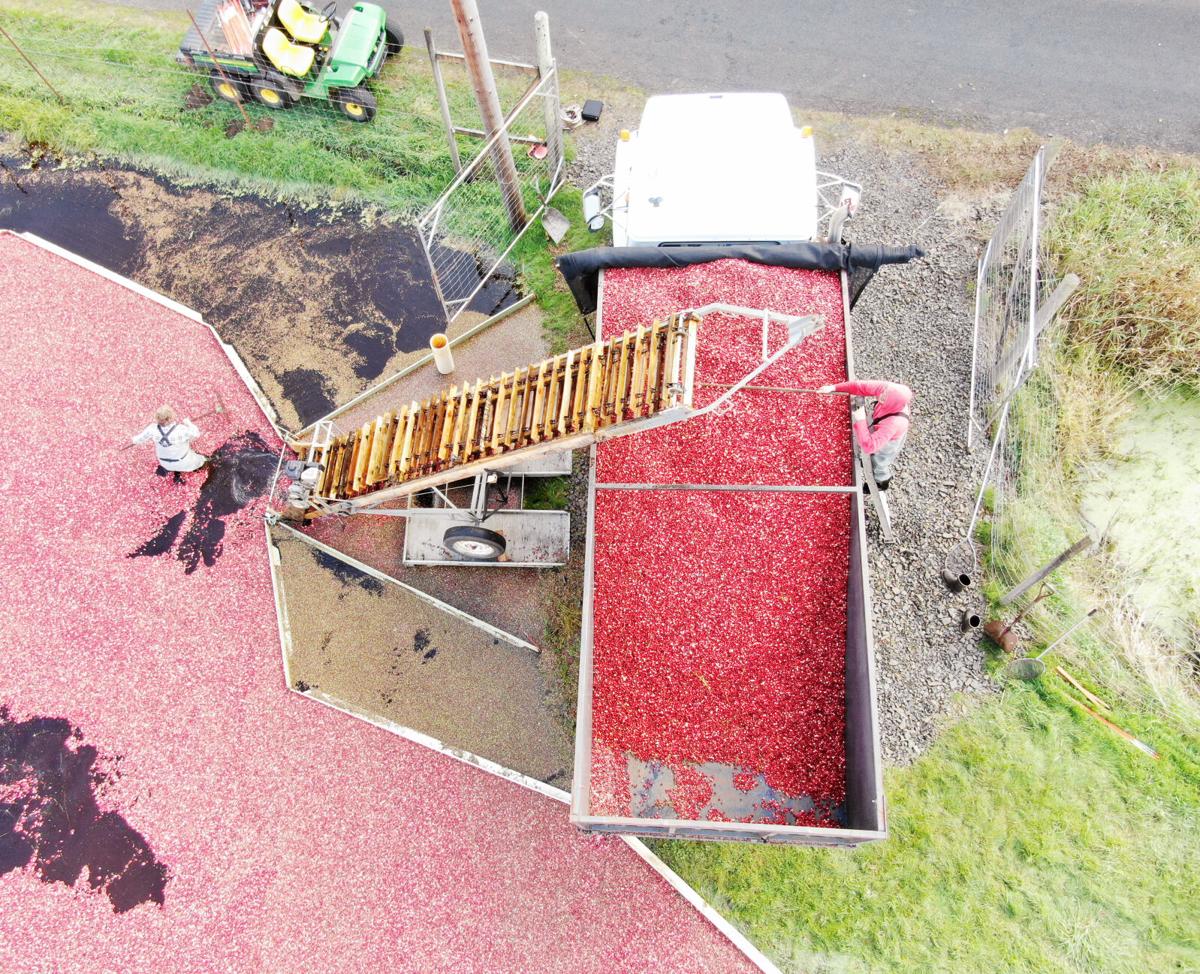 The Bogh family loads the cranberries into a truck in October. 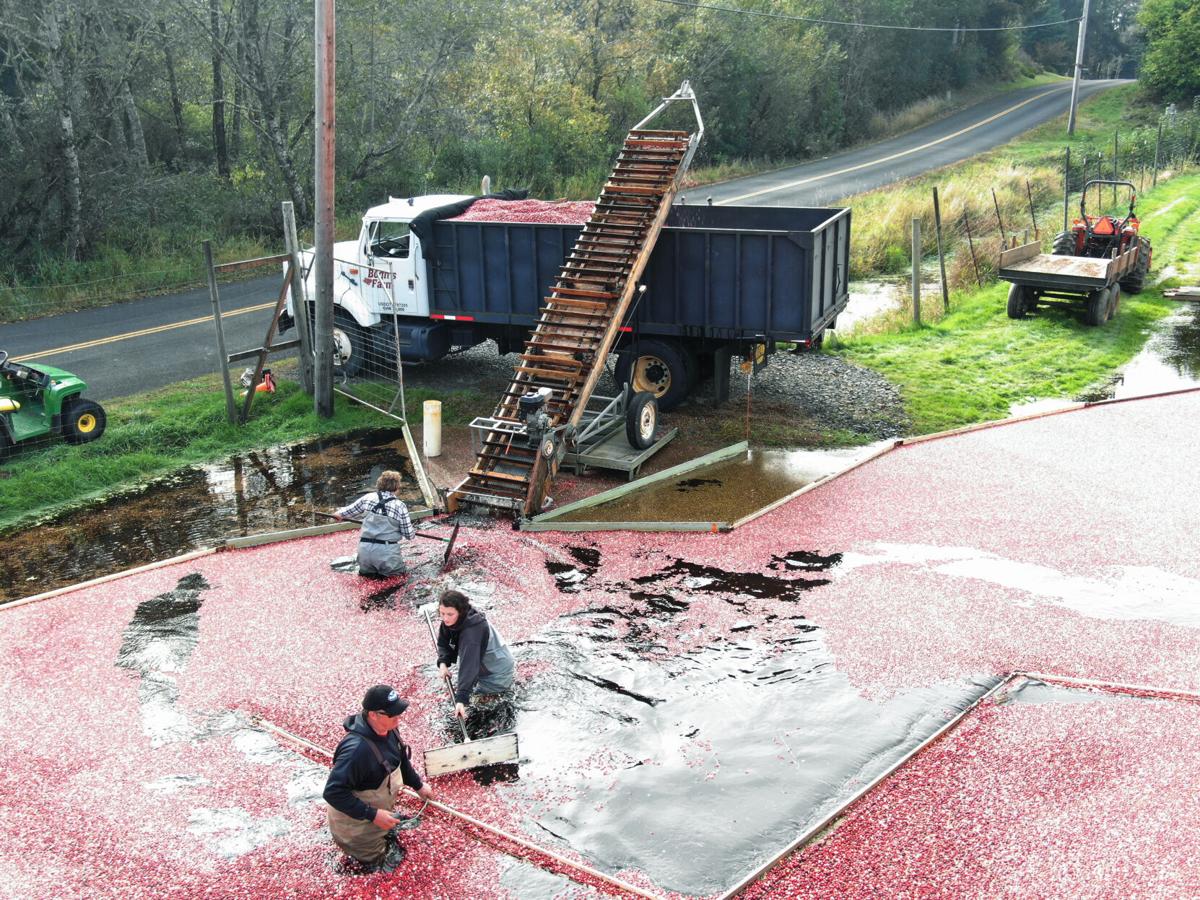 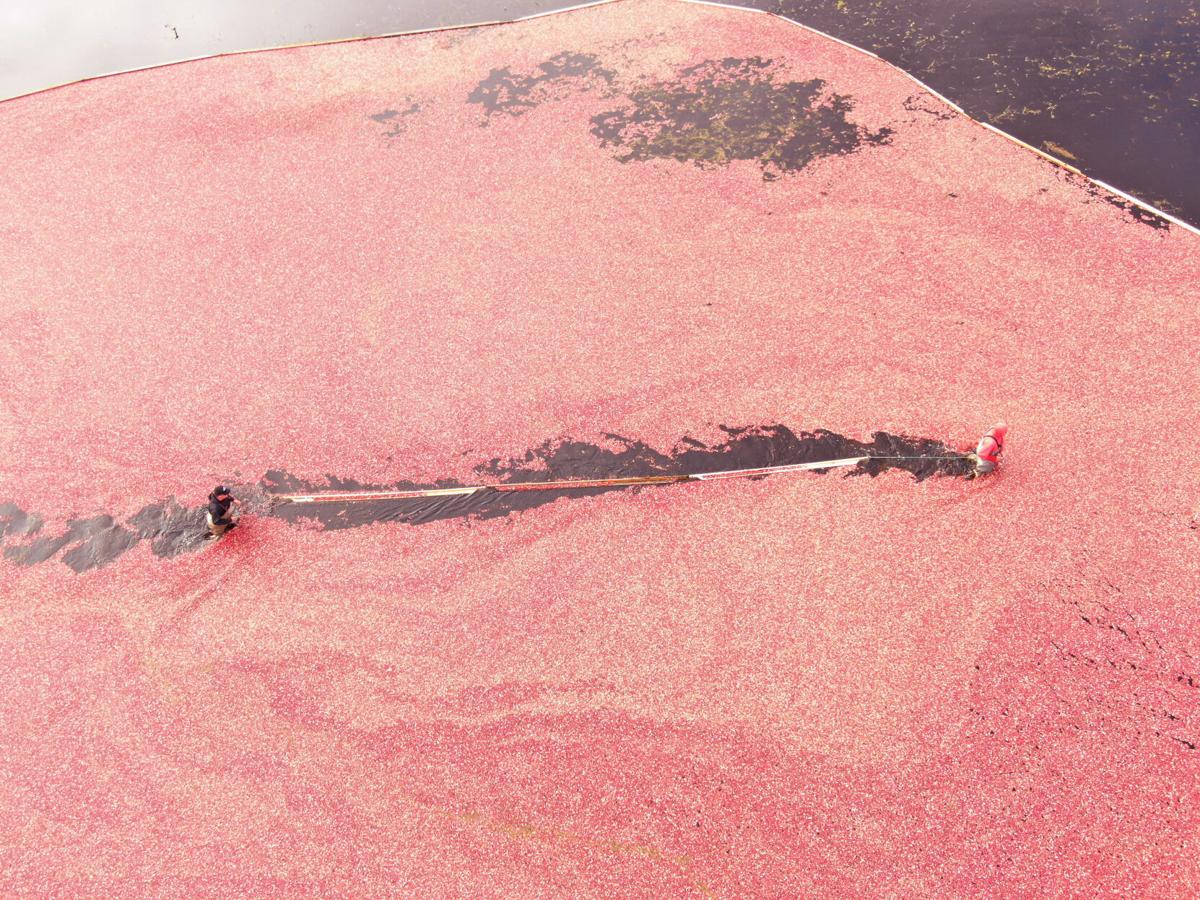 Dan Bogh, left, and son Justin Bogh corral the cranberries in one of their bogs. 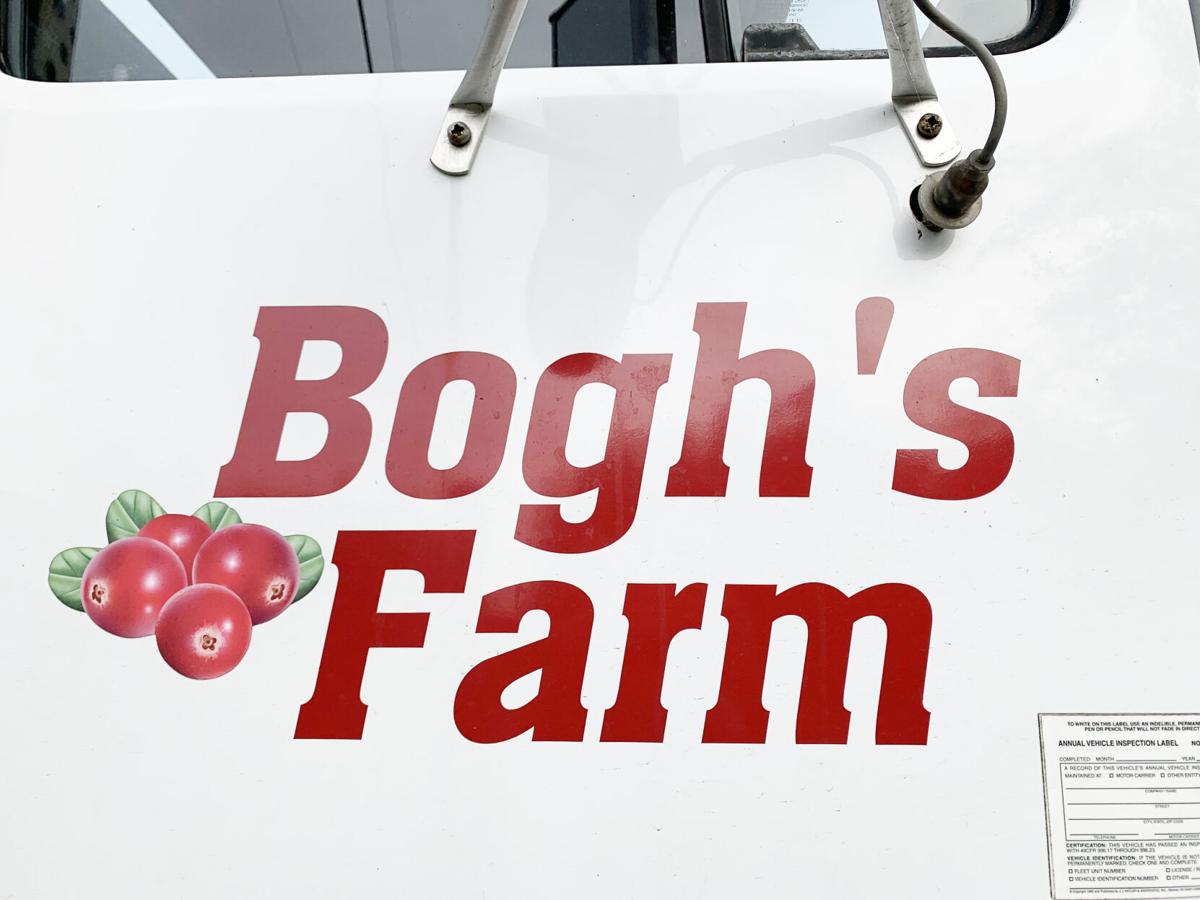 Bogh's Farm is an Ocean Spray farm in Gearhart. 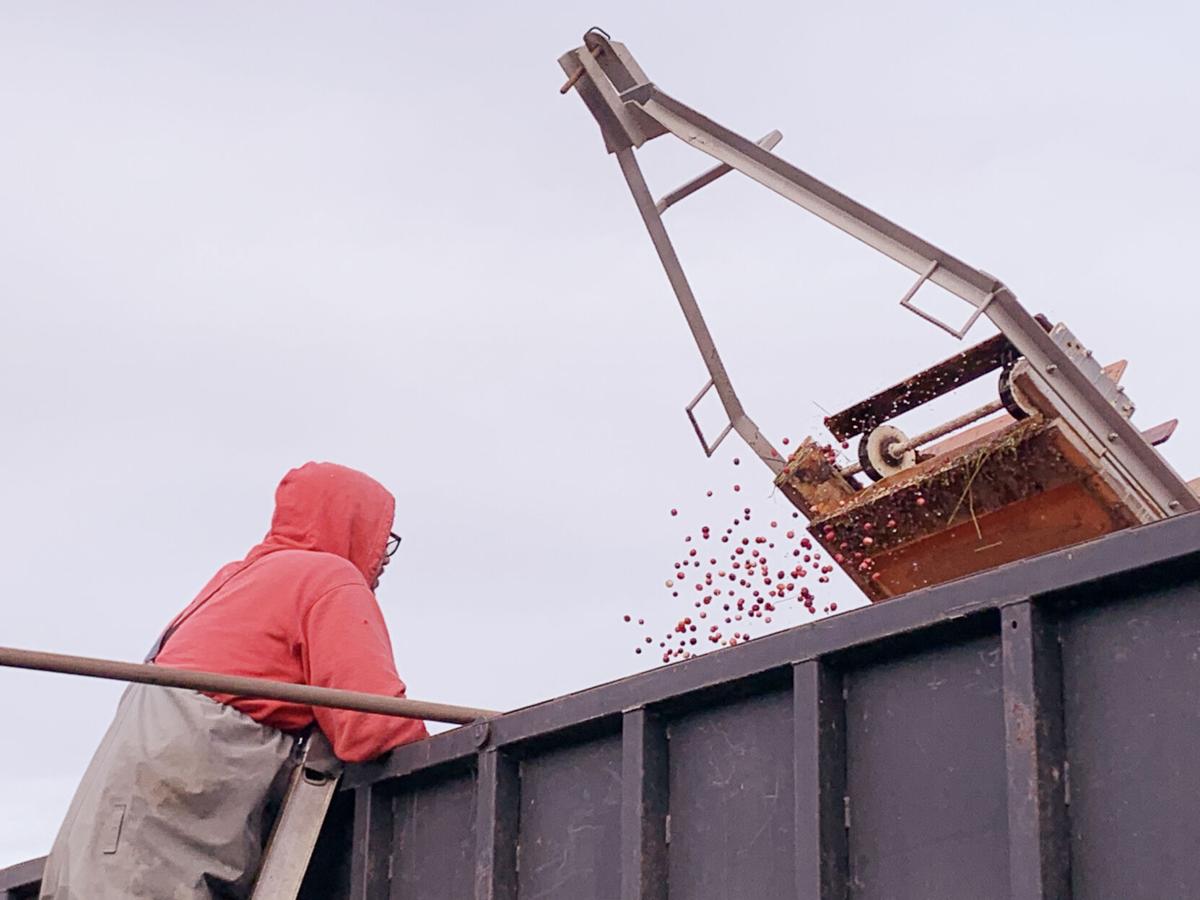 Justin Bogh monitors the cranberry ladder at the top of the truck.

The view of cranberries from the top of the Bogh Farm truck.

Chloe Little, Trinda Bogh and Dan Bogh push the cranberries toward a moving ladder while Justin Bogh monitors the ladder from the top of the truck.

Trinda and Dan Bogh at their farm in October.

Dan Bogh and granddaughter Chloe Little in one of their bogs in October.

The Bogh family loads the cranberries into a truck in October.

Dan Bogh, left, and son Justin Bogh corral the cranberries in one of their bogs.

Bogh's Farm is an Ocean Spray farm in Gearhart.

Justin Bogh monitors the cranberry ladder at the top of the truck.

Watch the video of the cranberry harvest at bit.ly/2GKWp8z.

Before families gather around the dinner table and enjoy cranberry sauce during the holiday season, a family in Gearhart gathers in a bog to harvest the bright red fruit.

An Ocean Spray farm owned by Dan and Trinda Bogh off Dellmoor Loop is one of four cranberry farms on the North Coast. The Boghs and their family members work together to grow the cranberries in a year-round process and harvest them each fall.

Throughout September and October, the Boghs flooded the bogs, beat the vines to release the cranberries, corralled the berries together and pushed them through the water into a moving ladder leading up to a truck. They worked alongside their family members, including son and farm manager Justin Bogh and granddaughter Chloe Little.

“It’s always kept our family together,” Dan Bogh said. “It's always that one thing you know, you go to grandma's for Thanksgiving or whatever. Well, the family would come here, and it's always been really neat.”

“Once your grandchildren get to be 18 and older, you don't see them as much anymore as you did when they were little guys,” Trinda Bogh said. “But now we have a cranberry farm so we get to see them all the time.”

Dan Bogh’s family has a rich history in the Gearhart bogs. His father came to the area in the 1960s to work on the Astoria-Megler Bridge. In 1978, his parents purchased a cranberry farm down the road from the current Bogh Farm.

As kids, Dan Bogh and his three siblings would help with the production.

“Every season, we were out in the bogs, which is a family tradition,” Dan Bogh said. “This farm became available about five years ago, so we purchased this one. And so it's just a natural flow into this and this is just kind of our little hobby.”

You don’t have to be family to come help out in the bog. Some curious people driving down Dellmoor Loop will stop by to check out the red watery fields in the fall.

“I will say ‘no, no looky loos, you must bring your hip boots’ and they'll say ‘do you have a pair? I'd love to get in,’” Trinda Bogh said with a laugh. “So we make a lot of friends out here.”

The Boghs grow seven different varieties of cranberries across their 25 acres and 11 bogs. Trinda Bogh said she loves to see the development of different cranberry varieties over the years, as the industry comes out with bigger, redder berries.

While the other Oregon bogs are further south in the Bandon area, the farms in Gearhart are grouped in with the closer cranberry farms in the Long Beach Peninsula. Once the Boghs load the cranberries into a truck, they deliver them to get rated, processed and cleaned at the Ocean Spray plant in Long Beach.

“The Washington folks have been so inviting from the very start five years ago, they just wanted to see us succeed,” Trinda Bogh said. “If we have any questions or need a piece of equipment or anything, all we have to do is pick up the phone and they're here. They're great people to work with.”

From the Long Beach facility, the cranberries make their way in trucks to a plant in Hillsboro, where most of them get frozen. Because of the deep red color of the cranberries that grow in the West Coast, the majority of Bogh Farm berries become juice or craisins.

“We have actually been to the Ocean Spray bottling plant on the West Coast, it's in Henderson, Nevada, and we watched the process of all the different juices being bottled,” Trinda Bogh said. “It's quite a process.”

Ocean Spray is owned by about 700 farmers, with each farm averaging 18 acres.

But the cranberry industry does not come without its challenges. The U.S. has been experiencing a cranberry surplus for years.

“Well, anytime, especially in the agricultural business, when you have a surplus, your prices are going to go down,” Dan Bogh said. “So that's what's happened with the farmers, that’s what we’ve been going through.”

Trinda Bogh said over the years, cranberry prices have run the gamut from 10 cents per barrel up to $60 per barrel.

“The market really fluctuates,” she said. “We're no different than fishermen or foresters, we depend on good old Mother Nature and folks who drink cranberry juice.”

However, the surplus has led to innovation for different ways to bring the cranberries to market.

Ocean Spray has gone beyond cranberry sauce and juice to products like chocolate-covered craisins and even cranberry dog food.

“That's another good thing about Ocean Spray, too, is they are constantly trying to find new avenues,” Dan Bogh said.