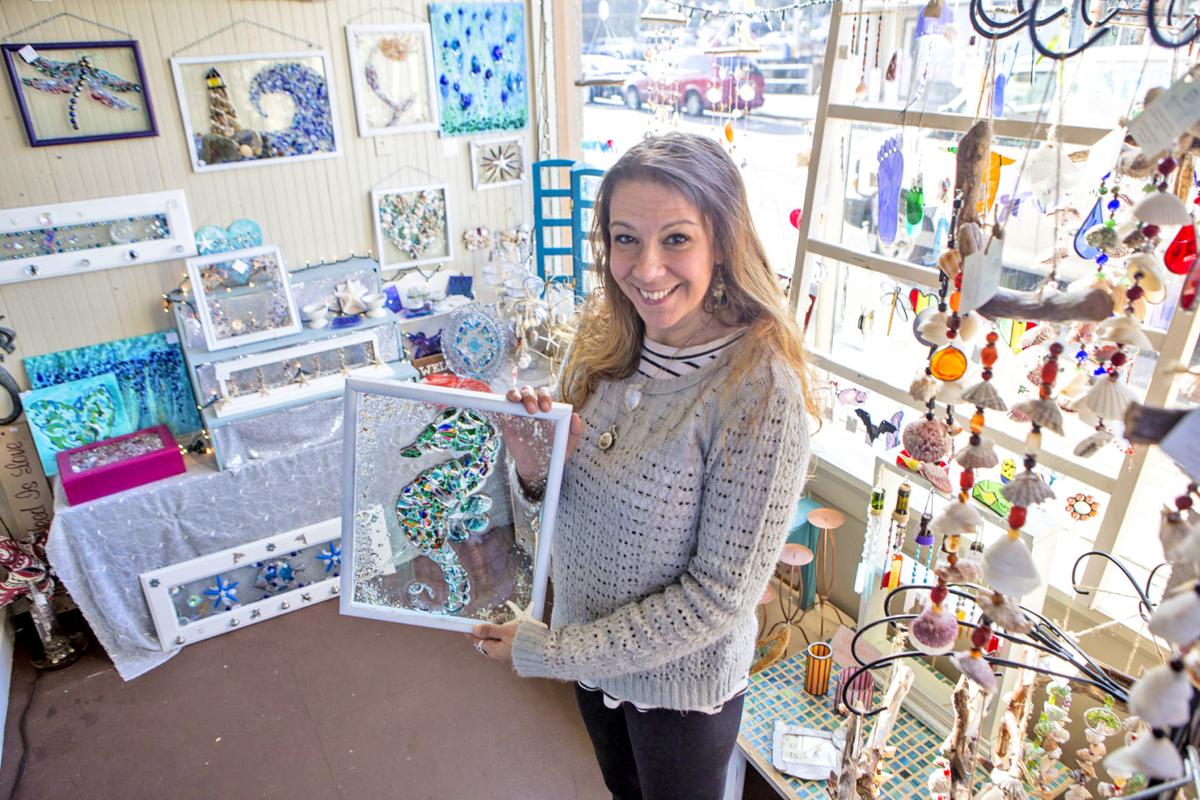 Sea Gypsy Gifts owner and artist Naomi Pena poses with one of her recent picture frames created using recycled glass. “We have more than 40 local artists in here. We try to specialize in recycling as much as we can,” Pena said. 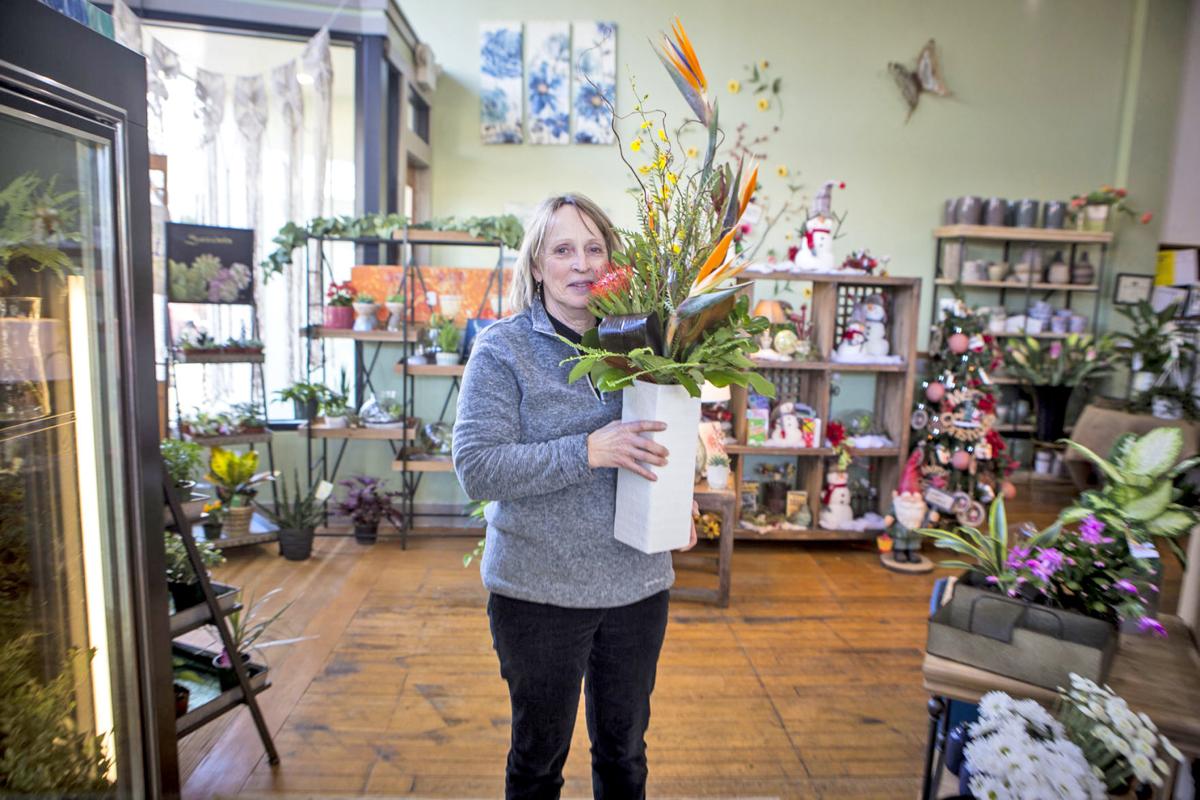 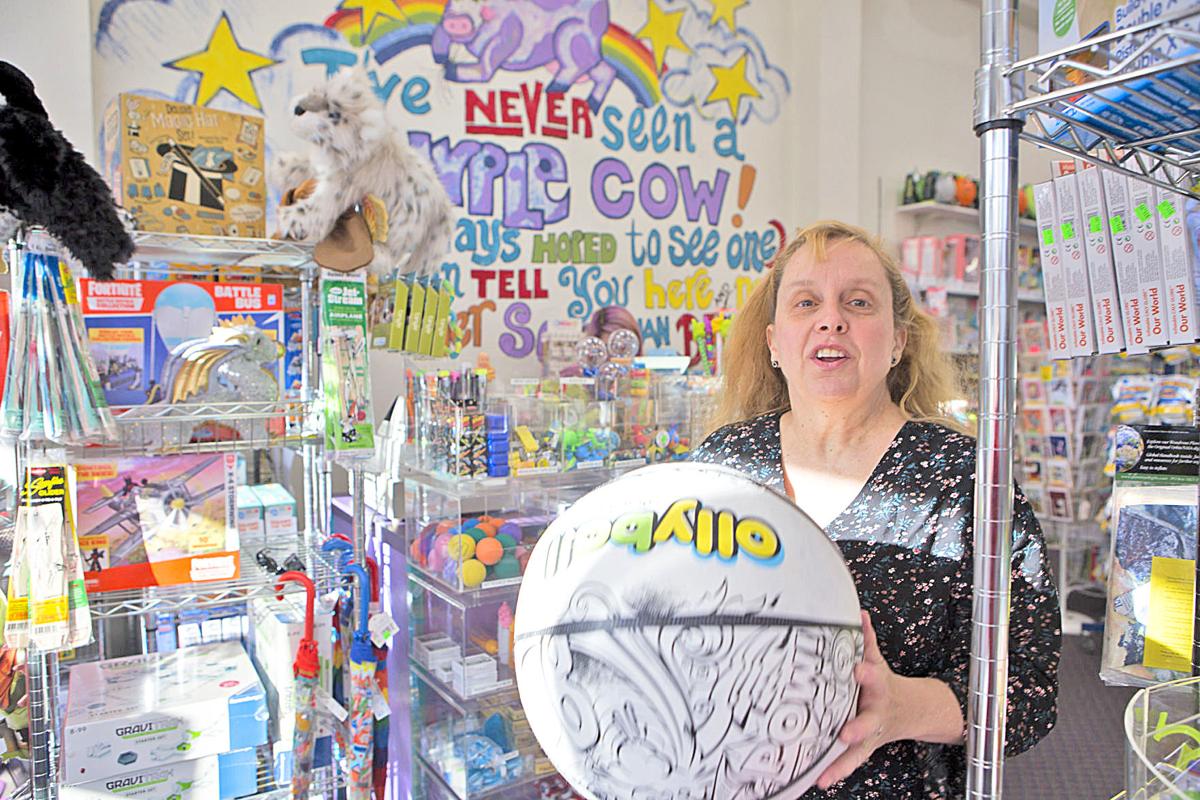 Purple Cow Toys sales associate Carrie Ank spoke about the classic, retro and and award-winning toys that distinguishes their inventory from big box stores. “We have toy lines you can’t buy at big box stores,” she said. 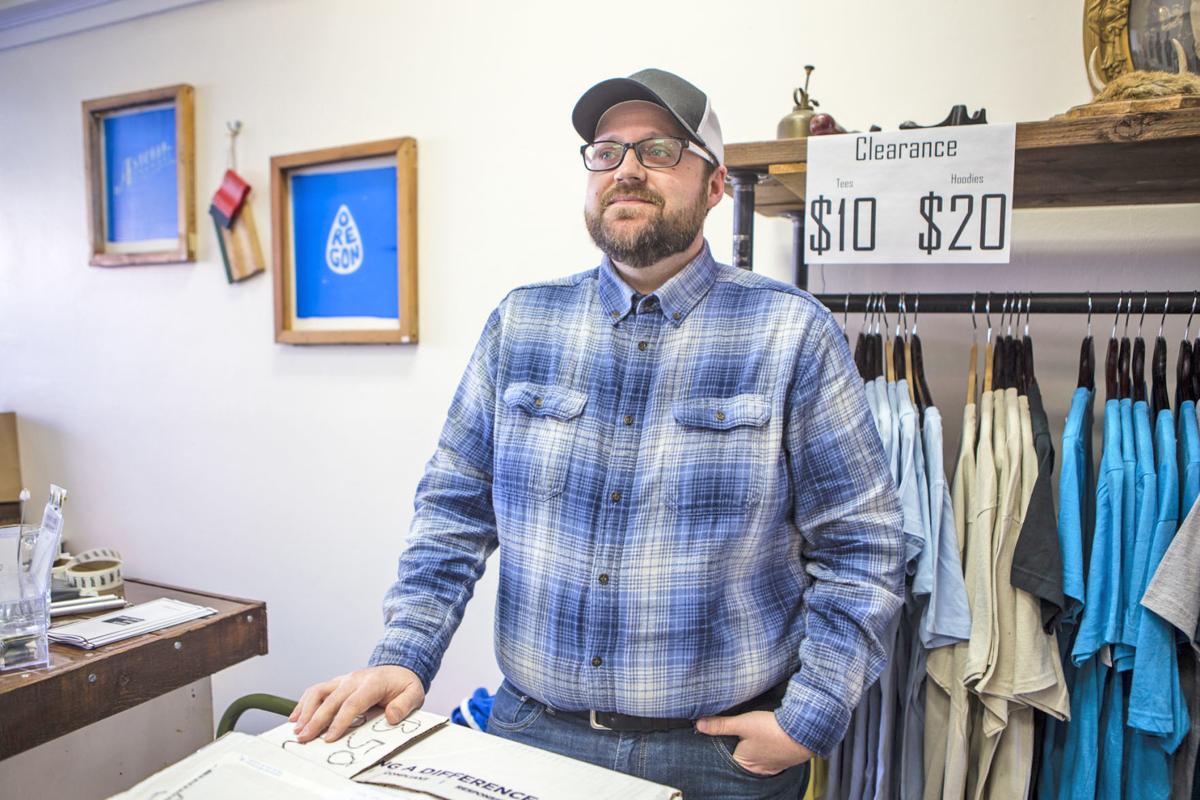 Accent Ink NW manager David Rhoadarmer said the downtown core has resisted being impacted by burgeoning Big Box stores outside Astoria, largely because each business caters to a different customer base and carries unique inventory.

Sea Gypsy Gifts owner and artist Naomi Pena poses with one of her recent picture frames created using recycled glass. “We have more than 40 local artists in here. We try to specialize in recycling as much as we can,” Pena said.

Purple Cow Toys sales associate Carrie Ank spoke about the classic, retro and and award-winning toys that distinguishes their inventory from big box stores. “We have toy lines you can’t buy at big box stores,” she said.

Accent Ink NW manager David Rhoadarmer said the downtown core has resisted being impacted by burgeoning Big Box stores outside Astoria, largely because each business caters to a different customer base and carries unique inventory.

ASTORIA — The decimation of small businesses by big box stores has been well documented.

Walmart, the world’s largest mainly brick-and-mortar retailer, is often seen as a common culprit. With more than 11,000 stores worldwide, the corporation has been tagged with the phrase ‘Walmart Effect,’ a term used to describe the subsequent closure of neighboring small businesses.

In June 2018, Walmart officially opened a 153,000-square-foot store in Warrenton, joining nearby Costco, The Home Depot and Fred Meyer.

In November, local family-owned businesses reflected on the impact of another retail giant joining the ranks in Warrenton and how smaller retailers remain competitive during the holiday sales season.

Difference is in the details

ASTORIA — When Costco opened on Ensign Lane in Warrenton in November 2009, it hurt the bottom line for a new budding flower shop on the corner of Commercial Street in Astoria.

Since then, Bloomin Crazy has rebounded and blossomed into a more expansive floral shop offering an ever-growing line of green plants, clothing and small gifts, largely due to an emphasis on quality products with a personal touch.

As a result, Walmart’s more recent arrival has had little impact, Berry said.

“Costco definitely does with their wholesale flowers. Fred Meyer and Safeway a little bit, too. The big box stores other than Walmart have definitely cut into business. But for our floral and gift boutique business, we don’t feel Walmart has been any competition at all, because we have two different sets of customers.”

Valentine’s Day is the busiest season, bringing a two-day surge in business each February. Mother’s Day is the second busiest.

“Christmas is probably third, because it goes for about two weeks,” Berry said.

ASTORIA — Curating store shelves with rare, classic and award-winning inventory has become source of pride for another Astoria business.

The store carries an extensive array of classic to contemporary toys from Brio Trains to Mad Mattr.

“Mad Mattr is extremely cool and sells a lot,” Ank said regarding the soft modeling dough akin to a Play-Doh 2.0.

Several toys on the shelves are award winners, including a lightweight, inflatable ball engineered from kite material for indoor use called the Ollyball.

“It’s used for playing ball in the house,” Ank said.

“We have a lot of stuff designed to be played during those months of sideways rain.”

“The Hearts for Hearts Dolls sell 4-to-1 over the others,” Ank said.

An entire wall is dedicated to board games, from from classics to latest releases.

“We’ve got everything from Ticket to Ride to Azule, which just came out,” Ank said.

Another section is devoted to science, technology and engineering toys.

“We’ve got a ton of robotic stuff,” Ank said. Among the favorite is the Robotikits, including one that allows hands-on step-by-step instruction for building a 4-stroke engine.

“You can build a whole engine block,” Ank said.

The puzzles and thinking toys are popular with adults.

The arrival of Walmart hasn’t had an impact, according to Ank, largely because they carry different product lines and can’t match the quality of service.

“You don’t walk in here and feel like nobody isn’t going to talk to you,” Ank said.

However, some nearby store closures have had a ripple effect for the family-owned toy store on the corner.

“What’s had a worse impact has been the closure of J.C. Penny’s. It’s just desolate down here now. Where it used to be hopping, with a music store and Penny’s. People would come for the early-bird special at Penny’s on Friday (Nov. 28),” Ank said.

But there’s a silver lining.

“We’ve outlasted Toy R Us, which I never thought would happen,” Ank said.

ASTORIA — The original Oregon ‘raindrop’ design and classic ‘Astoria, Oregon’ emblem is screen printed on shirts and emblazoned across hats, mugs and stickers.

It’s these two original designs that have remained as the backbone over the past nearly five years for Accent Ink NW, a screen printing and embroidery business at 1125 Commercial St.

“Those are the staples,” said manager David Rhoadarmer.

In spite of seasonal store sales, business has never been better, according to Rhoadarmer.

“This is our second location. Our first location is in Longview and it’s just a production shop, where we have the printing presses. Astoria is home now. I found a beautiful home and I love it here.”

Rhoadarmer said the downtown core has resisted burgeoning big box stores outside Astoria, largely because each caters to a unique customer base and carries unique inventory.

“As far as the retail downtown area, I think everyone has such a niche that people are attracted to it. It hasn’t infringed much on our retail,” he said.

Each design in the store is made by Northwest artists, often Rhoadarmer or one of three business partners.

“It’s all local and one-of-a-kind. You won’t find it anywhere else.”

ASTORIA — Dozens of local artists have work displayed in one downtown Astoria business that specializes in bringing new beauty to the broken and discarded.

Custom-made recycled glass windows are among their most popular specialty items.

“All of it is recycled,” said owner and artist Naomi Pena. “We have more than 40 local artists in here. We try to specialize in recycling as much as we can.”

“Every year we’re doing a little bit better than that last year, so I don’t feel like Walmart affected us. But our stuff is way different — it’s not from China,” she said.

WARRENTON — Despite being located less than two miles away from Walmart, one family-owned store has felt little pressure from the retail giant’s presence.

“None,” said J&S Appliance & Home Furniture general manager Brian Tucker pointedly after being asked about the impact of having a Walmart so close.

“They don’t really have an effect on our business because we do totally different things than what they sell. They sell low-end furniture and we don’t sell anything like that,” he said.

Tucker conceded that other one big box store cut business temporarily, but it eventually bounced back.

“The Home Depot did for about a year, but people realized the difference in customer service between a big box store and a little, local store. I think it helped our business because people actually realized the value they got here compared to Home Depot.”