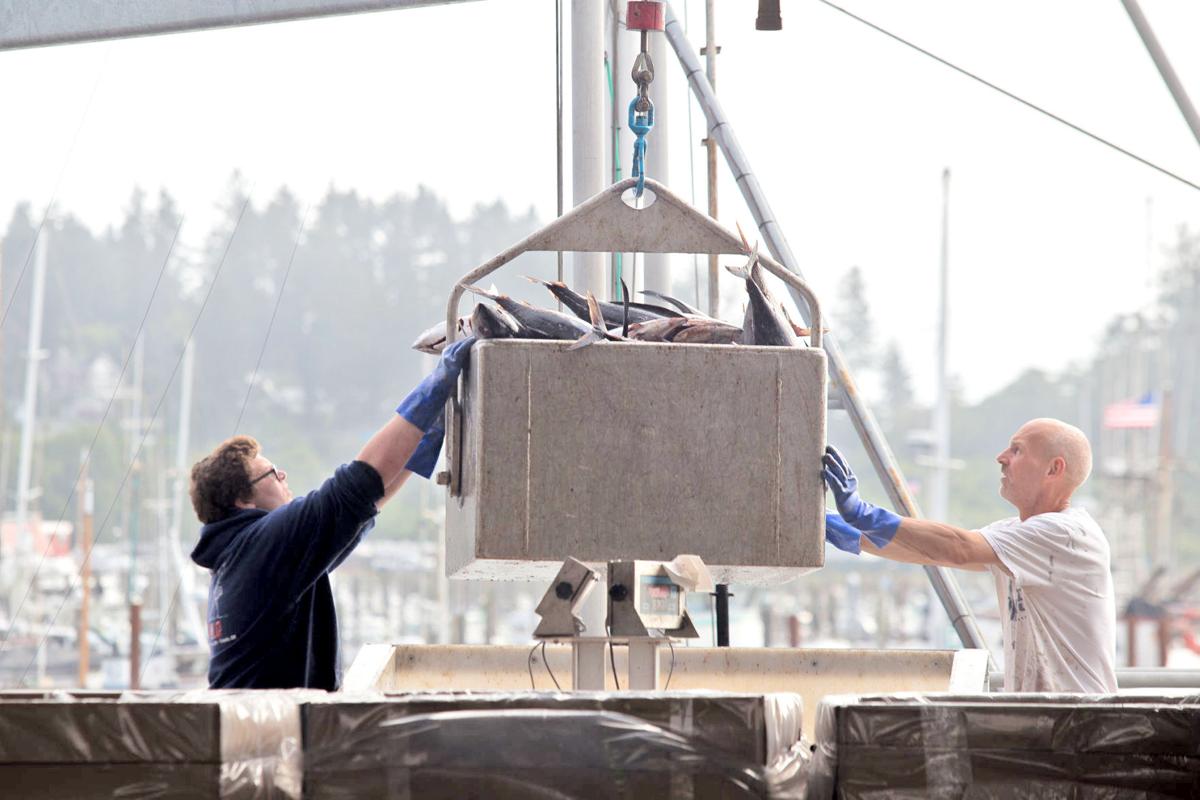 Crew at Ilwaco Landing unload albacore tuna Aug. 20 in Ilwaco. Since 2015, commercial albacore catch has fallen each season, from a high 25 million pounds in 2015 to less than 7 million pounds so far this season. 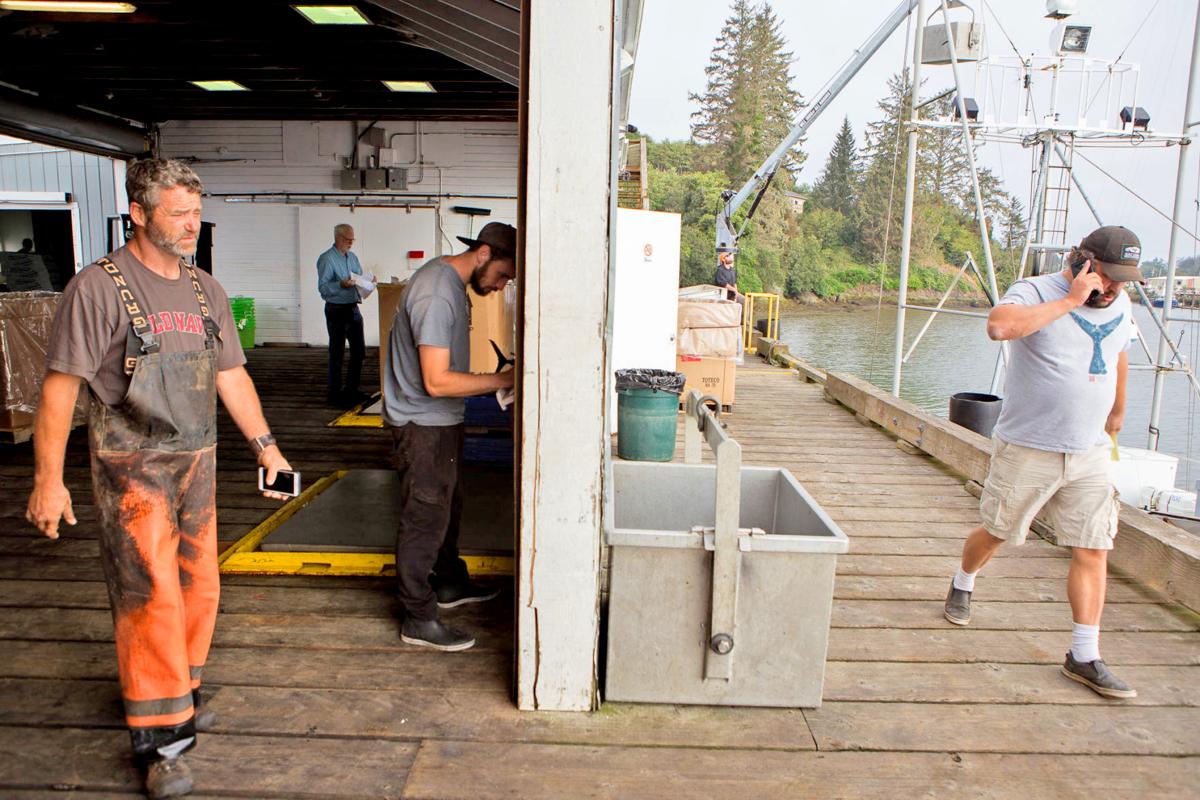 Commercial albacore fisherman Patrick Roelle, left, and Ilwaco Landing Fishermen co-owner Mike Shirley, right, walk the dock at Ilwaco Landing in August. “We’re grateful to have places like this,” said Roelle, who explained that having a facility to offload near fishing grounds is crucial to delivering the freshest catch possible.

Crew at Ilwaco Landing sort and weigh albacore tuna Aug. 20 in Ilwaco. Since August, a time when the majority of the albacore tuna are caught in a given season, commercial catch has flatlined.

PACIFIC NORTHWEST — For a fourth consecutive year, the news hasn’t been good for Oregon and Washington commercial tuna fisherman.

According to official figures from the Pacific Fisheries Information Network (PacFIN), commercial landings are down sharply from 2018, dropping significantly from the 10-year average in both states.

“The catch started fairly early, about the middle of June, but there wasn’t much,” said Western Fishboat Owners Association Executive Director Wayne Heikkila, who monitors the tuna fishing season coastwide from California to Washington as part of non-profit group representing 400 albacore fishermen on the West Coast.

“Only a few guys found fish the first part of July and they were out further than normal, about 200 to 300 miles out,” Heikkila said. “It looked like that was going to set up as the area then all of a sudden it looked like everything pushed into the beach. The water got really warm offshore. Since mid-July until now it’s [the cooler water] been more of a narrow band from Northern California up to Vancouver Island.”

Since August, a time when the majority of the albacore tuna are caught in a given season, commercial catch has flat lined, according to PacFIN catch figures.

'I think this warm water is doing some strange things and we just don’t quite know good or bad.'

Recreational tuna fishermen venturing out into the Pacific from the mouth of the Columbia have done comparatively well this season, thanks in part to ocean conditions bringing albacore closer to shore.

“It’s been kind of unusual,” said Heikkila, who believes ocean conditions could be causing the catch anomalies.

“I think this warm water is doing some strange things and we just don’t quite know good or bad. With all those other species showing up this high in Washington and Oregon, you really don’t see that. I’ve seen it in California during years when we’ve had El Niños, sometimes you catch some different species off central California, but there’s been a lot of different species around this year,” he said.

The warm water is impacting fisheries elsewhere, too.

“The water offshore is 70 degrees and [if you look at water charts] it goes way up toward Alaska,” Heikkila said.

“Alaska is having real problems with hot water this year. There seems to be a narrower band of cooler water anywhere from 30 to 100 miles off the beach — the area where we normally catch fish in the summer — and it seems there a lot of hot water offshore. I can’t really say I can compare this year to any so far. It’s just a little bit different.”

The freshest catch commands the highest price, making the act of chilling albacore and maintaining a specific core temperature both an art and a science — and essential to preserving the flavor of the fish in the process.

“The Chinese like that fat content frozen in,” said David Moore, dock supervisor at Ilwaco Landing. “You’ll see some fish with a yellow stripe on the side, that means it wasn’t frozen fast enough, the fat is starting to seep out.”

There are four categories to cooling fish. These include ice fish, which must meet a 30-degree core requirement; fresh fish at 32 degrees; brine frozen at -9; and blast frozen at -30.

“Brine is the fastest way of getting them cold,” Moore said. “Within 10 minutes they’re hard as a rock.”

The slim albacore landings locally are competing with cheaper imports from China.

“The blast-frozen, sushi markets that have traditionally gone through Canadian buyers are having problems with cheap imports from China,” Heikkila said. “We started seeing that the last few years and it’s really had an effect on ex-vessel pricing. It’s taken the frozen loin prices down almost in half in the last years.”

The fresh market seems to be doing better than frozen overall, according to Heikkila.

“The blast market hasn’t been that great. It varies hour to hour. It should be higher than the brined but it isn’t. Whether that straightens out or not we’ll see. It depends on the demand,” he said.