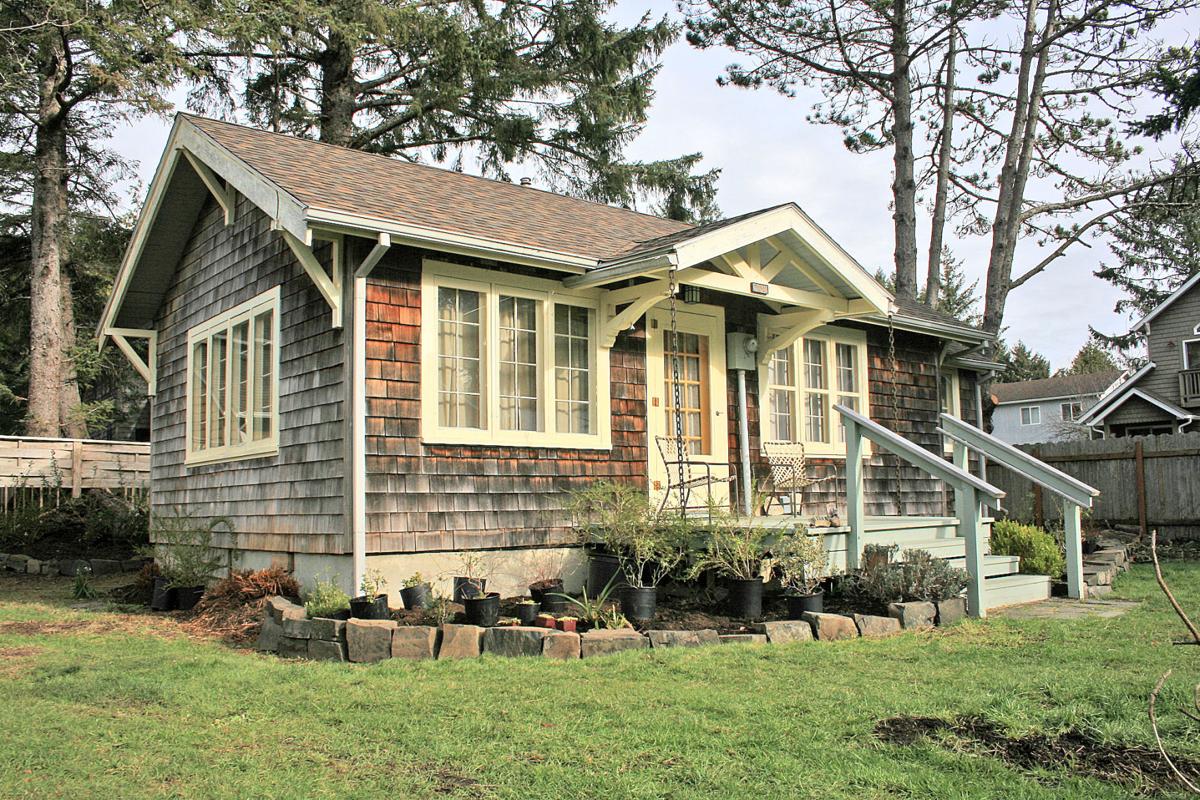 Saved from destruction, the Walker cottage was moved to a new location in 1999. 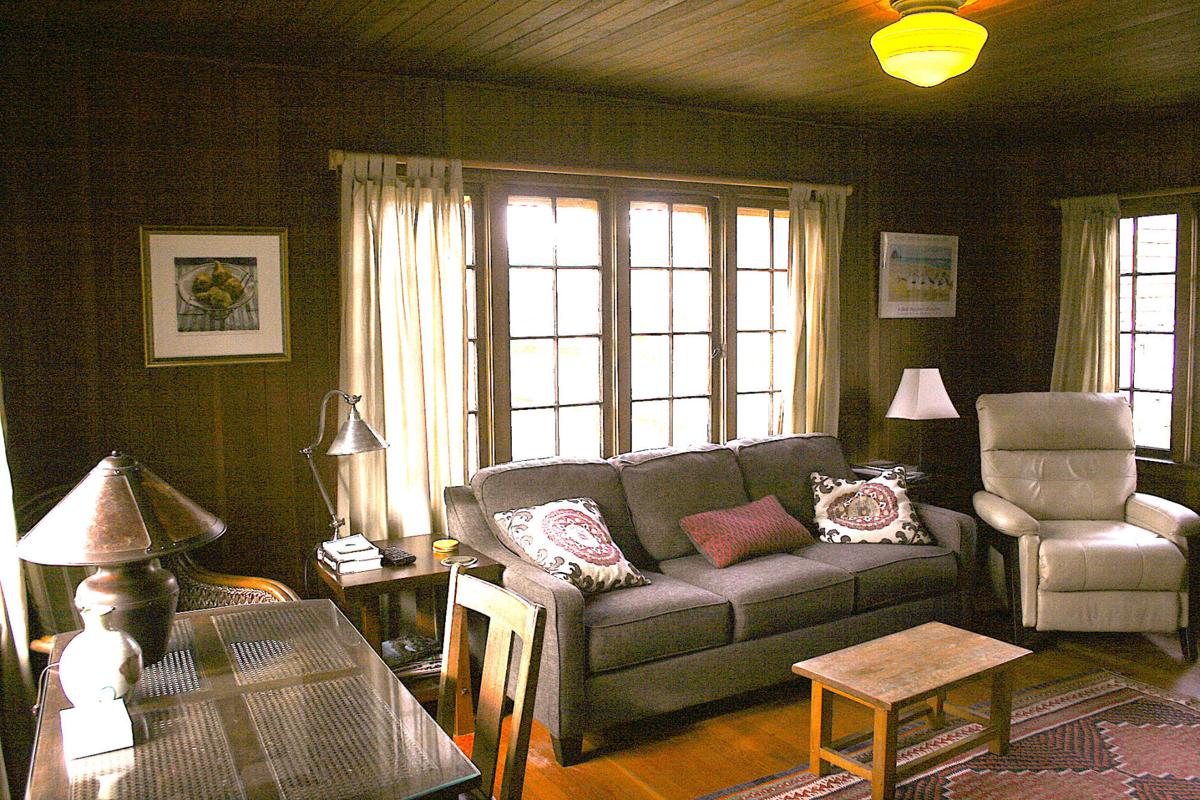 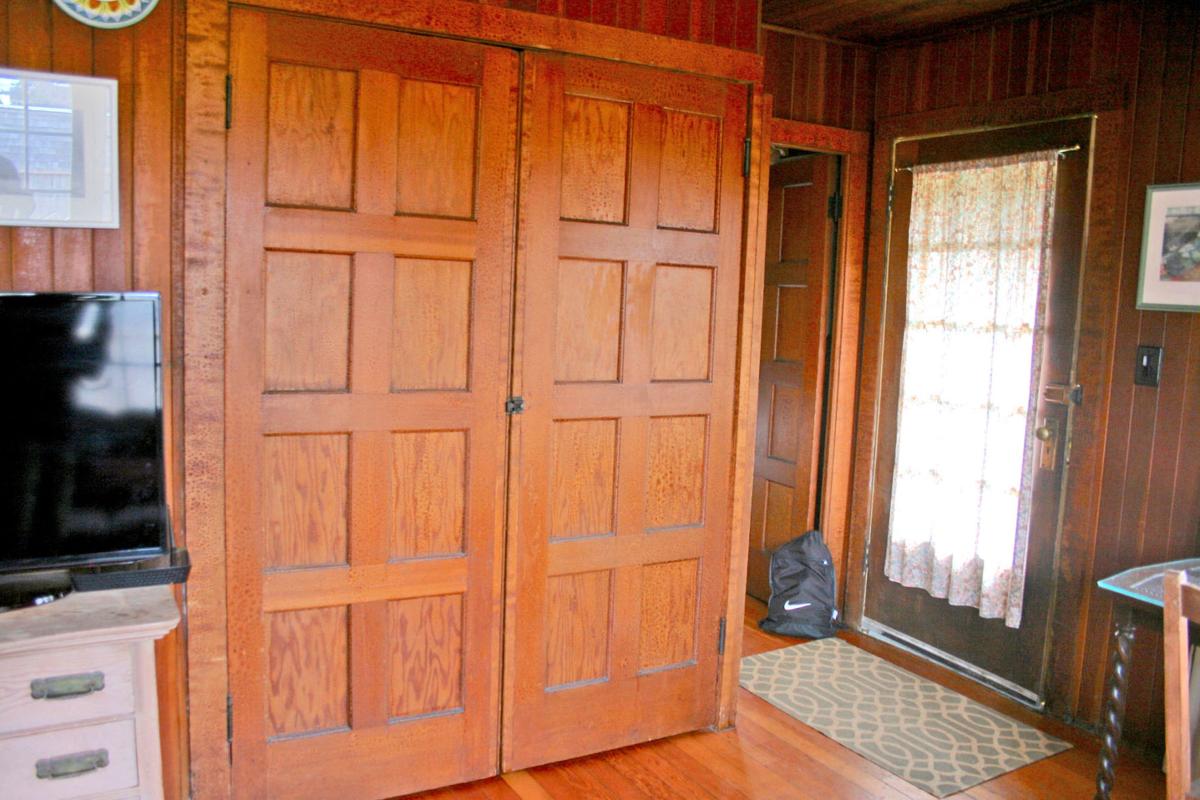 These wood paneled doors once obscured a murphy bed. 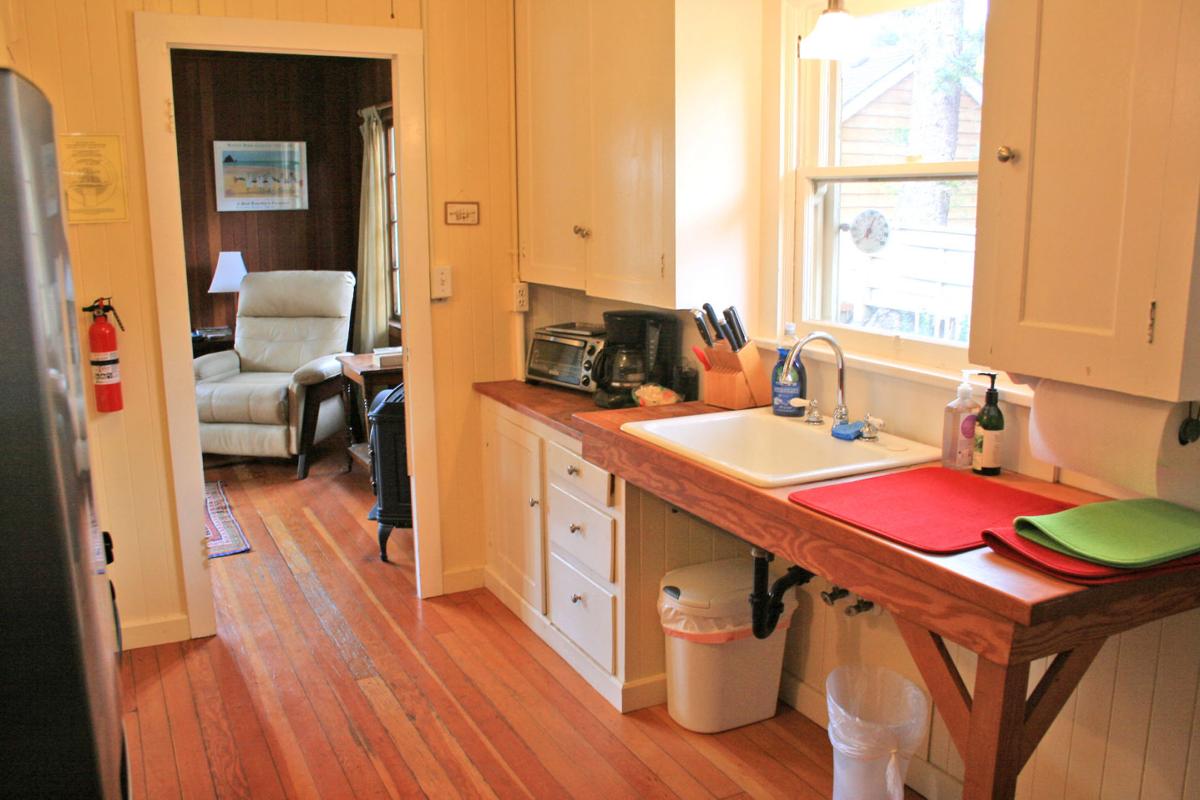 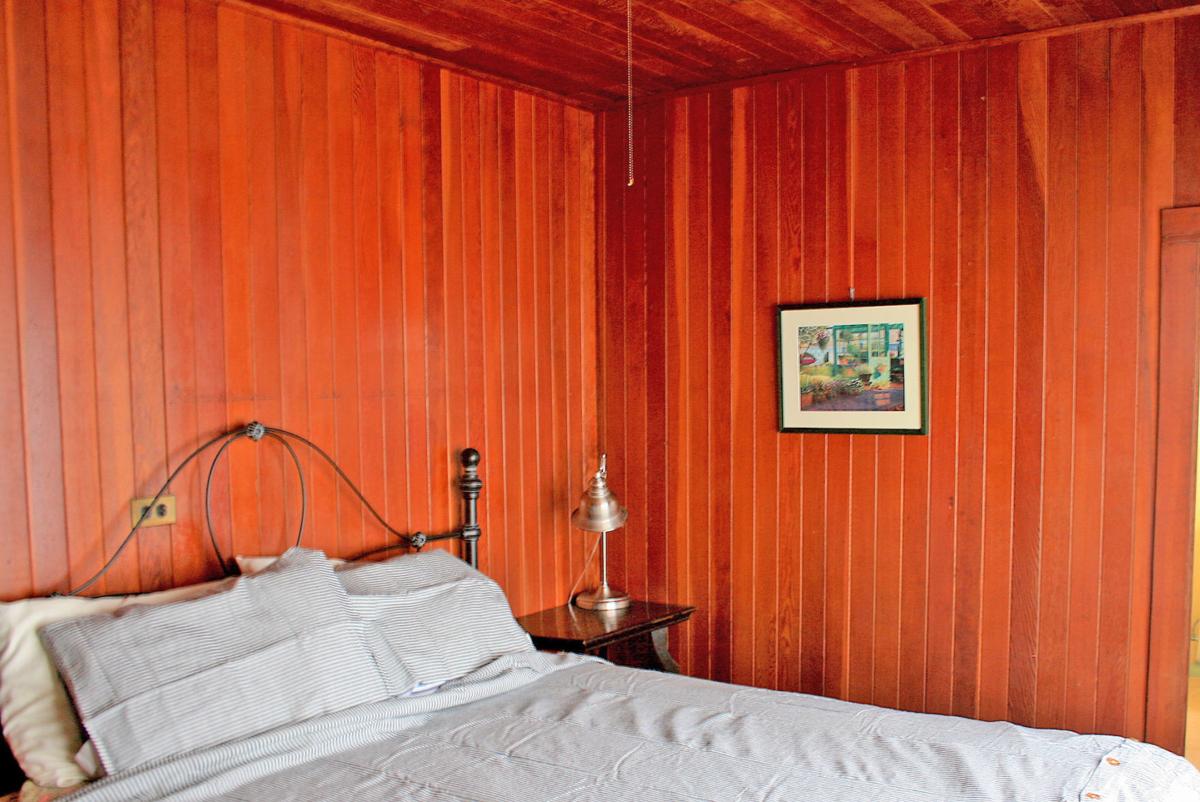 The bedroom walls and ceiling are wrapped in v-groove fir. 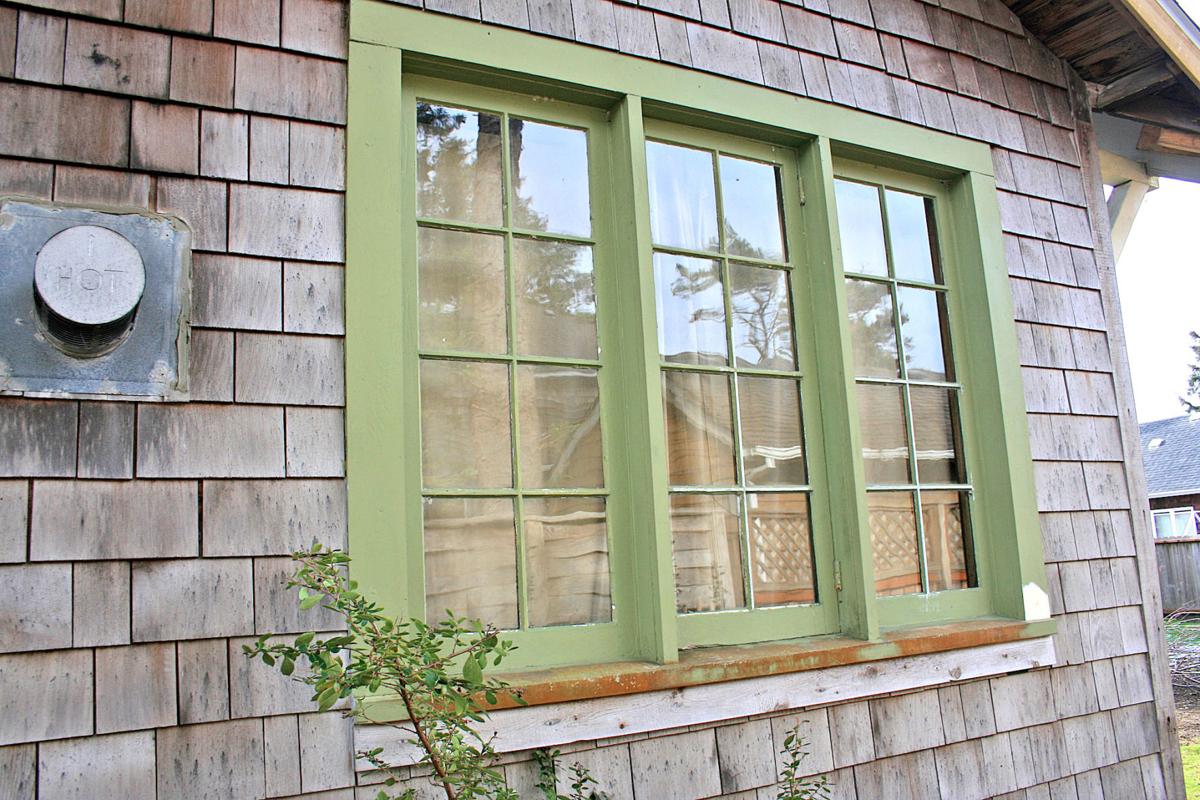 This three-part window was returned to its original location. 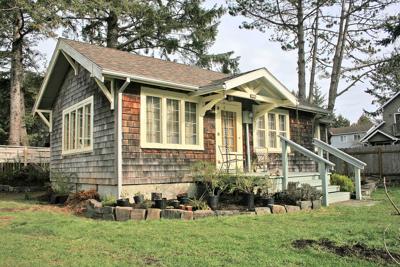 CANNON BEACH — “I was riding my bike down Jefferson Street when I saw people pulling furniture and mattresses out of the house,” recalled Mike Morgan, city planning and former mayor of Cannon Beach. “I asked them what they were going to do with the house. They said, ‘We’re going to have the fire department burn it.’”

Morgan owned an empty lot four blocks away. “Why don’t I buy it from you and move it?” he asked. The cottage’s owner, Betty Walker, was intrigued. Morgan offered one dollar for the building. Walker counter offered, “How about five?” Morgan agreed.

In 1999, Morgan moved the 1920s cottage down Jefferson, up Hemlock and around the corner to E. Jackson Street. “The Walkers were thrilled that it was being saved after all,” said Morgan. He set the building down near the back of his property on a new foundation. Then, he installed utilities.

A 10’ x 10’ addition — once tacked to the back of the house — was removed prior to the move. Rather than rebuilding it, Morgan maintained the building’s original form. He returned a three-part, casement window (used in the addition) to its original location where the addition was previously constructed. Next, he replaced all the wood shingles on the house and let them weather naturally.

“The interior is essentially as we found it,” he said. Original, v-groove, fir wraps the walls and ceilings. Wood in the living room and bedroom remains unpainted. The paneled doors of a former murphy bed, now a front-room closet, show signs of alligatoring from old shellac. “I was going to re-finish the wood until my sense caught up with me,” he explained. And, this reflects his basic attitude to let the building and its age speak for itself.

Morgan kept the original kitchen cabinetry. Modifications to the room were small: he raised the sink to a more convenient working height; and he installed period appropriate lighting from Schoolhouse Electric in Portland.

The bathroom needed to be remodeled, however. He installed a new sink, shower and toilet. “We tried to be sympathetic within the period,” he said.

Morgan and his wife, Beth Holland, rented the cottage to friends and employees for 17 years. Now, the cottage is a vacation rental.

“We bought it with the idea of someday using it as an accessory dwelling unit,” explained Morgan. When he and Holland are too old to live in their current multi-level house, they will consider constructing a single-level house on the front half of the site. A caregiver could live in the cottage.

Current code allows a 3,000-square-foot building footprint on the lot. The cottage is 600 square feet. Therefore, Morgan could legally construct a 2,400-square-foot house. Instead, he will construct something between 800 to 1,000 square feet. He strongly believes in maintaining the neighborhood’s modestly sized, historic character.

Morgan estimates more than half of the city’s historic cottages are gone. Many are replaced by 3,000-square-foot houses. “People who don’t have an interest in old buildings just see them as funky old buildings,” he said. “They are not hesitant about crunching them.” Morgan noted that even though original cottages are disappearing, the city has not developed a historic preservation ordinance to protect them.

Furthermore, while Cannon Beach has “fairly strict” design review standards, those standards do not apply to single-family dwellings. “Some new houses are inappropriate,” he continued. “They cover them with shingles and craftsman details, but (the houses) are too large.”

Retaining the cottages is “an effort to keep some of the vestiges of history in town.”