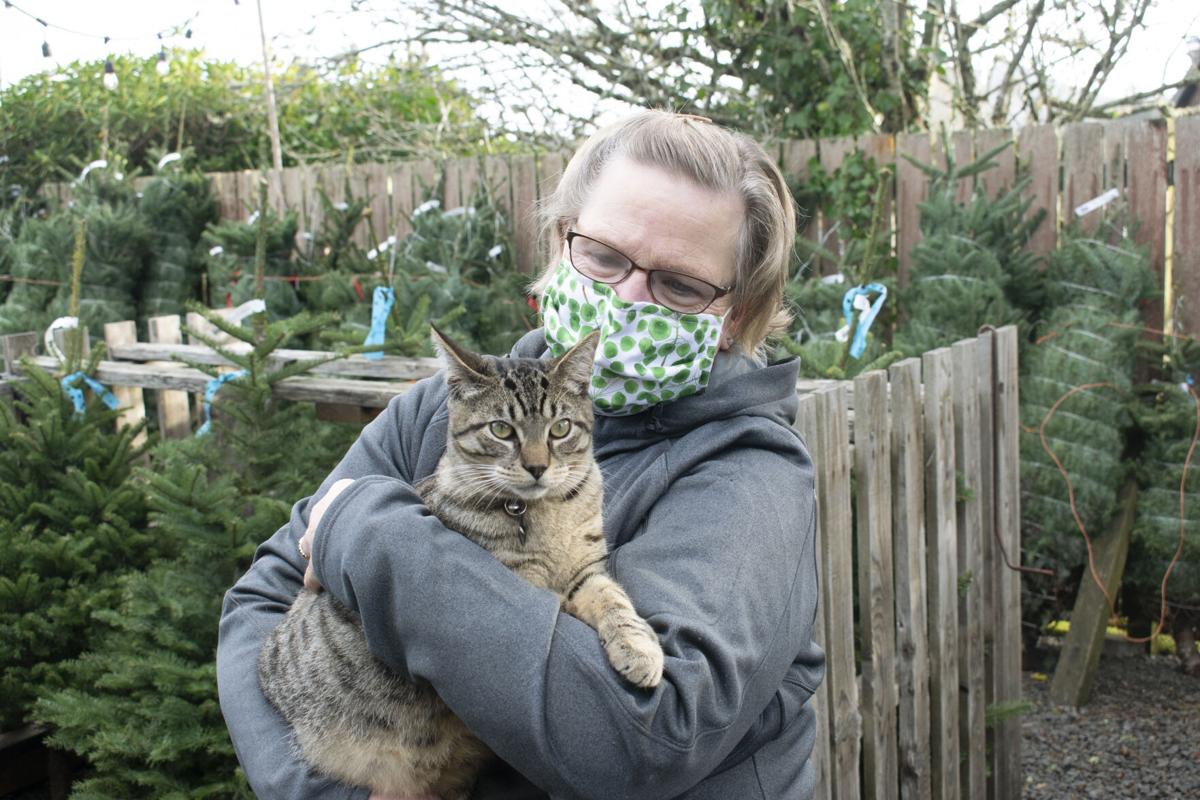 Ann Acton, manager of Dennis’ 7 Dees Garden Center in Seaside, holds one of the store’s cats, Basil, in the Christmas tree section. 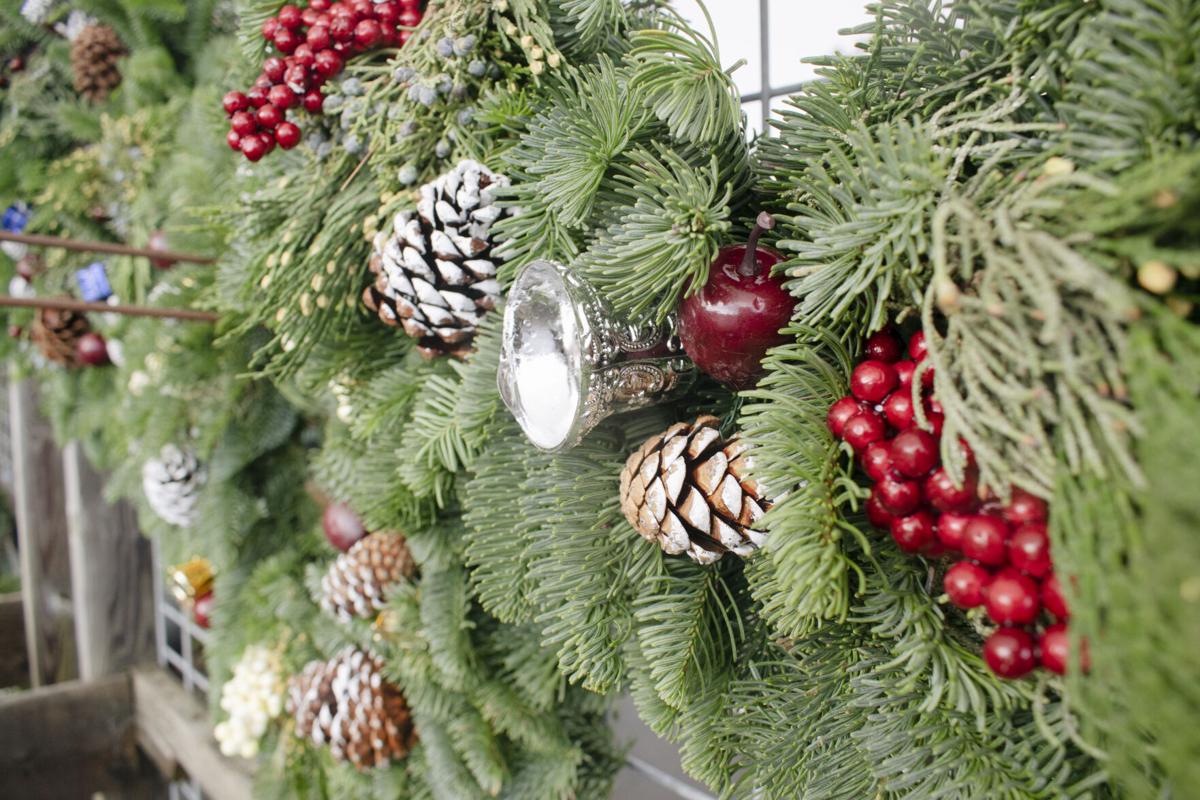 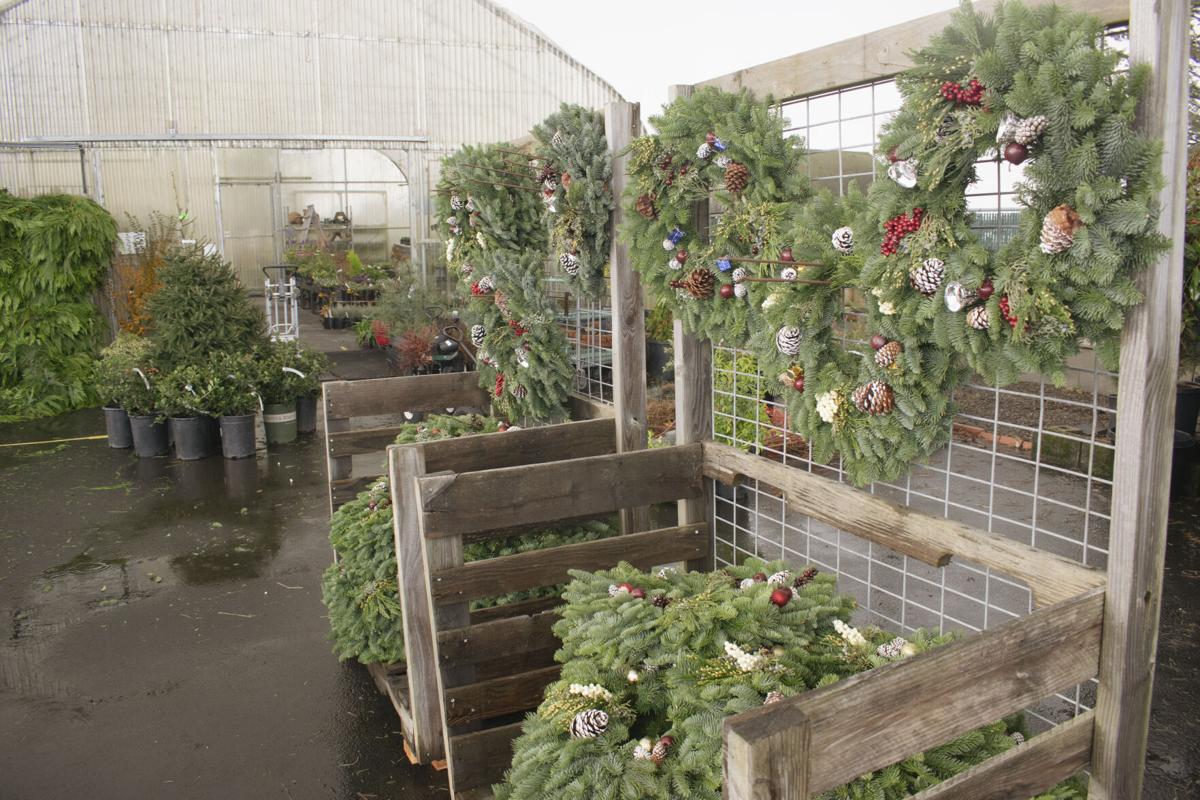 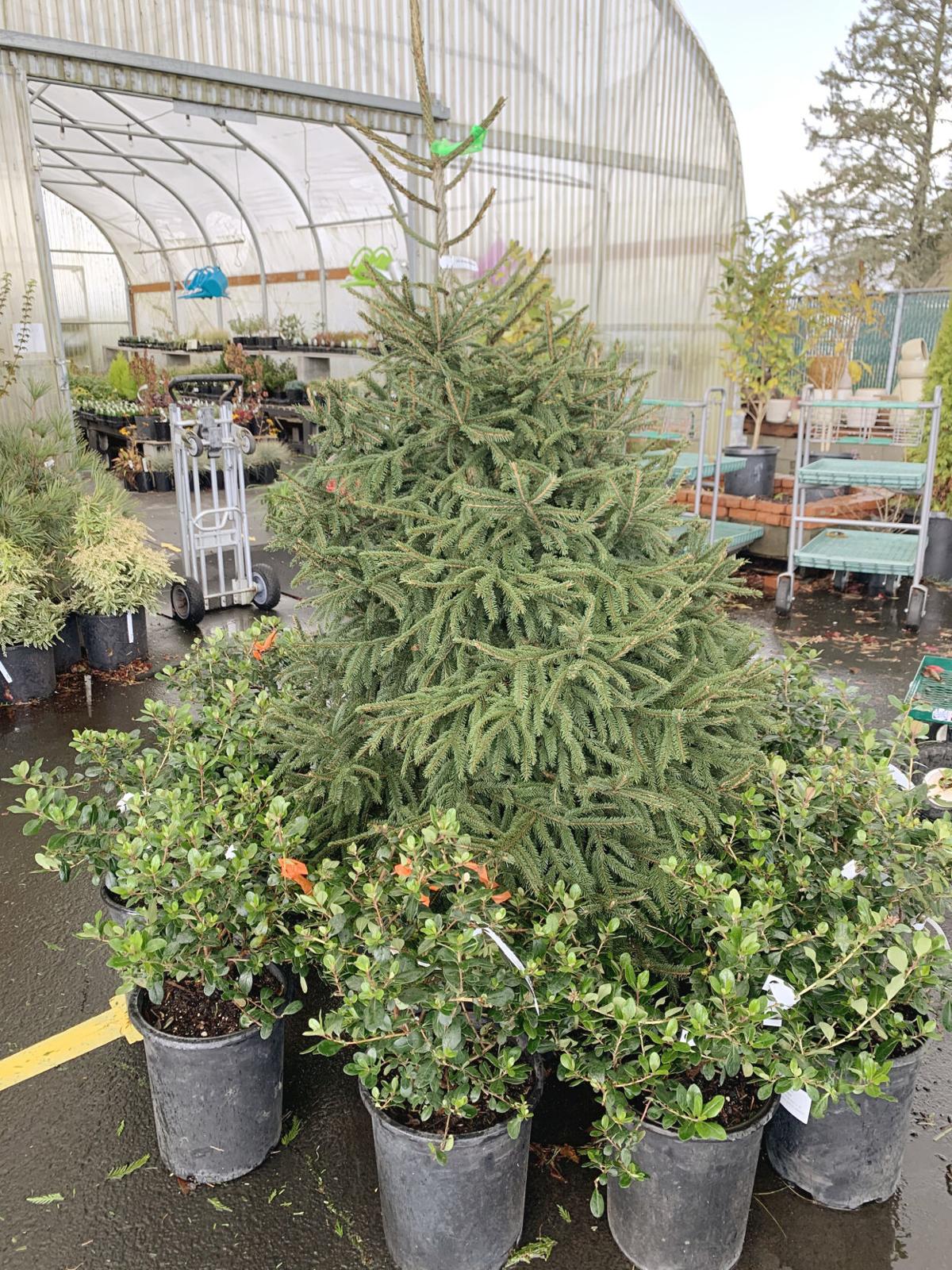 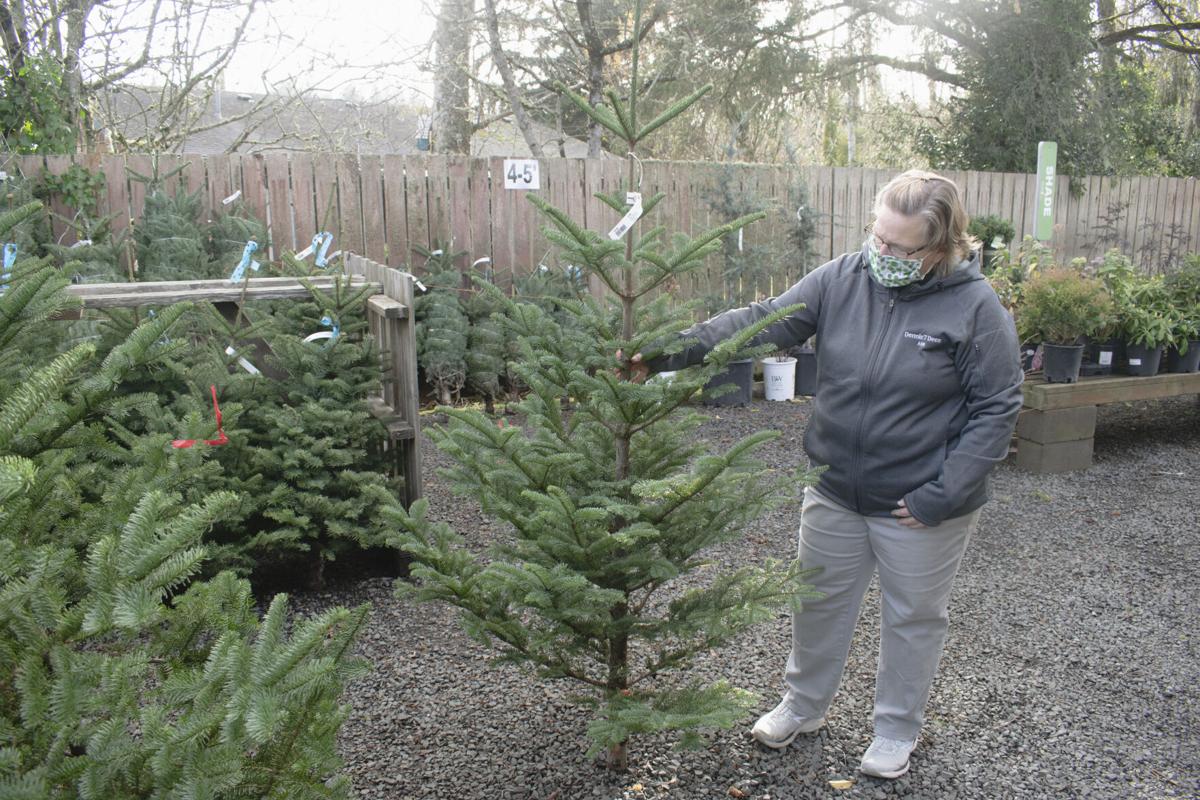 Ann Acton, manager of Dennis’ 7 Dees Garden Center in Seaside, shows an example of a natural tree for sale. 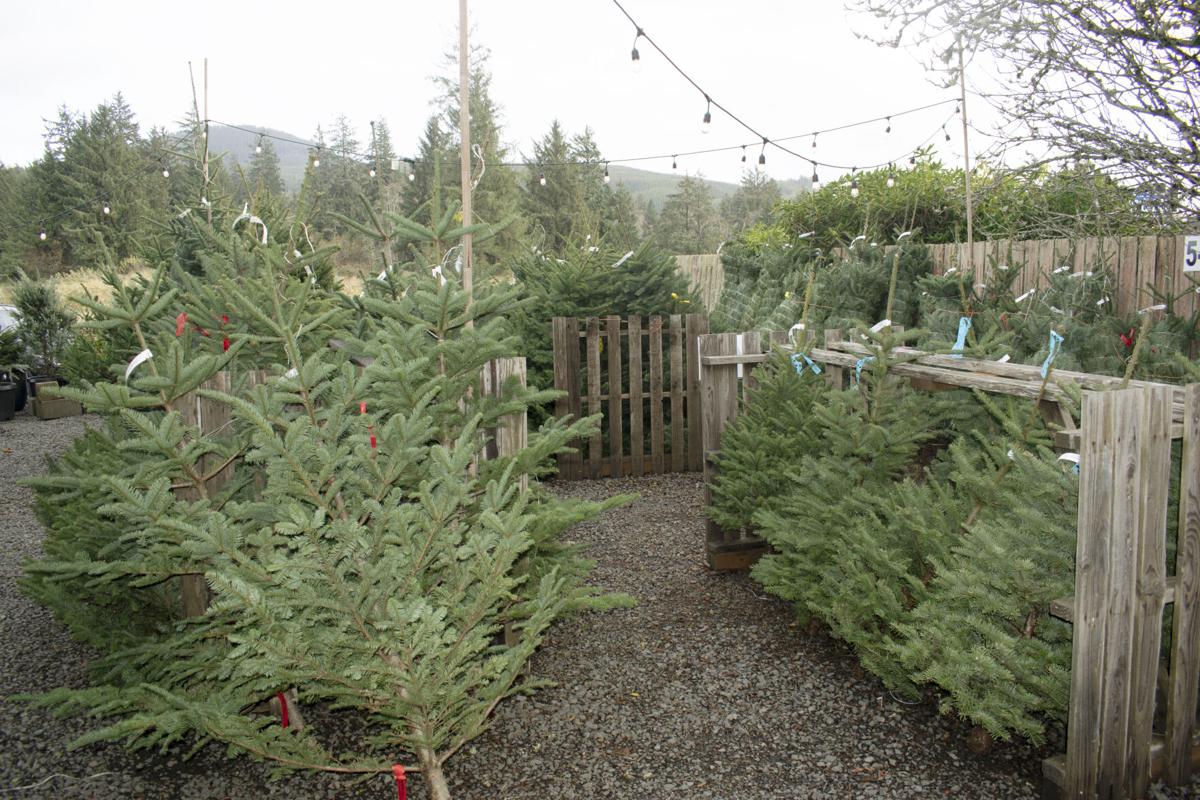 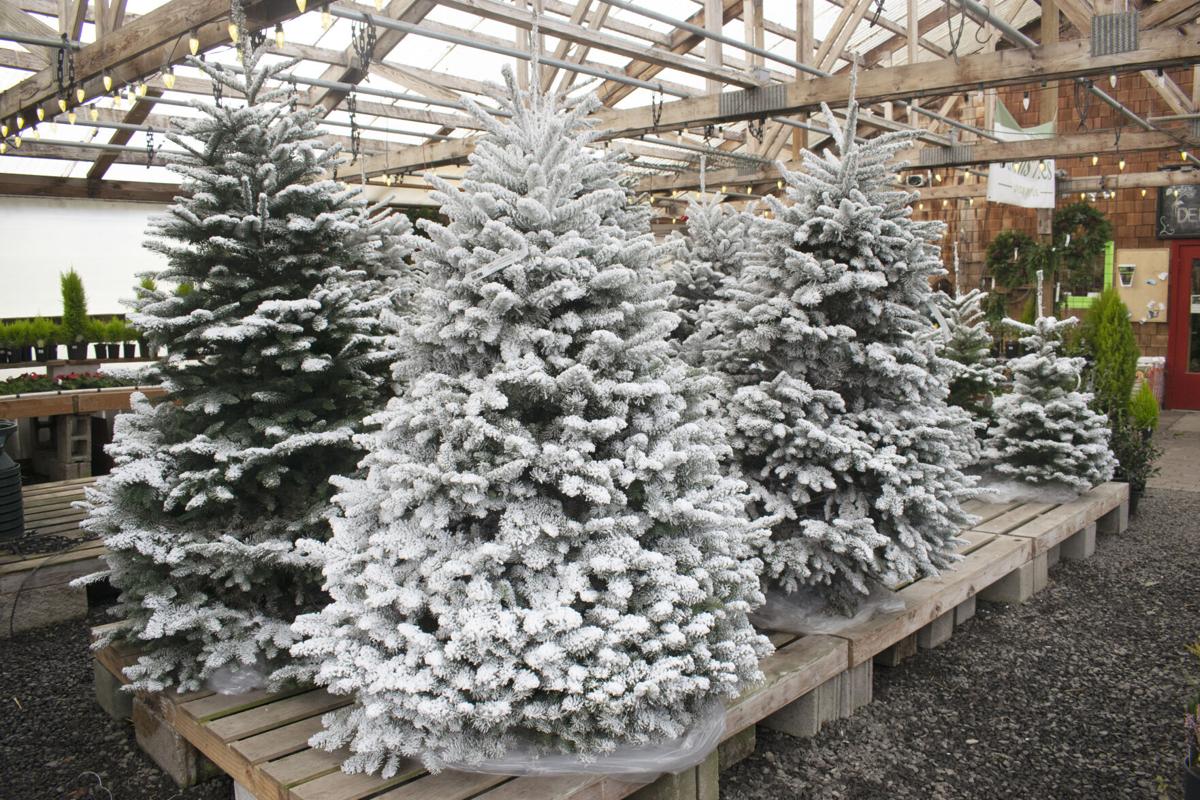 Flocked trees are preserved and already put in stands so they don’t need water. 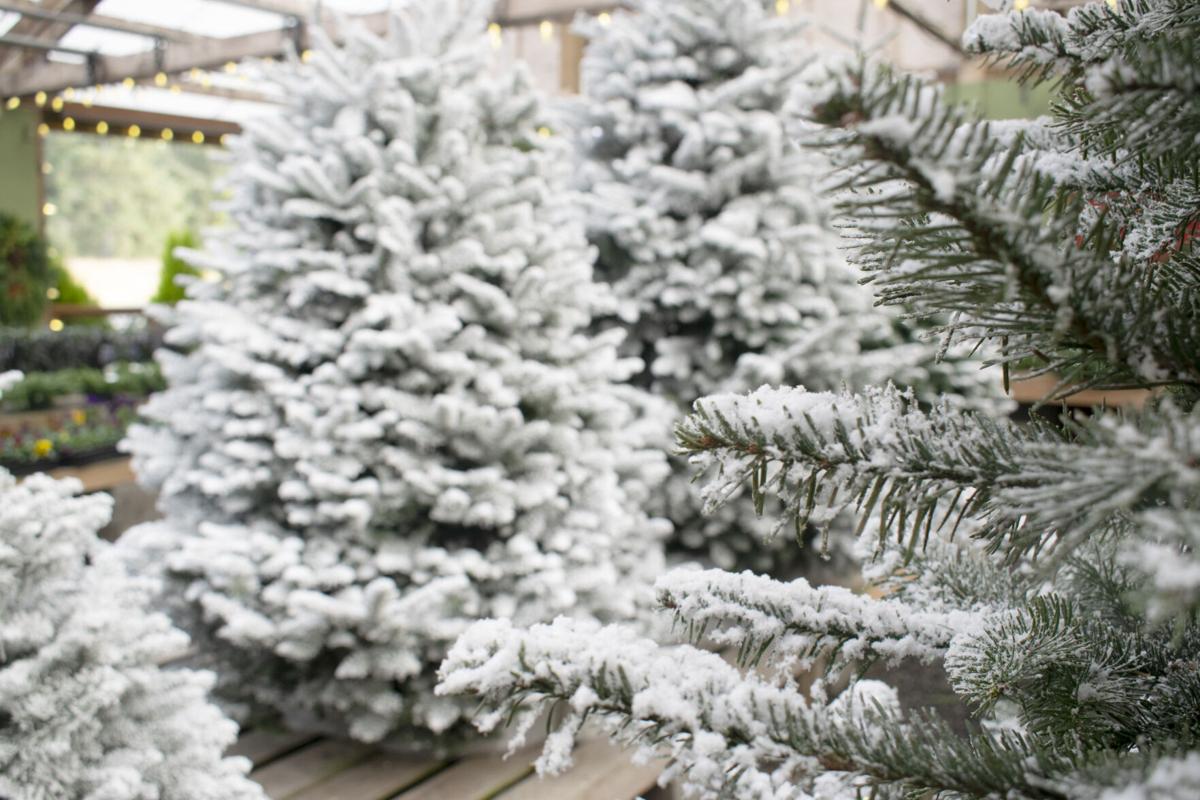 Dennis’ 7 Dees Garden & Farm Center does its own flocking of trees in Vancouver, Washington using a spray hose and a turn table.

Ann Acton, manager of Dennis’ 7 Dees Garden Center in Seaside, holds one of the store’s cats, Basil, in the Christmas tree section.

Ann Acton, manager of Dennis’ 7 Dees Garden Center in Seaside, shows an example of a natural tree for sale.

Flocked trees are preserved and already put in stands so they don’t need water.

Dennis’ 7 Dees Garden & Farm Center does its own flocking of trees in Vancouver, Washington using a spray hose and a turn table.

It’s the time of year when local garden stores are stocked with freshly cut fir trees, garlands and wreaths.

Brim’s Farm & Garden in Astoria, the Planter Box in Long Beach, Washington and Dennis’ 7 Dees Garden Center in Seaside all have a variety of cut Christmas trees and potted trees to choose from.

Brim’s and Dennis’ 7 Dees also sell flocked trees, or trees that have been made to look like they’re covered in snow. The trees are put on a turn table and sprayed with a white powdery substance that preserves the trees so customers don’t need to give them water.

“It’s an art and a science,” said Ann Acton, manager of Dennis’ 7 Dees in Seaside.

Jason Brim, manager of Brim’s Farm & Garden, said his store usually flocks about 40 or 50 of the approximately 300 trees he sells each year.

Brim’s started offering living trees about 25 years ago and then got into selling cut trees as well.

“In years past in this area there used to be two or three places that did trees,” Brim said. But now, he gets trees from wholesale growers in the Willamette Valley, and in the last few years he’s worked with a grower from Banks.

“We will carry cut trees until we sell out, and we usually make two trips to get new trees,” Brim said. “We stop bringing more in in mid-December but we usually have them until Christmas, and we have a few fresh trees left over after Christmas.”

The potted fresh trees include conifers, spruce, cedars and different types of pines that can be brought inside and decorated for up to 10 days before the customer brings them outside to plant in their yard or keep in the pot.

“In August or September they’ll start looking at where to find the best deals for the best trees at the right time,” Acton said.

This year for the company, that place was Helmig Tree Farm in Molalla. The manager at the Cedar Hills location went out to the farm and personally tagged the trees that would go to Dennis’ 7 Dees.

Now, the Seaside store has noble firs in a range of heights for customers to peruse and choose.

“Christmas is a special time of year and we want to be able to make people happy,” Acton said. “The other day we were unloading the trees and before we were even done a father and son had picked out a tree.”

The garden center has made some adjustments due to coronavirus restrictions. People can order trees online for curbside pickup. The garden center’s educator made a video to teach customers how to make their own wreaths at home, and the store has wreath kits available with all the materials needed.

Acton said she also noticed more customers have come in asking about Christmas trees and wreaths earlier than usual this year.

“We’ve had people come in several weeks ago asking when we would get stuff in,” Acton said in November. “Since March people have been home so they want to beautify their home and yard and we’re trying to keep up with that demand.”

Teresa Millner, co-owner of the Planter Box, said her store has sold Christmas trees every year since it opened in 1971.

“There have been up years and down years for being able to purchase Christmas trees,” Millner said. The Planter Box’s tree suppliers have changed over time, as some have sold their farms, some have closed and others have been affected by wildfires. “With it changing over the years we’ve ended up having to go further and further away to get our trees.”

In past years, Millner would volunteer to sell Christmas trees with the Kiwanis Club of Ilwaco-Long Beach, before that organization dissolved.

“It was so fun to do that because everybody was in good spirits when we were down there volunteering,” Millner said.

She said the trees would come from a farm in Deep River, Washington, which is no longer there.

“It was very cheerful and people were very giving when they were picking up their trees,” Millner said. “Volunteering during Christmas time is a fun thing to do.”