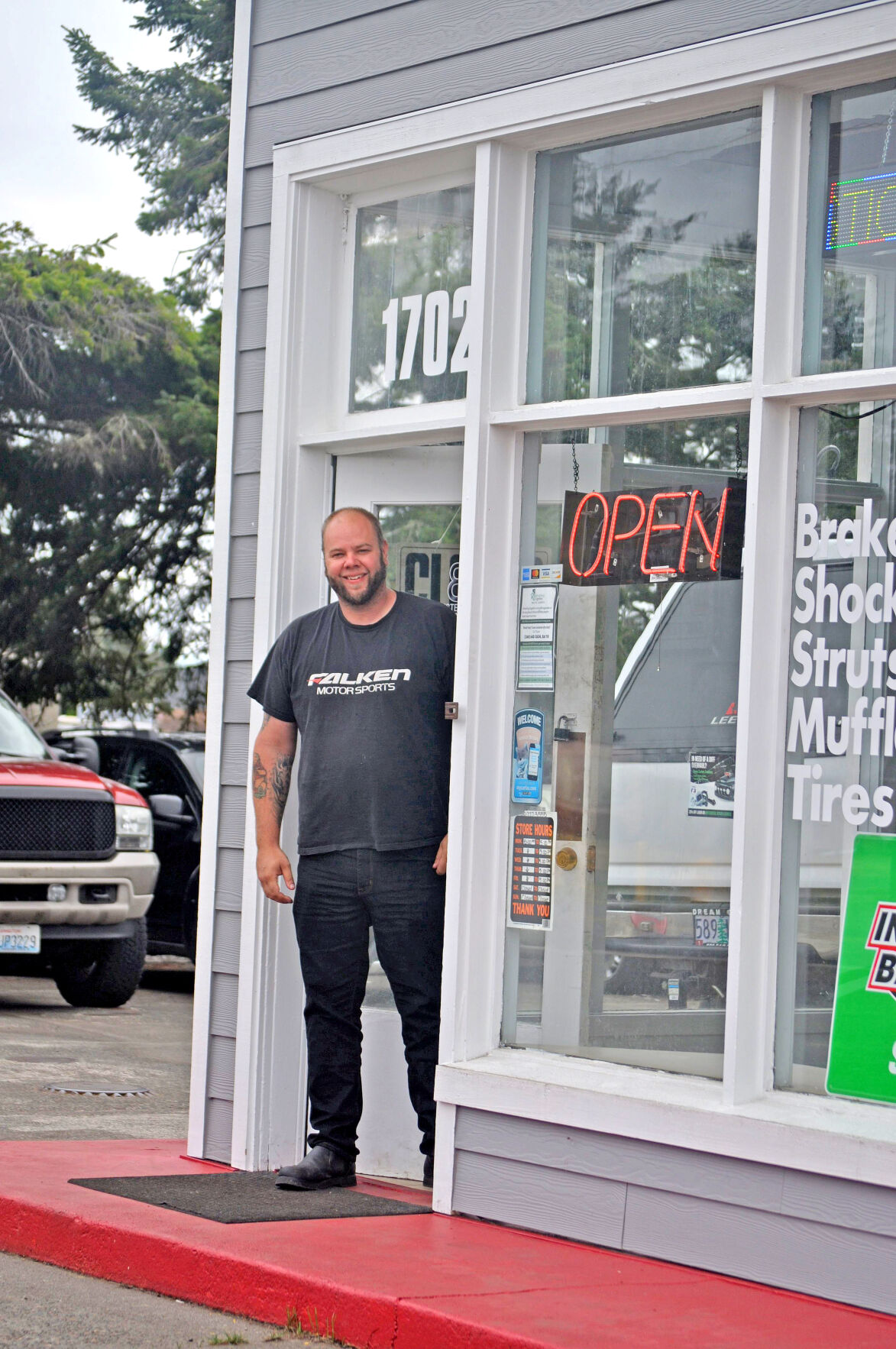 Barry Coleman stands in the doorway of his Busted Knuckle Garage on Bay Avenue in Ocean Park. The 1941 building has a whole new look. So does Coleman, after surviving cancer, when a 60-pound tumor was removed from his stomach. 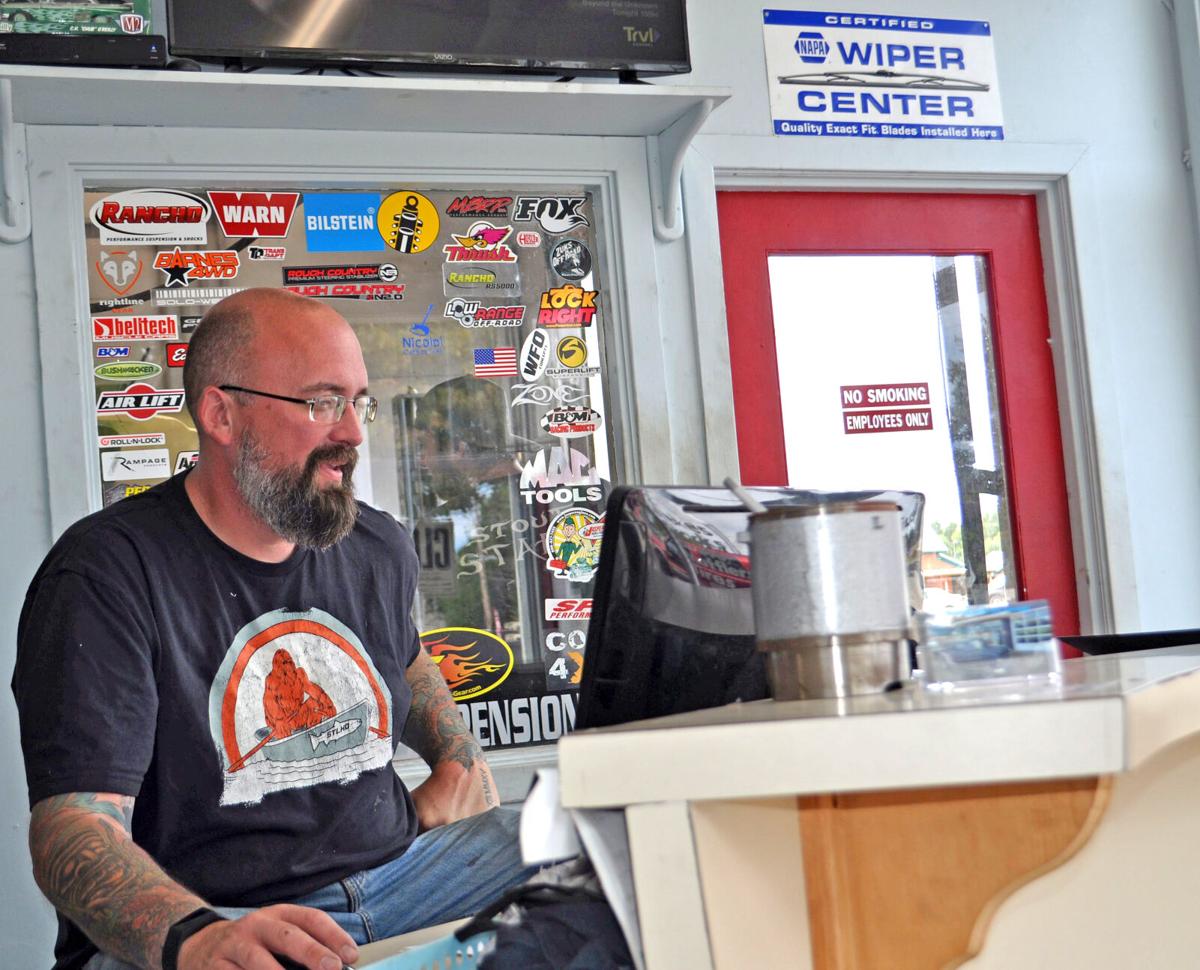 Daniel Smith came to Busted Knuckle from Hill's, to work as manager, soon before Coleman went into the hospital for 40 days. 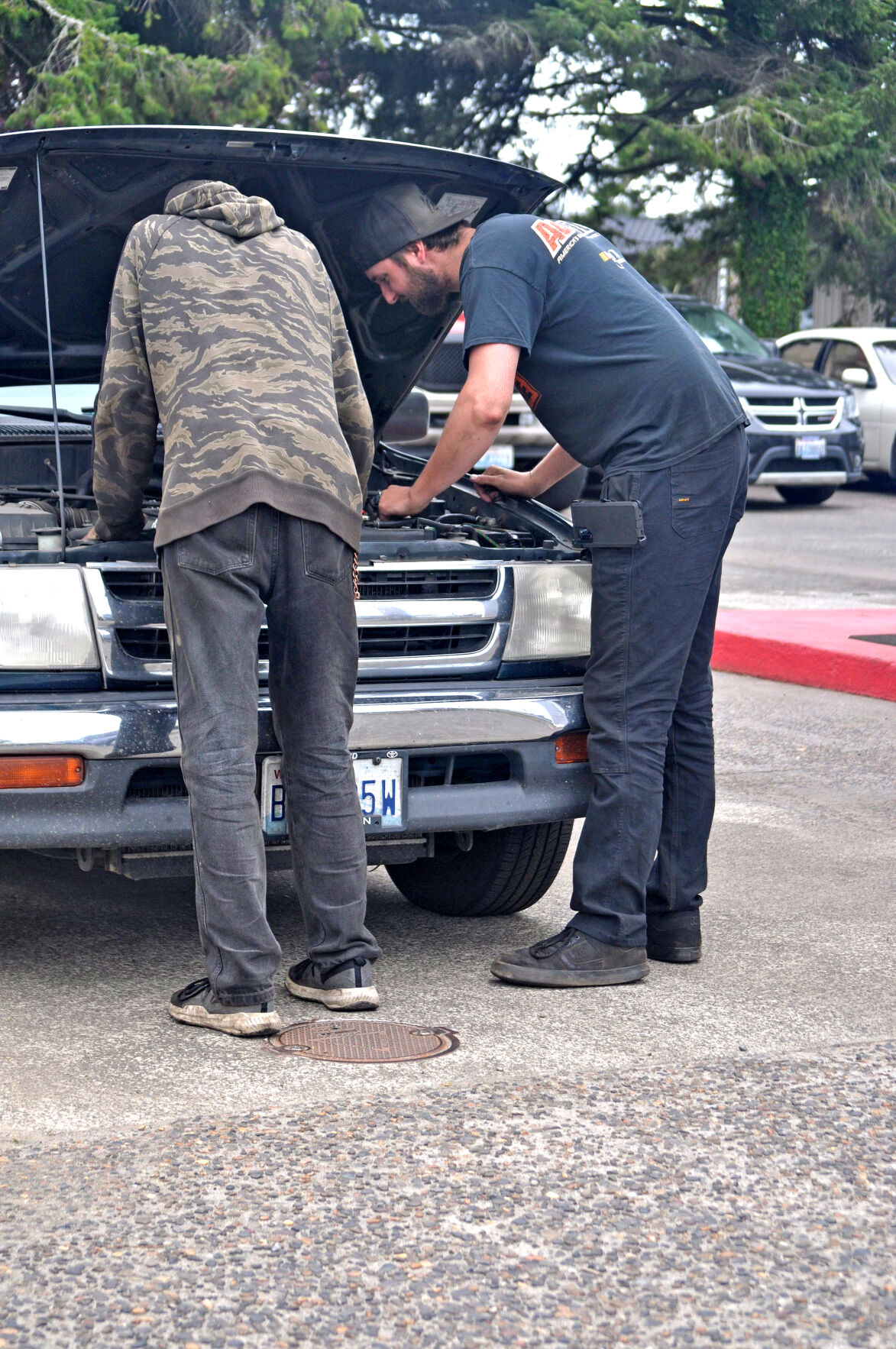 Mechanics Chris Woods and Travis Gaydos check an engine at Busted Knuckle Garage. They are part of the new team. 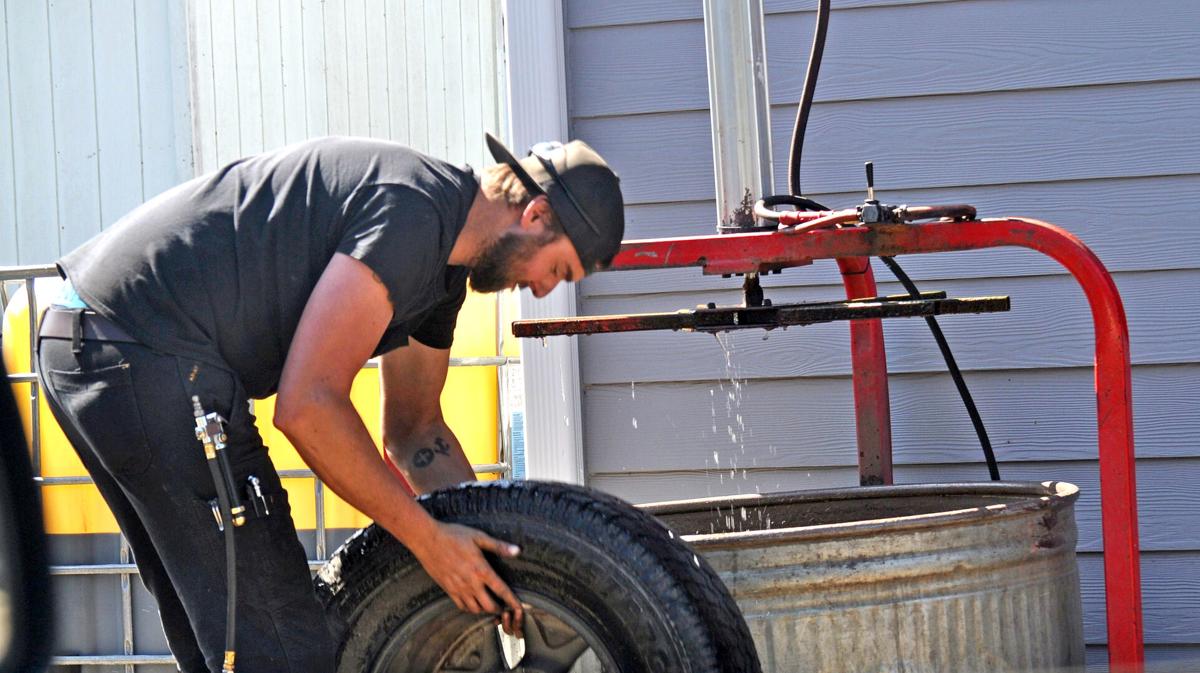 Travis Gaydos found a long nail after dunking a tire in the water tank. Busted Knuckle Garage is equipped to dunk and patch tires.

The next renovation project is remodeling the Busted Knuckle lobby, including a new more comfortable bunch and replacement of a sign of the past — the Guelfi family's linoleum floor squares. 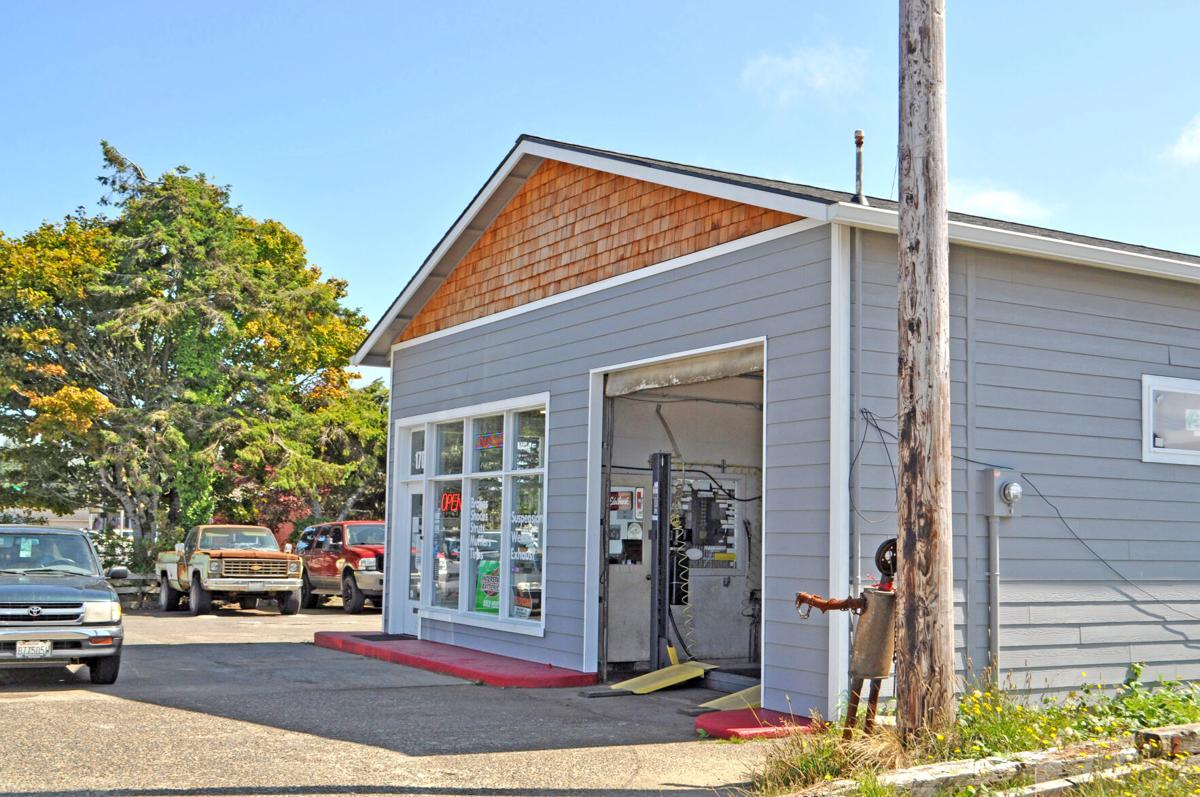 The building's renovation included changing the flat roof to one with a pitch, all new electrical wiring, new siding and new windows on the west and south sides.

OCEAN PARK — For the first time since it was built in 1941, 1702 Bay Ave. has received a total facelift. A new pitched roof has been constructed, new siding applied and new windows installed. And, the seemingly age-old interior wiring has been upgraded.

It looks totally different than before. So does its owner, Barry Coleman, but the change in his appearance wasn't planned. Cancer took him by surprise.

Coleman took over the auto shop in August 2017. He had always worked for other people and hadn't liked it, so his dream was to start his own business in this, his home town, where he has lived all his life. Opportunity struck with the availability of what is now his Busted Knuckle Garage.

"This was my last paycheck kind of deal, to get it going and make it or break it," Coleman explained. And things were going well until June 17, 2018 (his birthday) when he faced cancer surgery head on and had a 60-pound tumor removed from his stomach.

He spent 40 days in the hospital, got sepsis three times and almost died. But he is one tough cookie and he beat the odds. What kept him fighting for his life? "Family," he said, speaking of his wife and two daughters, ages 16 and 17. He had to get well for them.

'When I see you, I want to be sure we have a good rapport. I don't want to burn anybody. I want to be able to sleep at night.'

The removal of the huge mass in his stomach changed his appearance, but since then, so has the change in his life style. Before going into the hospital, he was often surrounded by cookies and other treats brought in by customers for Coleman and his Busted Knuckle crew. He was no stranger to Oreos. Now, however, he said he's allergic to such junk food and lives mostly on "vegetables and meat." This has slimmed him down even more.

Another medical situation recently took him back to a hospital. "I'm two months out of surgery now. I had a really bad hernia, so they opened me up and put it back together."

He's been told he isn't supposed to work for a year, but Busted Knuckle Garage is clearly his life and his dream continues. You won't find him lifting cars with a single hand or lugging big boxes of batteries to one of the shop's three bays, but chances are he'll be there almost daily, fully involved with the business.

Coleman is thankful for his shop manager, Daniel Smith, and his two mechanics, Travis Gaydos and Chris Woods.

For four years, Smith managed the North End Truck and Auto shop, owned by the Hill family. Then, he came to Busted Knuckle.

Coleman recalled, "A month after he started, he was still a little leery of starting a new job and I went into the hospital."

Despite basically learning his new position in a baptism by fire setting, Coleman said of Smith, "He's done a great job."

Smith talks about the building's face lift with both pride and relief. There was a lot to deal with before, especially with the flat roof which leaked like a sieve.

"When it rained outside, it also rained inside," Smith said. He described holes in the roof as ranging from small baby-sized to big enough to fit a man's fist through, and clear up to coffee can size. They dealt with the leakage as best they could. "You do what you have to do," he said.

From what he understands, over the years since its 1941 beginning, "It's been Band-aided here and there by various owners," but many people he's talked to have said this is the first major face lift.

Smith likes the fact that the shop is "in between two grocery stores." He said some customers leave a vehicle for something like an oil change and they can go shopping while the work is being done.

Bay Avenue has long been sort of a community hub. Area resident, Penny Jamieson, said that at one time on the "bank side" of the business, there was the Shake Shack. And to the west in what is now a parking lot, there was Oly's Nook, a bar and restaurant.

It was originally a gas station. Jamieson said Tommy Goulter owned it and she thinks it might have been a Shell station. Through the years, in addition to Guelfi's, it had been a string of repair shops, including Chrome Dome. But now, it's Barry Coleman's dream business and he is happy with the way things are going.

In this, his hometown, Coleman often sees his customers when he's shopping at a local store. "When I see you," he said, "I want to be sure we have a good rapport. I don't want to burn anybody. I want to be able to sleep at night."

His crew feels the same way and also appreciate what kind of boss he is. If they need time off to spend with family, Coleman makes sure it's arranged in the schedule. He worked too many years for inflexible bosses to treat his own crew poorly. "They're like family to me," he described.

Coleman's countless customers and friends are also dear to him. While he was certainly a tough cookie to make it through all his medical issues, he is known as a softy when it comes to people. He's a big, tall hugger who really cares about those around him. And while he'll no doubt curtail the hugs until social distancing is a thing of the past, that sincere part of him will always be ready to kick back into gear.