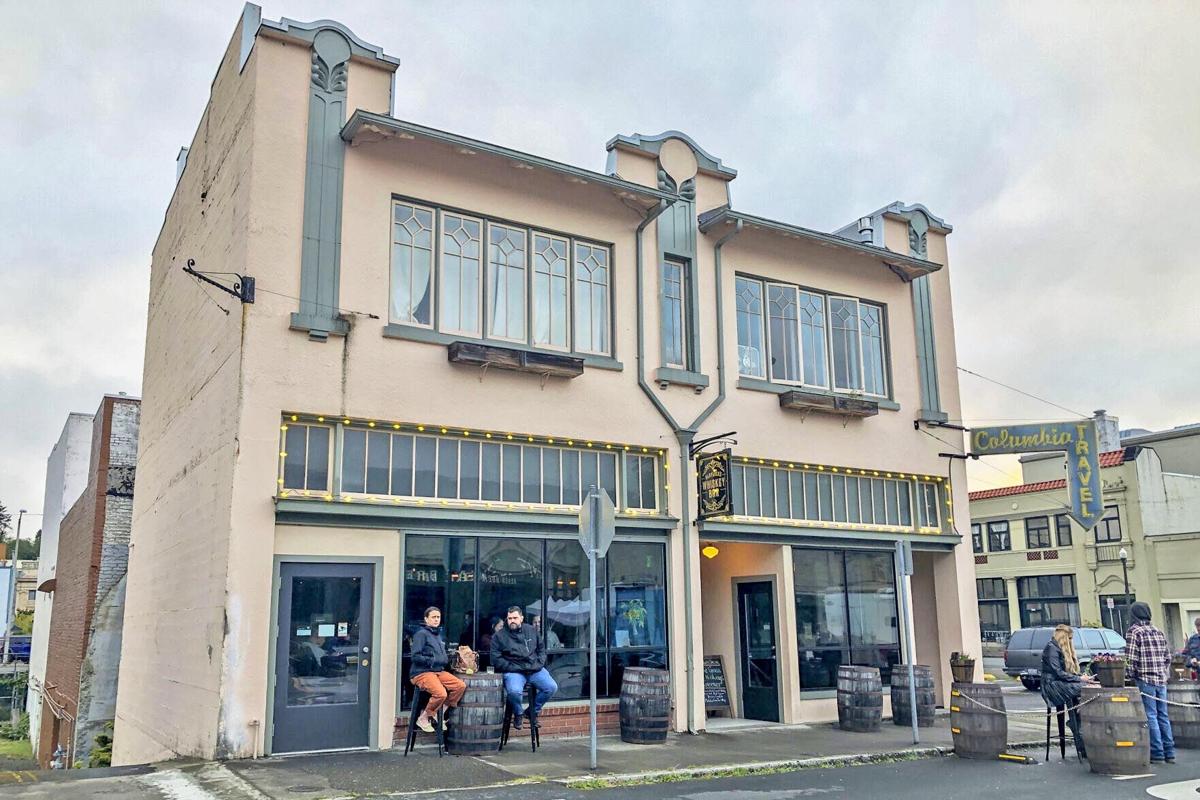 Blaylock’s Whiskey Bar has expanded its capacity with outdoor seats and a parklet on 13th Street. 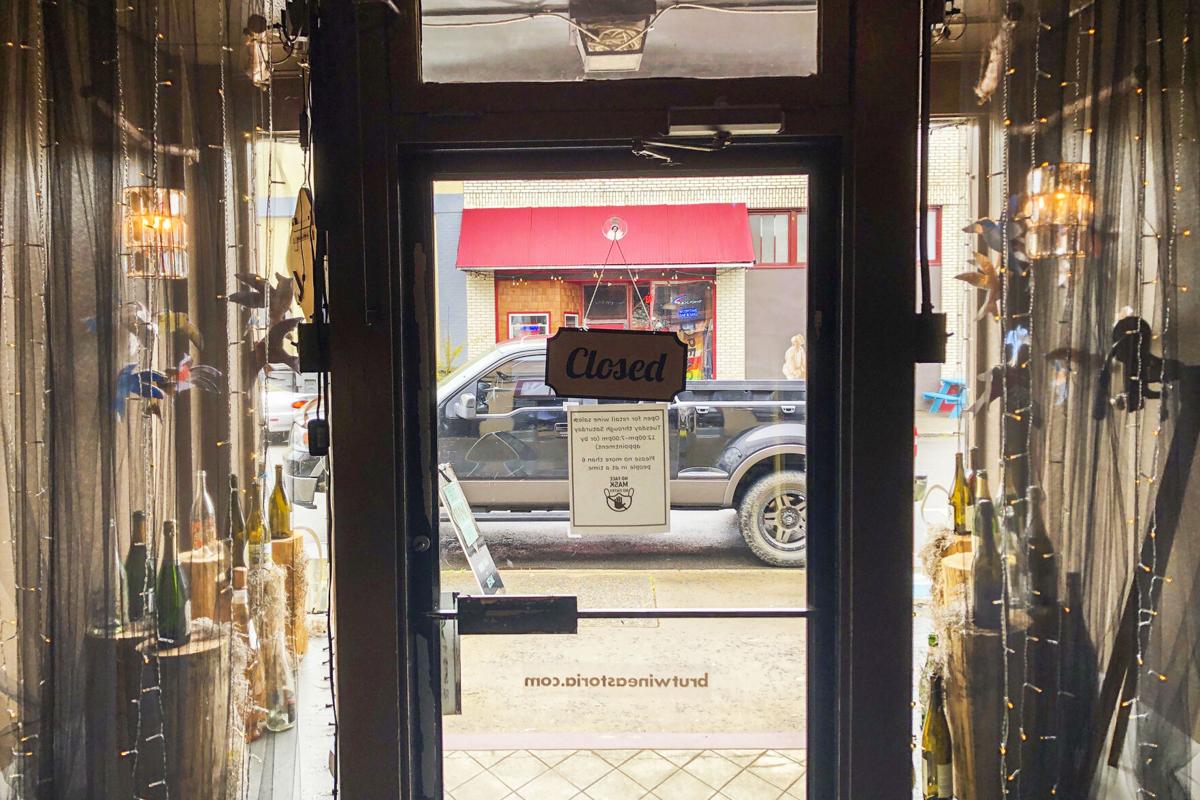 Lisa Parks hopes a parklet in the space outside Brut Wine Bar will bring more people to her shop, which has been closed to indoor dining for more than a year during the coronavirus pandemic. 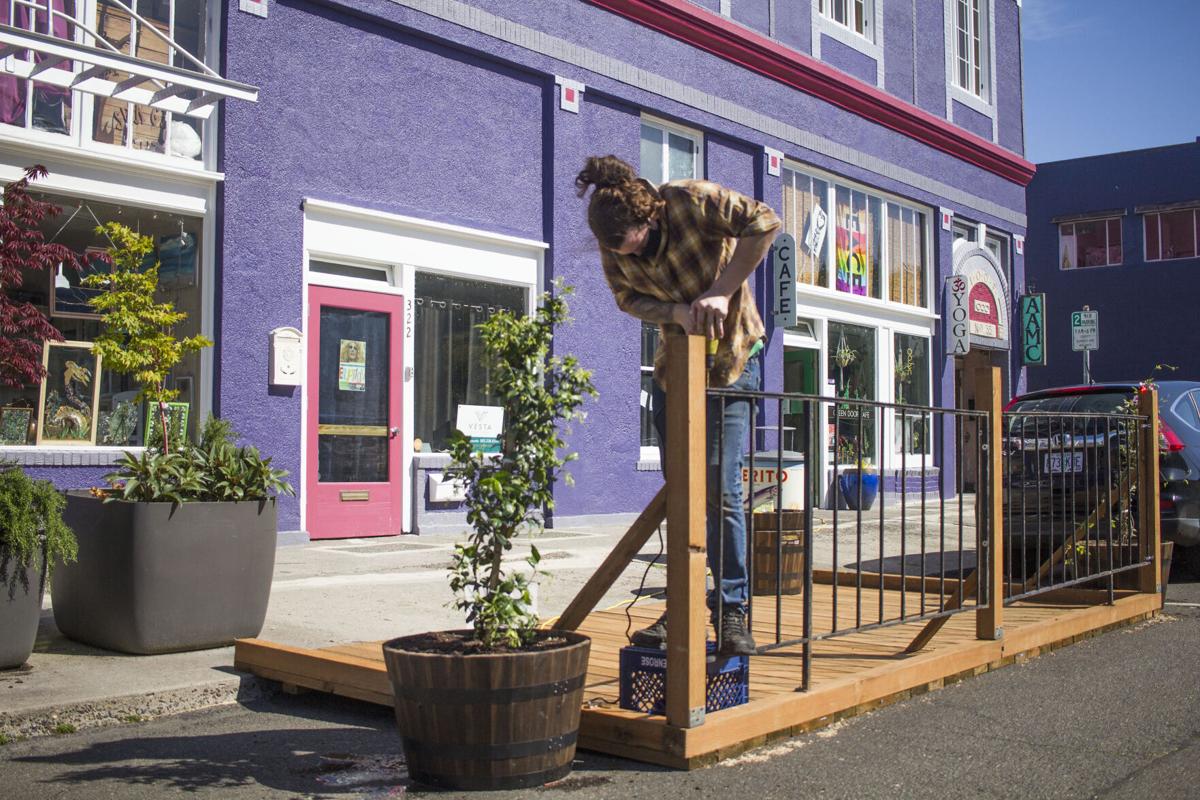 Wade Padgett works on a parklet outside The Green Door Cafe. He and partner Kendall Padgett-McEuen hope that theirs and another parklet outside Brut Wine Bar will help drive foot traffic on 10th Street in Astoria.

Blaylock’s Whiskey Bar has expanded its capacity with outdoor seats and a parklet on 13th Street.

Lisa Parks hopes a parklet in the space outside Brut Wine Bar will bring more people to her shop, which has been closed to indoor dining for more than a year during the coronavirus pandemic.

Wade Padgett works on a parklet outside The Green Door Cafe. He and partner Kendall Padgett-McEuen hope that theirs and another parklet outside Brut Wine Bar will help drive foot traffic on 10th Street in Astoria.

Lisa Parks had to transform Brut Wine Bar in Astoria into primarily a retail wine shop after the coronavirus pandemic made it unfeasible to let people drink inside her thin slot of a storefront. A couple upside-down garbage cans and chairs outside the front door this spring allowed Parks to let up to two groups sit down outside with glasses of vino.

Parks and other business owners along 10th Street have expanded parklets and other outdoor seating during the pandemic in a bid to enliven their corridor and draw more foot traffic.

Astoria allowed parklets, a temporary enclosed seating area set in a parking spot, to help businesses limited in capacity by the coronavirus. Other cities have gone even further, shutting down entire rows of parking spots and streets for restaurant seating.

Blaylock’s Whiskey Bar was one of the first to be approved to build a parklet on 13th Street. Co-owner Michael Angiletta called the additional outdoor seating a game-changer.

“It enables us to serve more people while we are operating at reduced capacity,” he said. “And … regardless of Oregon restrictions, it gives us an awesome staging area on the weekends where customers can sip on a cocktail outside while a table becomes available inside.”

Kendall Padgett-McEuen and partner Wade Padgett opened The Green Door Cafe in November on 10th Street in between Duane and Commercial streets, to main commercial thoroughfares downtown along with Marine Drive. The couple created a mostly to-go operation in the midst of virus restrictions on indoor dining. Soon thereafter, they applied with the city for a parklet that started going up this month.

Padgett-McEuen said she is particularly excited about the resurgence of 10th Street because most of the businesses along the corridor are at least partially owned by women.

Down the street is the Italian-themed Gaetano’s Market & Deli, owned by Rachel Gaetano, her brother, Matthew Gaetano, and his wife, Julie Hoffman. The market recently put out some stools and barrels in its own effort to attract more people to the sidewalks.

Rachel Gaetano said many of their customers had wanted a place to sit and eat the sandwiches at the market. But the storefront has no readily available bathroom required for indoor dining.

“We called the city and she said they are being pretty lenient on it right now because of COVID, so we thought we should just do it while that was the case,” she said.

There is a growing sense of partnership among 10th Street businesses that hope to match the activity of 11th Street, where the city’s first parklet was installed across from Astoria Coffeehouse & Bistro, and where a food cart pod creates a large amount of foot traffic.

Across the street from Brut is Merry Time Bar & Grill, owned by Todd and Terry Robinett. With several picnic tables already installed outside the bar, the couple surrendered their approved parklet permit to the city so Parks could move forward with hers. Parks hoped to have the parklet installed this month, adding space for another six to eight people to sit outside.

Parks, who offers a small selection of snacks at Brut, hopes to partner with other eateries along 10th Street to bring in food for people enjoying a glass of wine. She’s excited about how all the new outdoor seating will work together.

“You’re going to look down 10th Street and see a lot of people having fun outside, and you’ll want to go to 10th Street,” she said.