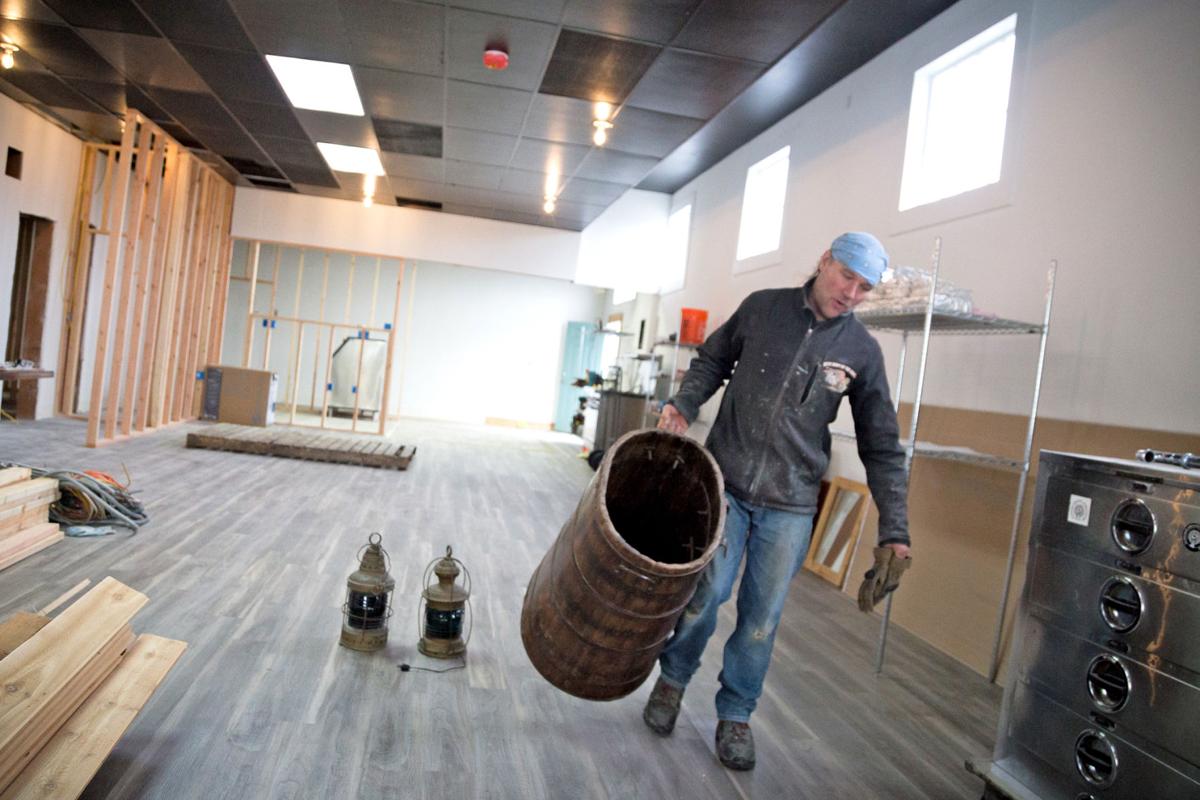 Bryan Carr has been busy preparing to open World's End Pub in downtown Long Beach over the past several months. The brewpub is anticipated to open in May. 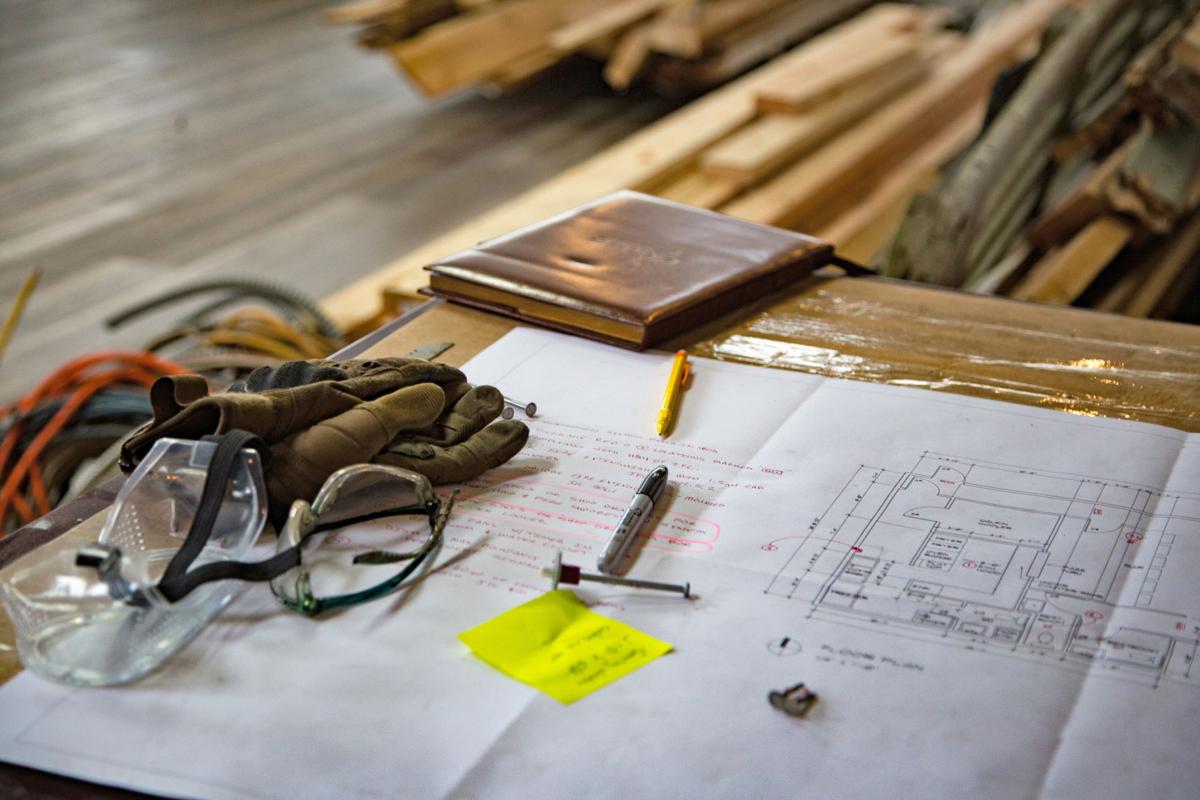 Reconstructing the former art gallery into a brewpub has been months in the making requiring an extensive electrical and plumbing remodel. 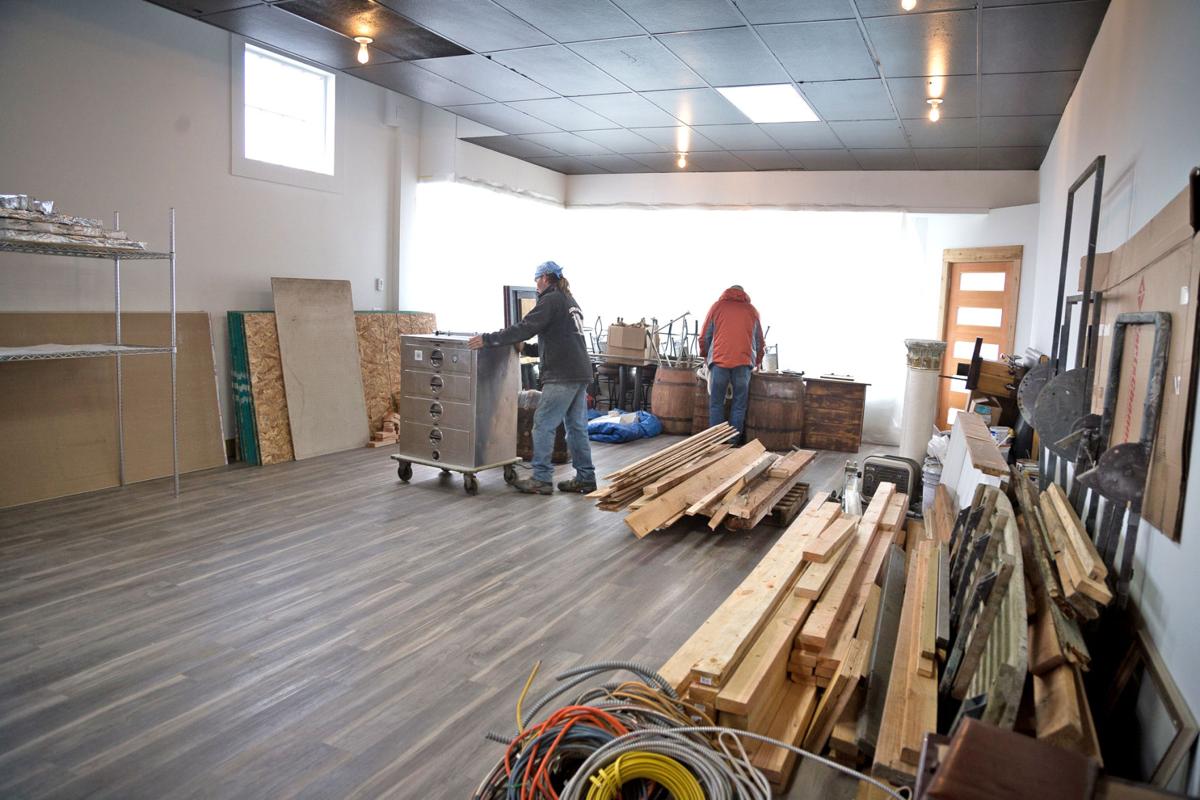 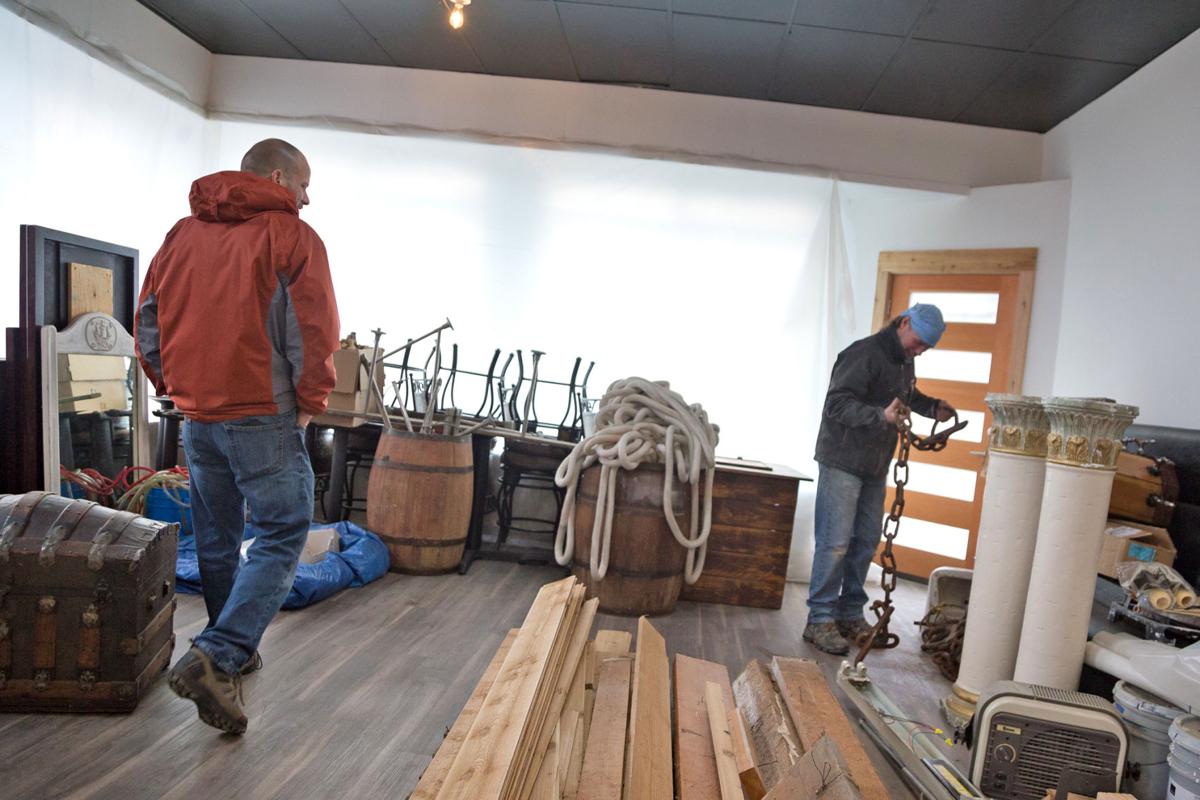 Timothy Inskeep, left, partnered with Carr and helped bring the brewpub into fruition. 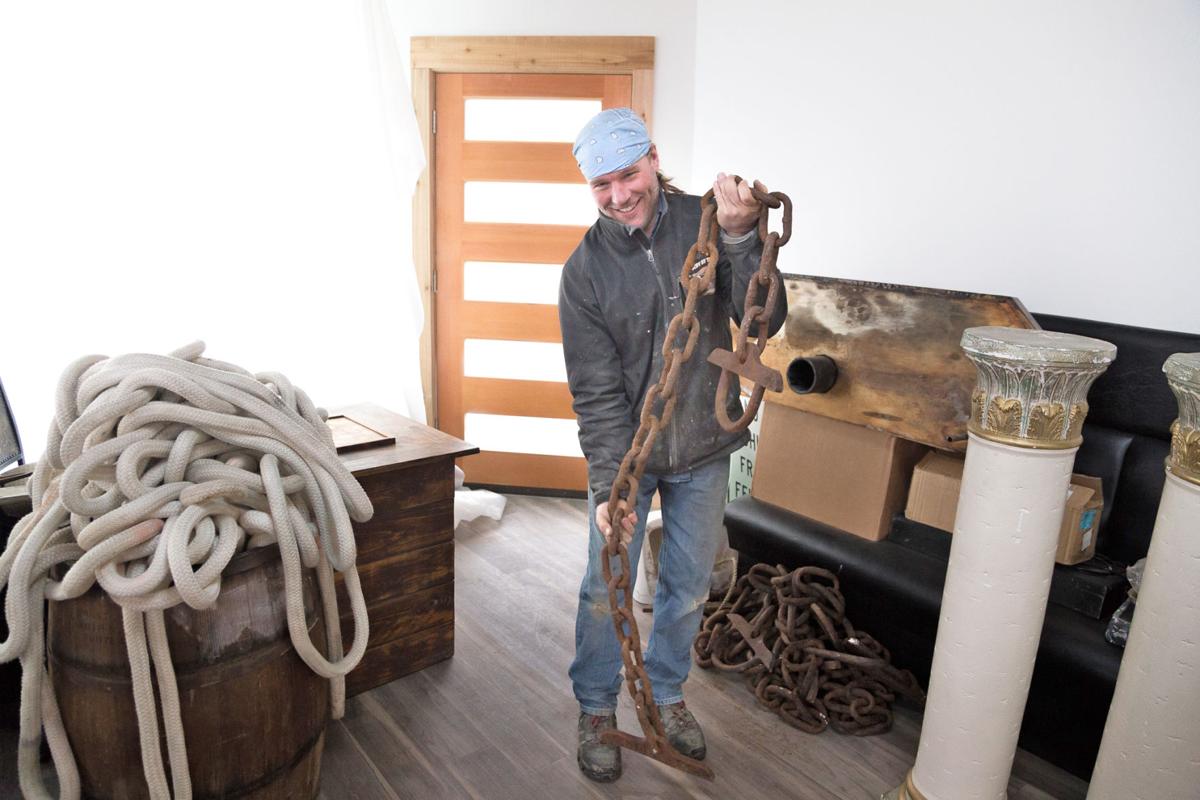 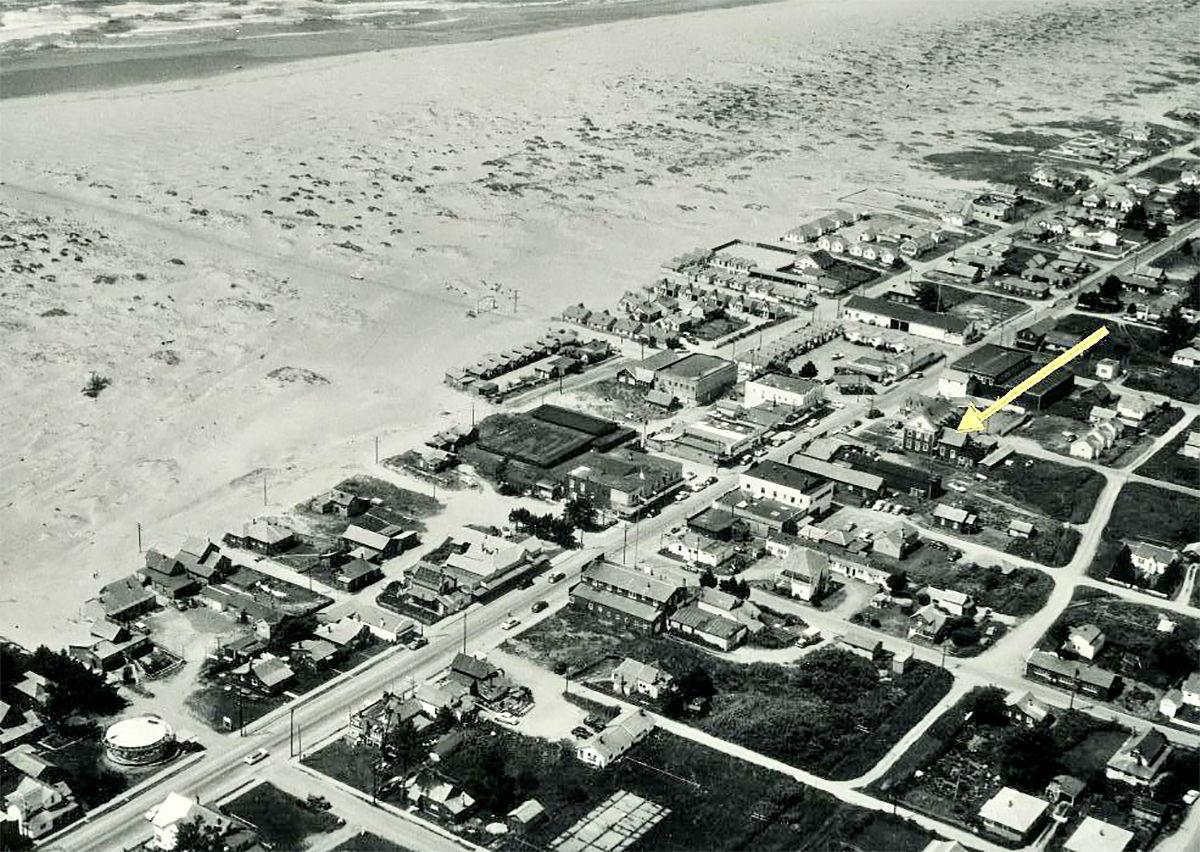 There have been many dramatic changes in downtown Long Beach — lots more trees, for one thing — since this aerial photo was taken in about 1955. The yellow arrow, which is contemporary to the photo, marks the old Long Beach Hotel, across Pacific Avenue to the east from the former gallery now being partially redeveloped as the World’s End Pub.

Bryan Carr has been busy preparing to open World's End Pub in downtown Long Beach over the past several months. The brewpub is anticipated to open in May.

Reconstructing the former art gallery into a brewpub has been months in the making requiring an extensive electrical and plumbing remodel.

Timothy Inskeep, left, partnered with Carr and helped bring the brewpub into fruition.

There have been many dramatic changes in downtown Long Beach — lots more trees, for one thing — since this aerial photo was taken in about 1955. The yellow arrow, which is contemporary to the photo, marks the old Long Beach Hotel, across Pacific Avenue to the east from the former gallery now being partially redeveloped as the World’s End Pub.

LONG BEACH — The Peninsula has long been known for its shipwrecked past, and soon there will be a brewpub that embodies it.

Final preparations are underway at 101 Pacific Ave. in Long Beach, the former site of the Campiche Studios art gallery and the new home of the shipwrecked-themed World’s End Pub.

The pub is expected to officially open in May, according to owner Bryan Carr.

There will be a full restaurant serving seafood-inspired lunch and dinners and traditional pub fair with a pirate twist. Hours are tentatively planned to be 11 a.m. to 10 p.m.

“It will all be fresh seafood from the local area,” Carr said, adding that he anticipates hiring six to eight employees in the coming weeks.

While Pirates likely downed whatever grog they had, customers at the pub will have an array of options from around the globe spread across approximately 20 taps.

“We hoping to have at least 20 taps,” Carr said. “We want to have something for everybody.”

Regional craft beers, wines and liquors from Oregon and Washington will be featured along with a rotating selection of brews not typically found here. Kombucha, cider, root beer soda and gluten-free beers will also be available.

Carr said they will take the same regional approach to wines as well as locally-made liquor from Adrift Distillers. The hardest decision has simply been where to start.

“There are so many breweries in this area that we will have a non-stop selection,” Carr said. “I’m going to be pulling from tiny breweries that are just trying to get a start.”

Carr got his first taste of the microbrew industry while in the Midwest, and plans to introduce one of his home-state favorites to the Peninsula.

“One place I’m thinking about in particular is Surly Brewing Company out of Minnesota because that’s where I was born and raised, and I have yet to see a Surly brew out here,” he said. “But mostly we’re going to concentrate on beers from the region, because that’s who we want to support the most. The microbrewery industry here has really been hot.”

The space was formerly occupied by the Campiche Studios, an art gallery located at the corner of Pacific and Bolstad Ave., a main artery in downtown Long Beach that leads under the iconic arch. (Before the gallery, the location was for many years a book store, first operated by gallery owner Nancy Campiche’s mother Val, then by the legendary and lovable Gordon Schoewe and Roy Gustafson, and finally by Nyel and Sydney Stevens.)

Shrouded in plastic, the space has been the center of speculation while it’s been under construction the past several months. Eden’s Bouquet held a grand opening on March 1, the first business to open in the remodeled building, and the brewpub is poised to be the second.

“I had an opportunity to pick a downtown location that I think will be really good, so I jumped on it and here we are,” Carr said. “I’ve managed to connect with key people and I think this is going to really exciting for the community.”

In October Carr and began preparing the space and acquiring artifacts that will add to the Pirate and shipwreck-themed ambiance.

“I’m most excited about the theme and the fun this going to generate,” Carr said. “I’ve lived here 10 years and watched the downtown area. It’s the heart of Long Beach. It’s neat that we’re now going to be a part of that and see what kind of a difference we can make. We’re going for a ‘Graveyard of the Pacific’ type of theme. We’re going to embrace the realities of what’s around here and our history.”

The glamorization of piracy, in part due to the recent “Pirates of the Caribbean” movie series, has helped soften the image of surly, swashbuckling pirates.

“As bad as it was at the time, piracy has gained a somewhat glorious reputation,” Carr said. “It was definitely a reality around here. Astoria was nicknamed ‘The most wicked place on Earth’ and shanghaiing was a part of that.”

Over the past several months Carr has been been traveling around Oregon and Washington seeking authentic artifacts from the ‘Golden Age of Piracy.’

“When you come in it will be a learning experience where you can see things from the 1600s and 1700s,” Carr said. “Not replicas, but the actual items.”

He found 18th century treasure chests, musket ball molds from the 17th century and pendants from around 1000 A.D. Other items include a peculiar, wooden barrel that once hooked to the side of a stagecoach and kerosene ship lanterns retrofitted for electricity and contemporary bulbs. An early 1800s treasure chest loaded with plastic pirate swords for the kids will greet guests at the entrance.

Bringing a fun, family-oriented option to the Peninsula is one of Carr’s primary goals for opening the pub.

“We’re constantly trying to decide where we’re going to go and what we’re going to do, and it seems like we always go across the river to Astoria,” Carr said. “I want to bring a business to town that gives people a place to go to have fun.”

From Minnesota to Washington

Carr, 44, moved to the area from Minnesota in 2009 and opened up Auto Body by the Beach which he’s operated on the Peninsula for the past 10 years.

About two years ago, he started to consider opening a brewpub. He researched potential locations along the coast from Long Beach to Lincoln City, Oregon.

“I did market analysis on the whole coast trying to find where the best place,” he said. “When this location became available it made the most sense.”

Carr first became aware the building was available after noticing an ambitious remodel over the summer.

“They put the for-rent sign in the window and I watched it all summer long,” he said. “I was surprised nobody had scooped it up.”

In the fall Carr made inquired about the space and soon signed a lease.

While acquiring kitchen equipment for the new establishment Carr met Timothy Inskeep, who previously operated the Saltwater Bar and Grill in Long Beach. Inskeep was selling off kitchen equipment and considering a move back to Texas with his family when Carr came to inquire about purchasing items for the pub. Both realized that it could be an ideal partnership.

Inskeep has 34-years experience in the restaurant industry including several fine-dining establishments, which complimented Carr’s prior experience in fast-paced kitchens across the Midwest.

“We’re both entrepreneurial spirits that don’t sweat the small stuff,” Inskeep said. “We talked about it and came to the conclusion that it would work.”

Opening a pub that allowed families an opportunity to dine out with their kids appealed to Inskeep.

“My last restaurant was higher end, so I didn’t get to see a lot of kids,” he said. “But this is going to be place where parents can bring them.”