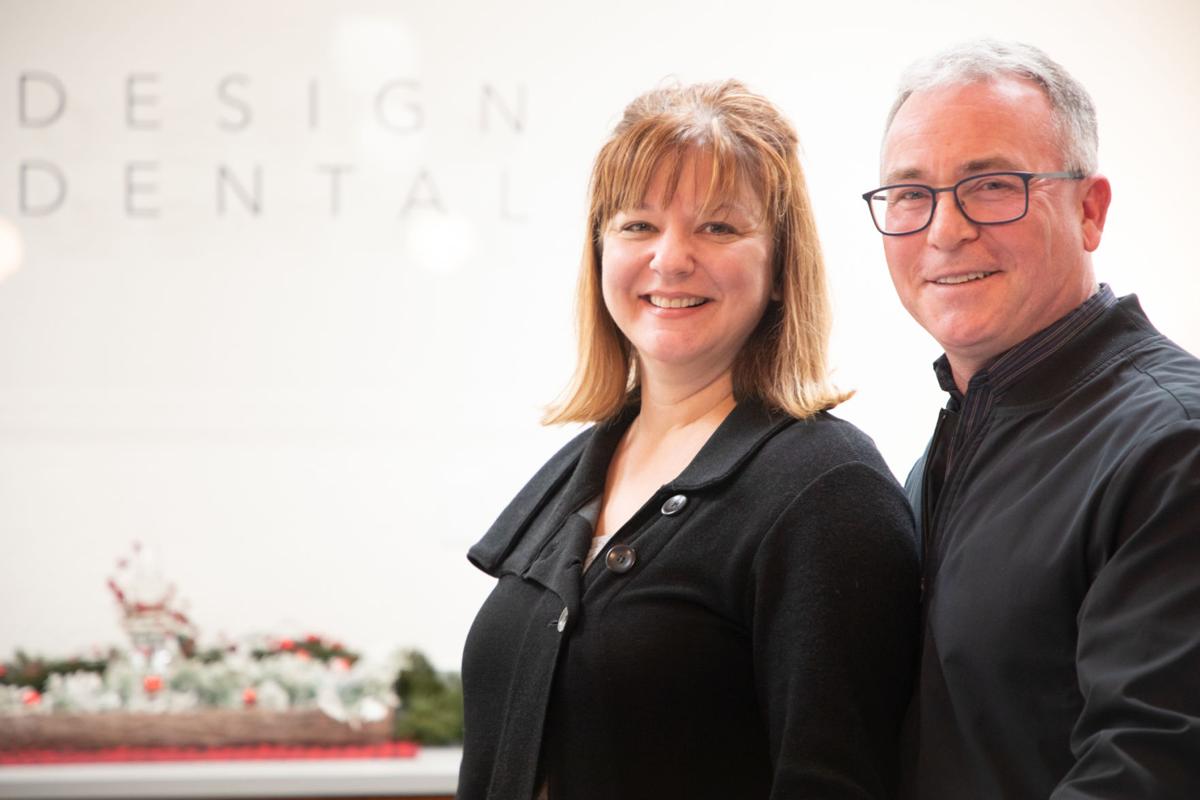 Daliah and Dr. Daniel Lundquist have operated their dental business on the coast since 2008. 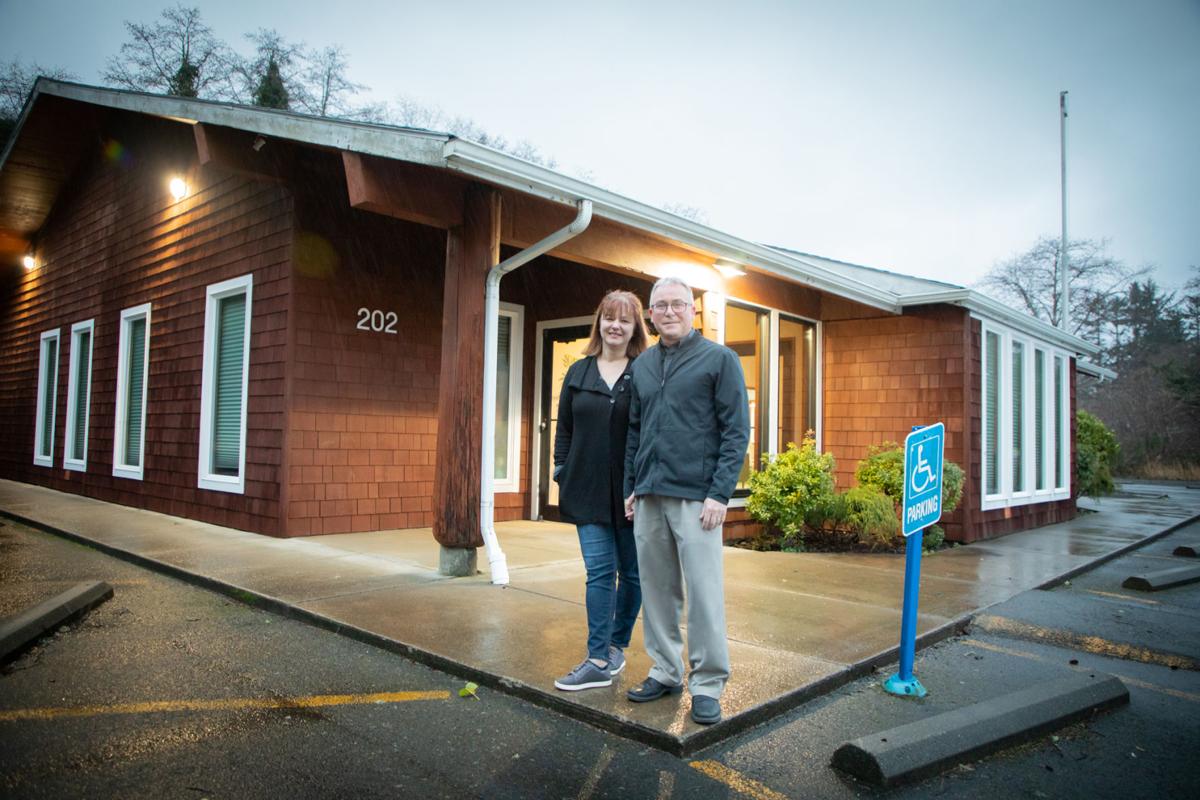 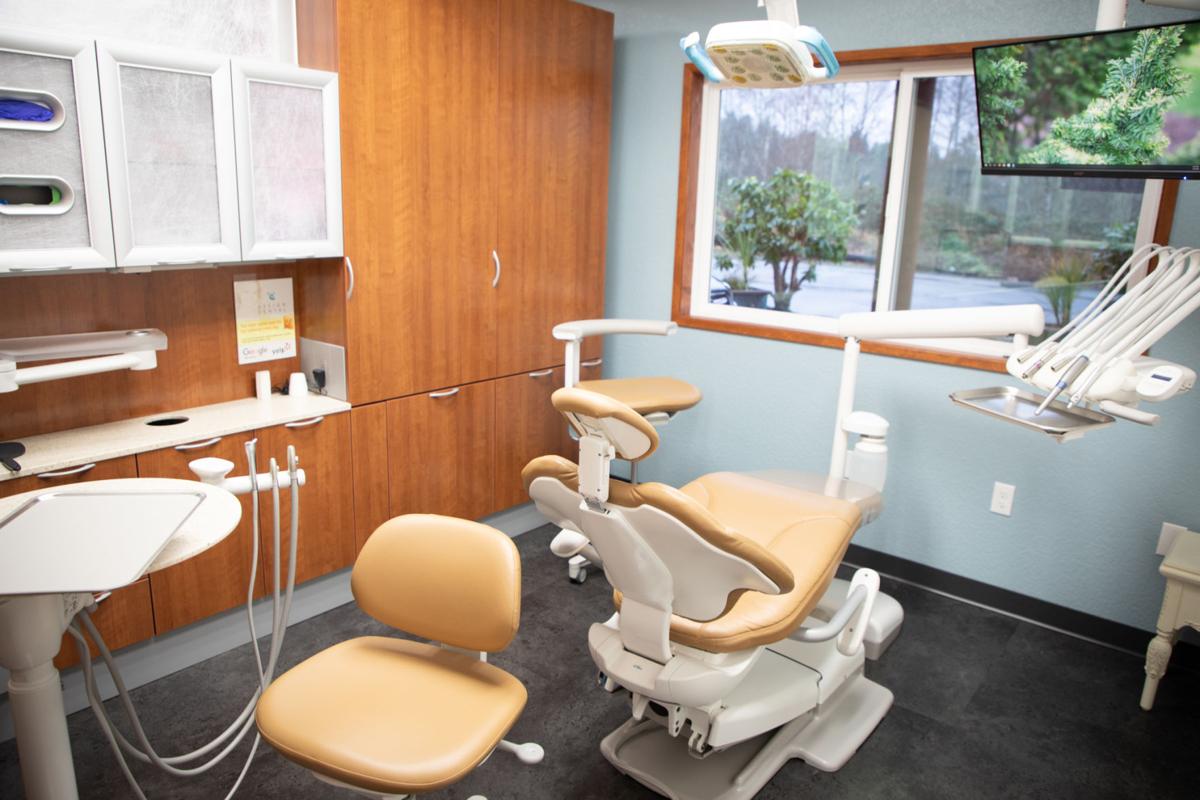 Design Dental and Implant Center in Ilwaco is equipped to handle comprehensive treatments that would typically be referred out of the area. 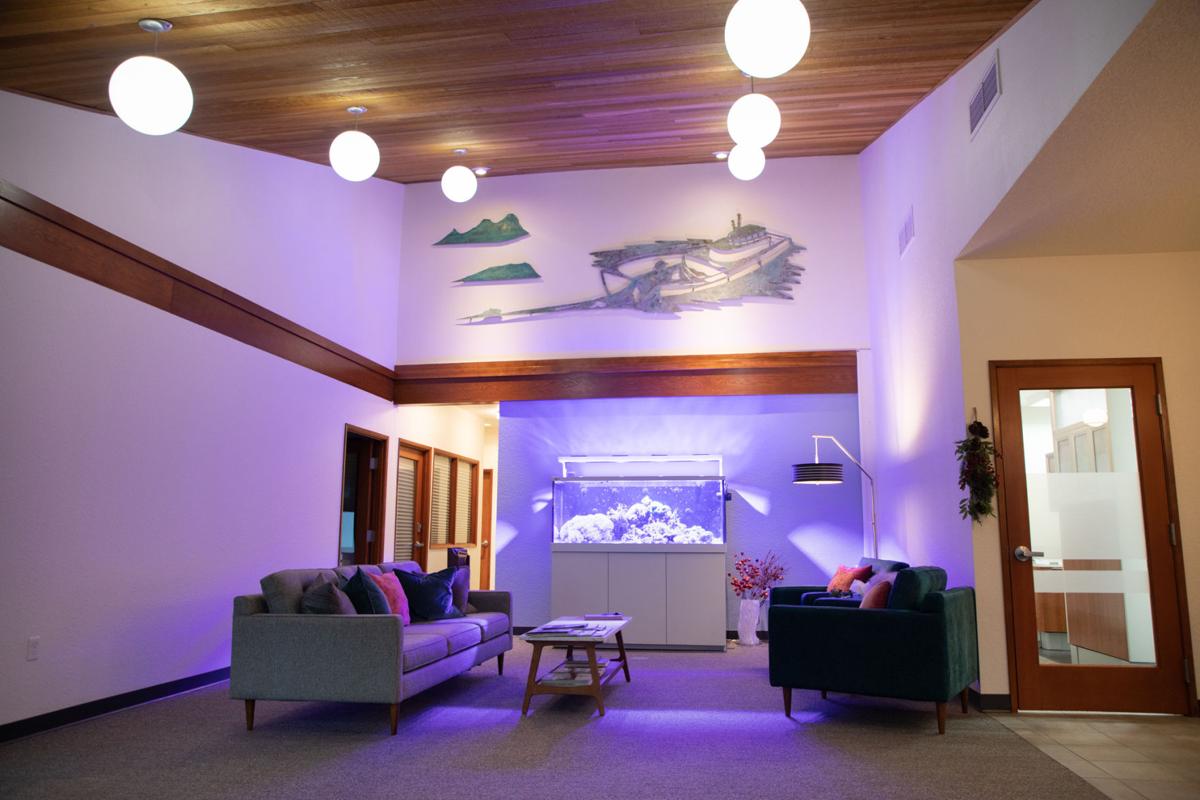 The Lundquists hired a dentist-specific contractor to help transform a former bank into the ideal dental office. "We were trying to create something aesthetically pleasing and comfortable for people who may be anxious coming in. That was our biggest goal," Daliah said. 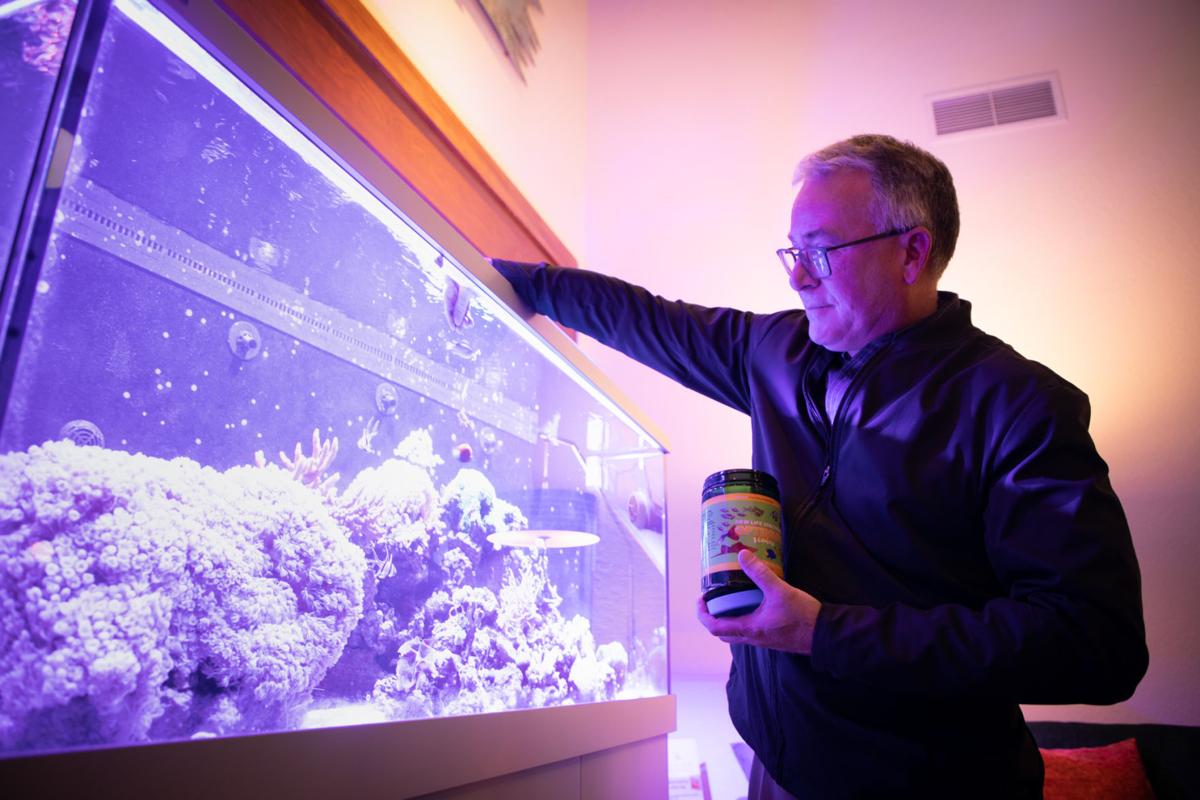 Dr. Daniel Lundquist feeds the fish in the waiting room aquarium of the dental office after work in early January. Studies have shown that aquariums can reduce stress and anxiety.

Daliah and Dr. Daniel Lundquist have operated their dental business on the coast since 2008.

Design Dental and Implant Center in Ilwaco is equipped to handle comprehensive treatments that would typically be referred out of the area.

The Lundquists hired a dentist-specific contractor to help transform a former bank into the ideal dental office. "We were trying to create something aesthetically pleasing and comfortable for people who may be anxious coming in. That was our biggest goal," Daliah said.

Dr. Daniel Lundquist feeds the fish in the waiting room aquarium of the dental office after work in early January. Studies have shown that aquariums can reduce stress and anxiety.

Can you tell me a little bit about your education and work history?

Daniel: “I went to dental school at Indiana University and graduated in 1995. I’ve been practicing in the northwest ever since. I’ve been here on the coast since 2008.”

Where are you from originally?

Daniel: “I’m originally from British Columbia, Canada. We’ve been in the U.S. close to 30 years now.”

What motivated you to go into dentistry?

Daniel: “I like working with my hands, having one-on-one interactions with people and doing lab work. Dentistry allows me to do all that.”

How did you come to Ilwaco?

Daniel: “Originally I had a practice in Vancouver, which I sold in 2007.”

Daniel: “An opportunity to open a practice on the coast came up, so I ended up taking over the business here in 2008.”

You’ve done some renovations at your new location, can you tell me about that?

Daniel: “It started last winter, when we became aware the building came on the market. We’ve always liked this building and thought it was an excellent opportunity. We had a vision of what this building (formerly a bank) would look like as a dental practice. We had a dental-specific contractor put the details together. It was a few months in the making.”

Daliah: “We were trying to create something aesthetically pleasing and comfortable for people who may be anxious coming in. That was our biggest goal, to make this a relaxing environment where people could come in and talk about their dental concerns.”

Daniel: “The environment was paramount.”

How do you calm kids or adults who are anxious about seeing a dentist?

Daniel: “When they first come in it’s relaxing. It’s listening to people, a lot have anxieties and concerns. We take the time to listen, address those concerns and make them feel comfortable.”

What’s the most common procedure?

Daniel: “We do most everything. It’s hard to say what’s the most common. We do a lot of crown/bridge work, root canal therapy. Most of the procedures except orthodontics. We do some pretty challenging cases.”

Daliah: “A lot of things that people would get referred out for, he does it all here.”

Is there an area of dentistry you consider your forte?

What’s the most common mistake people make with their teeth daily?

Daniel: “It may be something they don’t do daily (ha-ha). I think drinking pop on a regular basis can be quite detrimental. I’ve heard a lot of stories from patients where they would sip on Coke or Mountain Dew all day long. It’s basically bathing your teeth in acid. It’s pretty detrimental.”

What’s the most common misconception you encounter?

Daniel: “The biggest misconception is people thinking things are going to hurt. There’s no reason that things have to hurt no matter what procedure we’re doing.”

What would you consider the most challenging or complex procedure?

Daniel: “Sometimes root canal treatments can be a little challenging. Any procedure can be challenging it just depends on the situation.”

Daliah: “He went to Indiana University, where Crest was developed.”

Daniel: “As far as a specific brand, I couldn’t say you better get Crest or Colgate…A toothpaste that’s been ADA approved.”

What foods are worst for our teeth?

Daniel: “Sticky, sugary candy. The sugar adheres (to the teeth) and stays. Pops are quite bad, because there’s already acid in the pop and then there’s sugar, which gets turned into acid.”

How do electric and manual toothbrushes compare?

Daniel: “There can be benefits to an electric toothbrush, because of the vibrational action of the bristles. They can be more thorough and effective. You can do a similar job with a manual toothbrush if you’re diligent and conscientious about how you’re doing it.”

What’s been the biggest technological change in dentistry you’ve experienced?

Daniel: “Computers and x-rays. When I finished dental school computers were available. Shortly after that came x-rays or radiographs that could be taken with sensors instead of using film that you develop, so that’s been a big change. Patients don’t have to wear a lead vest anymore.”

Daniel: “That’s an interesting question. It depends on the person and their diet. You would be hard pressed to say flossing isn’t helpful. It’s definitely an advantage for preventing decay between your teeth and keeping the gum tissue healthier.”

What’s one part about dentistry you never anticipated, something that’s surprised you?

Daniel: “The actual dentistry, doing procedures and treatment, that’s the easy part. Before I got into business, I thought doing the dentistry was going to be the challenging aspect, but it’s actually running the business end of things that’s been the biggest surprise.”

Do you feel dentistry has gotten prohibitively expensive?

Daniel: “I think the cost of dentistry for patients has remained relatively constant with inflation, to the best of my understanding. I have noticed that with dental insurance that came out in the 70s and 80s, people would have yearly coverage of about $1,000 or maybe $1,500. The crazy thing is now 30 or 40 years later, their insurance still has limits of $1,000 or $1,500. It’s not keeping pace with the costs. It gives people the perception that costs have gone up.”

What part brings you the most satisfaction?

Daniel: “When you can transform someone’s smile… the final result you get and they’re at a loss for words. I’ve had people crying with joy when they see the final result, that’s the best thing.”