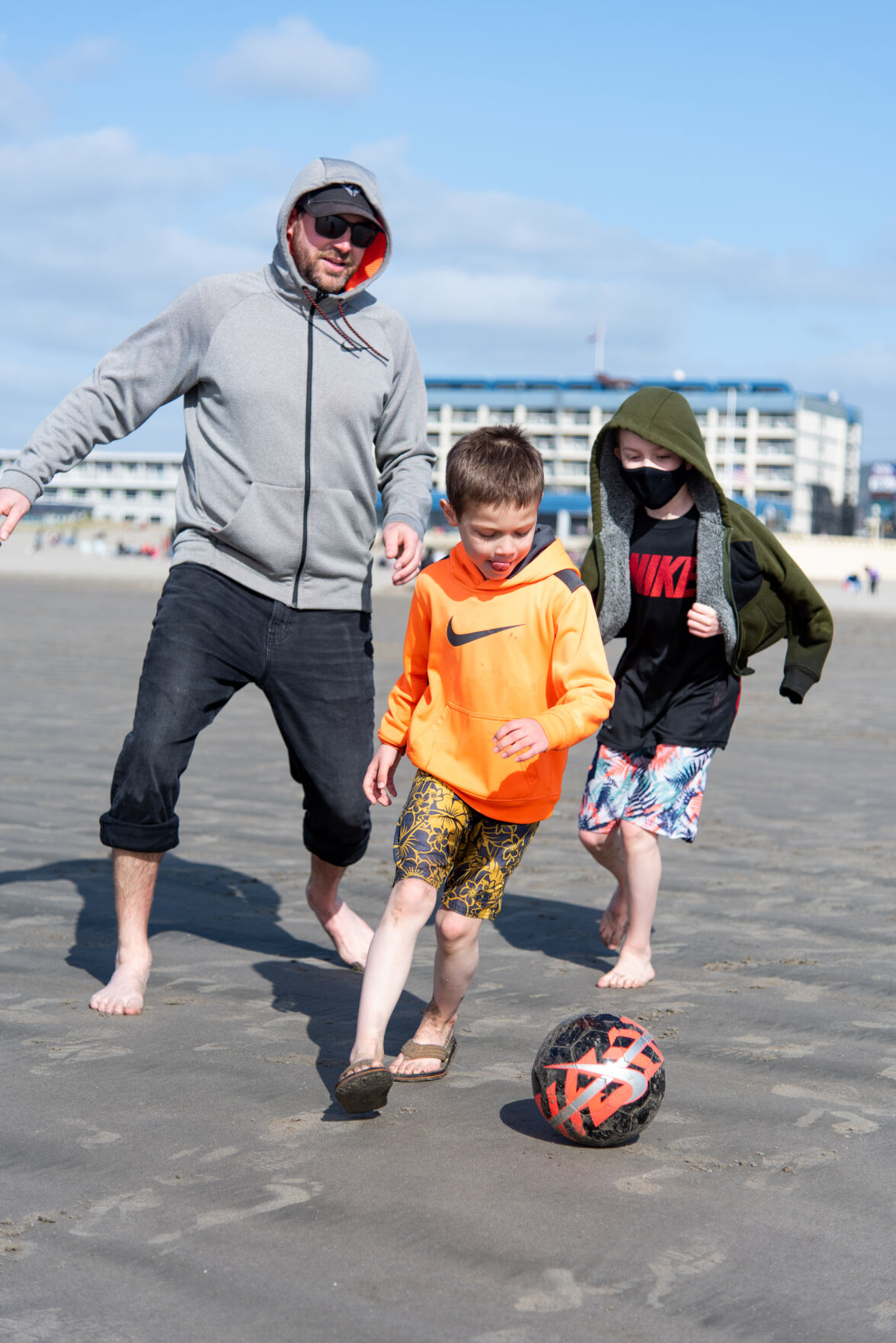 Kyle Crawford, left, plays soccer at the beach in Seaside with his sons Carter and Roman on Friday afternoon. 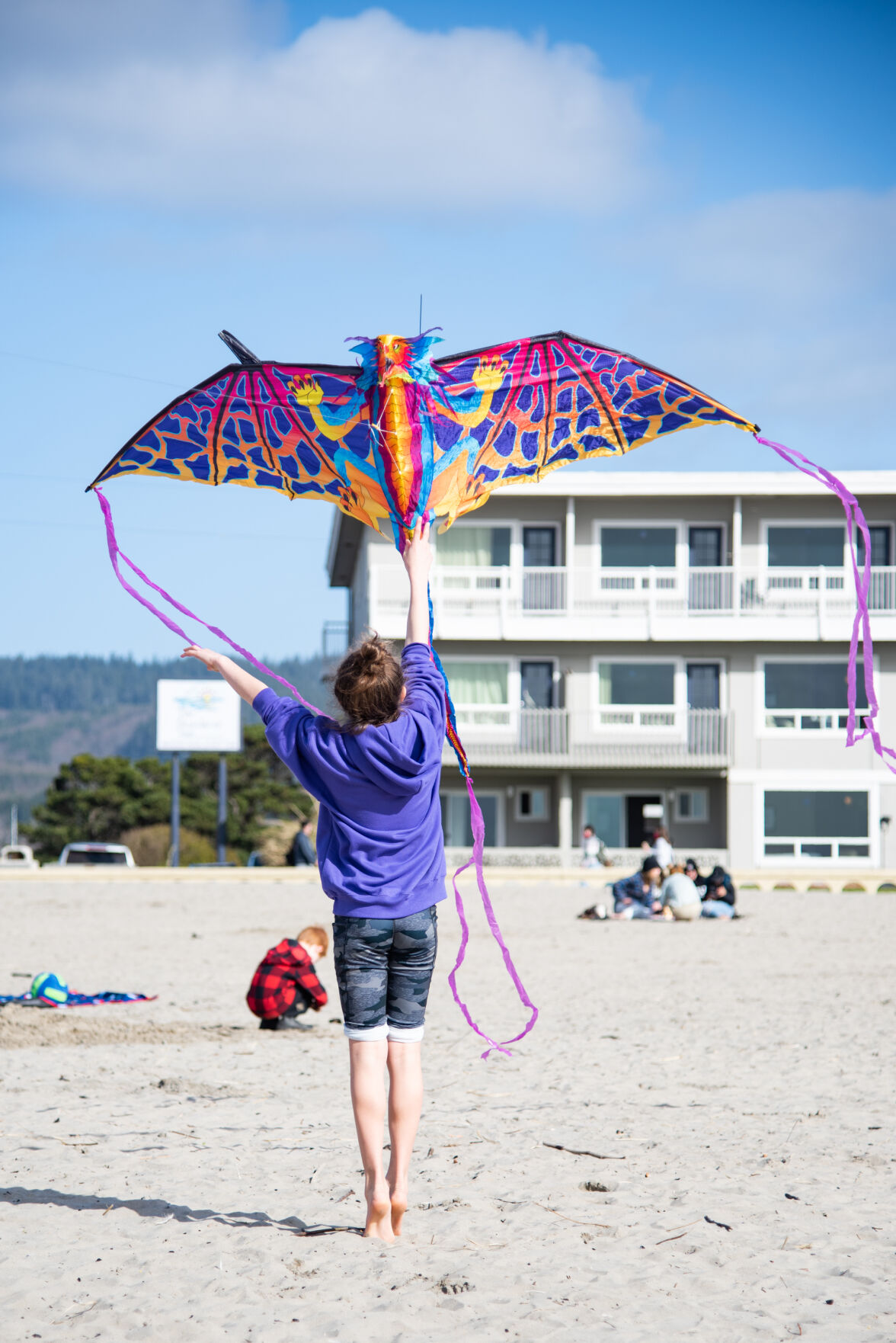 Hailey Buitron helps a kite into the sky. 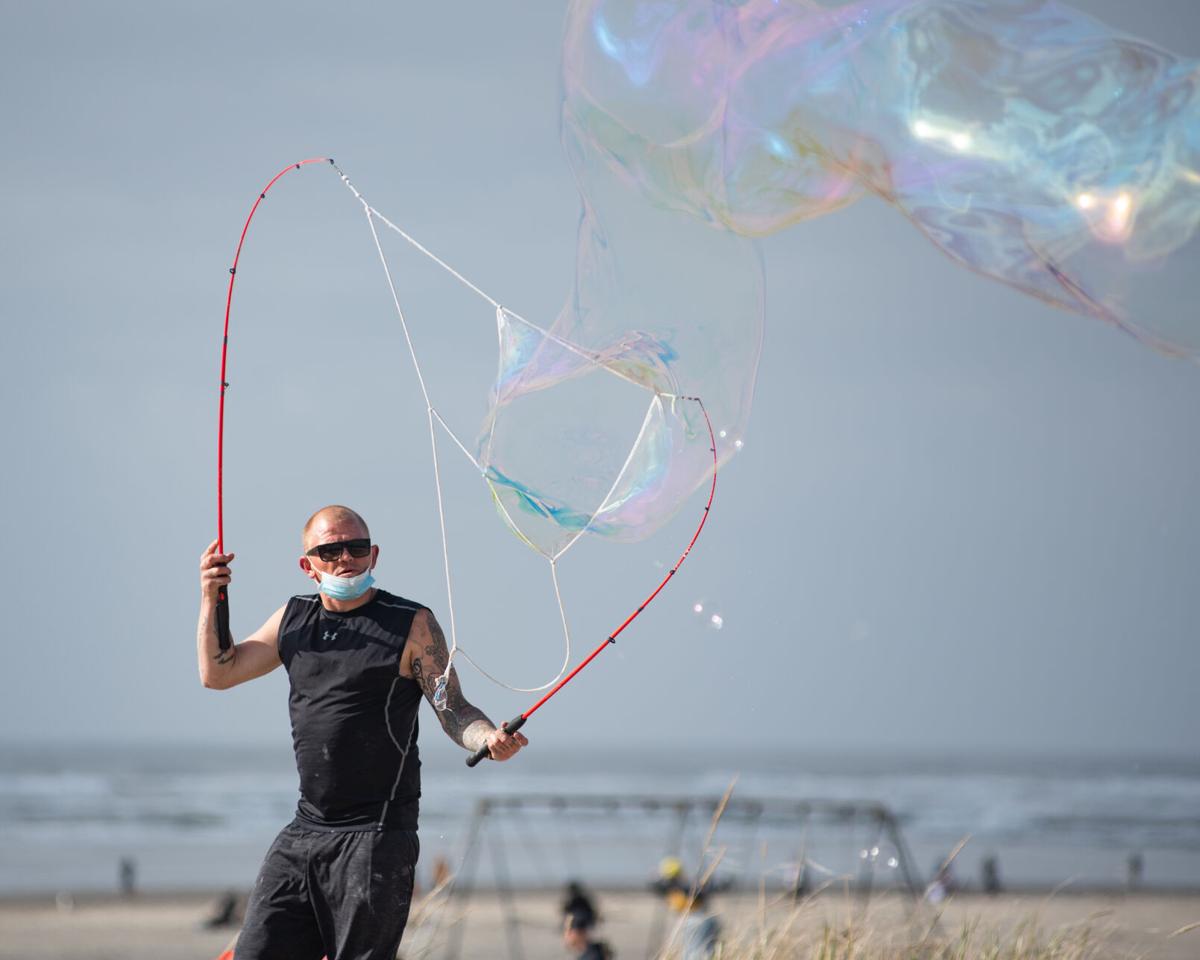 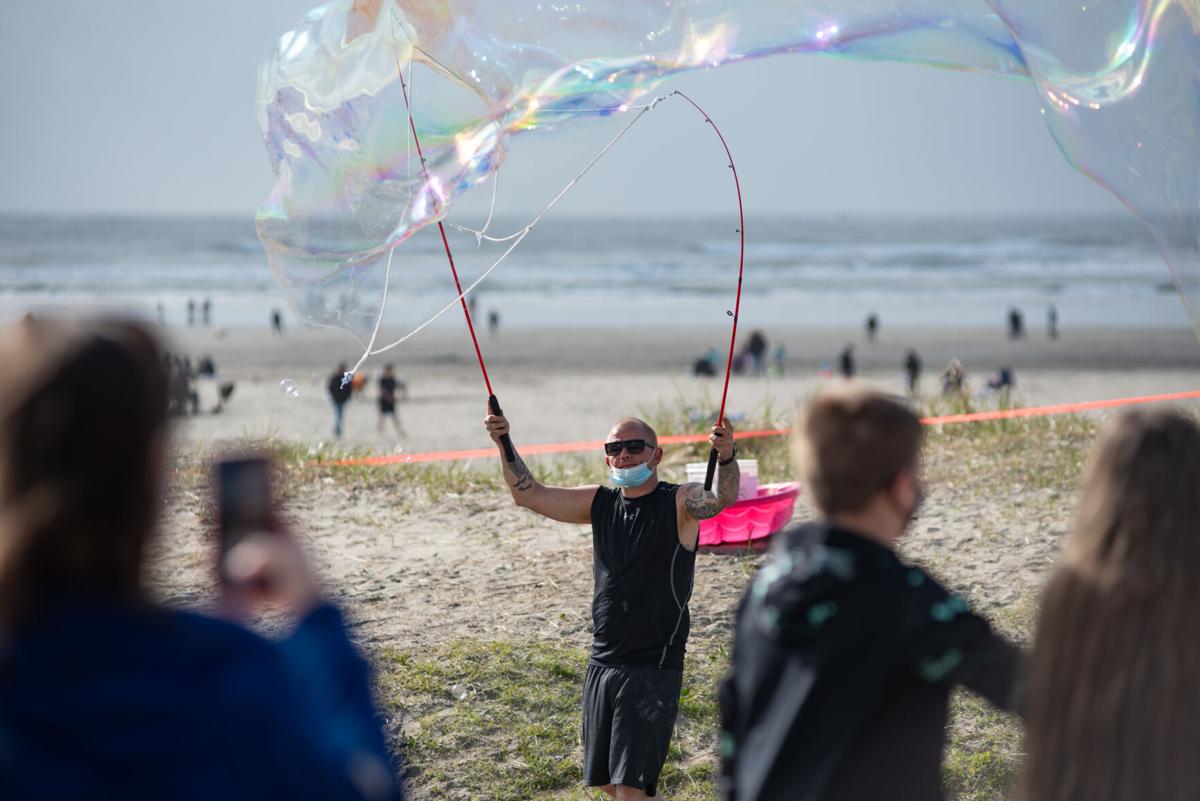 Kyle Crawford, left, plays soccer at the beach in Seaside with his sons Carter and Roman on Friday afternoon.

Hailey Buitron helps a kite into the sky.

With visitors filling hotels, restaurants and parking lots to capacity, spring break 2021 looked very different from spring break a year ago, when cities were discouraging out-of-towners from coming to the coast.

While transient lodging tax numbers indicating the amount of spring breakers aren’t available yet, tourism organization directors and local leaders said they’ve seen their cities enliven with tourists in the past few weeks.

The state of Washington broke up the spring break schedule by school district, so while Ocean Park and several others had their spring breaks April 5 to 9, Seattle Public Schools’ break was slated for April 12 to 15.

Andi Day, the executive director of the Long Beach Peninsula Visitors Bureau, said the peninsula experienced a busy January and February during the state’s mid-winter breaks, so she expected to see a busy spring.

In early 2020 before the coronavirus pandemic hit the coast, the peninsula had its best January and February on record, until restrictions were put in place to protect against the spread of the virus.

“Our tourism industry is to be commended for quickly adapting and adhering to safety protocols while weathering the stormy seas of restrictions, phases and ever-changing guidelines,” Day said.

Despite the business closures and limitations, the third and fourth quarters of 2020 were strong for tourism, with lodging sales running only slightly below the record-breaking numbers during the same period in 2019.

Day said the peninsula’s geo-fencing and spending data shows tourism is off to a strong start again this year.

“Measuring unique weekly visitors at lodging properties, we show the first six weeks of this year as the best ever and late February and early March only slightly below the record-setting 2020,” Day said. “Our tourism and supporting businesses are working hard to keep visitors and locals safe while keeping the doors open and making up for lost time.”

She added the peninsula’s wide open spaces, outdoor activities, lodging options and restaurants make it an ideal destination for an overnight getaway or road trip.

“All these assets combined with a pent-up demand for travel and the steady vaccine rollout tell us to expect lots of company again this year,” Day said. She added the detour on Highway 401 that resulted from a landslide between Naselle and Astoria could also bring new traffic to the peninsula. The visitors bureau is turning the detour into a marketing opportunity, calling it the “Detour to Discovery.”

The visitors bureau is starting new initiatives to encourage tourism growth, including a direct booking engine for local lodging businesses on its website, visitlongbeachpeninsula.com, and a marketing toolkit to recruit more filming projects to Pacific County.

Bonnie Cozby, president of the Ocean Park Area Chamber of Commerce, said she’s planning to prepare for large weekends and a high amount of traffic this season.

“Retail is an area that should get a lovely boost from this season’s visitors,” Cozby said, adding the key will be holding down COVID-19 caseload numbers.

“Businesses have risen to this challenge last summer and will continue to do so,” Cozby said. “The wildcard is the visitor … will they be fed up and want to cut loose or has the message to remain careful been taken to heart? With more people fully vaccinated, we have a better chance than last season.”

While hotels in the Astoria and Warrenton area were filling up with both visitors who had made reservations and last-minute sign-ins who secured the last available rooms, some of them were facing an added challenge of being understaffed.

David Reid, executive director of the Astoria-Warrenton Area Chamber of Commerce, said this challenge is becoming widespread in the hospitality, retail and food service industries, which make up about 34% of the area’s workforce.

“They can’t get people back to work,” Reid said, noting the many causes for this could include caution about the pace of bringing staff back, as well as the lack of childcare options in the area. “They’ve had a great weekend filling up the rooms, but it’s been rough in terms of not having enough staff.”

Henry Balensifer, the mayor of Warrenton, said there was a workforce shortage before the pandemic, but it’s much worse now.

“Employees are working longer hours to produce the same amount,” Balensifer said. “How can businesses get back to normal when they can’t have their workforce back to normal?”

Balensifer said the region hasn’t felt overly crowded, but tourism has been steady and local businesses have been pragmatic in deciding how much inventory to stock to meet the demand without having too much to sit on.

Overall, visitors have been following guidelines and respecting the need for virus-related restrictions, according to Bruce Jones, mayor of Astoria and deputy director of the Columbia River Maritime Museum.

The museum’s visitation numbers for March were at about 90 to 95% of the numbers for the same time period in 2019. Jones added he didn’t see the same level of concern from locals about visitors coming in compared to a year ago.

“The moderate risk level restricted the number of people who could be in the museum, and there were days when we did reach that level and had people wait to go in,” Jones said. “Very few guests were upset about the restrictions, people seem to have adjusted.”

For retail businesses, limiting the number of people allowed inside a business can act as a filter, Reid said, as serious buyers tend to wait for their turn while those who wouldn’t buy anything anyway won’t wait.

Jones said he has a good feeling about tourism and community health.

“I’m very hopeful by mid-to-late May we’ll have a really high percentage of vaccinations completed among residents and that will come as the summer traffic heats up, which will allow us to have people in town more safely,” Jones said.

“I heard from the Carousel Mall they were very busy as far as the pulse of people coming in,” Heineman said. “But it’s been surprisingly busy for a while.”

While reviewing Seaside’s transient lodging tax numbers for 2020 and 2019, he found it surprising that the numbers were up by 29% in October to December 2020 compared to the same time in 2019.

“It felt busy through Halloween but it didn’t feel busy after Halloween, so people were visiting more quietly in their own family bubbles,” Heineman said. “If you look back at the history of this whole pandemic, as long as hotels have been allowed to be open people have been visiting because they want to be at the beach, whether in a busy manner like last summer or in a quiet manner like last fall.”

Seaside has been working on marketing campaigns, including a year-long celebration of the 100th anniversary of the The Historic Seaside Promenade.

“Spring break is definitely here, we can all tell by the people roaming around town, especially when it’s nice out,” Paino said, adding he’s talked with several hoteliers who said their hotels were full. Some hotels were requiring two-night minimum stays, which indicates a busy time for booking.

“We have seen a greater number of people here than on average,” Paino said. The Cannon Beach Visitor Center also saw more people stopping in to pick up brochures or ask questions.

“We certainly see spring break as leading into the summer season and it’s a big bonus to our economy here in Cannon Beach,” Paino said.